Seoul In A Sandwich Review: Beef Bulgogi And Army Stew Sandwiches At Tampines 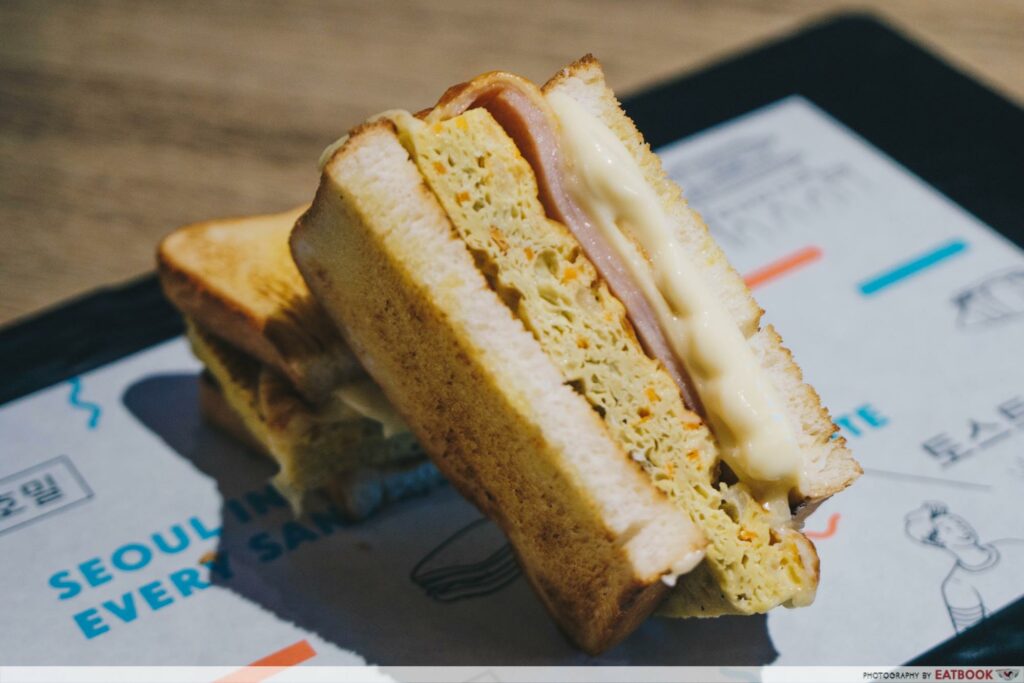 The hallyu wave shows no signs of slowing down and leading the next wave are Korean restaurants that have been popping up all over Singapore. Seoul in A Sandwich is the latest in the line of eateries dishing out Korean-Western nosh, and since the idea of an army stew sandwich is too tempting to pass up, we headed to their very first store at the newly reborn Century Square in Tampines.

Food at Seoul In A Sandwich 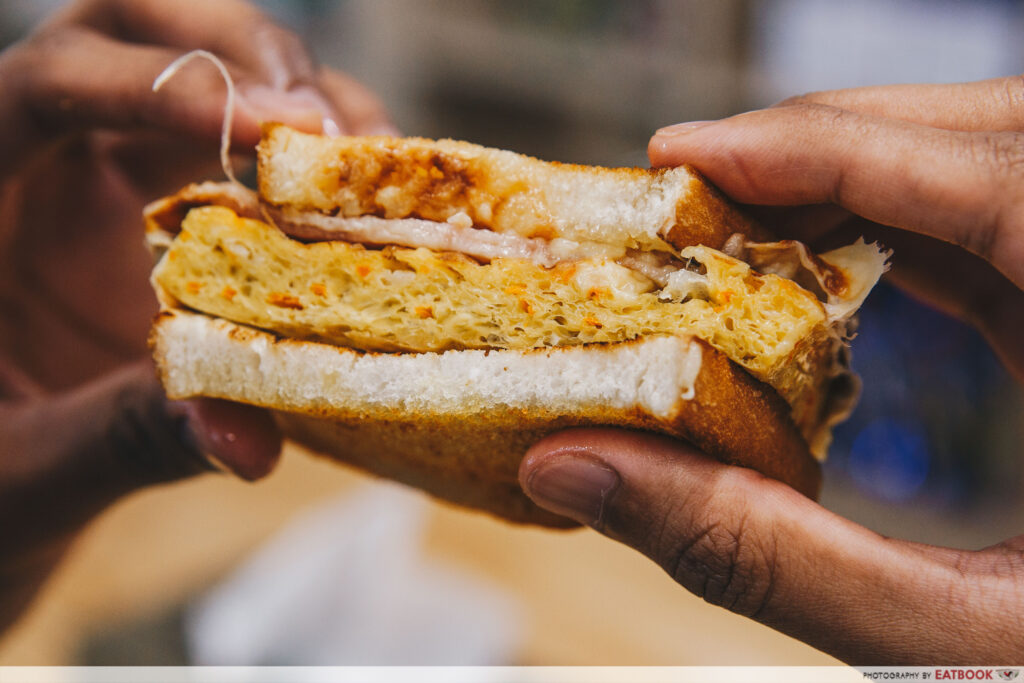 First up was the Seoul Street Toast ($6.50) – a white bread toast containing an omelette and slice of ham that’s blanketed by melted cheese. From the crisp exterior, I was half-expecting to bite into sawdust and fortunately, that wasn’t the case. Beneath the toast’s crunchy exterior was fluffy bread that gelled the omelette’s juiciness and cheese’s richness together. One bite of the Soy Garlic Chicken ($7.50) was all it took for me to fall in love. The burg was bursting with grilled soy garlic chicken chunks, so well marinated that meat juices were practically oozing out. 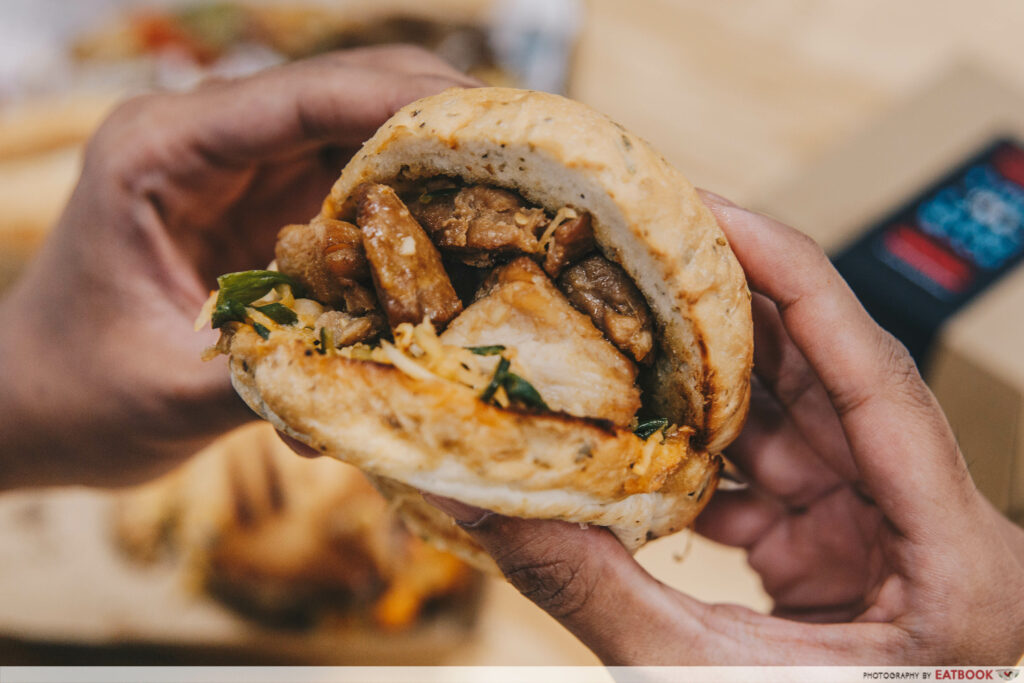 The herby taste of the focaccia meshed beautifully with tangy soy garlic, making this sandwich a literal explosion of flavours. Next was the eagerly anticipated Army Stew-ich ($8.50), which had quintessential army stew ingredients including luncheon meat, sausages, and tteokbokki, all densely packed between ciabatta bread.

I loved how generous they were with the cheese. That said, the sandwich could have used more dressing as the fillings were a little bland. 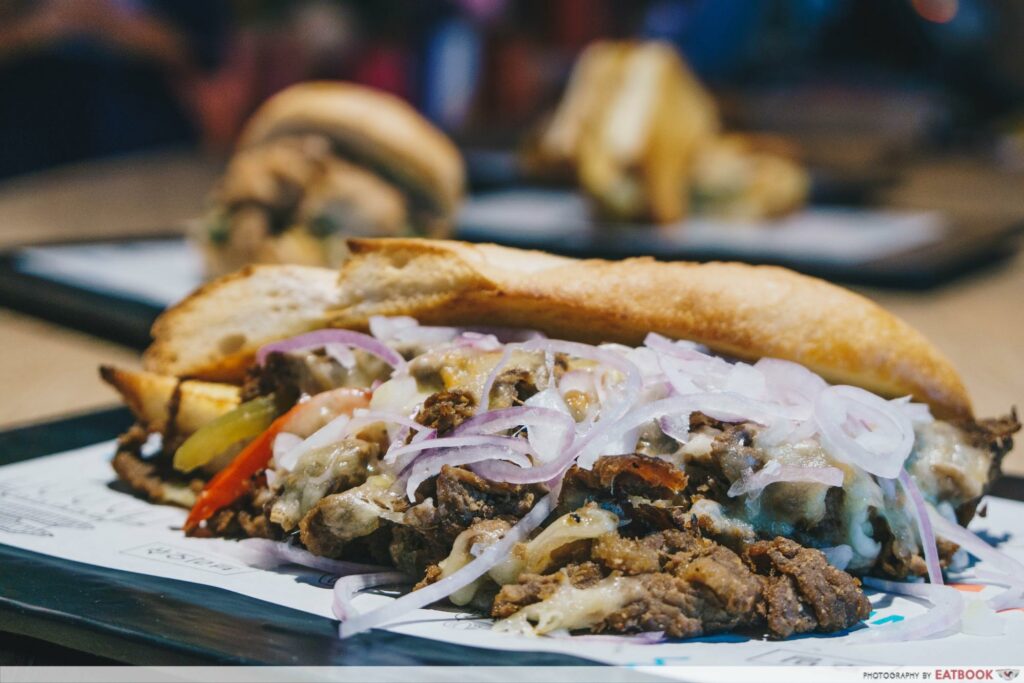 The last sandwich we had was the Bulgogi Cheesesteak ($8.50) – grilled bulgogi beef slices, blanketed with melted cheese, sauteed peppers and onions, and sandwiched between toasted baguette.

The main star of this toasty was definitely the bulgogi beef, as I could taste the slightly sweet and salty soy sauce enveloping the beef. A minor complaint we have is that the sandwich is too generous with onions as it overpowered the beef at certain sections.

Ambience at Seoul In A Sandwich Tucked at the basement of Century Square, Seoul In A Sandwich is a pick-up kiosk so don’t expect any seats there. That said, they have a very long counter space so you’ll have room to watch your sandwich make the pilgrimage from chopping board to oven to your hands. For those who like their sandwiches to go, Seoul In A Sandwich provides hearty sandwiches in lickety-split at just under $9. Highlights in their menu were the Seoul Street Toast and Soy Garlic Chicken. With fast prep time and generous portions, this is a place I’ll definitely visit the next time I need a quick carbo load in Tampines.

This was a media tasting at Seoul In A Sandwich. 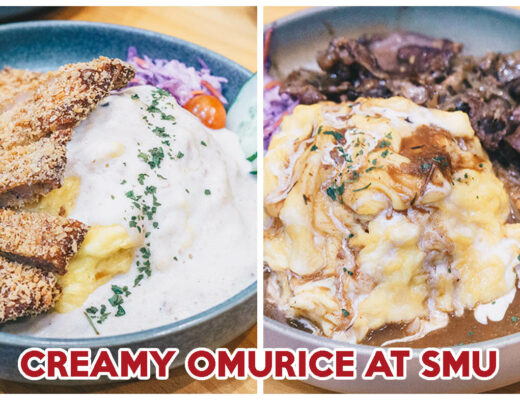 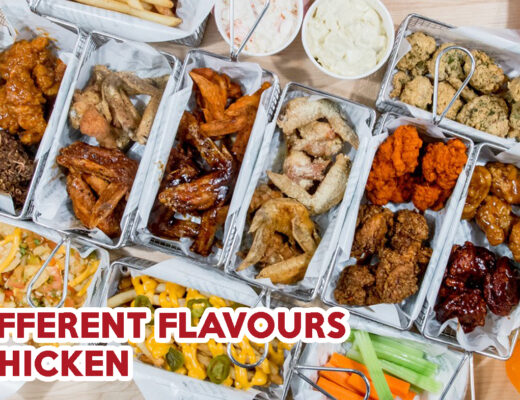