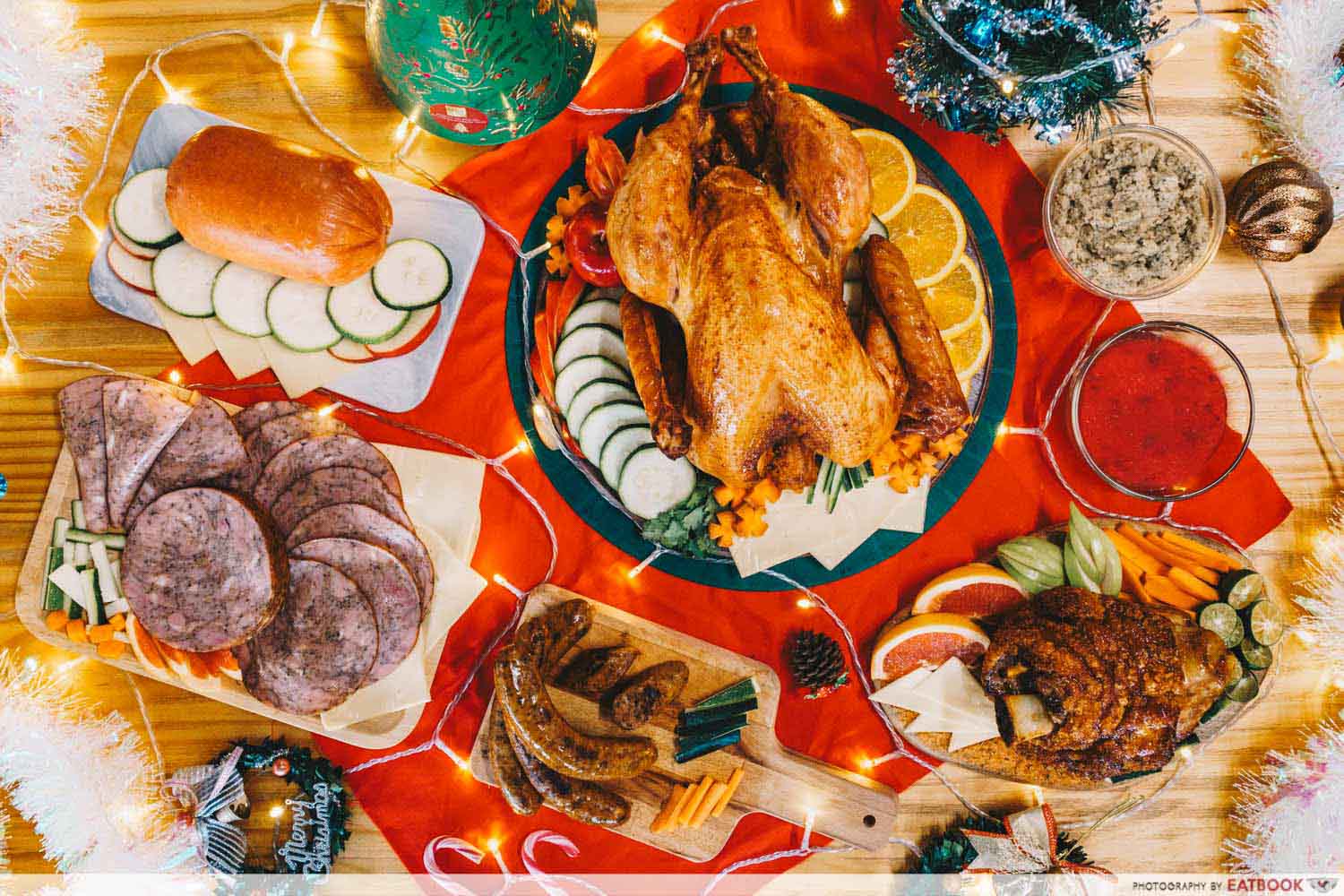 As the holiday season draws near, most of us are drooling in anticipation of our annual Christmas dinner with the family. We look forward to lavish tables of huge turkeys, savoury ham and roast beef, chocolate log cakes, spice-tinged gingerbread houses, and maybe even sumptuous cheese platters. I’m certainly no exception to these holiday cravings and was excited to get an early taste of Golden Bridge Foods’ Christmas feast, which was delivered straight to us. The Christmas Family Set (Roasted — Hot) costs $98.80 for the full package. It arrives warm and ready to be eaten, though you’ll have to pre-order it at least four days in advance. The hot set is accompanied by two bottles of free coke. You can also get the Chilled set ($76.80) if you prefer to heat it up yourself; it comes with heating instructions. Each set comes with free delivery and can feed 12 to 15 people, so it’s sure to satisfy the entire family! 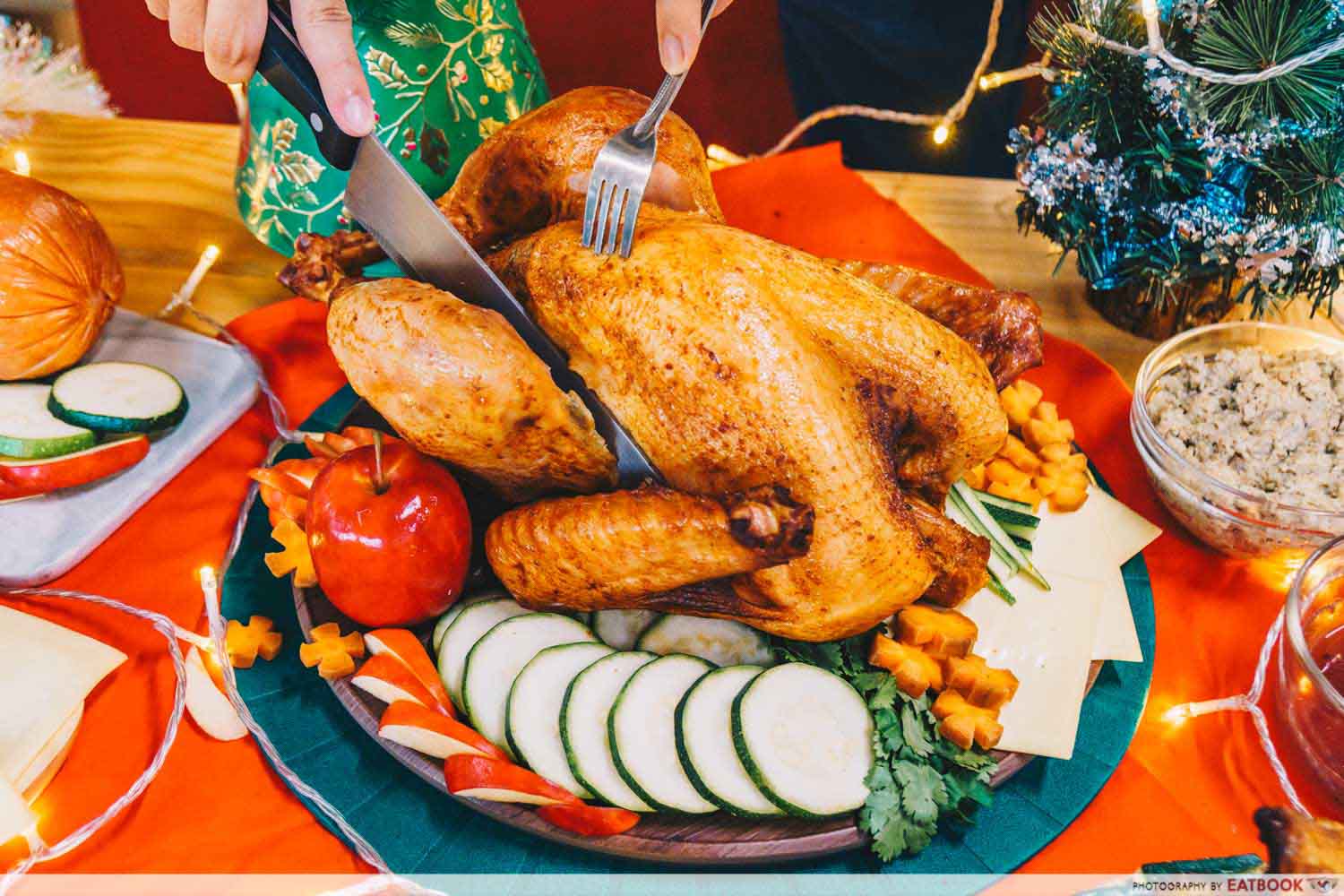 Each set comes with a turkey that weighs around 5kg before roasting. There’s enough for everybody to get a taste of the juicy, tender meat. With its enormous size and crispy skin, it had our mouths watering as we waited to dig in. 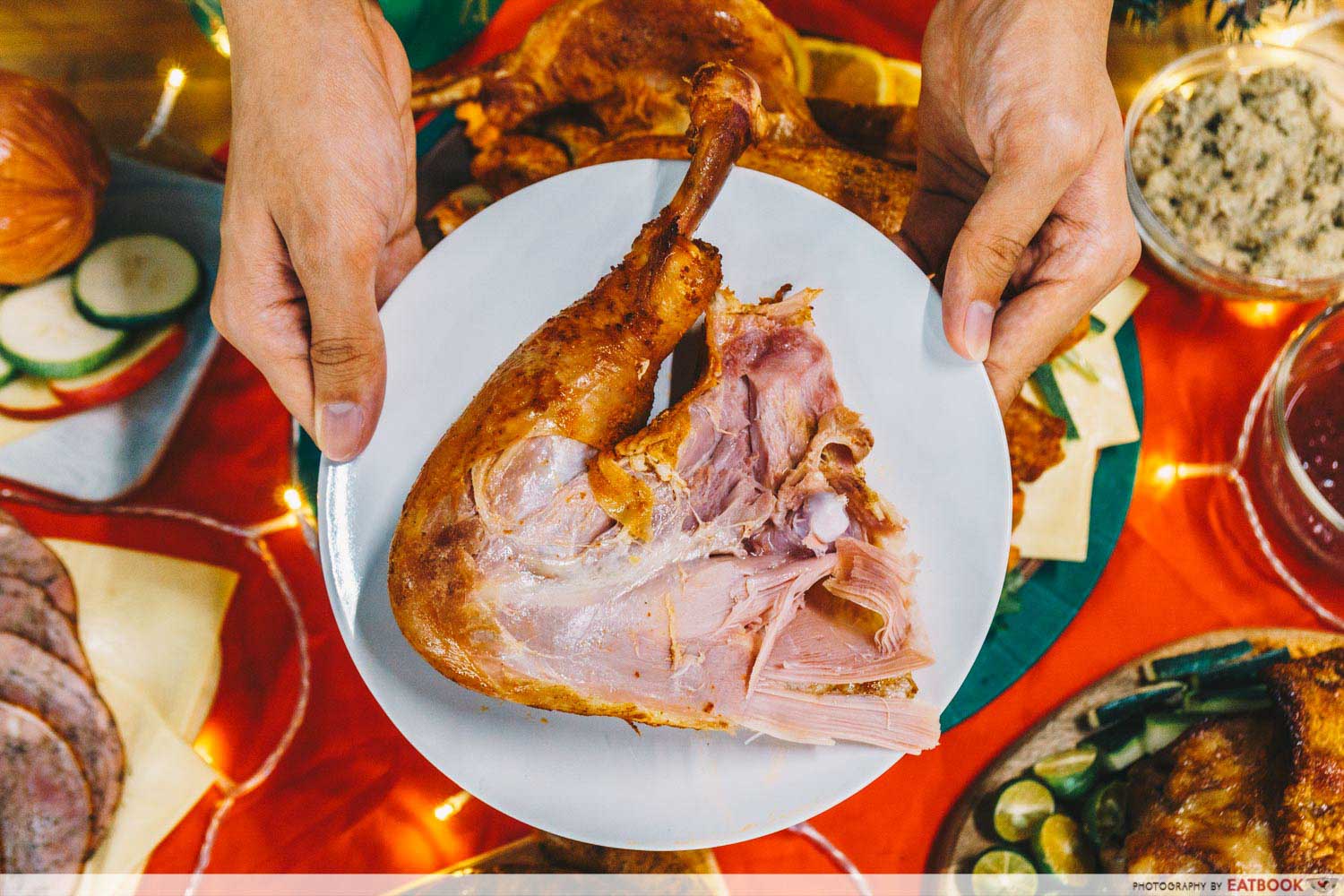 There was a rich, savoury-sweet layer of fat between the meat and skin. It was juicy and seasoned evenly, tender all the way through due to the thorough brining. The house-made spice rub was aromatic and fragrant, giving hints of paprika and pepper.

It wasn’t just the dark meat that retained the juices and texture. Even when we carved it wide open, the turkey breast was moist and tender, avoiding the common pitfalls of overcooked turkey. 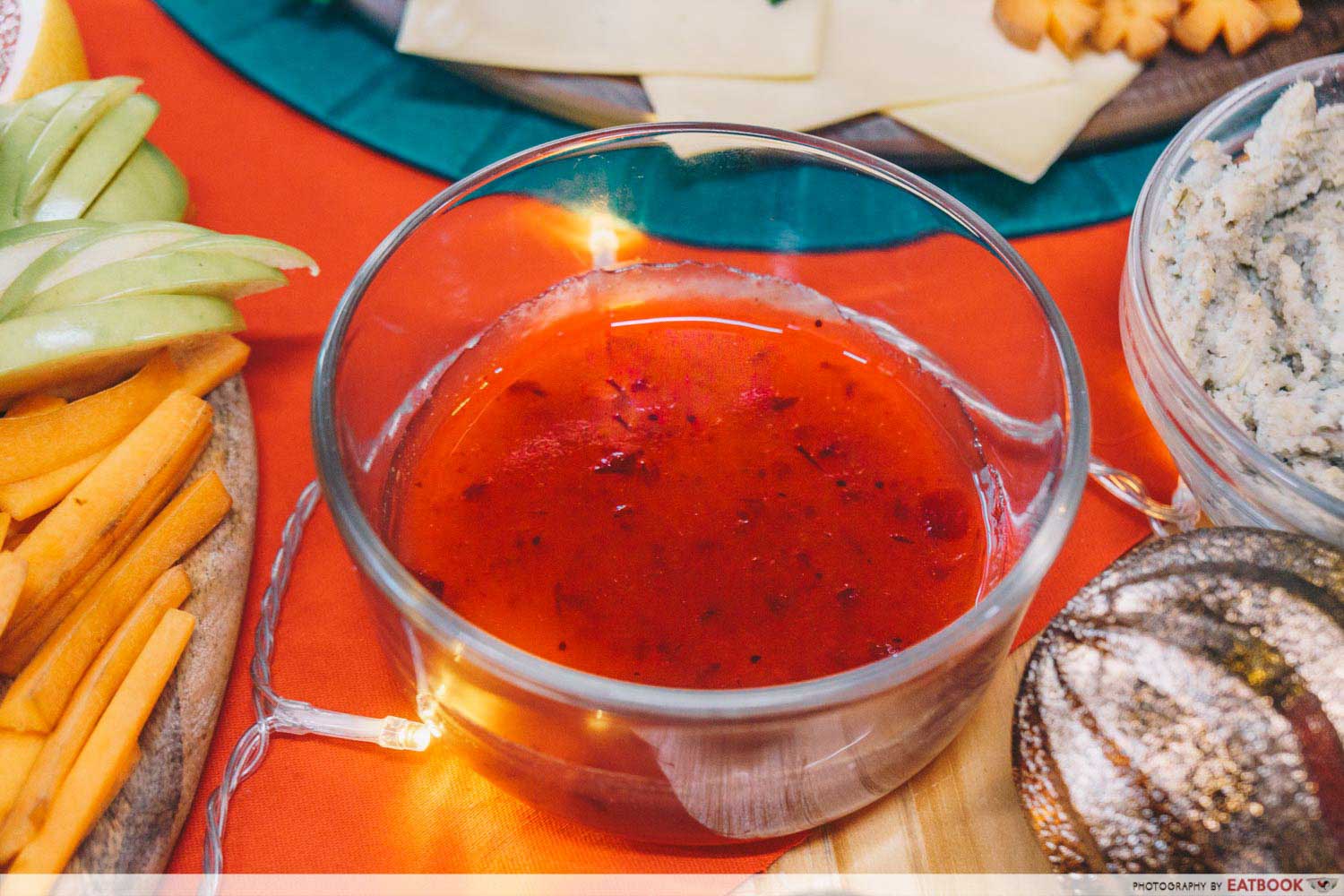 Turkey and cranberry sauce are a classic, iconic pair. The Christmas set comes with a packet of bright red sauce, which we heated up and slathered on the hefty chunk of turkey. Drizzling the meat with the sweet and fruity sauce gave it a whole new layer of taste. The tart flavours of the cranberry cut through the rich meat, helping to balance out the heavier flavours of the poultry. There was enough of the sauce for everyone to get a taste of it. The meal also came with a generous helping of chestnut stuffing, mixed with various spices such as thyme, rosemary, and Golden Bridge Foods’ in-house blend. 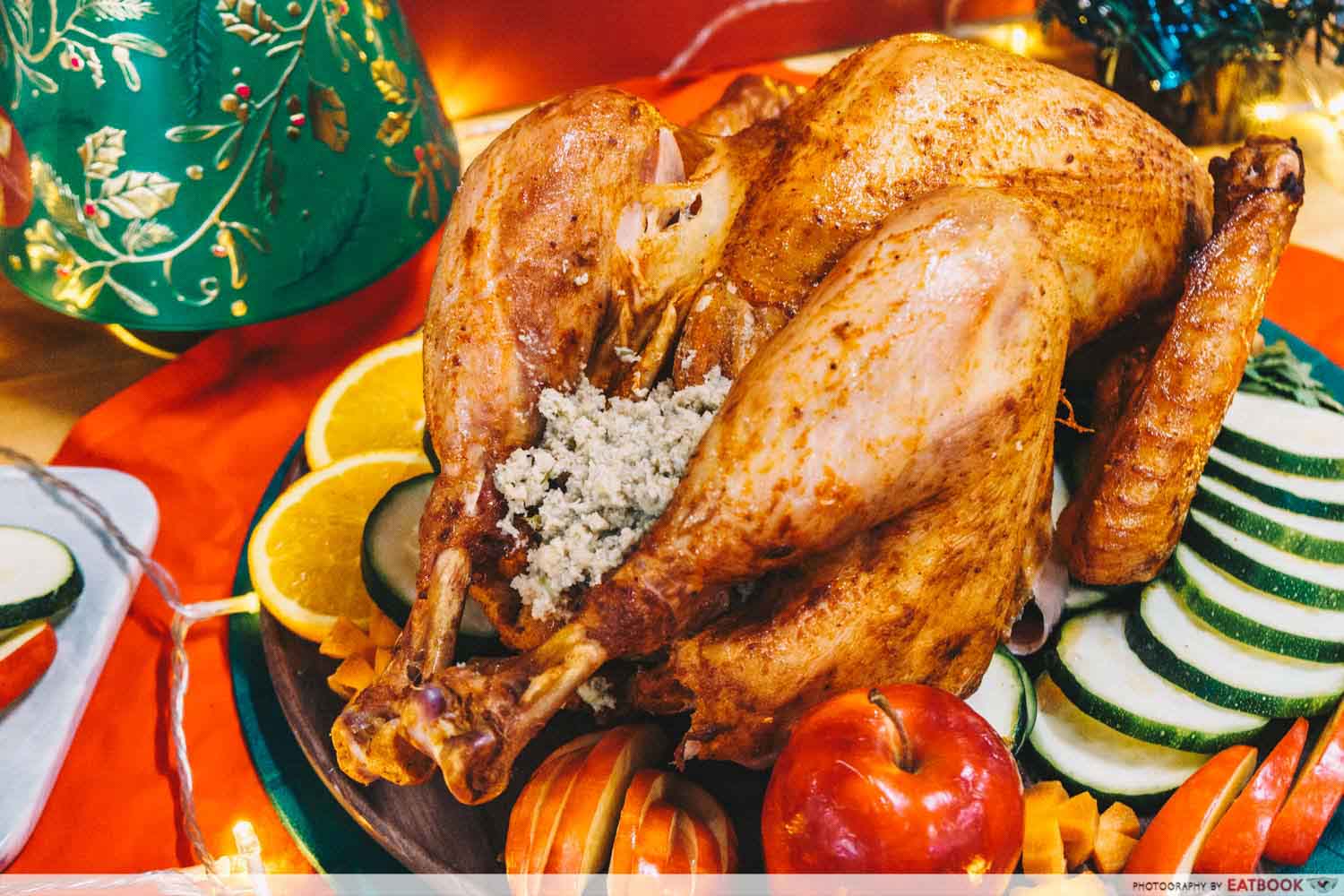 I could taste the sweetness of the chestnuts as I tucked into the chunky stuffing. It was nutty, fragrant, and just a little savoury. Although you can have your stuffing on the side, we preferred to put it into the turkey. While the cranberry paired its own fruity sweetness with the turkey, the chestnut stuffing played more of a supporting role, akin to rice, bread, and other carbs. 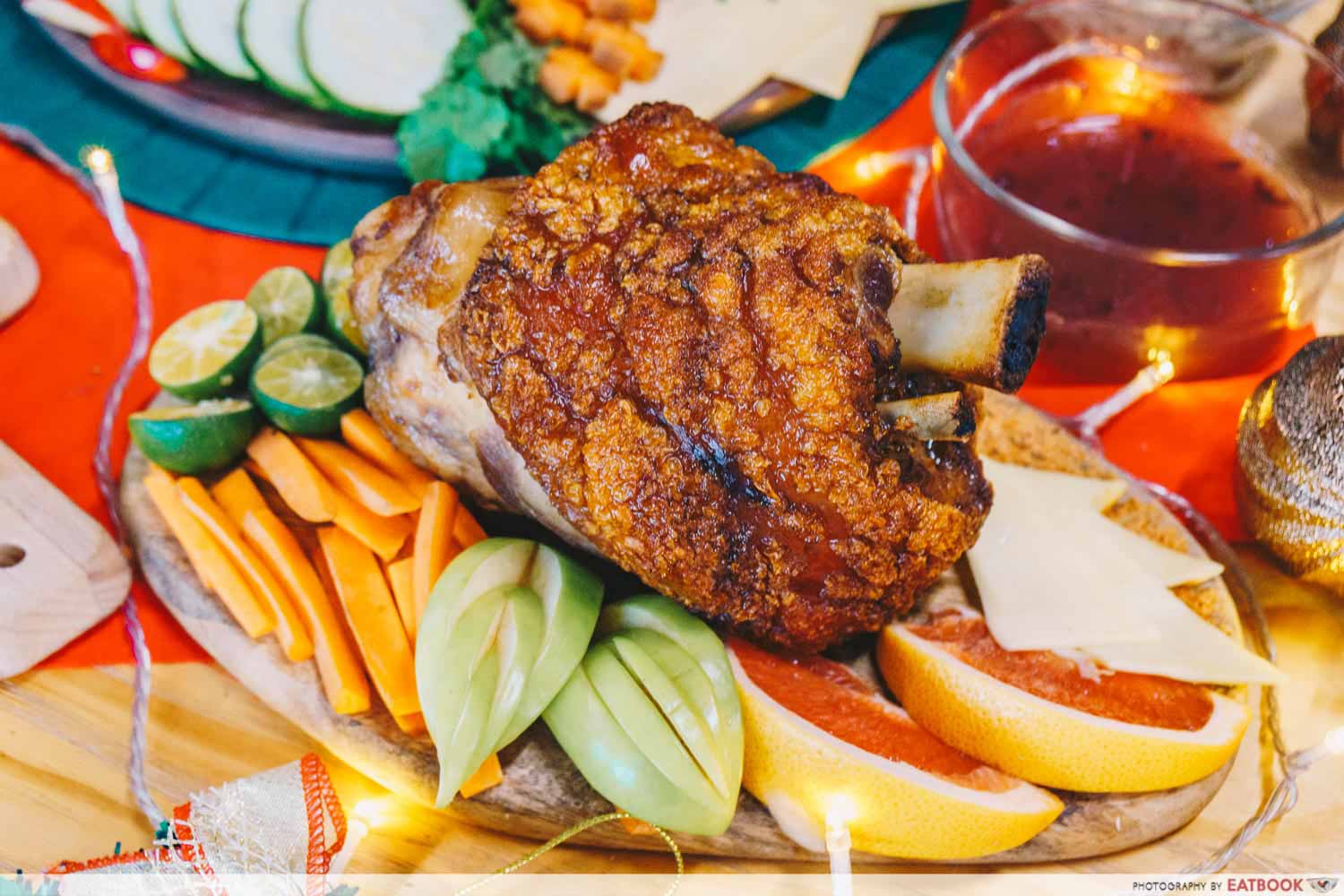 Also served was the German Pork Knuckle, covered in a coat of crackling and weighing an impressive 1.3kg before being roasted. The meat was charred lightly, with a caramelised crust formed over the glistening pork. It was marinated for at least a whole day before being cooked, allowing the meat to absorb the delicious flavours of the spice blend. 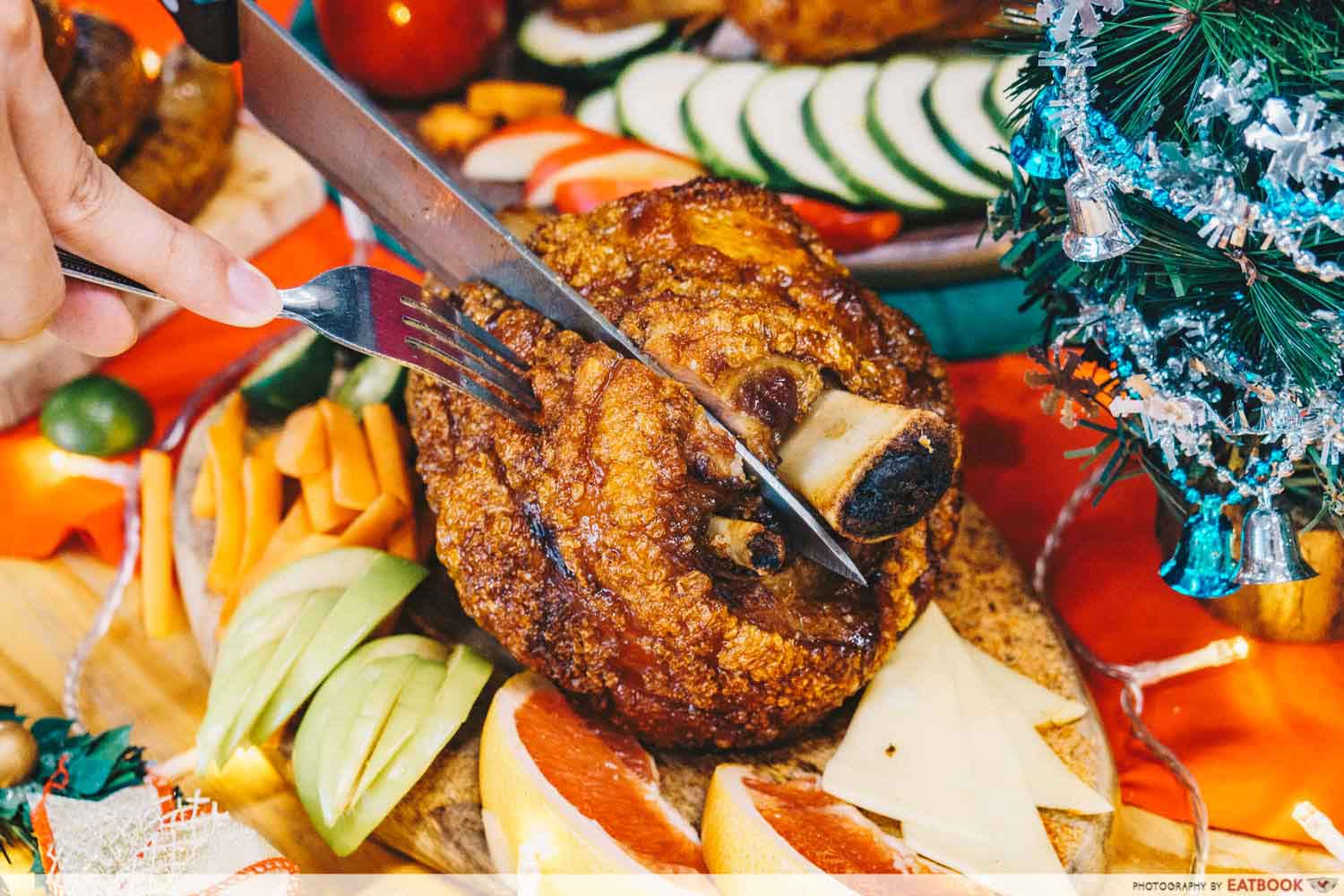 As we sliced into the skin, it shattered with a satisfying crack. The sound alone was proof enough of how crispy and delectable it was. Beneath the crunchy skin was tender, juice-filled meat, oozing with flavour and pairing well with the solid crust. While the main draw of the pork knuckle was the savoury crunch of the roasted exterior, the fork-tender and well-seasoned meat had me going back for seconds even after all the prized skin had been snatched up. 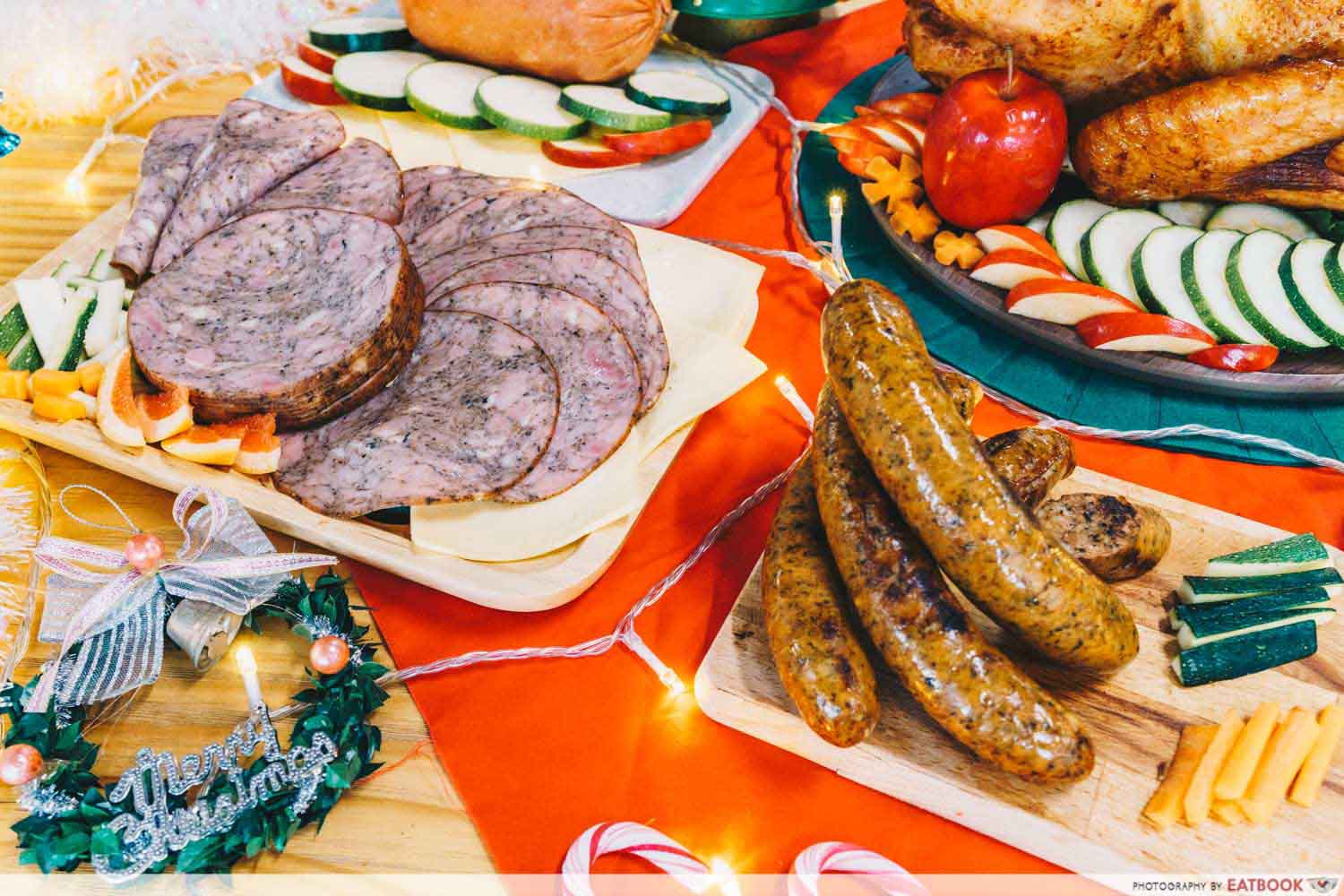 When you order the Christmas set, you get a choice between the Tuscany Truffle Ham and Tuscany Truffle Sausage. The sausage comes in a pack of five, and the ham is conveniently pre-sliced and ready to be split among a hungry family. 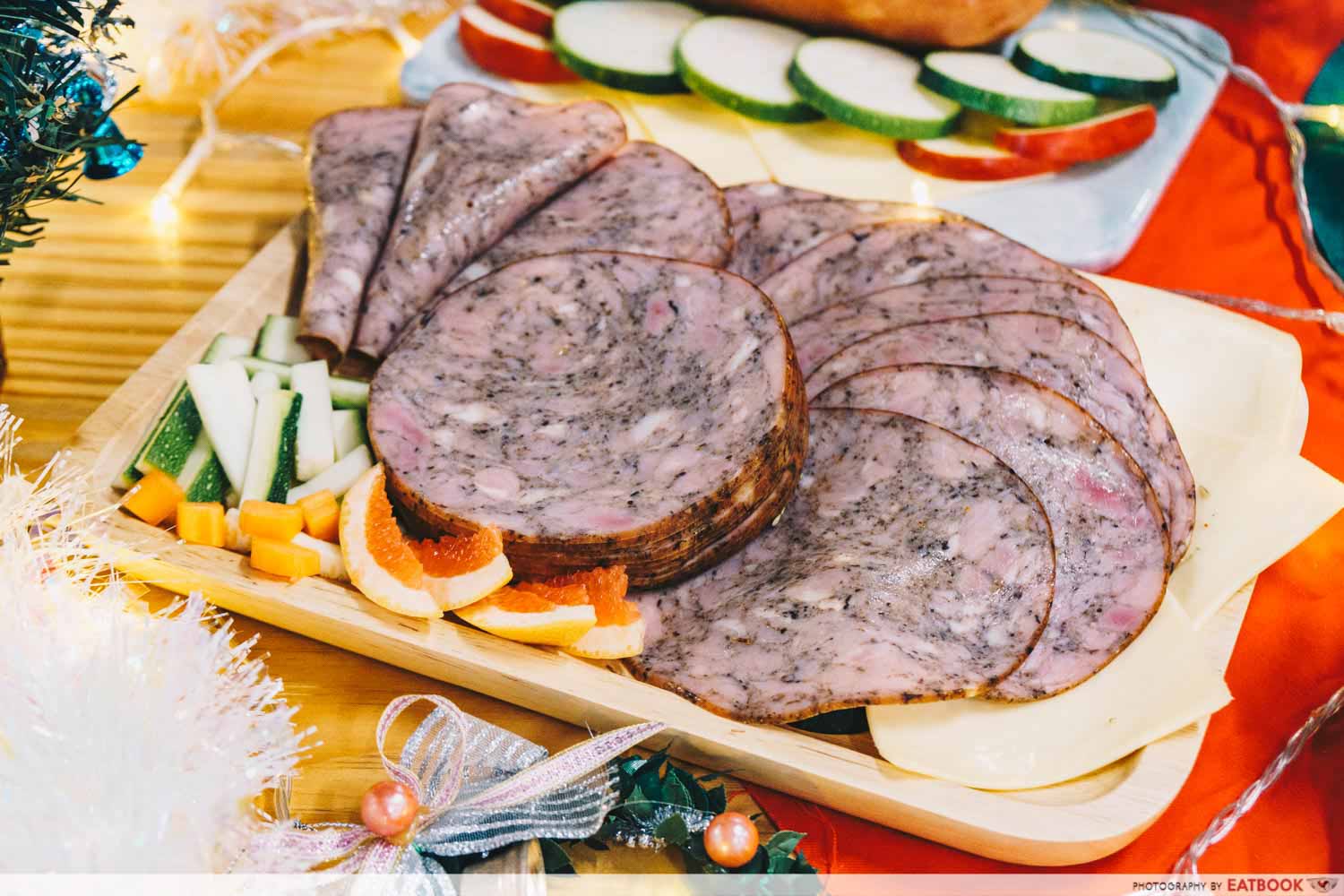 Even before we tasted it, the smell of truffle wafted off the thinly sliced meat. It fanned out into dozens of pieces, making for an elegant arrangement of cured meat. Up close, the ham almost resembled a slab of polished marble. Black streaks ran through the smooth pink meat, revealing the extent of the truffle flavour. The meaty tang of the ham was boosted by the truffle funk. We seared the truffle sausage in a pan first, to give it a light char and darker crust. They already looked plenty appetising on their own, speckled with little spots that could only be the black truffle. The sausage platter looked so juicy and appetising that I considered sneaking off a piece for myself while we were taking photos. Each was thick and promising, and the exposed meat inside was sizzling and steaming after emerging from the pan. 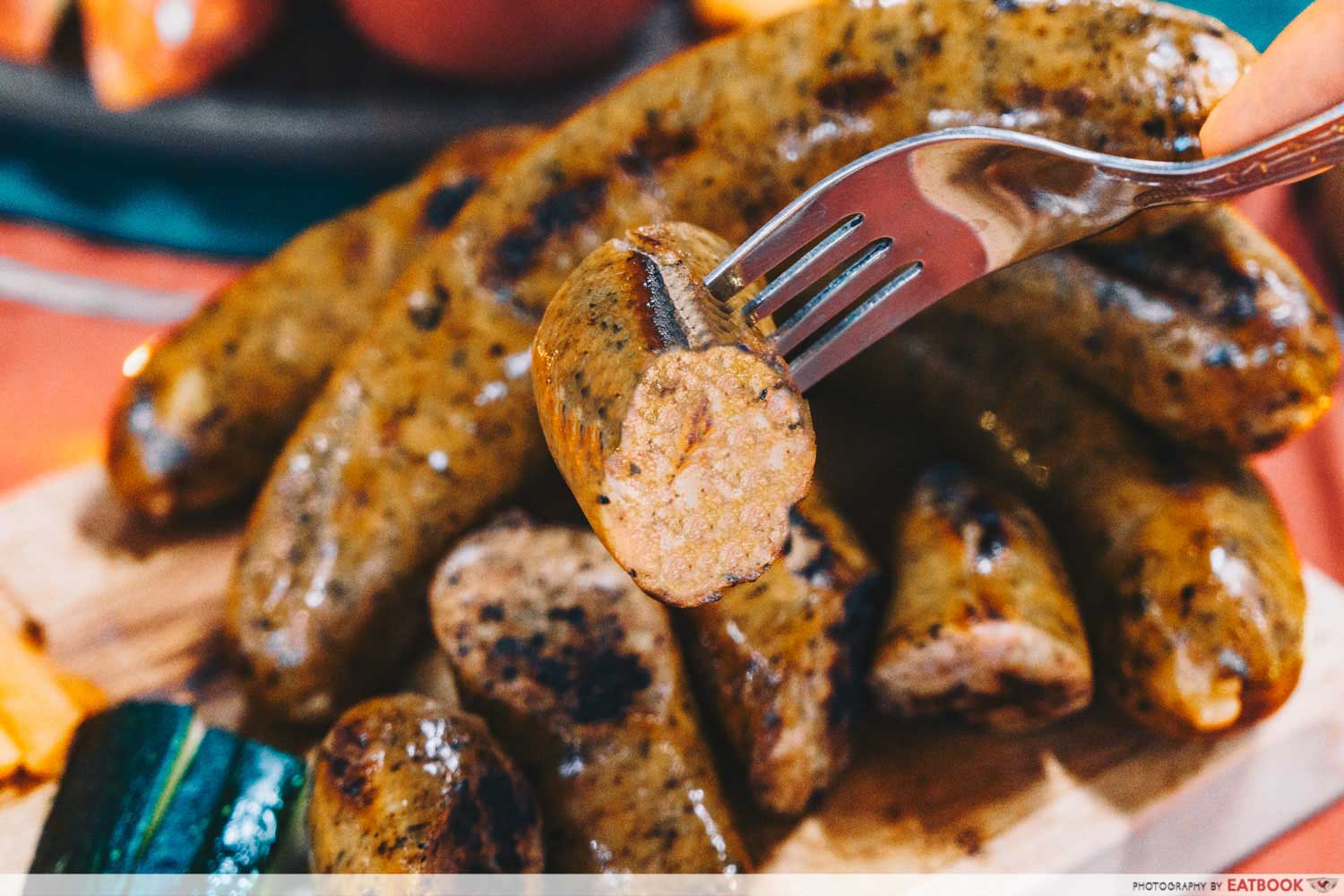 Compared to the ham, the sausage was a lot meatier, with a pleasant smoky aroma. The texture was a bit rougher than the ham. The sausage skin had a satisfying snap when bitten into, and the truffle taste shone through amidst the savoury meat flavours.

Both dishes were equally delightful, and the earthy tones of truffle were obvious in them. If it came down to it, I would pick the ham. The slices of savoury and lighter meat appealed to me a little bit more. 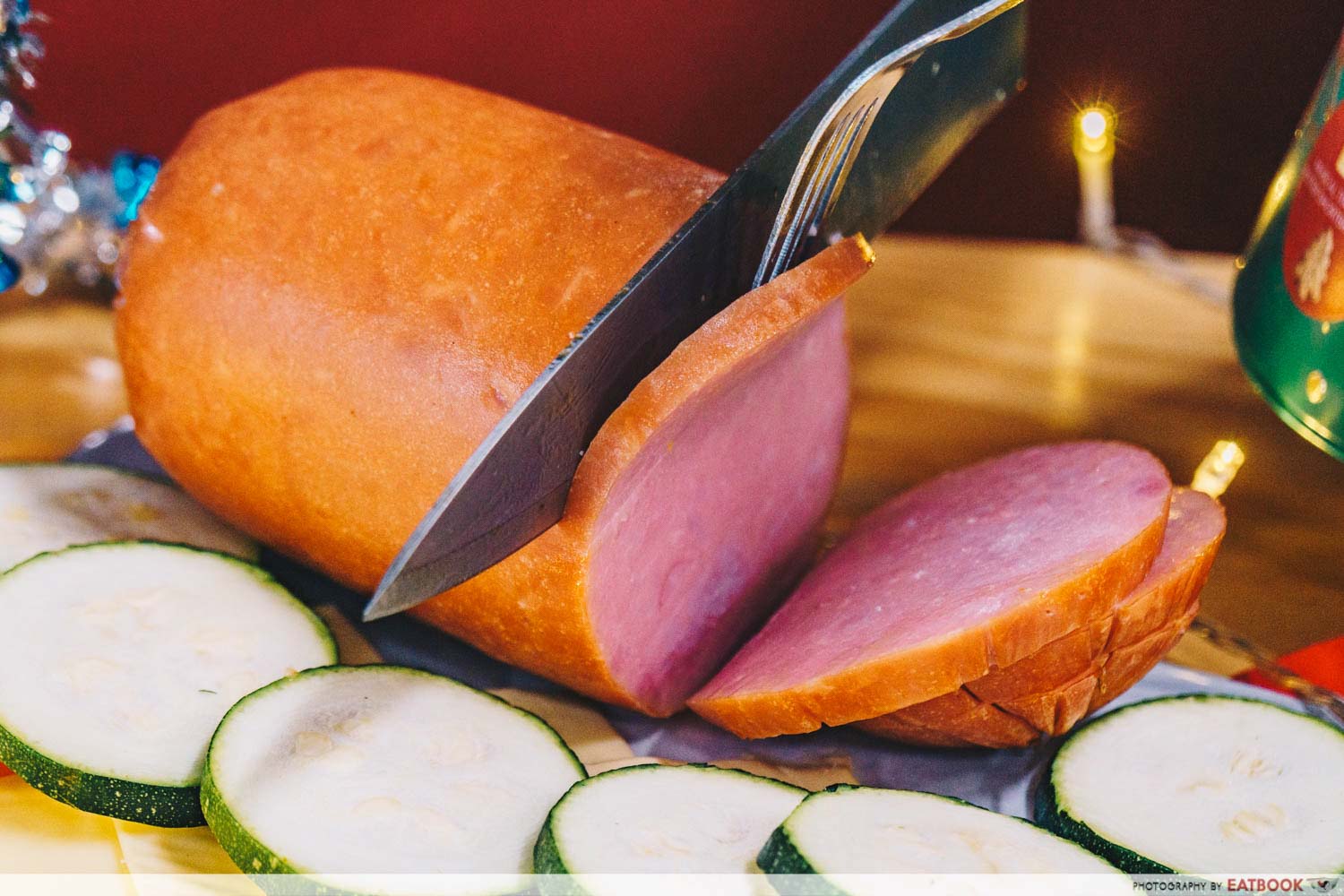 A limited number of early birds who order the hot set can get a whole Honey Baked Ham by ordering through Qoo10 or Shopee. While it isn’t as luxurious as its truffle-flavoured cousin, it comes in a larger portion. The ham has a sweet coating on the outside and boasts a honeyed taste.

Among the spread of meat, the turkey was my favourite. It was juicy and well-seasoned all the way through. It’s a bit hard to get turkey right at home, so I genuinely appreciated how it was evenly flavoured. The pork knuckle came a close second, with its crackling and delectable fats. Christmas is a time to spend with family and friends. If you don’t have the time to whip up a full meal and would have a banquet delivered right to your doorstep, consider ordering one of these Christmas sets. All you have to do is pre-order online from 2 to 19 December 2019, and wait patiently for dinner to arrive. Be sure to order at least four days in advance!

Delivery is arranged from 16 to 24 December 2019, and you can also head down to Golden Bridge’s factory on those dates to pick the set up directly!

Get your Christmas Family Set on Shopee & Qoo10

Photos taken by John Lery Villanueva.
This post is brought to you by Golden Bridge Foods. Marks & Spencer Lets You Up Your Xmas Party Game With Cheese Platters, Premium Deli Cuts And Meats From NZ 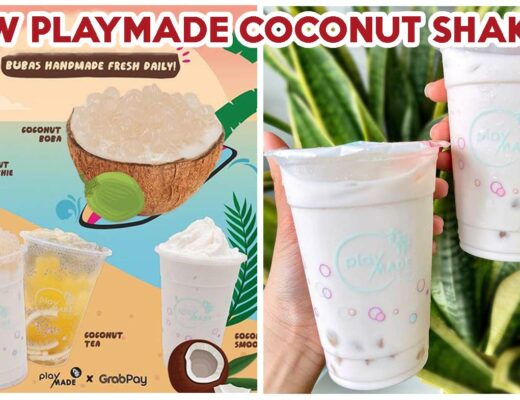