Just like many Singaporeans, I often seek a getaway from our hectic city. Ever since I turned 16, my parents have always made sure we go for bi-monthly trips to Thailand to take a break as a family. Thailand has since gotten a special spot in my heart because of her culture, people, and most importantly, delicious food.

You don’t need to visit fancy restaurants to get tasty food in Thailand. Just along the streets, you’ll be greeted by an array of mouthwatering street food. While we don’t have any roadside stalls selling Thai food in Singapore, you can head to Thai Super Bowl in Hougang 1 for their gigantic tom yum hot pot on days you need some comforting fare. Their signature Thai Super Bowl ($36) is meant to feed four to six people. It was served on a rectangular hot pot that was bubbling away when it arrived. The dish had prawns, mussels, instant noodles, meatballs, crab sticks, squid, minced chicken, and two freshly-cracked eggs soaked in a tom yum broth.

The tom yum soup base here is simmered for at least an hour and a half before serving. Their Thai chef makes the broth from scratch every morning, using a tom yum paste imported from Thailand.

The broth had a savoury-umami taste that kept me going back for more. Upon first sip, I was bracing for a fiery kick, but that never came. Instead, the coconut milk brought a nice creaminess and balance to each mouthful. Do note that the soup might dry out and get a bit salty if left bubbling for too long. They do not serve free refills for the soup, but you can always request for one at an additional $3. The prawns were smaller than I expected, but their flavour did not disappoint. Each prawn was juicy and firm to the bite, while retaining some natural sweetness. Since they was simmered in the broth, the heads of the prawns were packed with flavour too. The plump mussels came off their shells with a gentle tug. Even though the meat didn’t take on the flavour of the broth, I was still quite satisfied with this briny goodness. The squid was chewy and tender, nothing like some rubbery ones I’ve had elsewhere. A generous amount of frozen crab sticks and meatballs were also in the hot pot. Besides the pile of seafood offered, I was glad to find some meat in the hot pot as well. The minced chicken was marinated well, and having it together with the tom yum broth definitely took it up a notch. There were also two eggs cracked into the broth. Stirring them into the bubbling soup made the broth creamier. 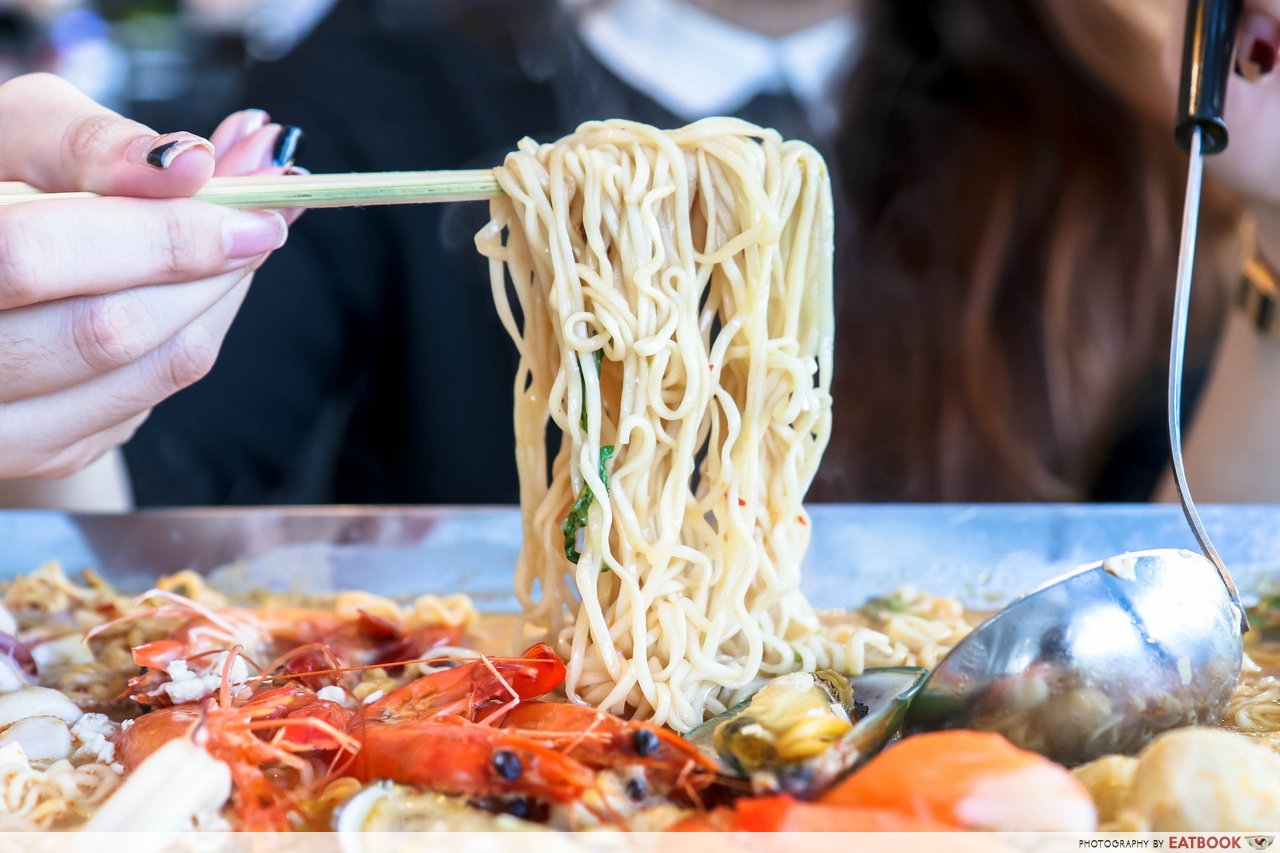 To guarantee a filling meal, six packets of instant noodles were dunked into the pot. I myself had close to a whopping four bowls, but there were still plenty to go around. Unfortunately, the noodles got slightly soggy after being in the soup for too long, so scoop them out from the broth early to let them retain their springiness. To quench your thirst, get yourself a cup of Thai Iced Tea ($1.50). The tea dust, creamer, and evaporated milk used are all imported from Thailand. The drink was rather milky but had a good balance in terms of sweetness. We heard the owner brews the tea for over an hour every day!

Alternatively, opt for a refreshing cup of Lemongrass Tea ($1.50). Made from fresh lemongrass, this had an aromatic scent. That being said, the taste of lemongrass was very subtle. Between the two drinks, I’d go for the Thai Iced Tea. Located just outside of Hougang 1, this well-lit place is pretty hard to miss. It is air-conditioned, so you won’t have to worry about perspiring after indulging in all that piping hot seafood and instant noodles.

The restaurant is relatively spacious and can accommodate large groups of people. We managed to get a table easily when we visited at around 2pm on a weekday. There are a few buses from Hougang MRT Station that can take you here in approximately 20 minutes. Even though the ingredients used were not particularly outstanding, I’d definitely return for the broth. If you want something different from Thai mookata at your next group outing, this would make a great alternative. For more ideas on where to go for your next group outing, check out this giant white beehoon or these giant meat platters!

Pros
– No GST or service charge
– Offers a unique dish

Operating Hours:
Daily 11am to 9pm