Bulmawang The Devil Of Fire Ramen 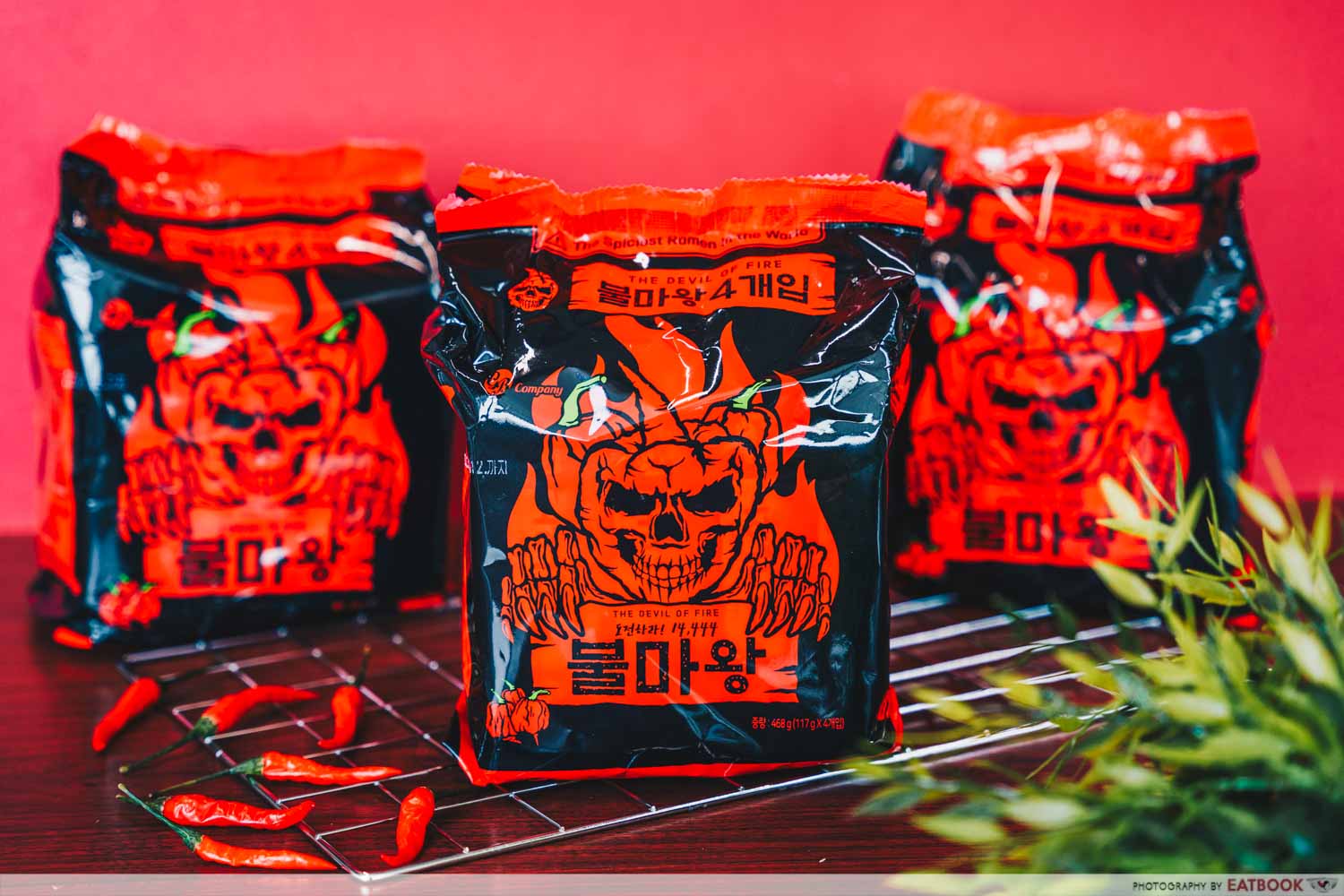 I will never brag about being a champion when eating spicy food, but like most Singaporeans, I am a glutton for punishment when it comes to mind-numbing, mouth-searing, te la-level spice. So, when the Bulmawang The Devil Of Fire Ramen popped onto my radar, the first thing I said was, “gimme gimme”.

It claims to be the spiciest ramen on earth right now, rivalling even Samyang’s 2x Spicy Fire Ramen and Mamee’s Daebak Ghost Pepper Spicy Chicken Noodles. Currently making its rounds on Korea’s mukbang circuit, many videos feature mukbang-ers at the verge of ugly tears as they work their way through a bowl. What makes the Bulmawang The Devil of Fire Ramen earn its stamp as the spiciest instant noodles in the world is that the broth is made with the world’s hottest pepper, the Carolina Reaper. This is the first instant noodle in Korea to use the chilli in its recipe.

The Carolina Reaper comes in at a whopping 2.2+ million Scoville units (SHU), so its use in this devilishly spicy instant noodles gives each packet a ranking of 14,444 SHU. As a basis for comparison, Samyang’s 2x Spicy Fire Ramen is a mere 8,706 SHU, while the reigning hottest ramen, the Teumsae Ramyeon, only comes in at 9,413 SHU. 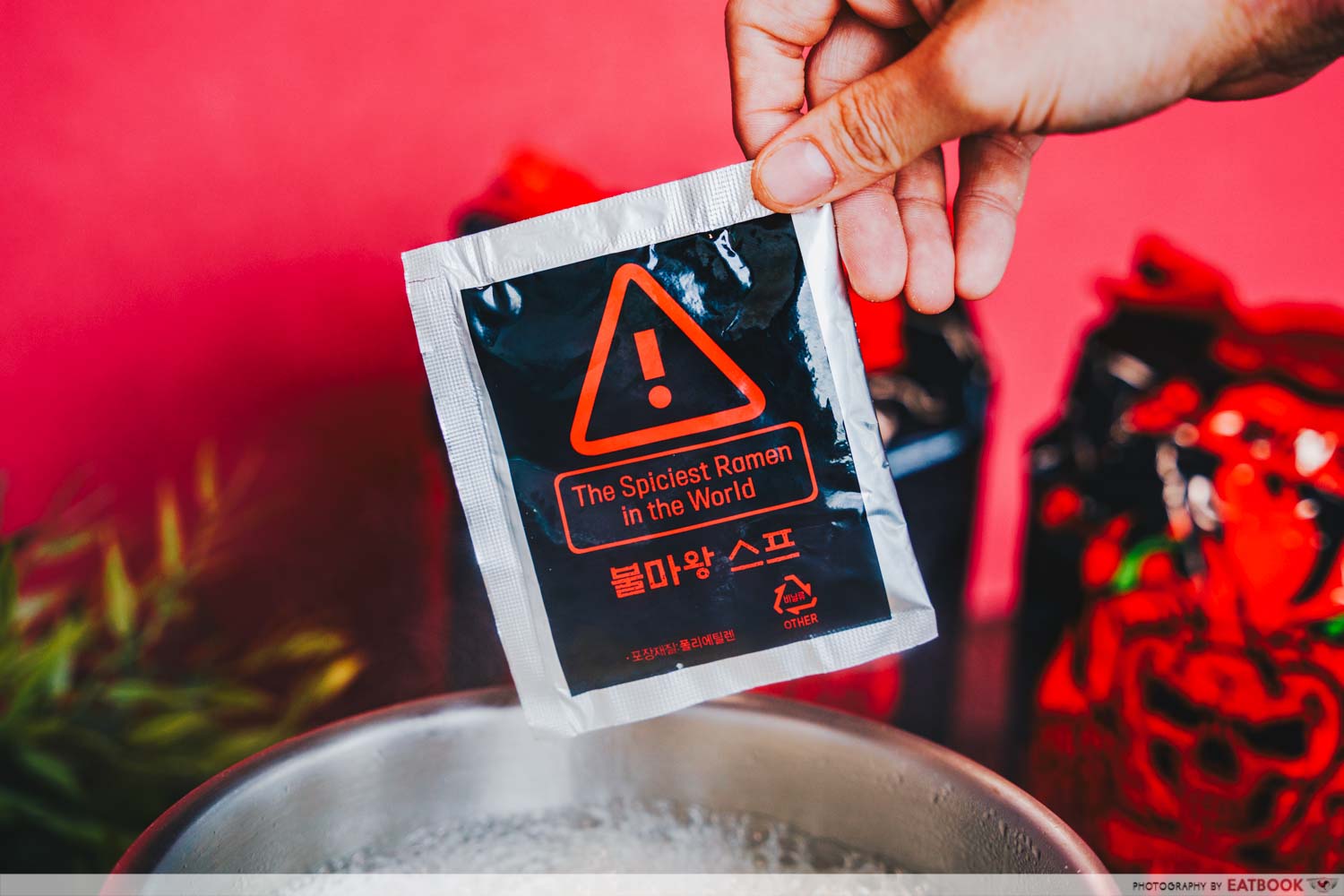 Before I give the lowdown on the taste, let me set the scene for my spice tolerance. I thought I was good. TMI, but even though the regular Samyang noodles put me on the toilet for days, I wiped my bowl clean. I get sweaty when faced with tom yum, my face turns red, but it’s all manageable. 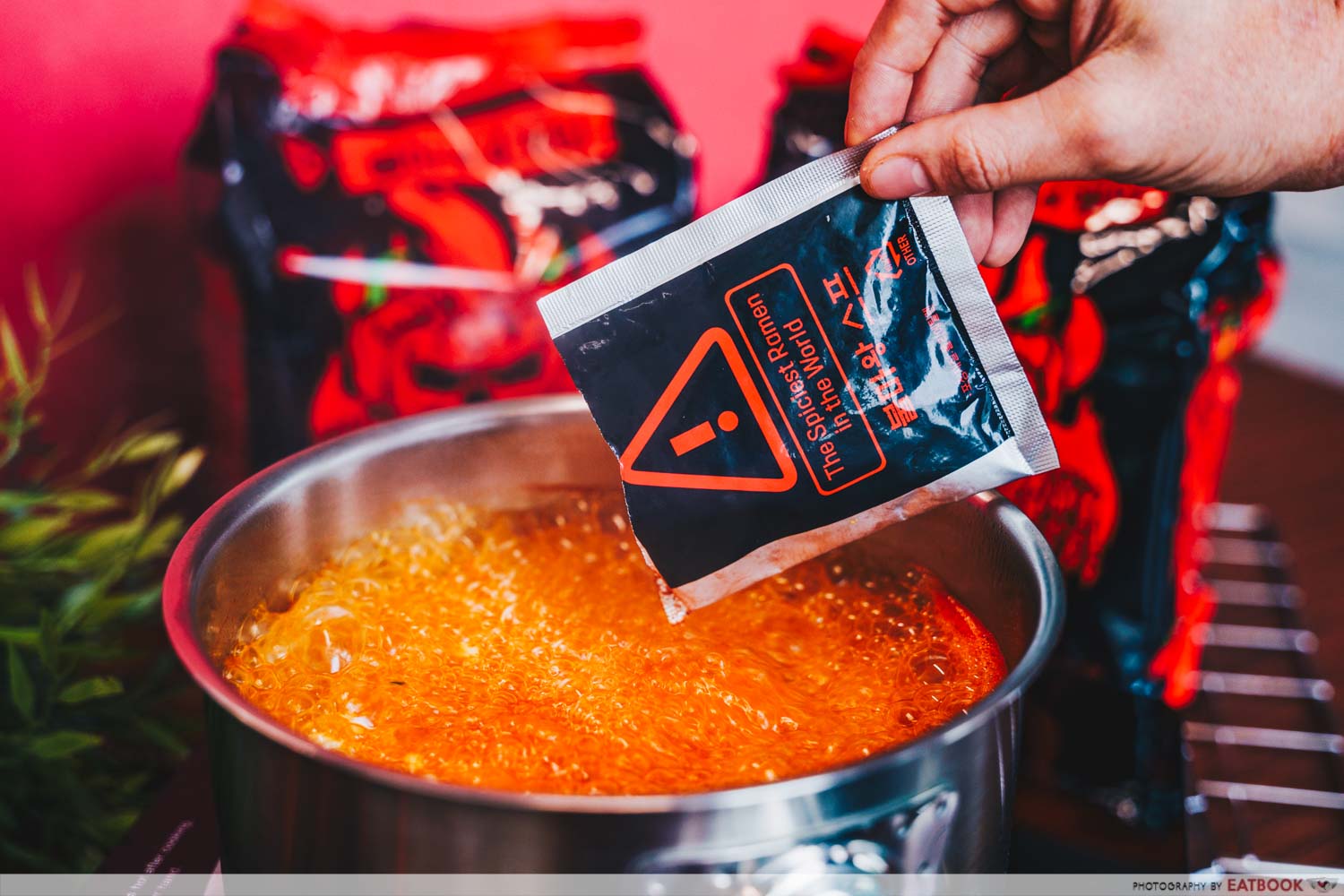 This ramyeon put me to shame.

Looks are definitely deceiving, as a bowlful of Bulmawang looks like every other regular spicy Korean instant rameyon you find. The noodles themselves were springy, thick, and QQ. The broth is a bright orange, but it had not much of an aroma. 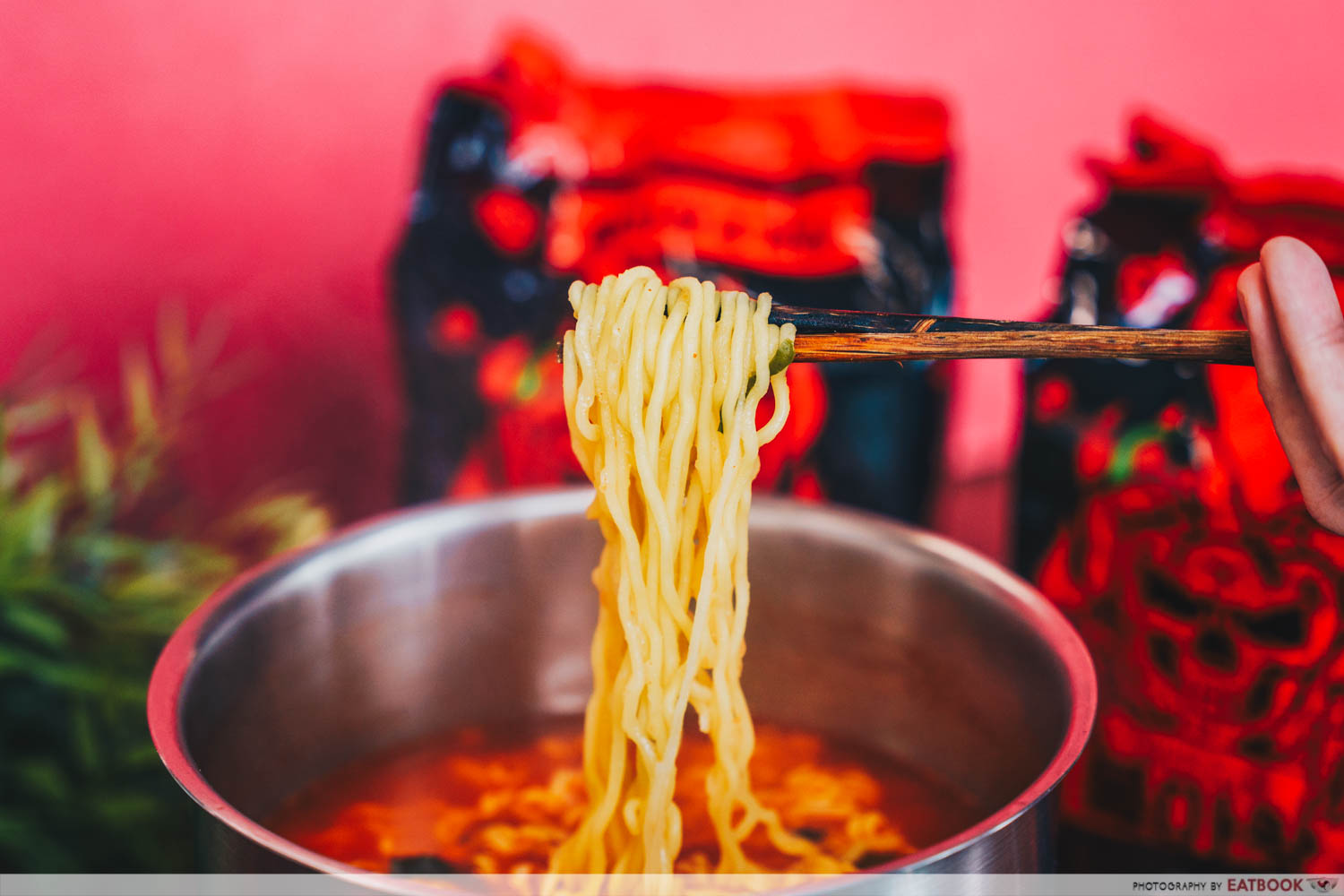 One bite, though, and it hurt. I flushed pink, knees weak, arms spaghetti. My hand began to shake.

It is the kind of spice that is very heavy on the pepper. It stings, and it doesn’t get better as time passes. In fact, it gets worse. For a good minute after, I was whinging about how much my tongue hurt, and iced water did not help one bit. 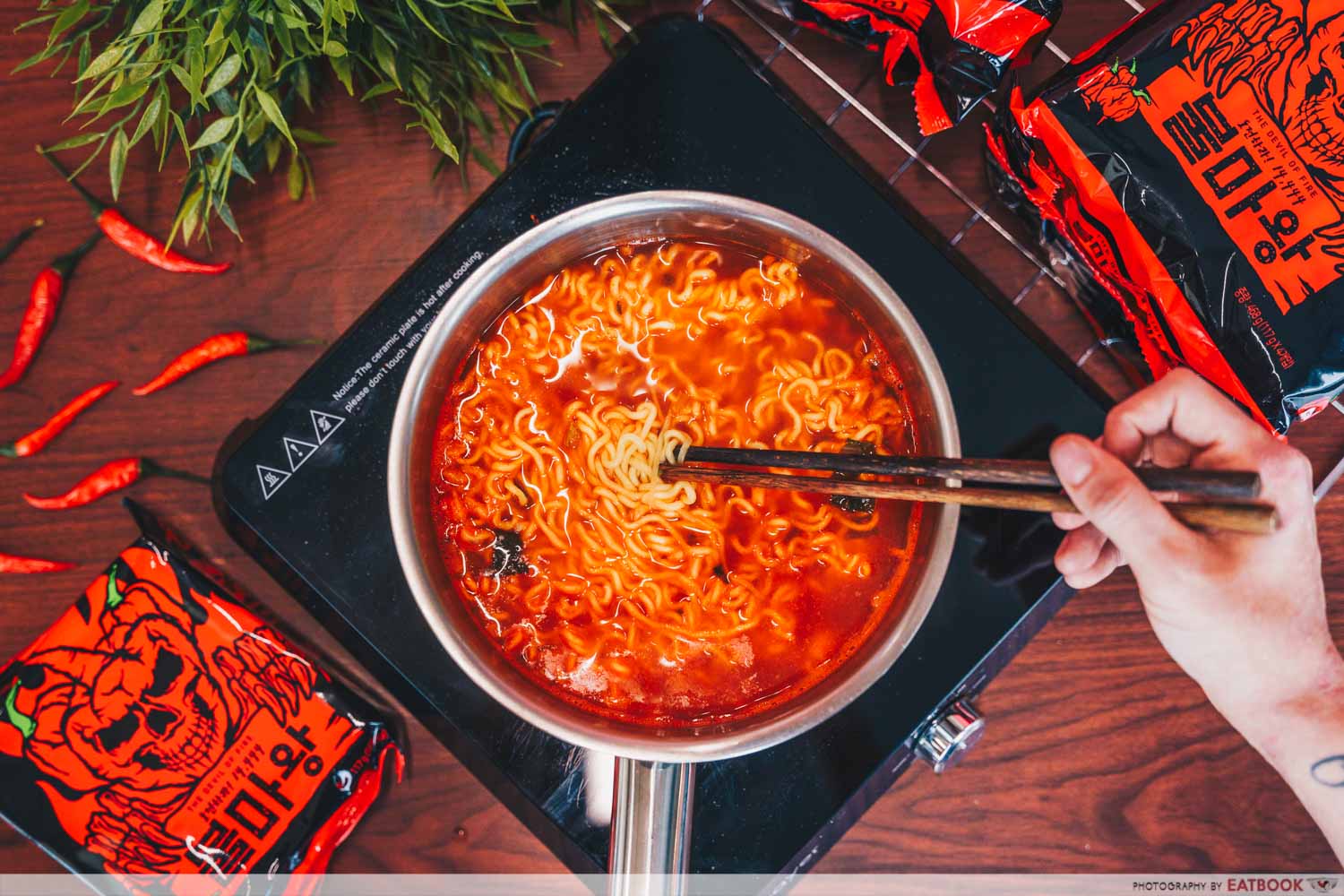 But that’s just me. To get a better sense of things, I went around the office with my colleague, beckoning for people to try a bowl too, and these were some reactions we got:

A: “No kick leh, this is a disappointment.”
B: *violent coughing* “Why are you doing this to me?”
C: “It’s like having bbudae jjigae, but you spam lots and lots of pepper in it. The spice is more peppery than fiery, I feel.”
D: *loud, loud cursing at first bite* 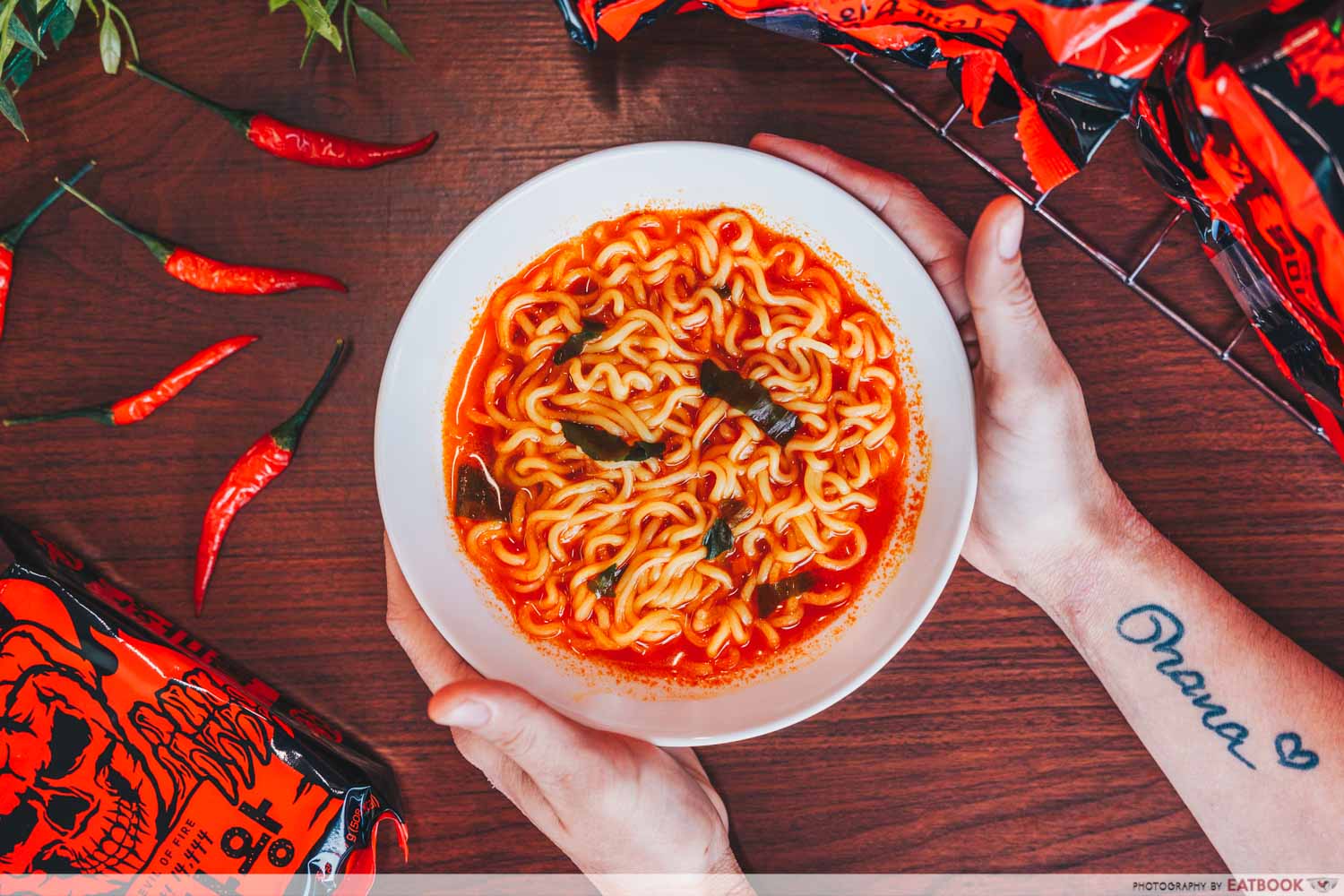 Reactions were definitely mixed, so it’s still a toss-up as to whether these are uncontestably the spiciest noodles on earth, for now. To me, though, two things were made abundantly clear: I am a baby when it comes to spice these days, and that you ought to try this for yourself to decide if it deserves its title.

The Bulmawang The Devil Of Fire Spicy Ramen is available for $10.90 for a pack of four on Shoppee.

For more Korean instant noodles that won’t cause you as much pain, check out our take on the Nongshim Army Stew Ramyeon. Relive some painful memories with us too as you watch our episode of Eatbook Vlogs, where we tried the ghost pepper noodles. 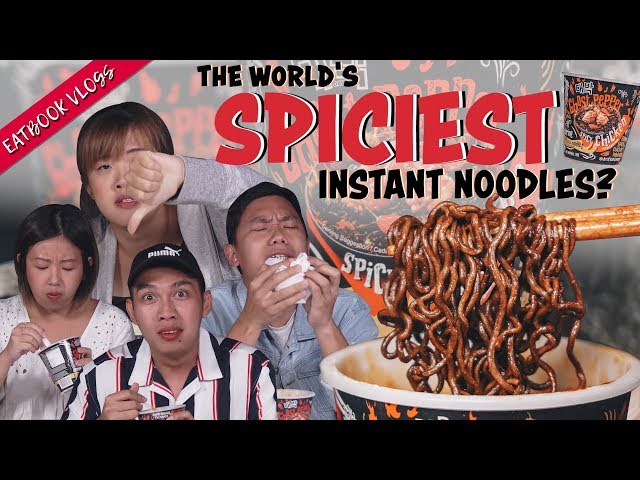 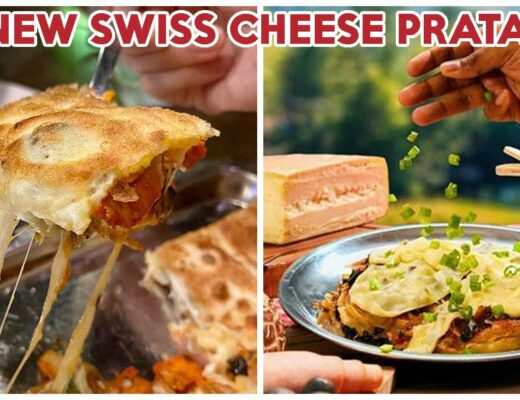 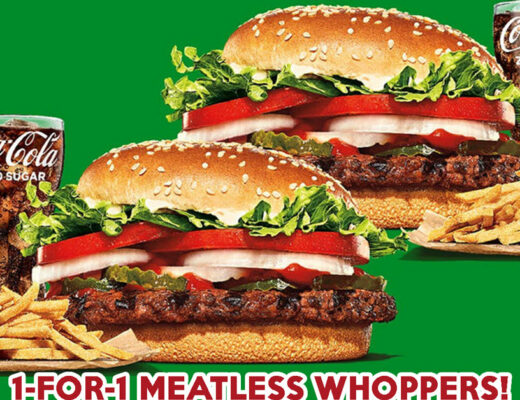 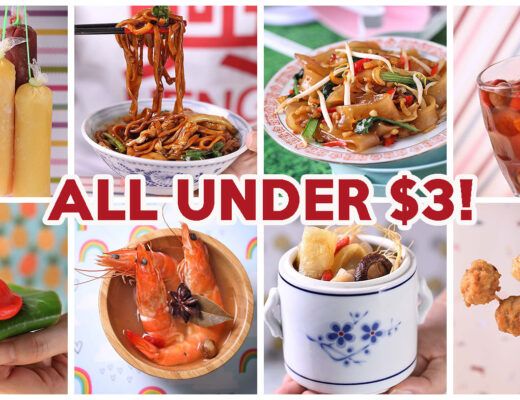