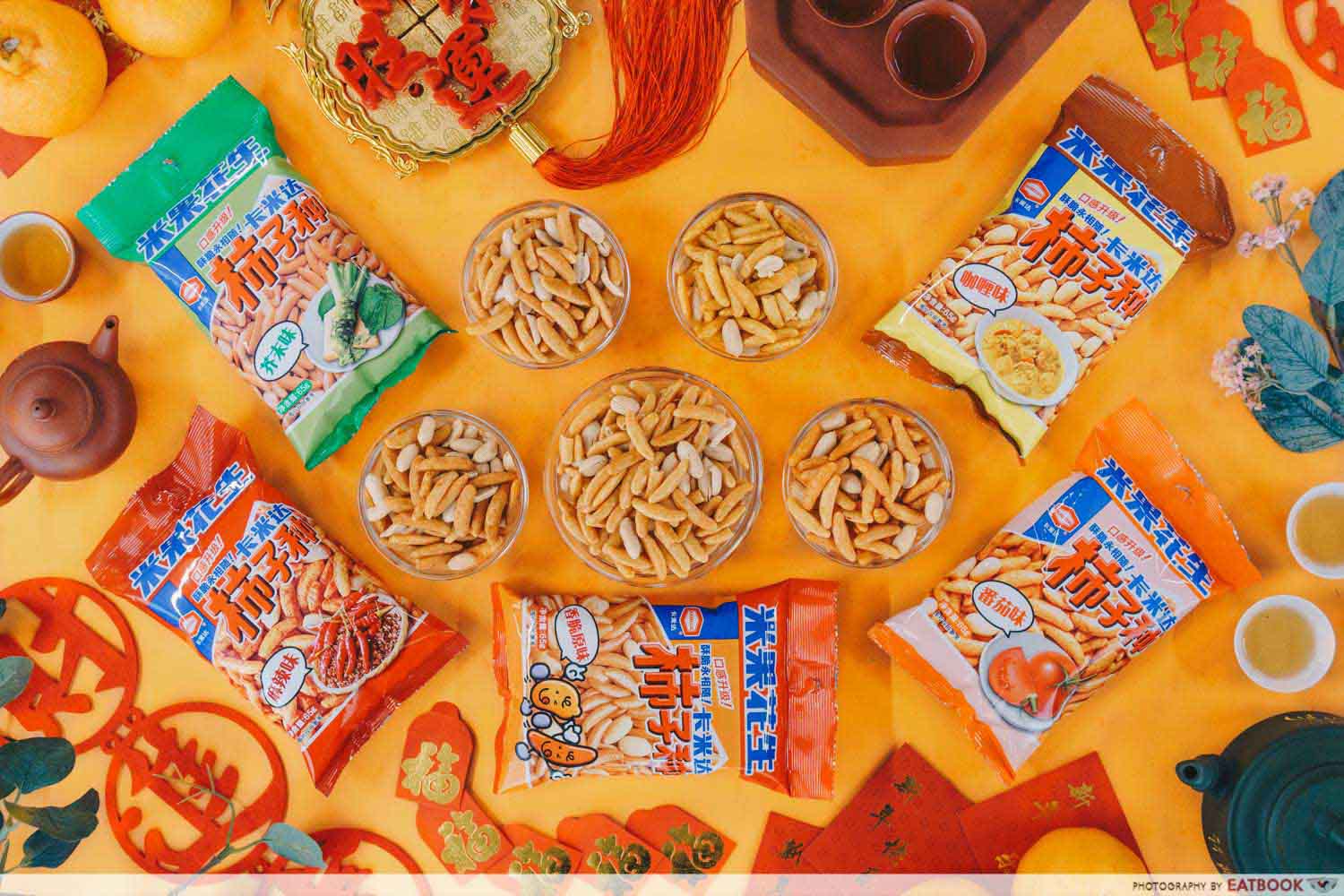 Contrary to their name, Kameda Persimmon Seeds aren’t actual seeds. The crispy Japanese snacks are made from glutinous rice, and baked into the shape of persimmon seeds with five different flavours to enjoy. From 16 January to 5 February 2020, the snacks go on discount for Chinese New Year. You can get them at $1.35, as opposed to their usual price of $1.80, at selected FairPrice stores and FairPrice Online. 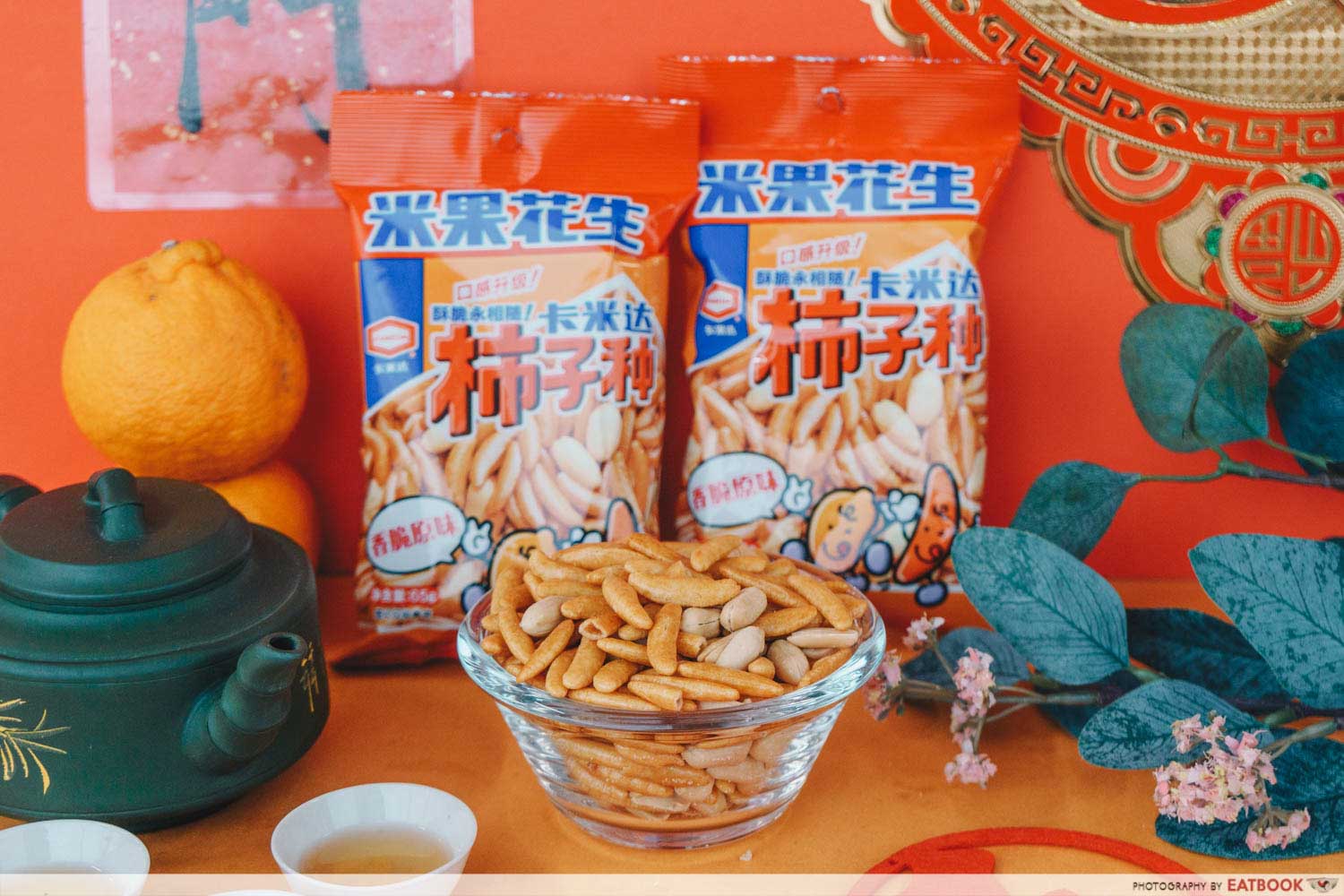 The Original flavour is lightly seasoned. One packet has 65g worth of seeds, and the portion size is great for its price. 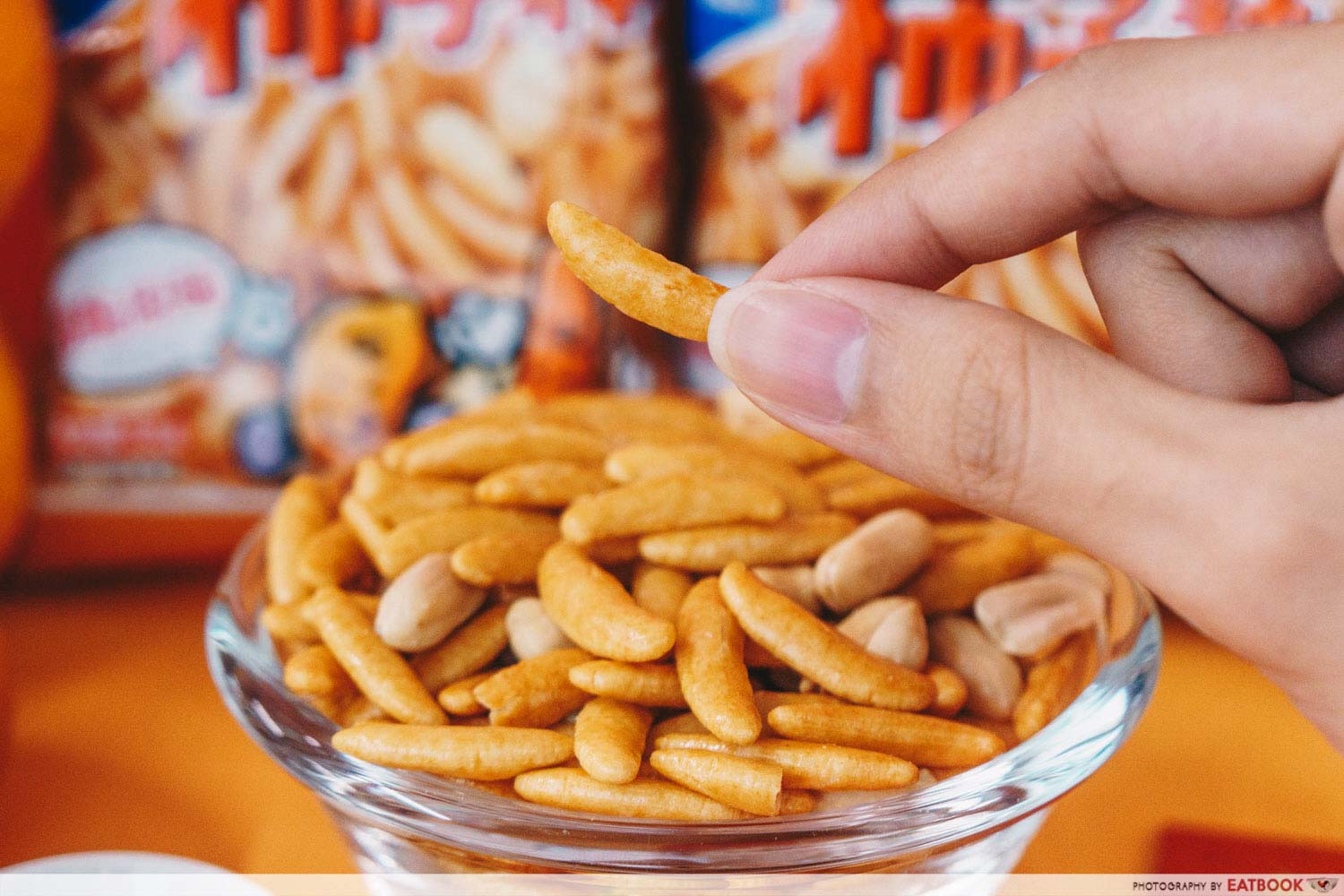 Each packet contains a mix of tasty persimmon seeds and crunchy peanuts. The interior of each persimmon seed is hollow, and the crisp shell is slightly salty. I enjoyed the texture, but the original version didn’t have enough flavour for me to finish a whole pack. The peanuts helped a lot in that regard, and it was easier to chow down on crunchy mouthfuls when the peanuts were in the mix. 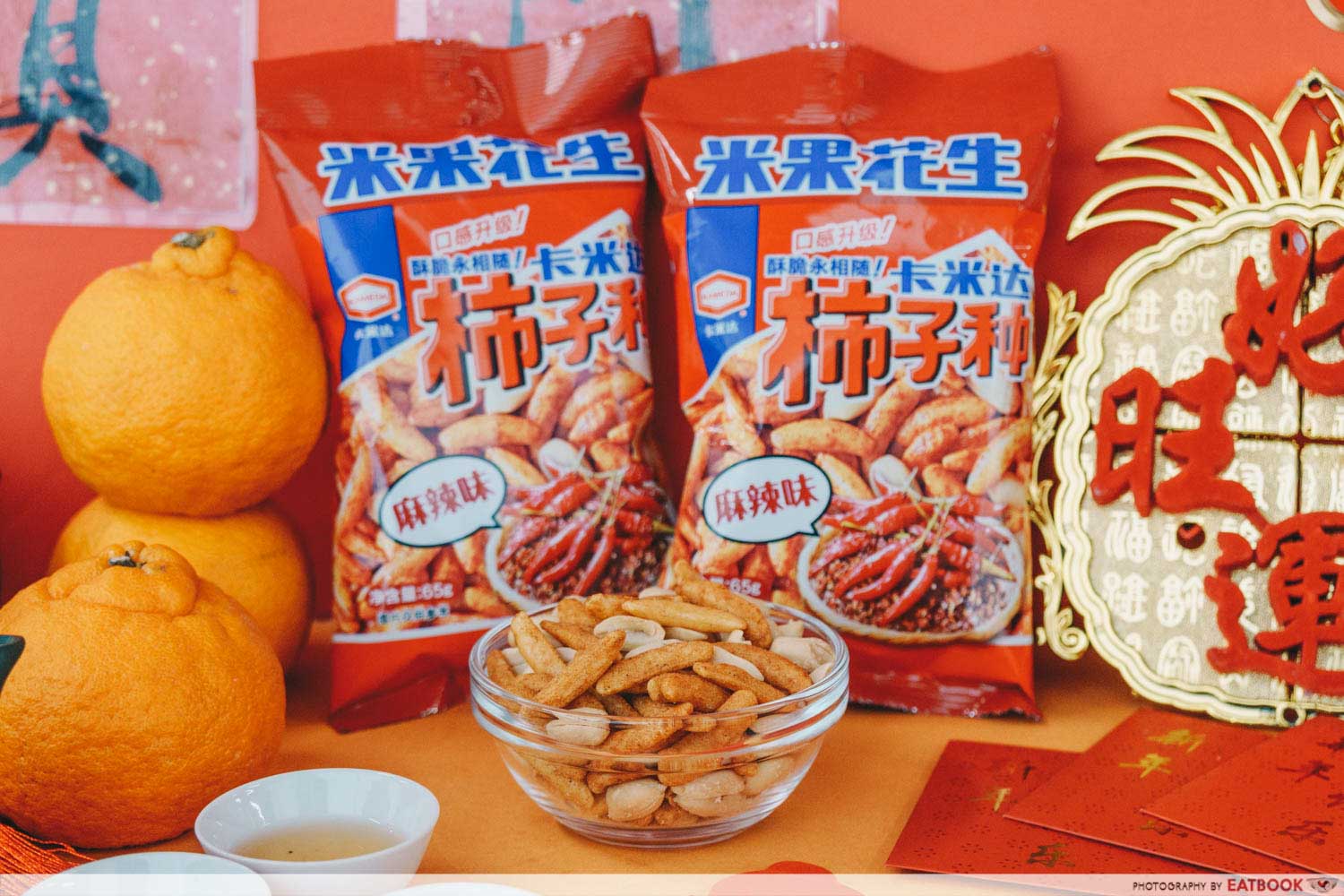 I tried the Spicy flavour next. It has a distinctive mala flavour, rather than a generic heat. Immediately, I was taken aback by how strong the taste is. While it didn’t have the same numbing sensation, there was that powerful kick of spice and slight sourness, along with the herbal mala aroma. It was a lot better than the original one, since there was a huge boost of flavour alongside the crispy texture. You might want to have a glass of water ready when you munch on these. 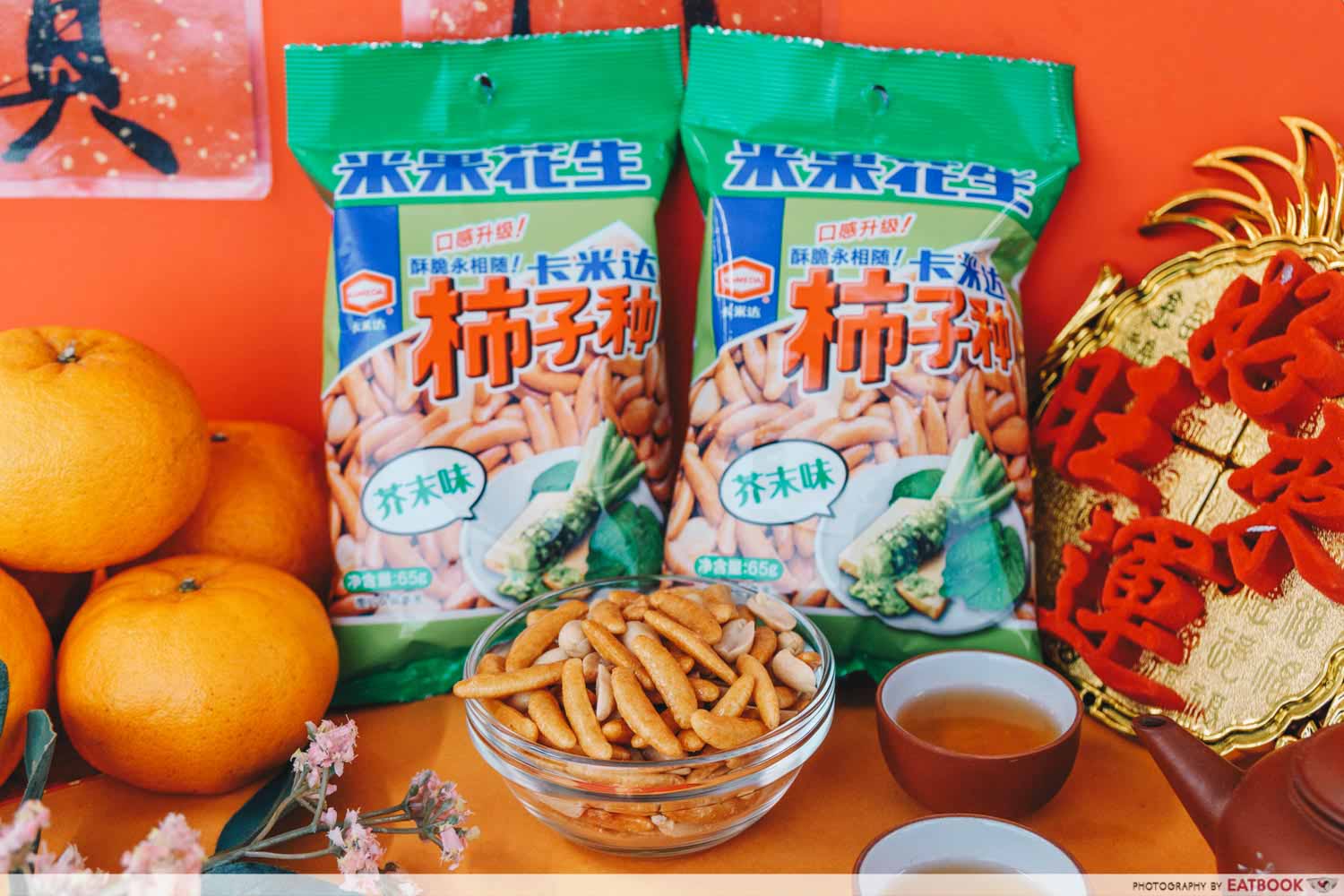 My favourite was the Mustard flavour. Despite its name, it is really a packet of wasabi-flavoured snacks. Just like the mala variant, I was surprised by how accurate the flavour was. It immediately captured the spicy and bitter tinges of wasabi, including the tingling sensation you get when the aroma rises into your nose. This is the most intense of the five flavours. 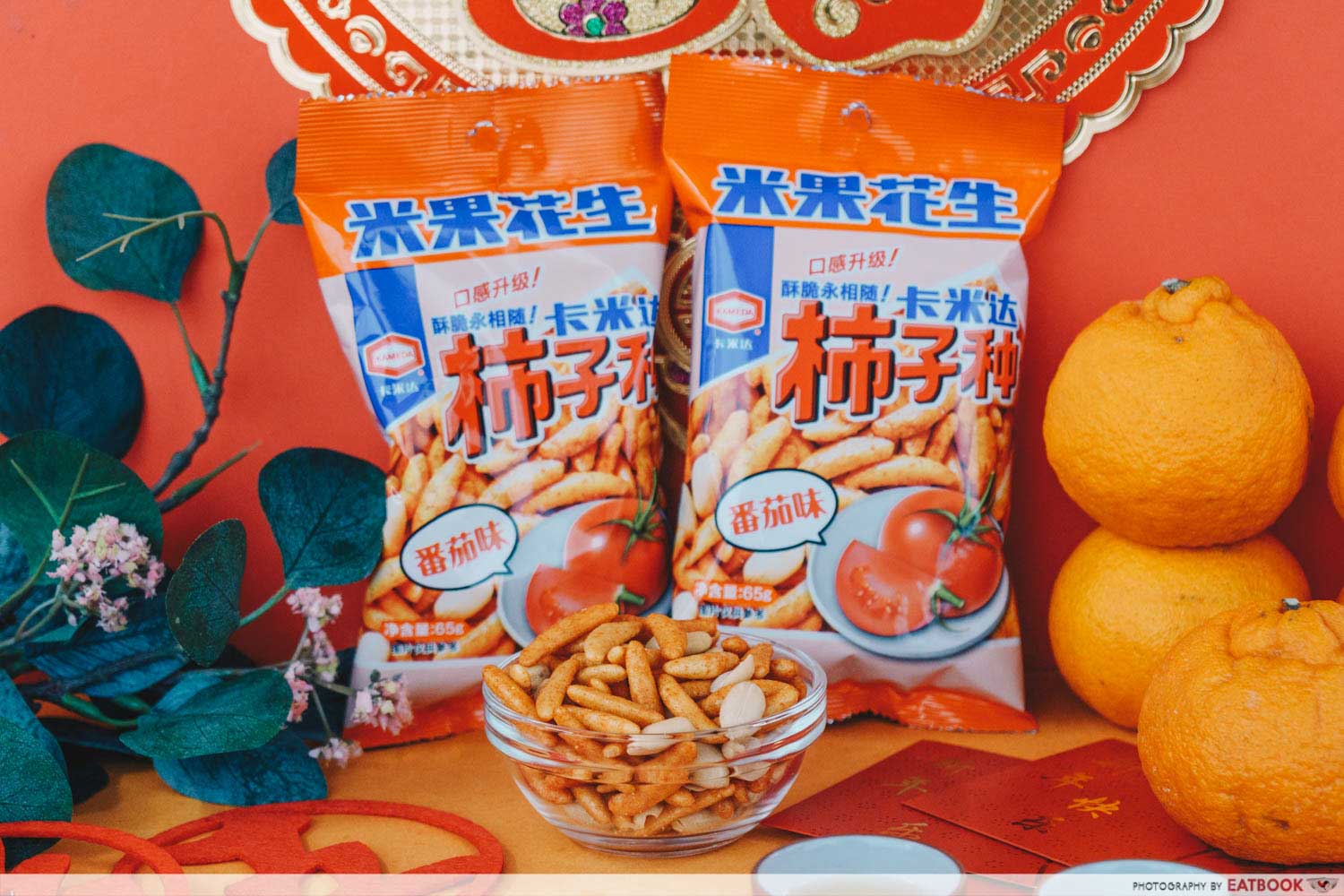 The Tomato flavour is tangy and slightly sour. If you’re not a fan of intense spiciness, get this packet. The snacks were sweet and enjoyable, with no overpowering element. As much as I liked the wasabi and mala ones, they’re admittedly too intense to scarf down all at once. I had a way easier time eating the tomato flavoured ones. The sweet and nutty peanuts went particularly well with this flavour. 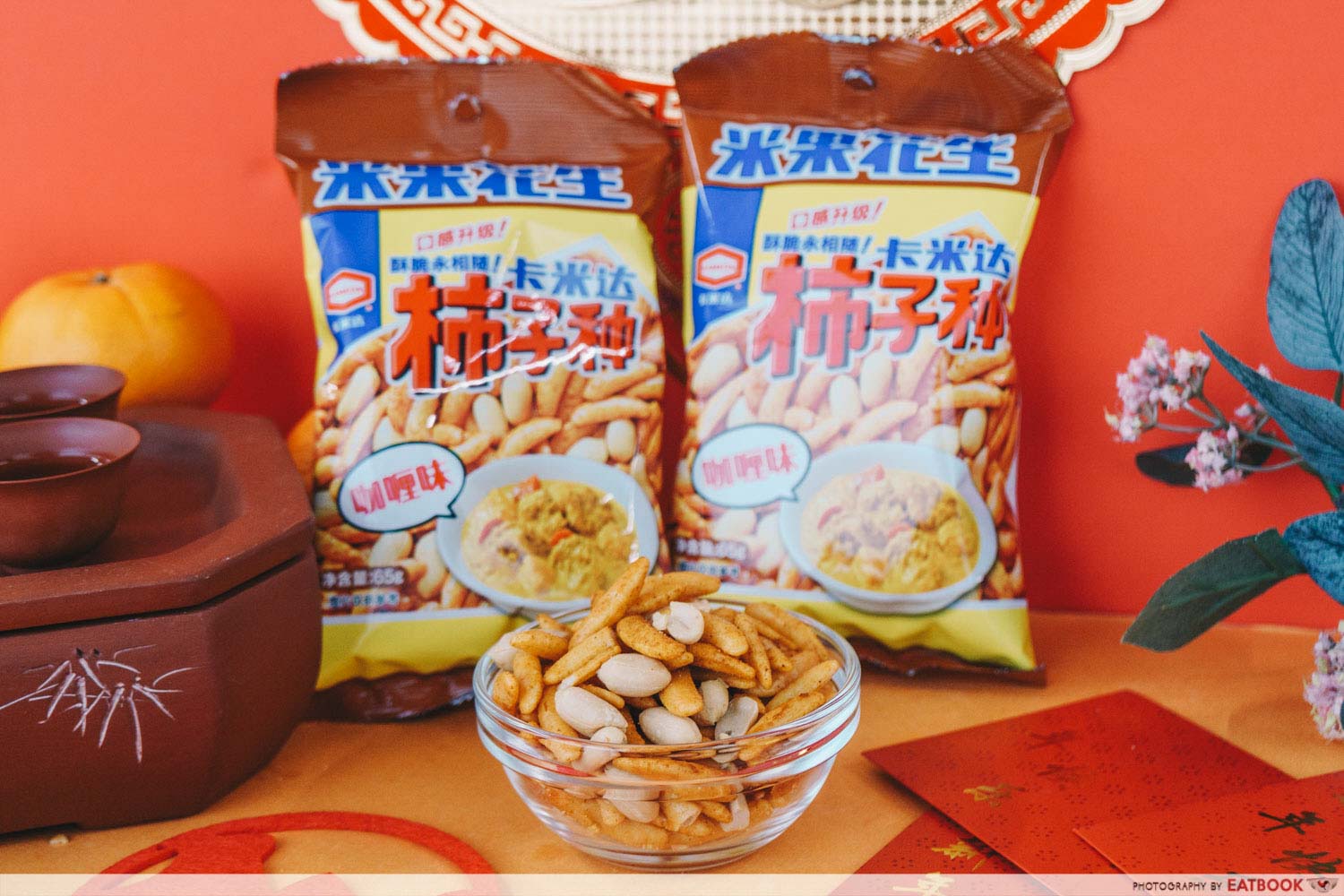 Last but not least is the Curry flavour. While the spicy and mustard variants had clear, powerful flavours, the curry one is a bit more subtle. It didn’t hit me with the taste of Japanese curry instantly. I had to eat a few more handfuls before I could recognise the mild flavour. Once the taste became more pronounced, I could recognise the sweet notes of katsu curry. 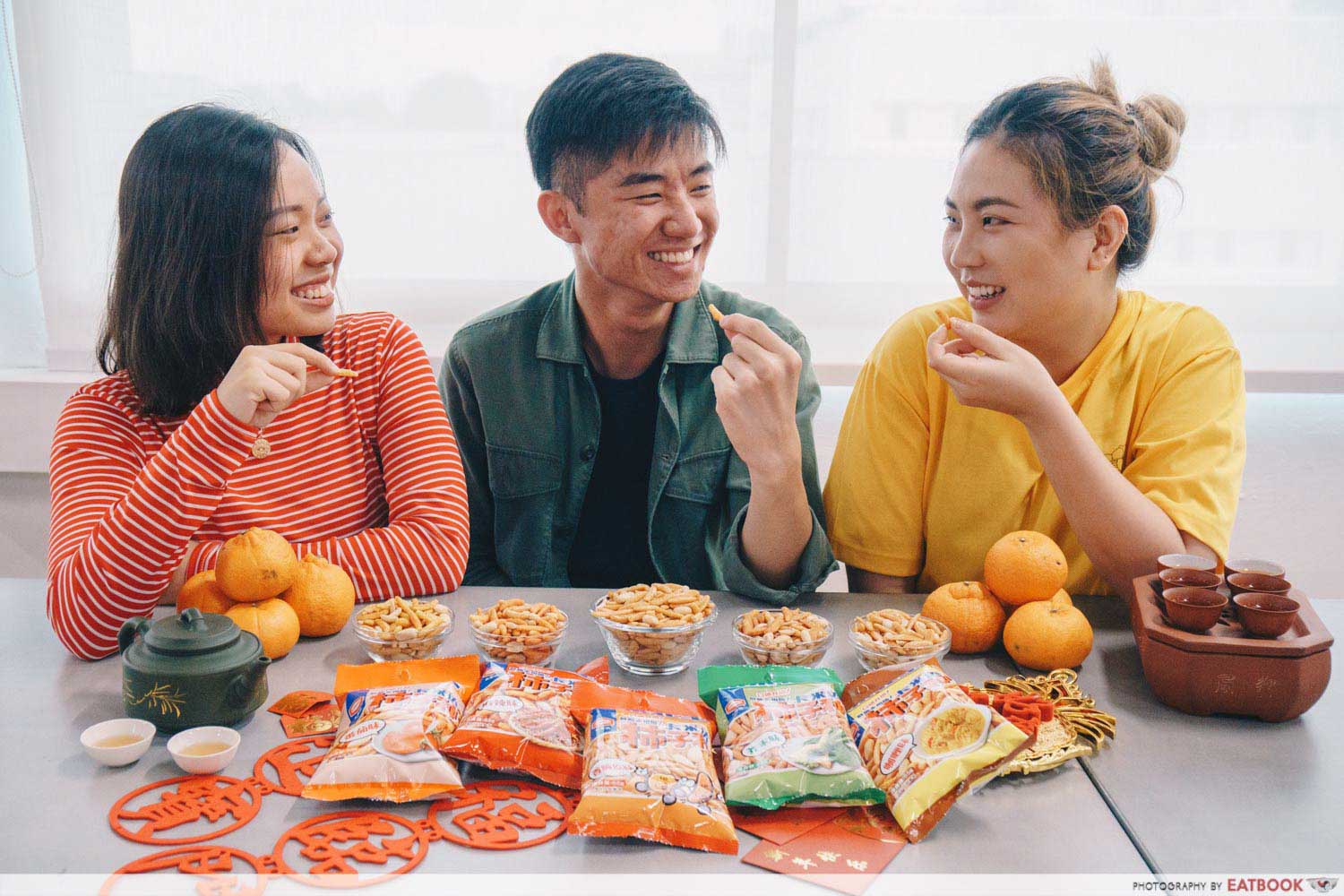 Overall, I really enjoyed the persimmon seeds, and flavours like the spicy one would fit in well as a Chinese New Year snack. My personal favourite was the Mustard, followed by the Spicy, Tomato, Curry, and Original flavours. If you’re planning on getting them, be sure to stock up while the discount lasts. From now till 5 February 2020, you can get them at a discounted price of $1.35 at selected FairPrice stores!

Photos taken by John Lery Villanueva.
This post is brought to you by Naspac. 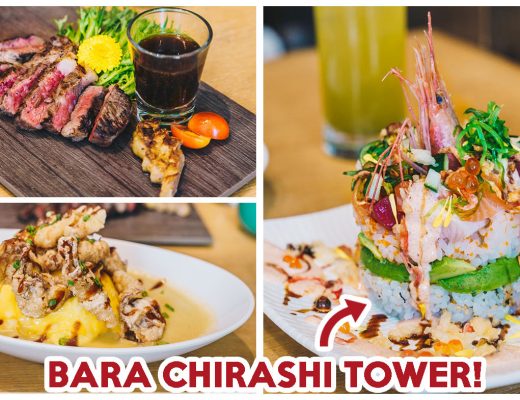 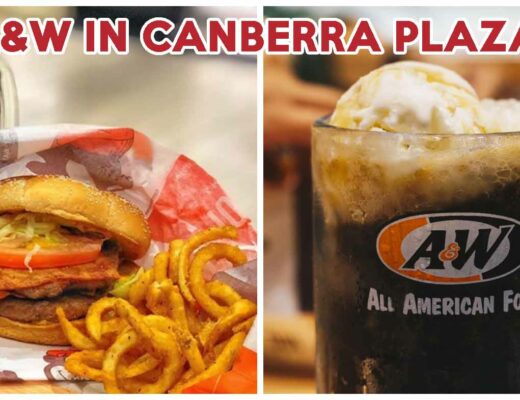 A&W To Open New Branch At Sembawang On 18 December, Now Officially Halal Too 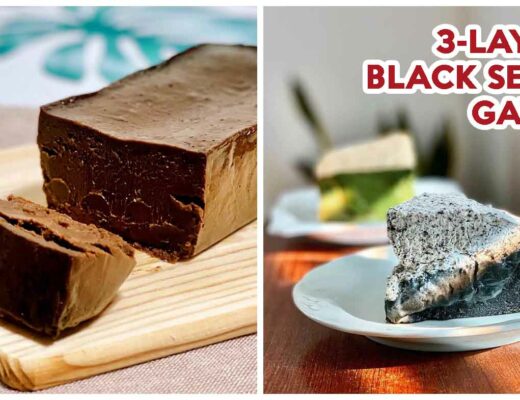