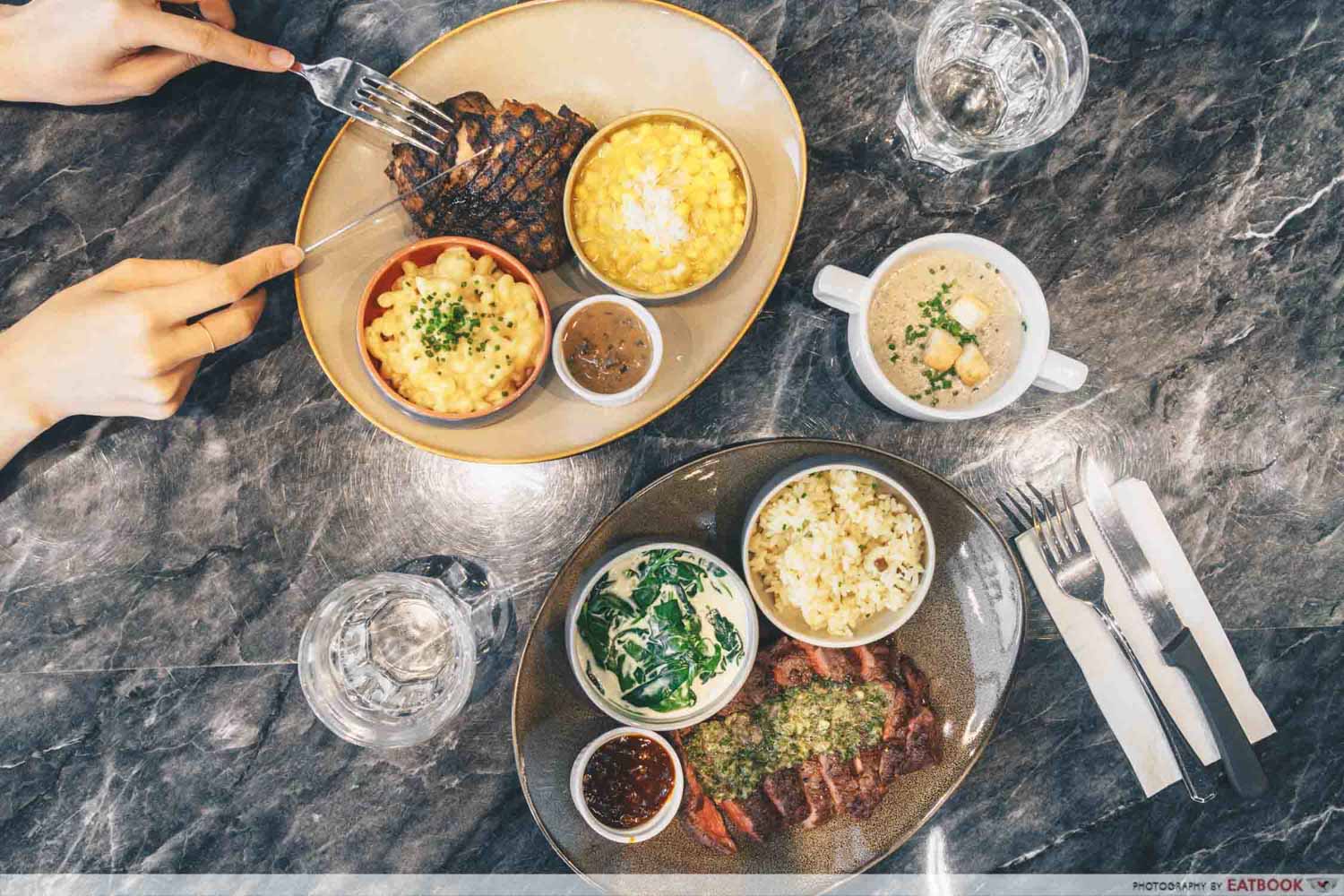 I’ve failed miserably at attempts to be vegan, as nothing can separate me from my love for meat. So naturally I was pretty pumped up when I heard about MediumRare, a steakhouse at Tampines. Opened by the same people behind Saveur, this latest concept shifts away from affordable French cuisine to serving quality steaks in a casual dining setting. 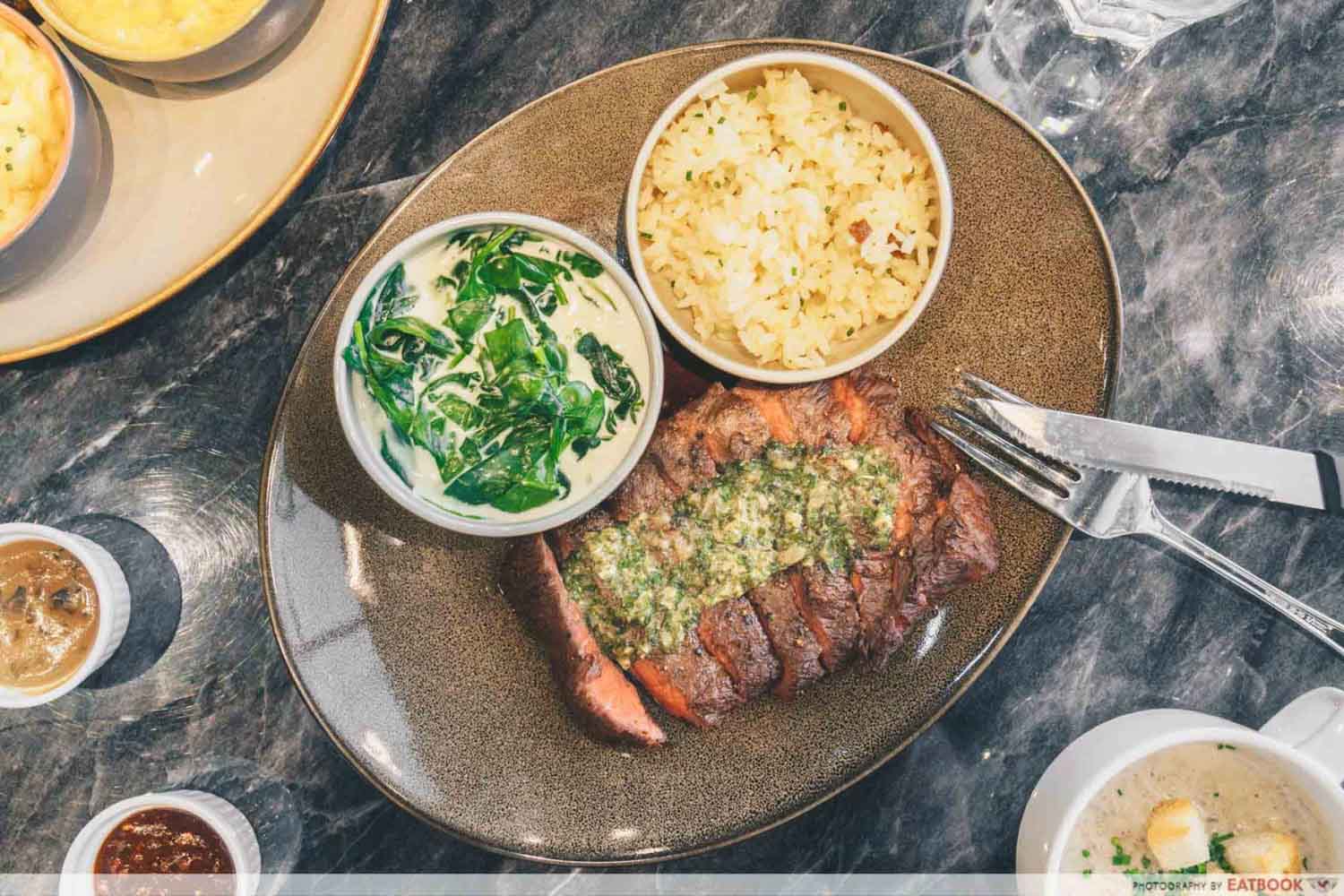 At MediumRare, you simply select from their range of Australian steaks and opt for your preferred doneness. Despite presenting itself as a steakhouse, their menu includes other mains such as rice bowls, poultry, and fish. Even Saveur’s popular duck confit can be found on the menu, but my eyes were on the prize with their Flat Iron ($18++) steak. 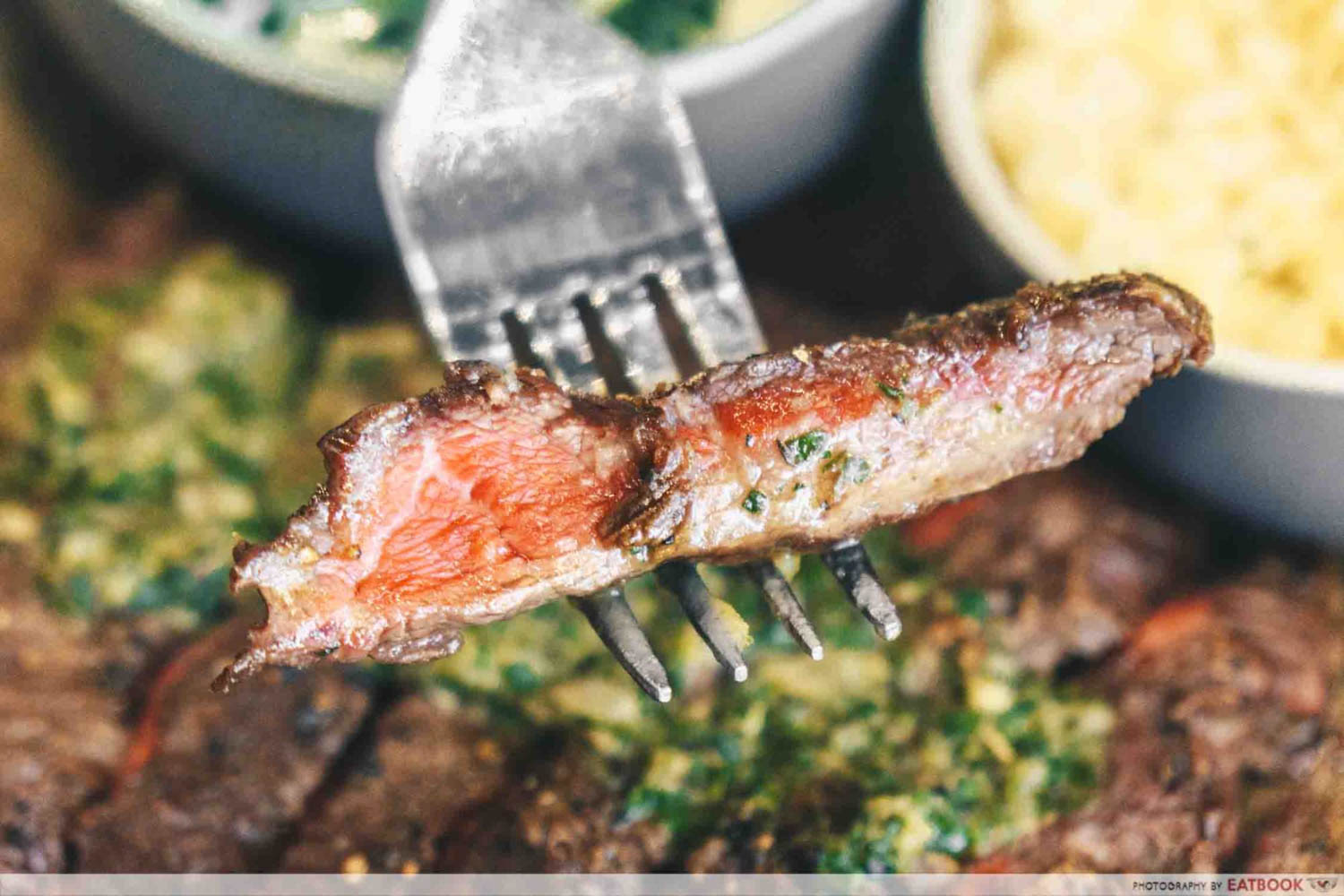 Deciding to have my steak done medium, the meat was pink in the centre, while evenly charred on the outside. The marbling of the beef was beautiful. The fat content coupled with the seasoning of salt and pepper brought out the natural beefy flavour in each tender slice.

Each order of meat came with one free choice of sauce, and I opted for the classic Cafe De Paris. The butter-based herb sauce was rich, further elevating the robust flavours of the beef.

Besides Cafe De Paris, other sauces, namely mushroom, black pepper, mala, and black bean, are also available. If you prefer going heavy-handed on the sauce, you can get an extra serving at $2++. 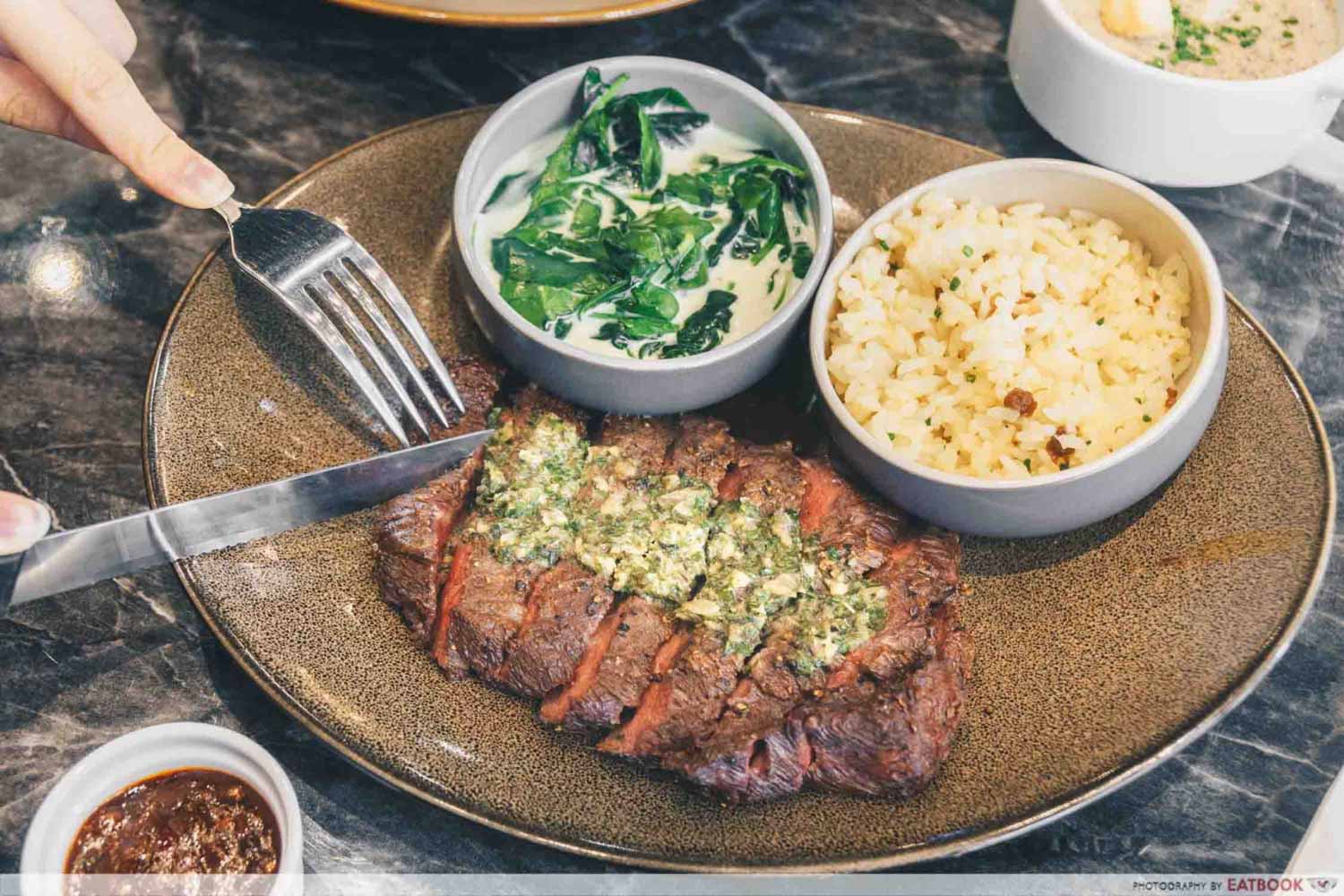 The dish is completed with two free sides, which you get with each order of meat. There is plenty to choose from such as Potato Wedges, Onion Rings, and Crunchy Coleslaw. If you find yourself wanting more, each extra serving sets you back $2.50++.

I decided to go for the chef’s recommendation of Creamed Spinach and Beef Fat Fried Rice. Though sounding pretty flavour-heavy, both dishes were not as jelak as expected. In fact, the beef fat fried rice was surprisingly bland. The lack of a strong beefy taste left this dish tasting like typical plain fried rice. On the other hand, the creamed spinach found a sweet spot, striking a balance between creamy and thin. 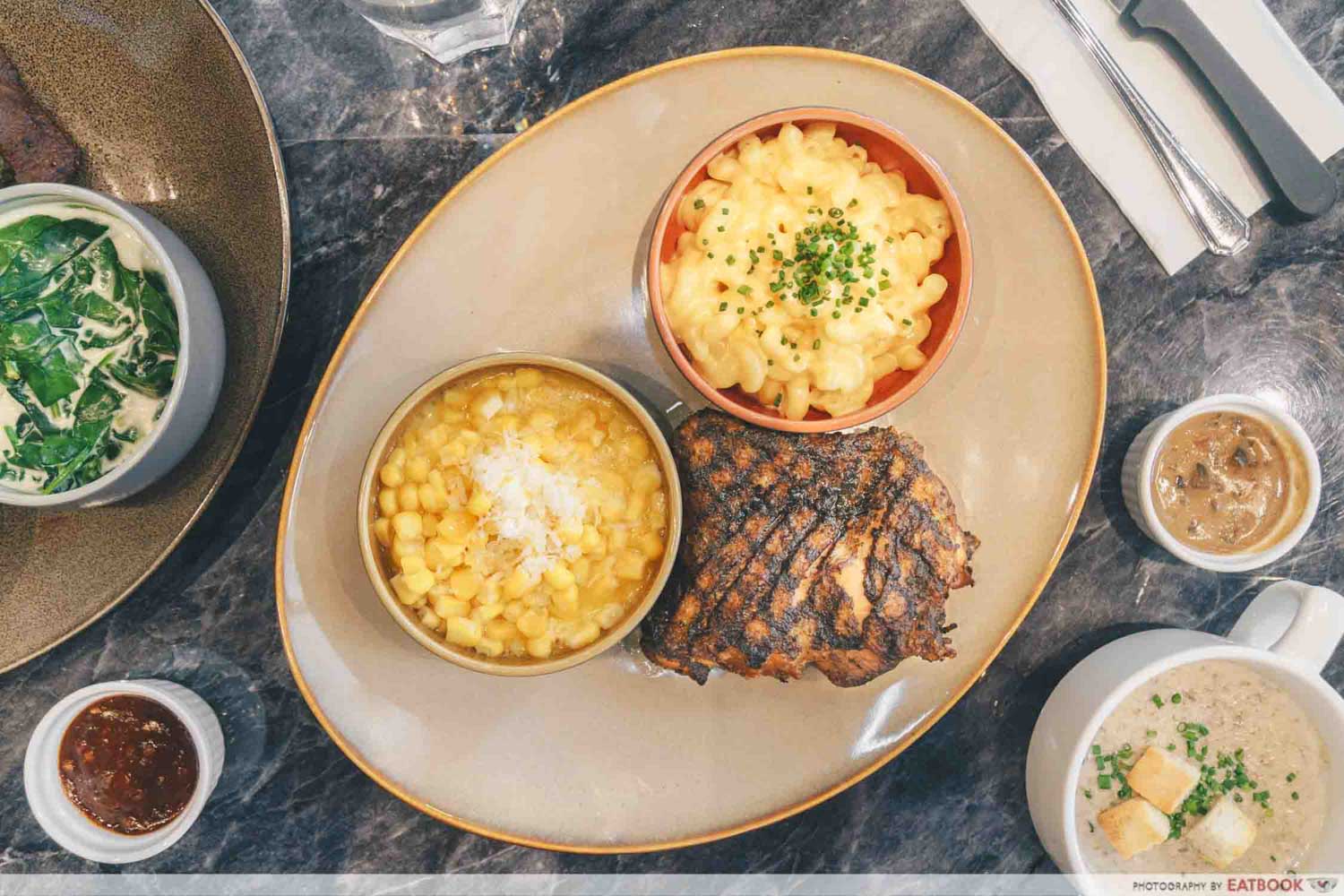 After having my fill of steak, I decided to try out their Grilled Chicken Chop ($14++) with a side of Mac & Cheese and Corn & Parmesan. The serving of chicken seemed small at first, but the taste made up for its tiny portion. The chicken thigh turned out to be thick and meaty as I cut through it. Each bite of this succulent meat was oozing with flavour, and its charred skin gave off some smoky hints. The earthy tones of the accompanying mushroom sauce highlighted the tastiness of the meat. While an a la carte order of mushroom soup is at $4++, you get a dollar off when ordering it with any main. Garnished with chives and croutons, this hearty bowl of soup was rich in earthy flavours. The velvety soup and small mushroom chunks gave a harmony of textures. 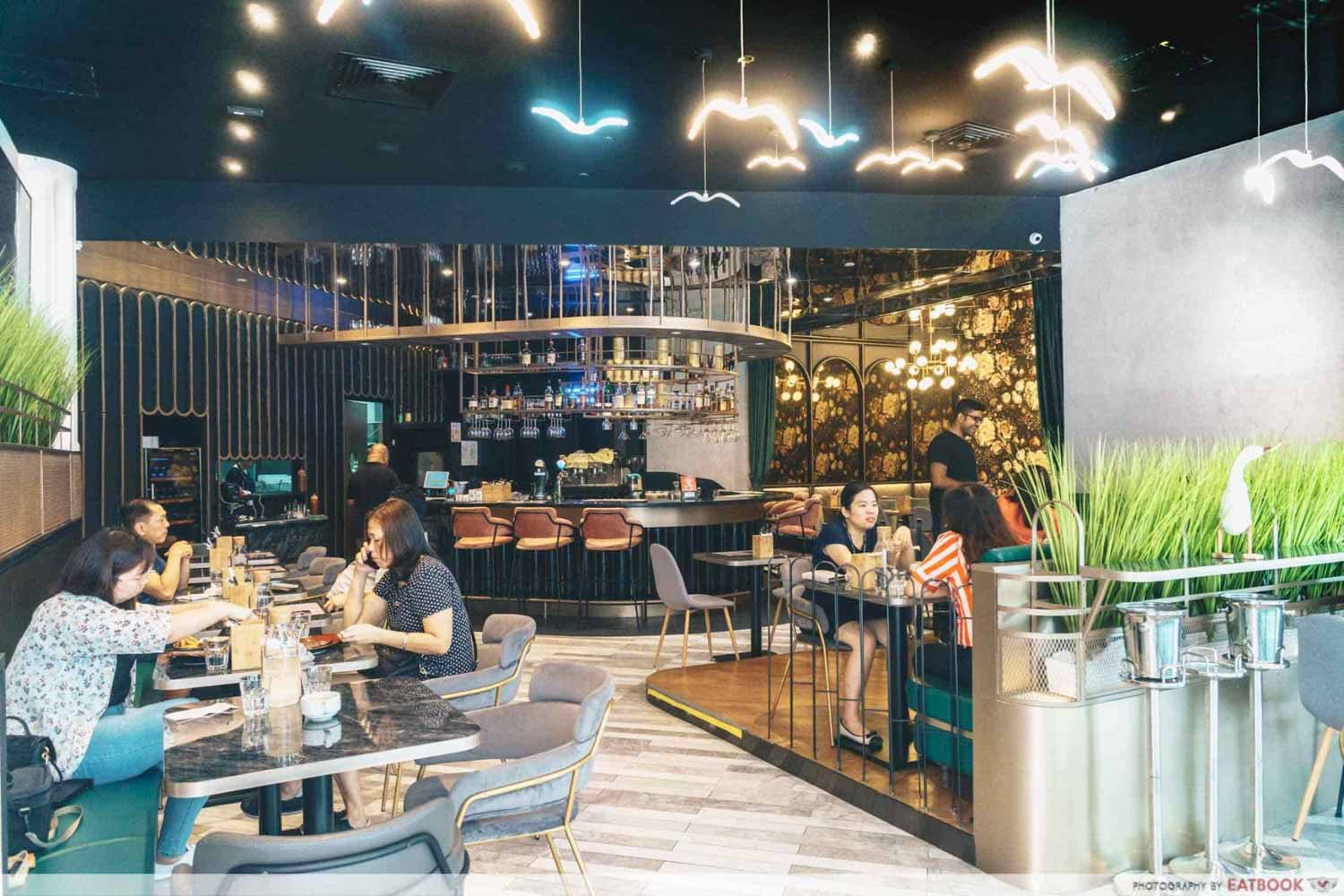 Formerly occupied by Frapas Bar, MediumRare has retained the chic decor of their sister restaurant under Saveur. This elegant restaurant has a casual vibe, making it a great place for date nights or even client meetings. With plenty of seats, you don’t have to worry about the lunchtime crowd from neighbouring offices. If you’re dining alone, there is the option to people watch at their window seats, or chat with their staff at the bar counter. MediumRare could have been my number one go-to restaurant for satisfying my meat cravings. However, the small portions don’t justify the price tag, even if it’s relatively cheap. If I happen to run errands in the East and feel like splurging a little, I would definitely treat myself to their Flat Iron.

10 Best Steaks Under $30 That Are Mouthwatering Delicious 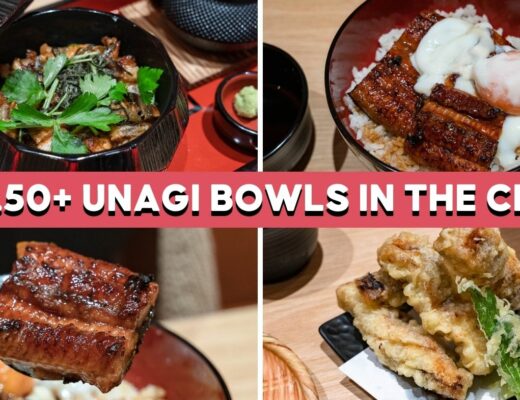 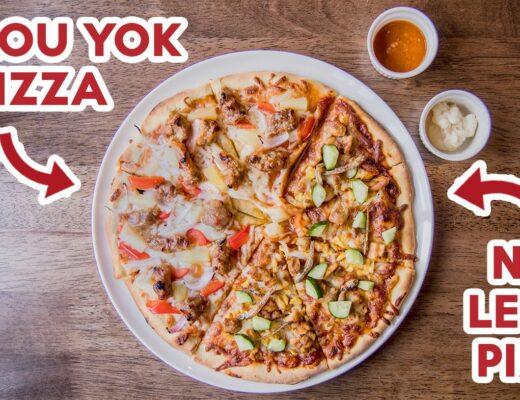