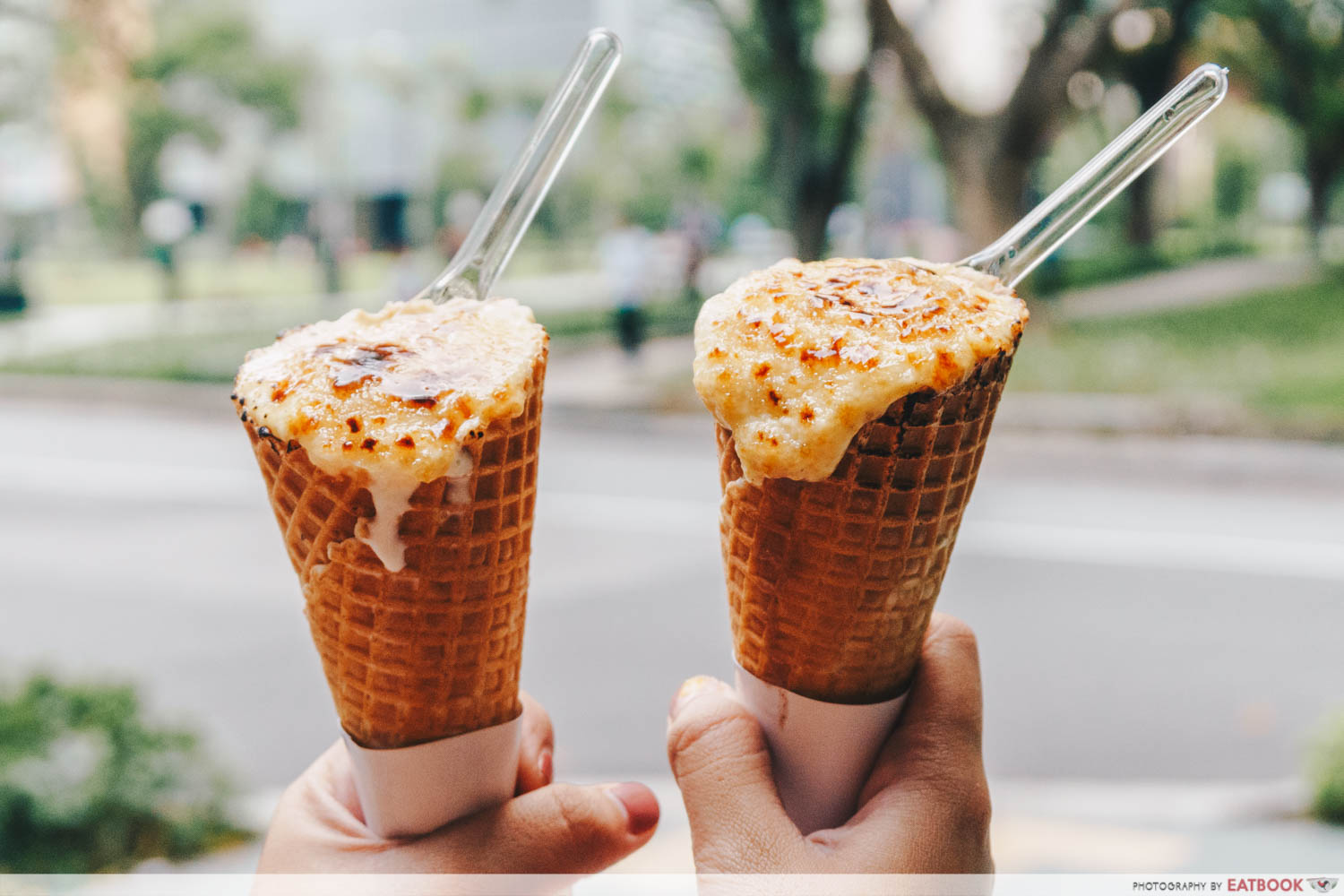 Naganuma Ice Co has been getting long queues in Japan, thanks to their ice-cream and cheese creations, which use milk produced at ranches in Naganuma, Hokkaido. And you can now find a store right smack in the middle of our CBD, just a stone’s throw away from Tanjong Pagar MRT Station.

There’s no question that Hokkaido milk is my favourite kind of milk – even if it pains me to fork out more than $2 for milk that disappears in four gulps. The milk is light yet rich in flavour, so it’s no wonder any dish that includes it sells like hotcakes.

I fell in love with the Crème Brûlée Soft Serve ($8). It features soft serve followed by a thick layer of creme brulee, all stacked into a cone. You can choose from nine soft serve flavours that rotate every few weeks. There are classics such as Rich Milk and Matcha, while other notable flavours include Yubari Melon, Red Wine, and Chocolate.

Let the aroma of burnt sugar greet you, as the server uses a propane torch to caramelise the brown sugar. 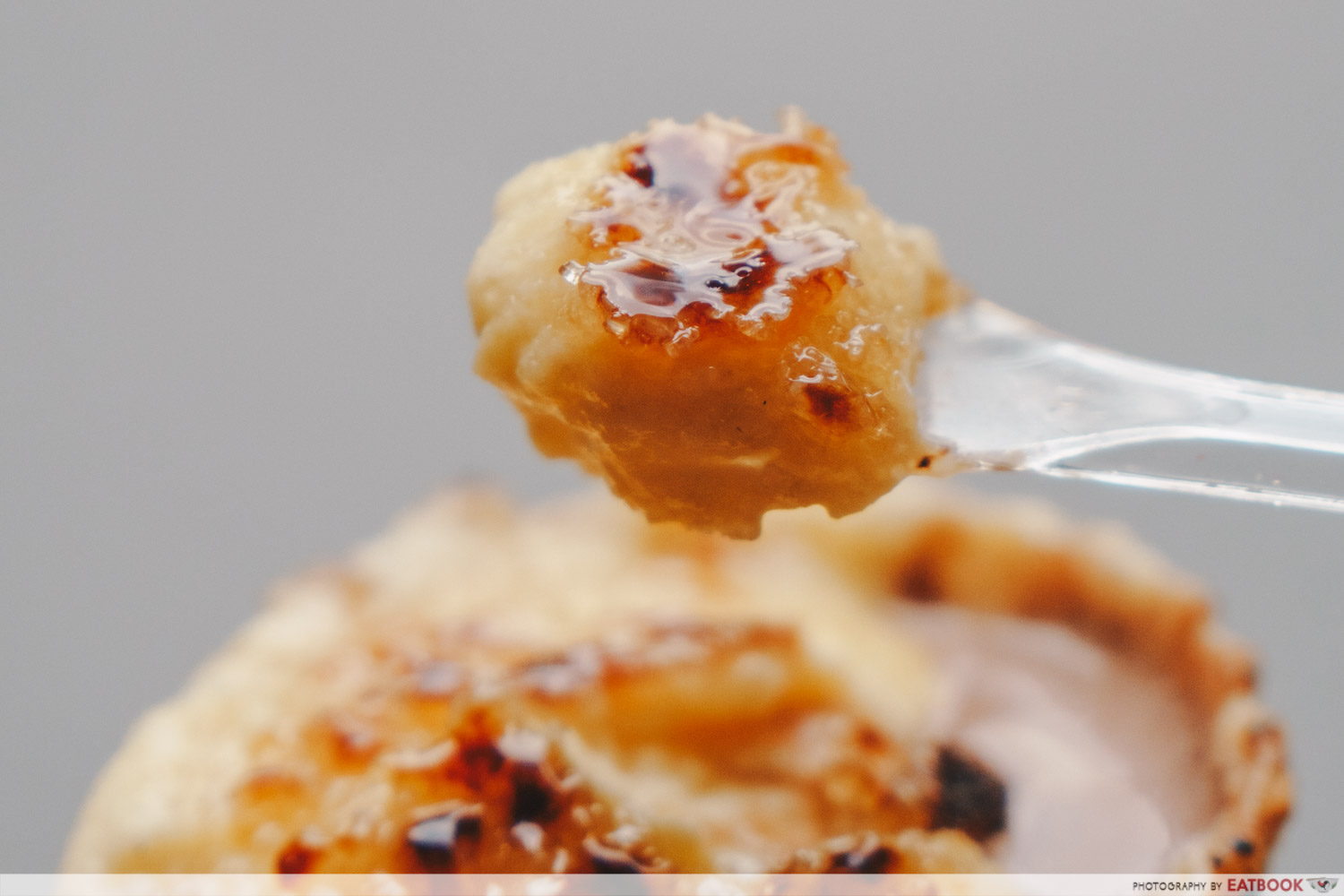 The crunch from the caramelised layer dissipated any worry I had of a lacklustre dessert, when I saw a tablespoon of brown sugar poured generously over the custard. It was sweet and smoky, pairing beautifully with the milky custard underneath. 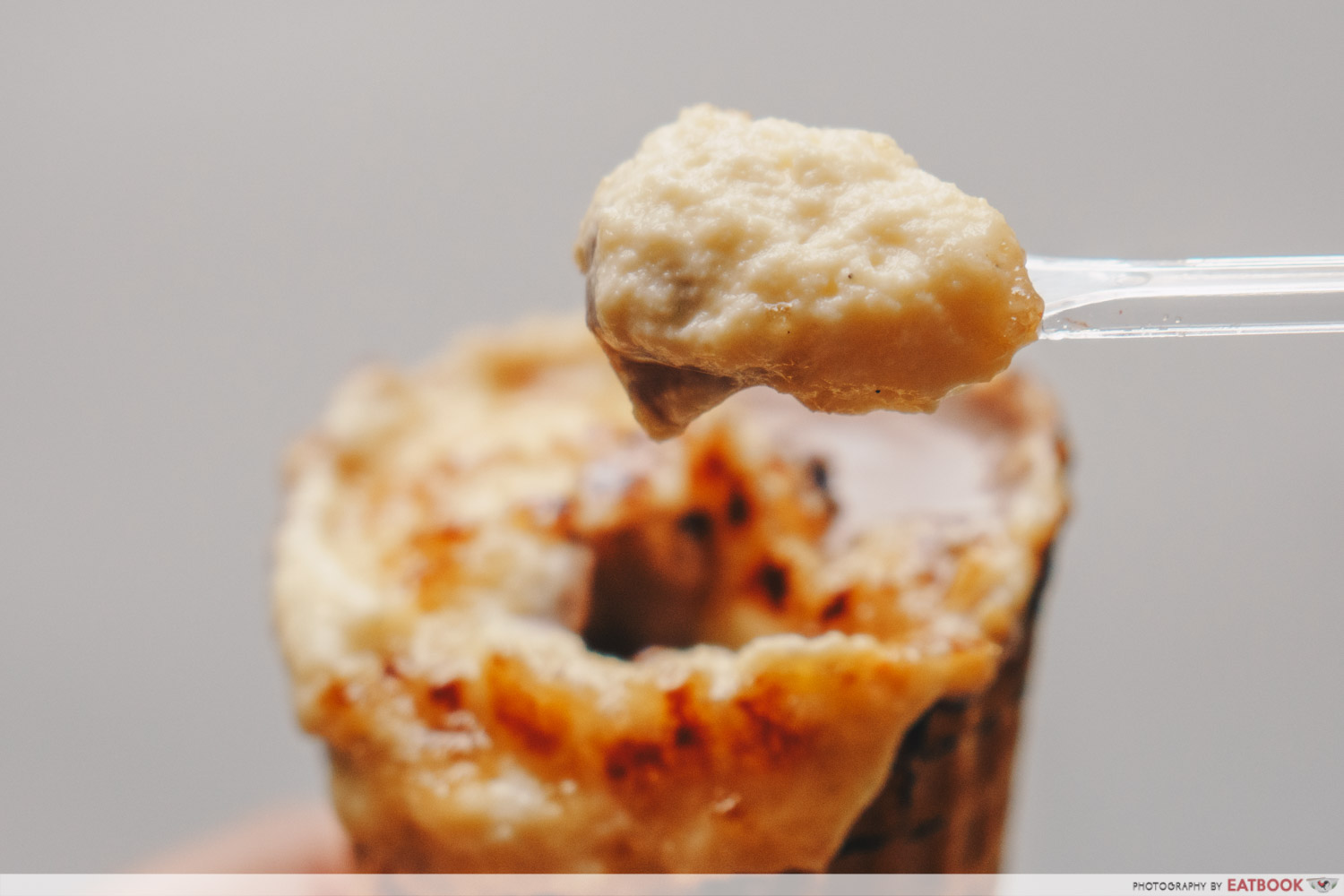 Despite the hot weather and the bruleeing, the custard pudding was far from runny. It was creamy and buttery, with a mellow egginess at every spoonful. However, the soft serve suffered a different fate from the heat. It melted too quickly, as compared to the custard pudding. Made with over 8% milk fat, the Rich Milk soft serve paired best with the eggy custard. The chocolate soft serve was surprisingly sweet with only a tinge of bitterness. When paired with the creme brulee topping, the custard takes on a supporting role rather than occupying centre stage. 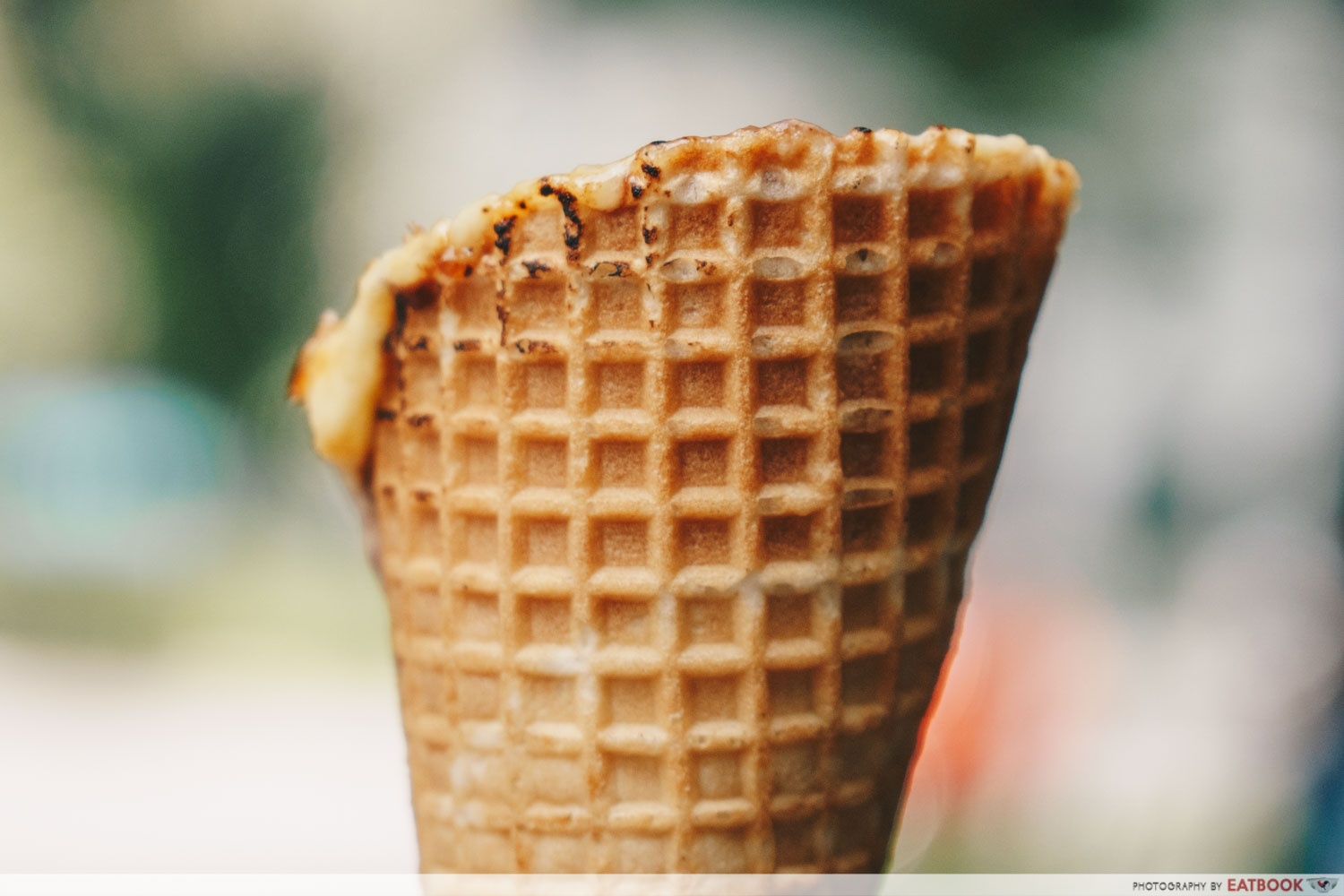 Sadly, I could not say the same about the cones. They were soft from being left exposed to air, making the novelty of enjoying a creme brulee ice-cream cone pretty underwhelming. This humble dessert joint operates like a hole-in-the-wall with no seats. Grab a cone and take a nice stroll around the concrete jungle of the CBD. Despite it being a famous store in Japan, there’s no queue – yet. So head down there ASAP before a line forms. 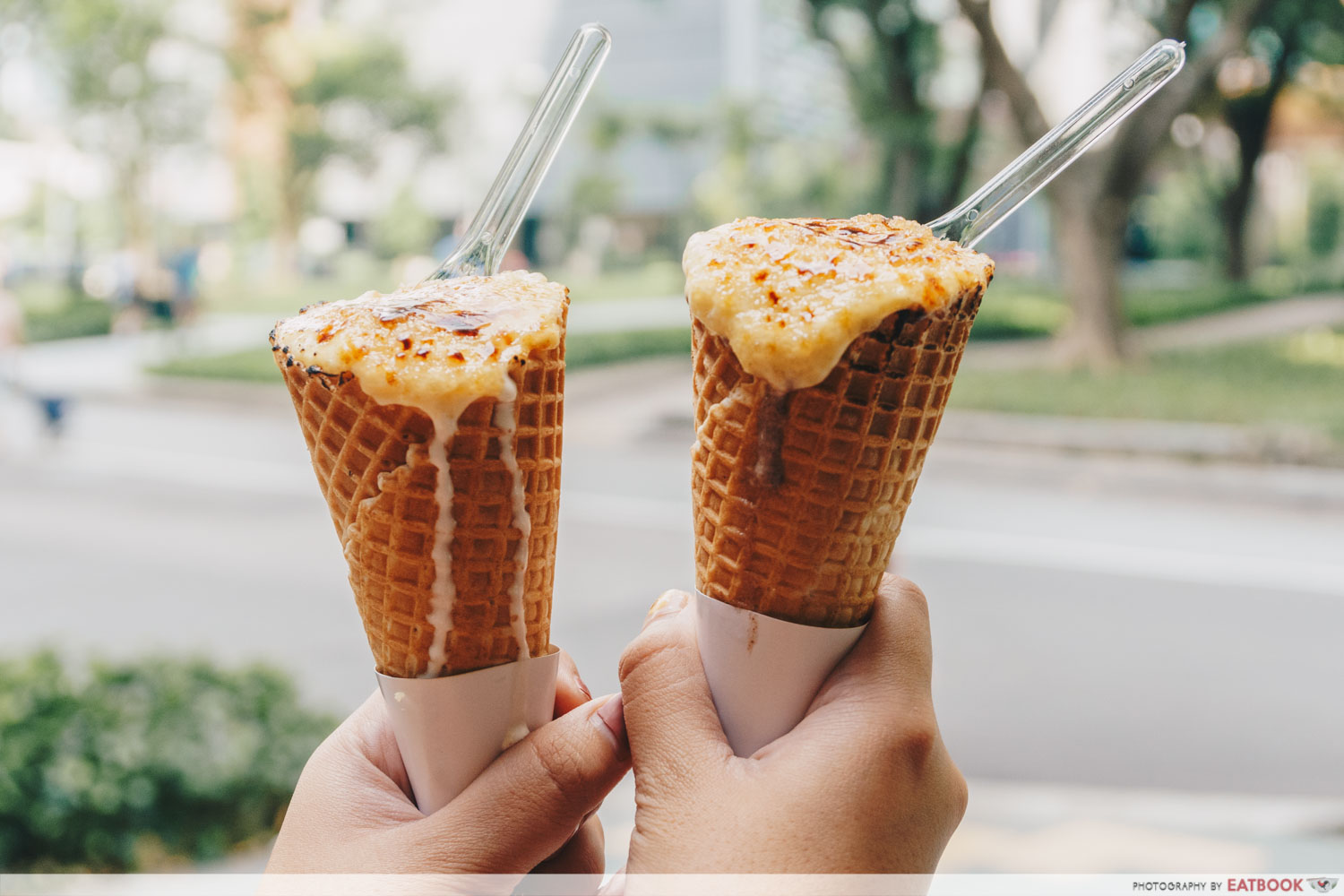 Naganuma Ice Co definitely served as a temporary respite from the hot weather. I can also easily see myself getting a creme brulee soft serve as a quick dessert on cheat days. Head down with a bunch of colleagues and have a taste of each flavour after work!

Photos taken by Tan Ee Jing.
This is an independent review by Eatbook.sg. 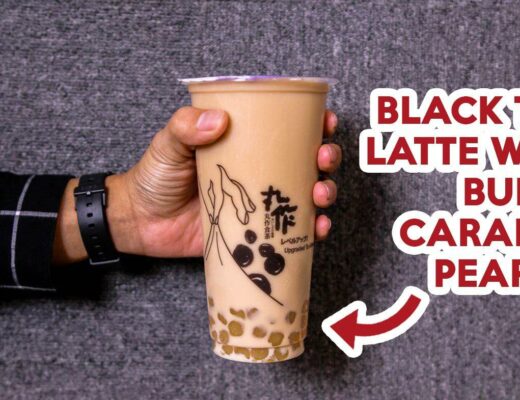 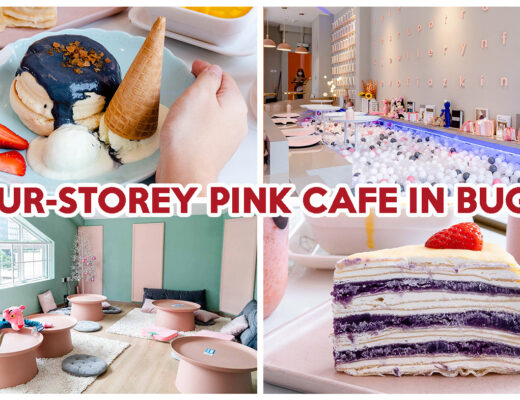