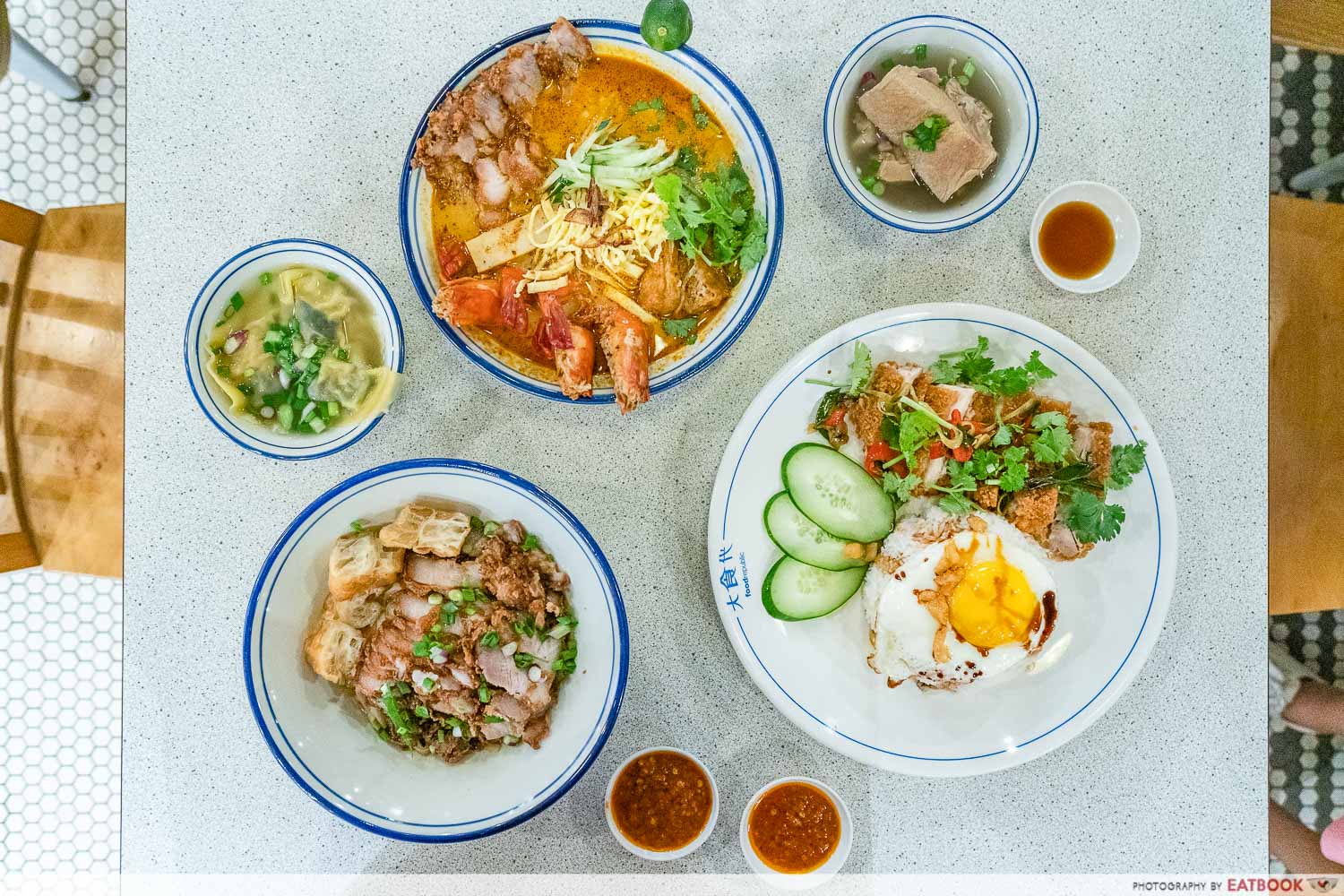 I’ve no qualms about admitting that comfort is high on my priorities when it comes to looking for good food. So, when I heard about famous Malaysian hawker stall Ah Yen Traditional Fried Pork launching its first shop outside of the +60, I pretty much leapt at the opportunity to check them out. 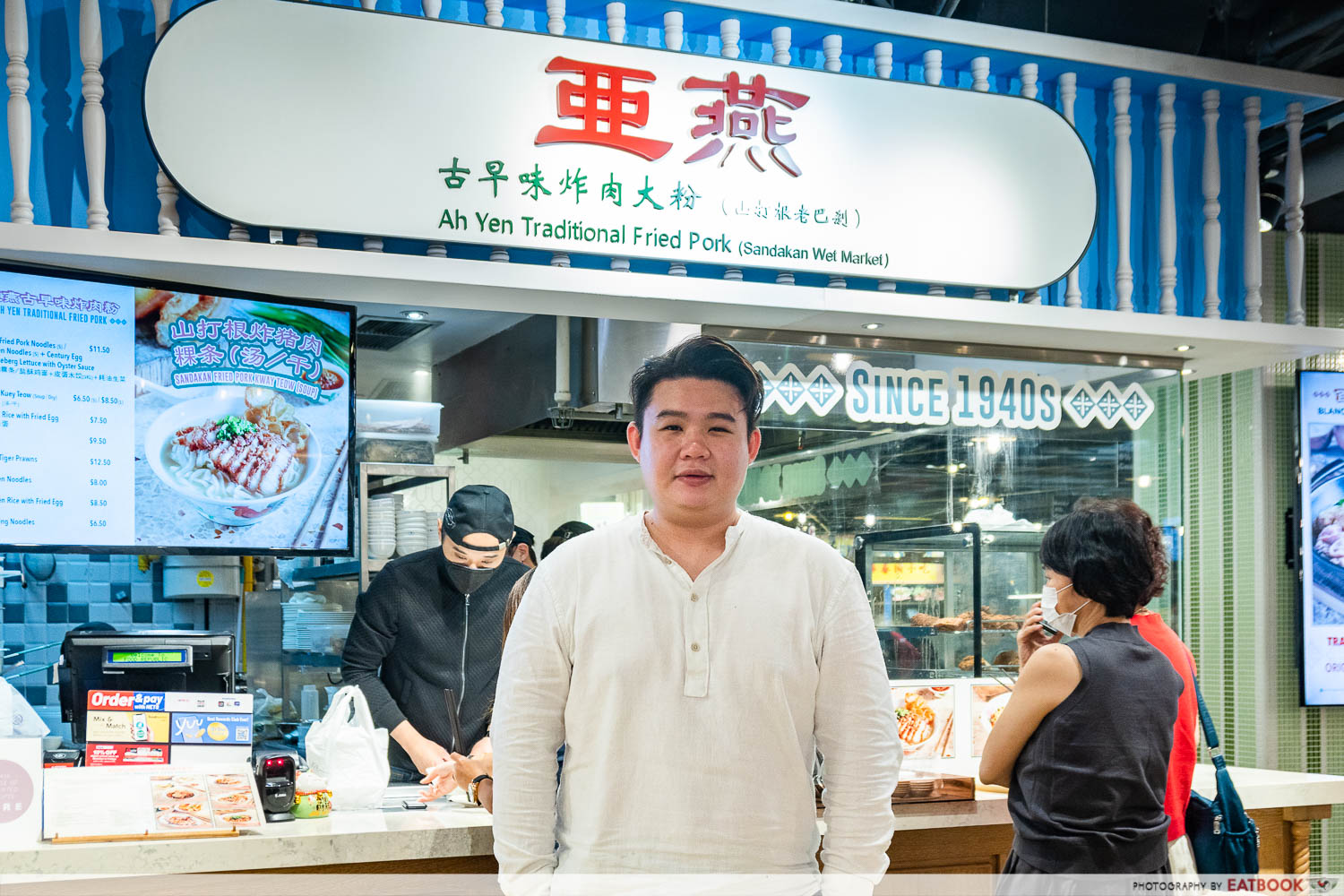 The man responsible for taking Ah Yen beyond its original little hawker stall in Sandakan, a city in Sabah, East Malaysia, is 29 year-old David Lee, who was previously chef de partie at Pollen, in Gardens by the Bay. His grandfather is the original Ah Yen, who first started hawking the Hakka fried pork and house-made kway teow dish in 1940.

Today, Ah Yen has stalls in Kota Kinabalu and KL, and they’ve got their sights set on Hong Kong next. We started the meal with Ah Yen’s signature bowl of Sandakan Fried Pork Kuey Teow Dry ($6.50). It also comes in a larger serve ($8.50), and as a soup version if you prefer. It’s the only dish that the OG stall in Sandakan sells; everything else on the menu at this Food Republic branch has been created by David, together with his business partner Chef Ace Tan. 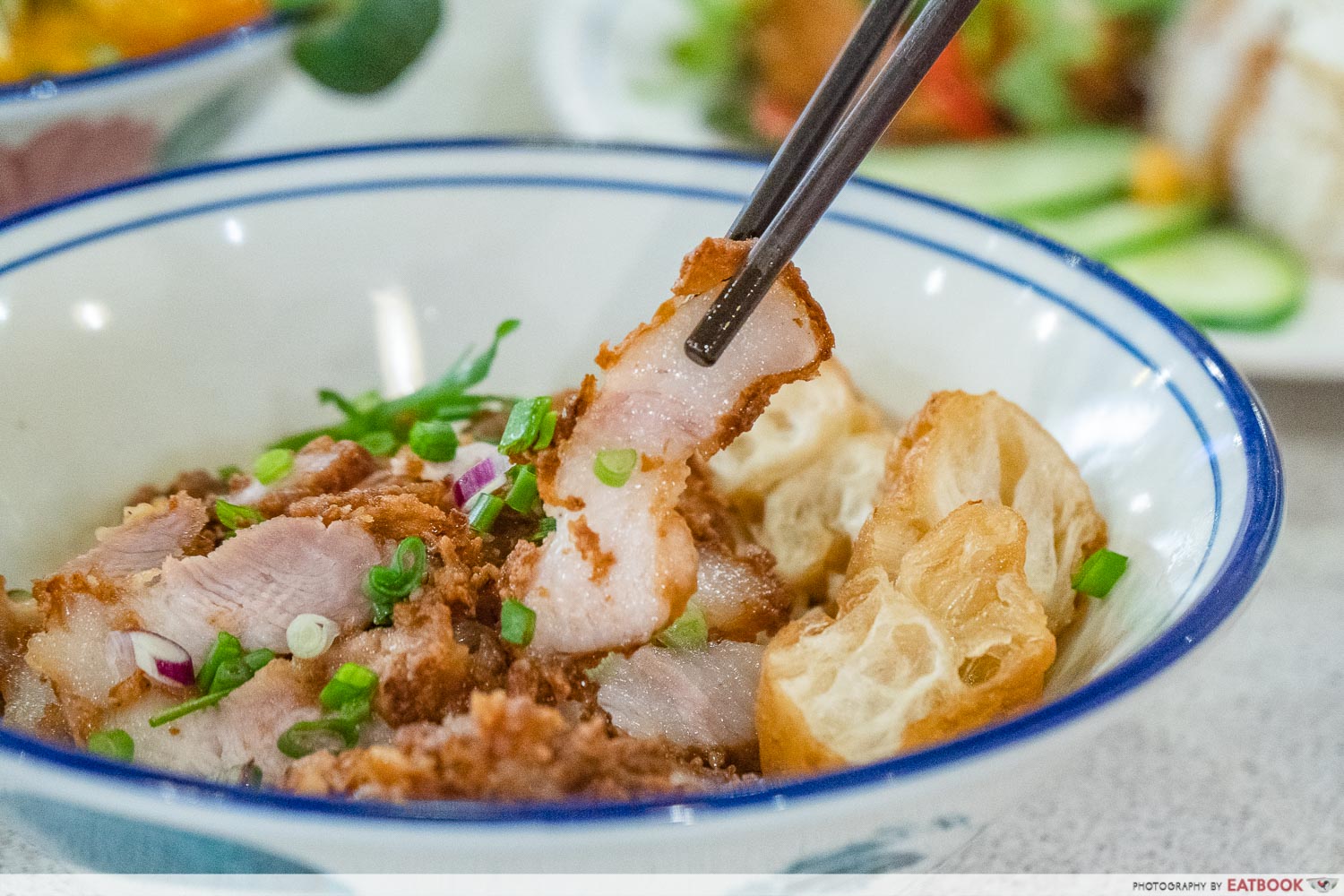 David comes to Singapore every two weeks at least to personally prepare the marinade for the pork himself—that’s how top-secret the family recipe is. What we do know is that as is typical of Hakka fried pork belly, it’s marinated with red fermented beancurd, AKA 南乳 (nán rǔ), which gives it an addictive umami flavour.

The very thin crumb, which gets a thumbs up from me, differs from Ah Yen’s original recipe. David has jazzed it up with a mix of glutinous rice flour and plain flour, which he says makes for a crispier finish. If the flavour hadn’t won me over, this definitely did. 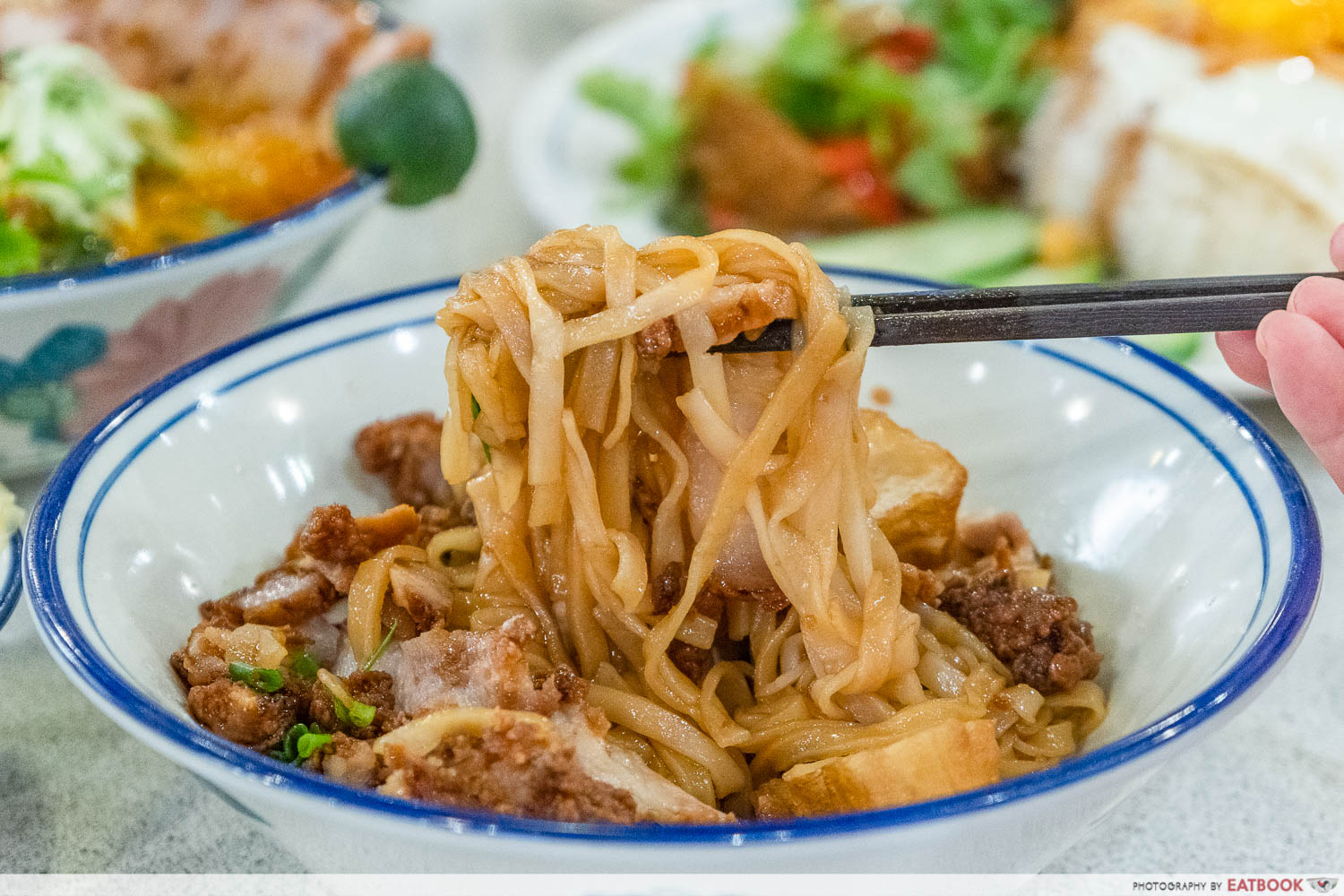 The kway teow they use at this Singapore outpost is sourced locally, due to the perishable nature of this rice noodle. David tells me that it doesn’t compare to what he gets back home, but they make do. I enjoyed the savoury, lard-fragranced sauce it was tossed with; the slippery, soft noodles were a pleasant contrast in texture to the crisp, thinly sliced pork belly.

In keeping to the authenticity of this dish, David even brings in a specific fermented light soya sauce from Malaysia, which he uses in the food. It’s the exact same soya sauce his grandfather used, and it’s also available at the stallfront, should you require more flavour in your meal. 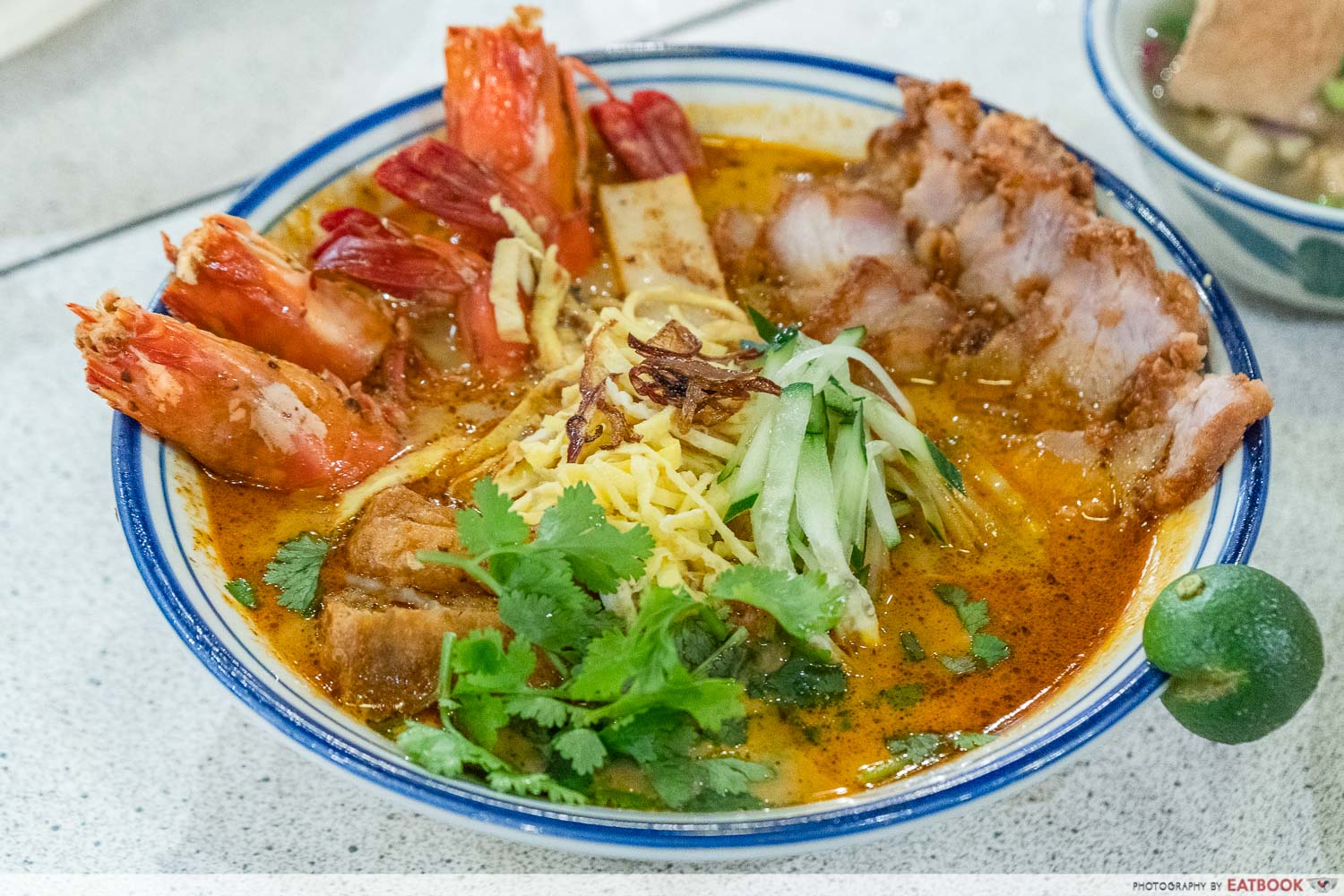 Next, we had Sarawak Laksa with Tiger Prawns ($12.50), another East Malaysian speciality. It sounds pricey, but this portion was huge. You can get it without the prawns ($9.50) to keep your meal here sub-$10! 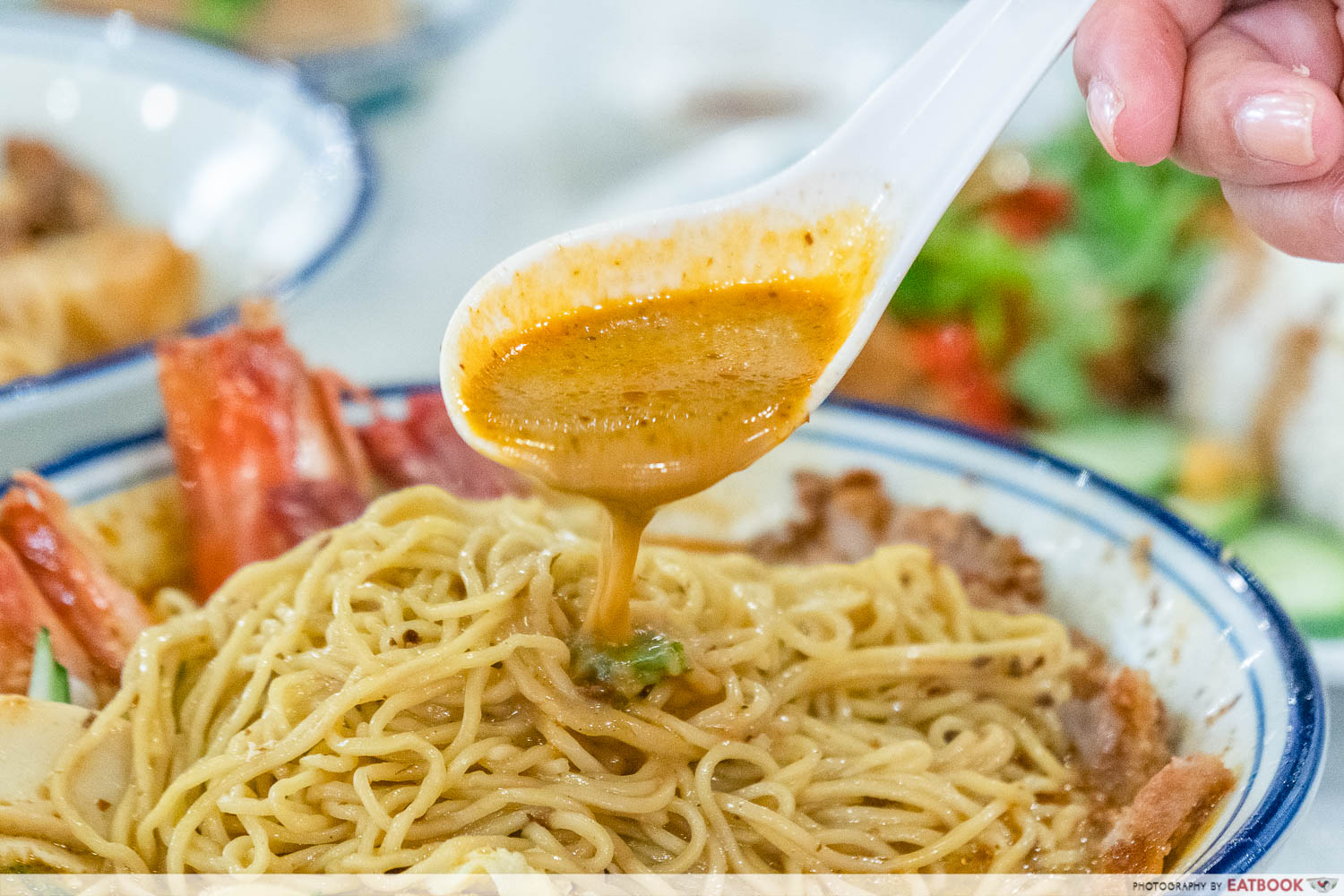 Instead of the traditional thin bee hoon, we had it with mee kia, which was a pleasant switch. If you’ve not had Sarawak laksa, don’t expect the same creamy, lemak, curry-style laksa we’re used to. It features a more delicate nose that’s slightly spice-forward—as in herbs and spices—brightened with assam and a squeeze of fresh lime.

The rempah for this dish is not made by Ah Yen Traditional Fried Pork; David gets it from a ‘famous supplier’ back home who makes it specially for him. 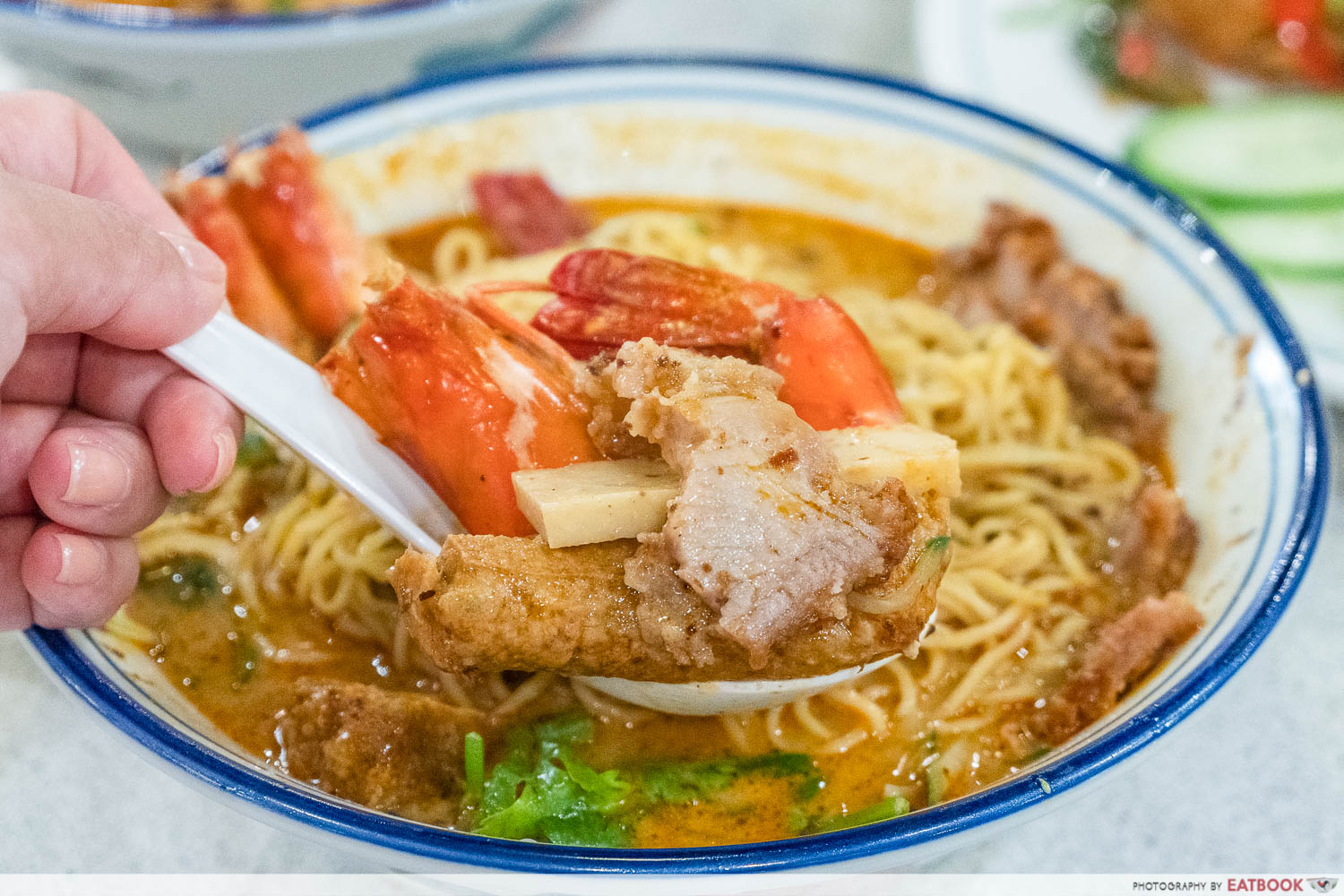 Large, fresh tiger prawns and more of that fried pork belly dress up this dish, alongside garnishes of coriander, sliced omelette, tau pok, and fish cake. The pork belly added extra flavour to the dish, but as expected, got soggy pretty quickly. I also wished the prawns came peeled for convenience. 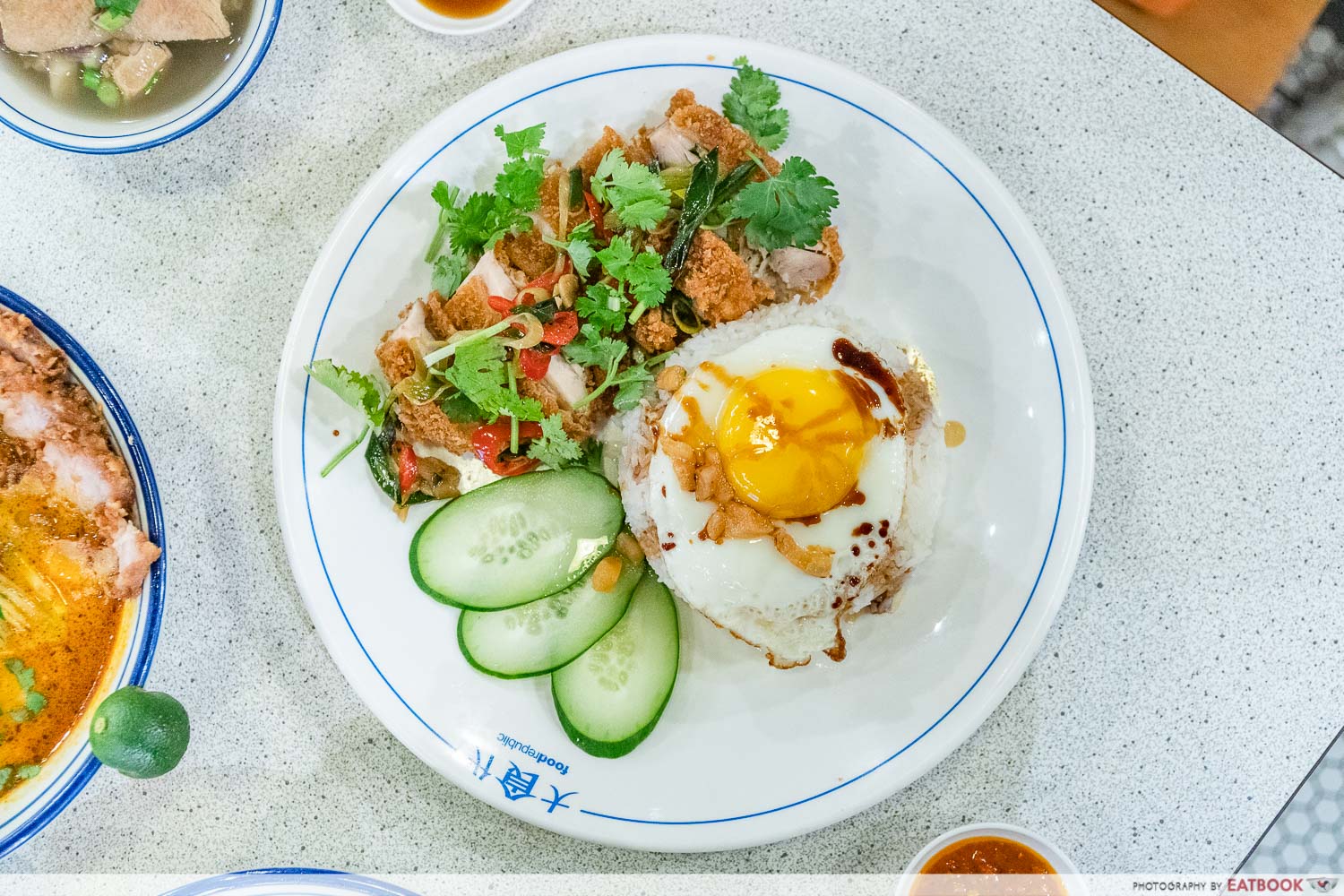 Don’t miss the Salt & Pepper Chicken Rice with Fried Egg ($7.50), which I can see myself ordering again down the road. 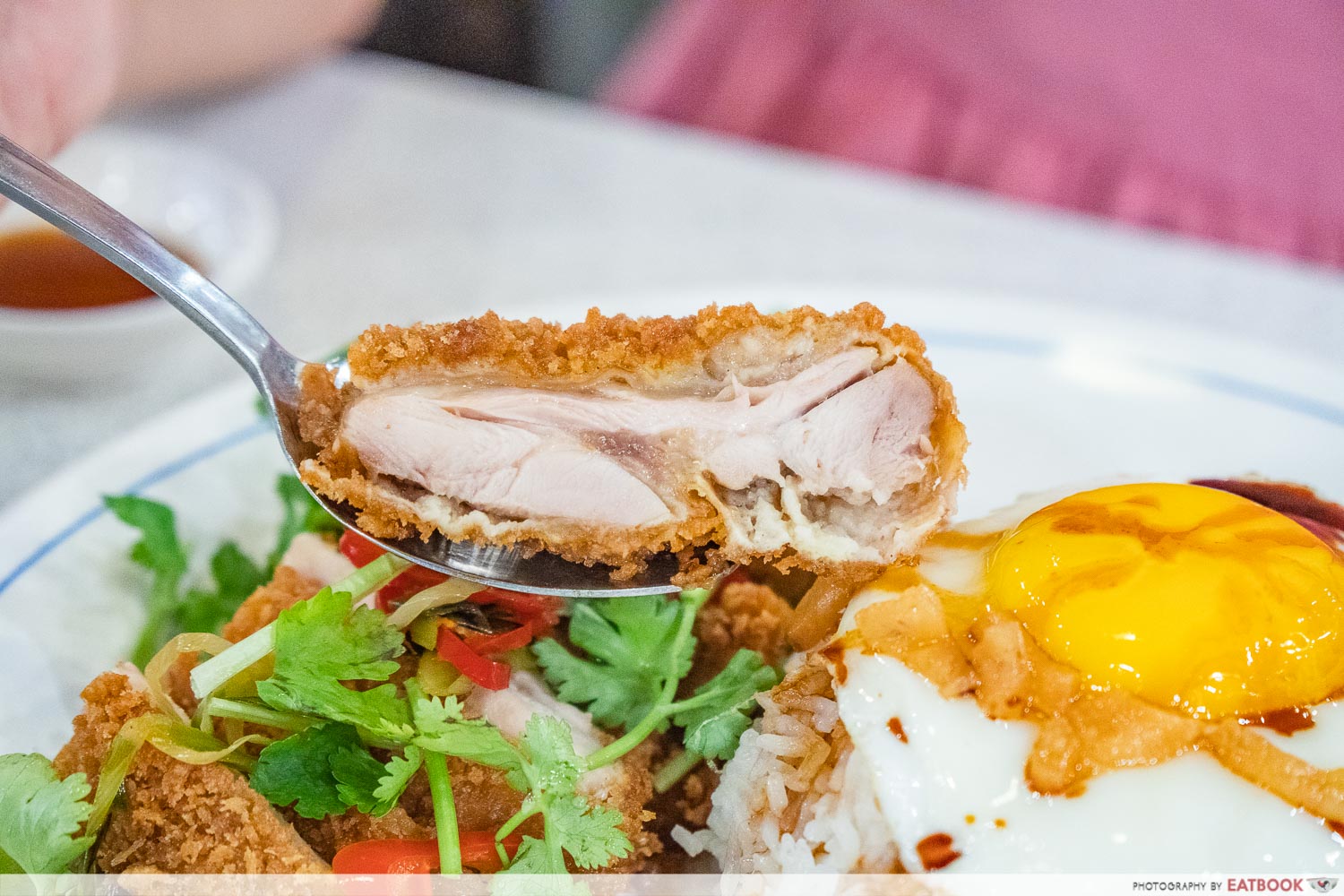 It’s no ordinary fried chicken cutlet on rice: fresh Malaysian chicken is battered and fried, then dusted with Sarawak pepper and salt. 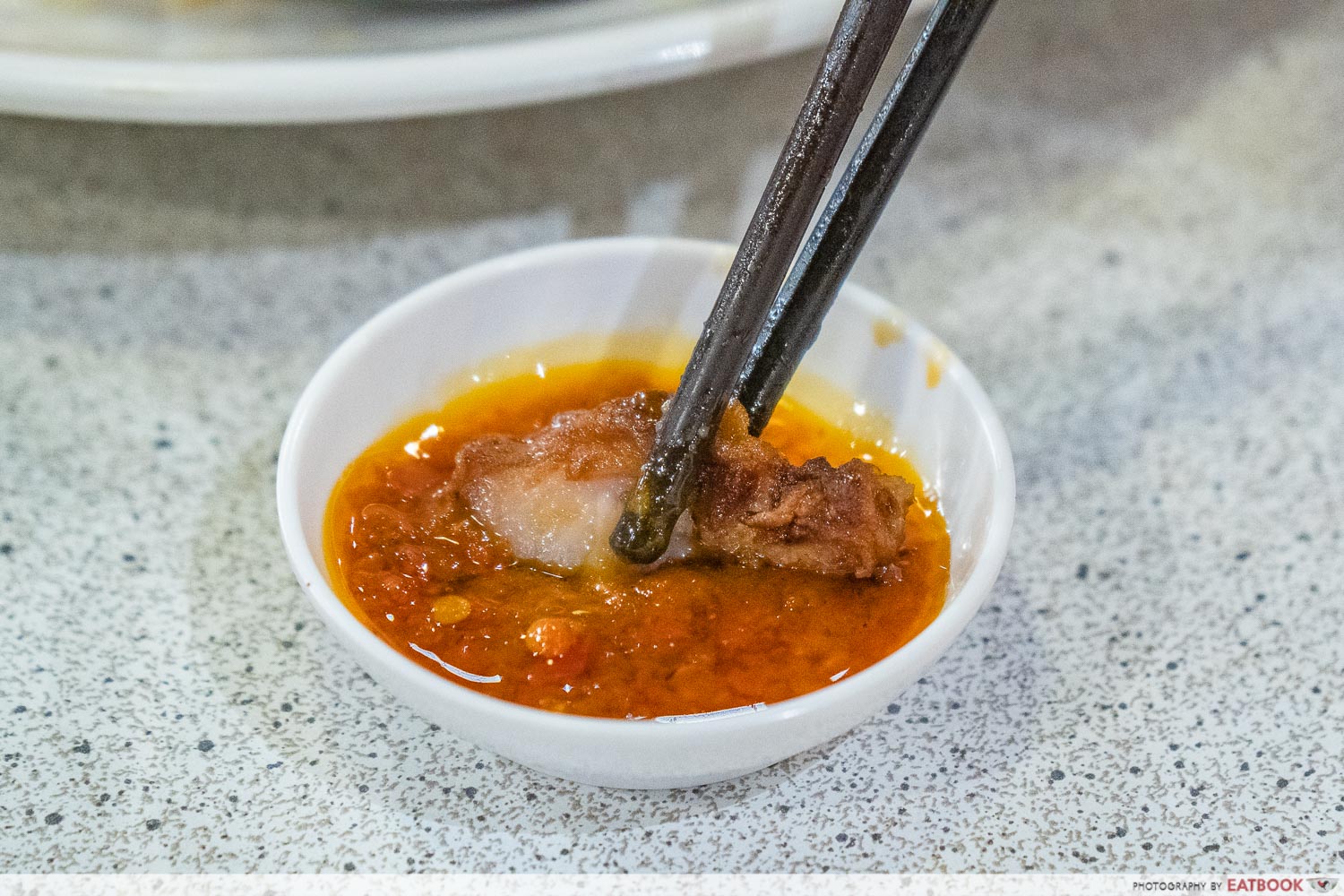 Dip it into the super yums, house-made chilli that’s self-service at the stall for extra shiokness—the chilli is freshly cooked every few days, with a zing that makes it appetising. If, like me, you go for the sesame oil-based sauce that’s drizzled over chicken rice, you’ll like the flavoured rice here. It’s aromatic with a trio of shallot, sesame, and lard oil, lashed with their special soya sauce, and then sprinkled with house-fried lard puffs. Cut a runny yolk in, and it’s the 猪油捞饭 (zhū yoú lāo fàn) of my dreams. 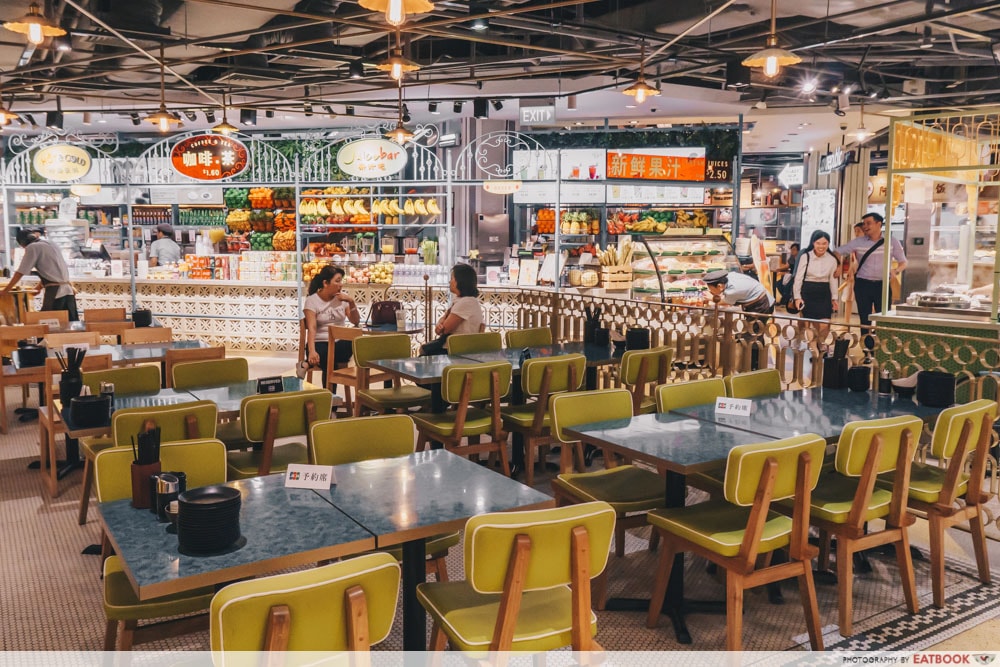 Ah Yen Traditional Fried Pork is located on Level Four of Wisma Atria, within the Food Republic food court—or right next to Orchard MRT Station, making it extremely conveniently located. There are ample seats to go around, but it also gets quite crowded at meal times—come at off-peak hours to avoid the office crowd. 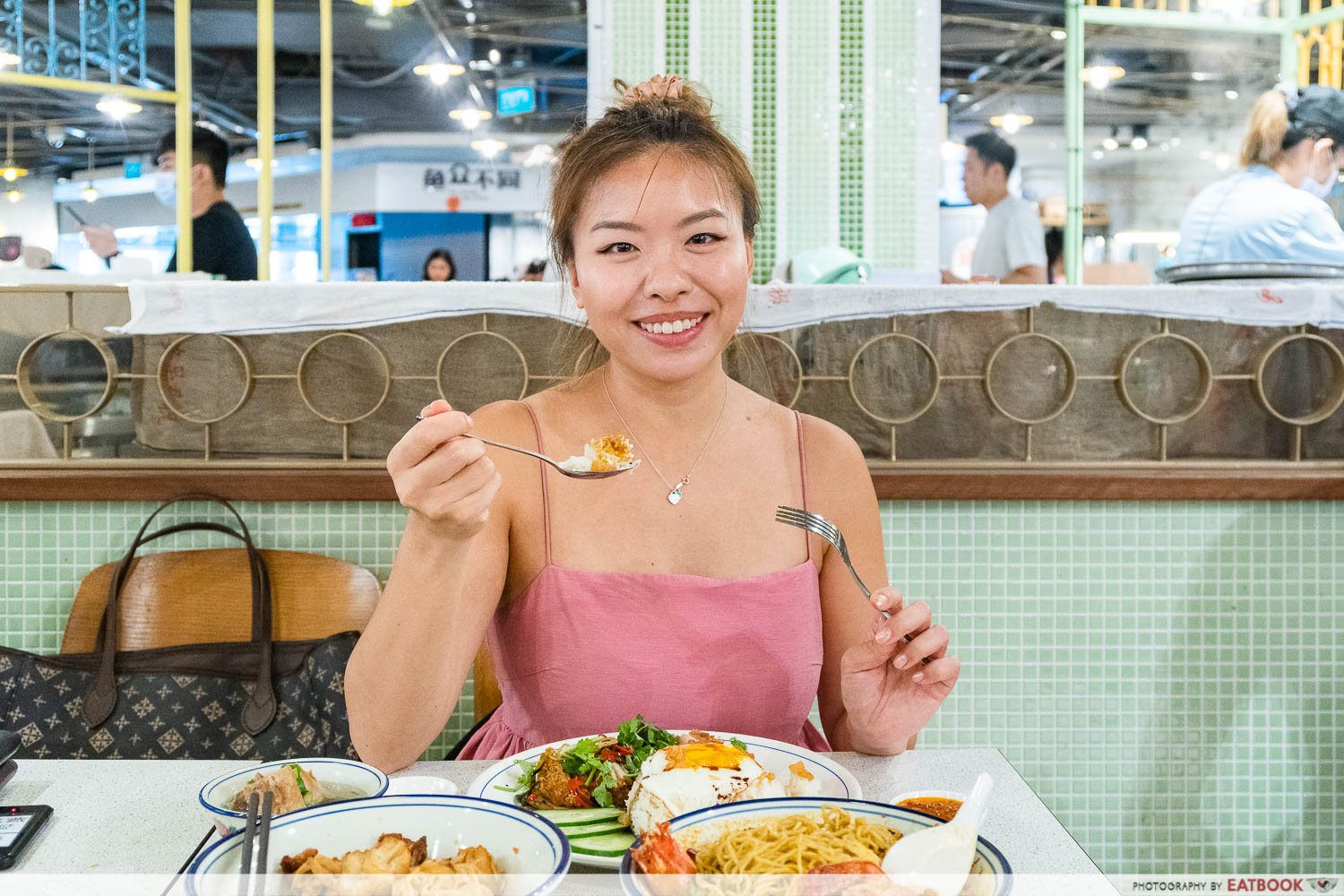 My dining companion found some of the food slightly salty, but it sat alright with me. If the lines in front of the stall at lunch time when we were there are anything to go by, I guess I’m not alone in thinking so. I actually quite enjoyed the kway teow and chicken rice, in particular, and I’d definitely come back to eat this again.

– Some items were a little salty 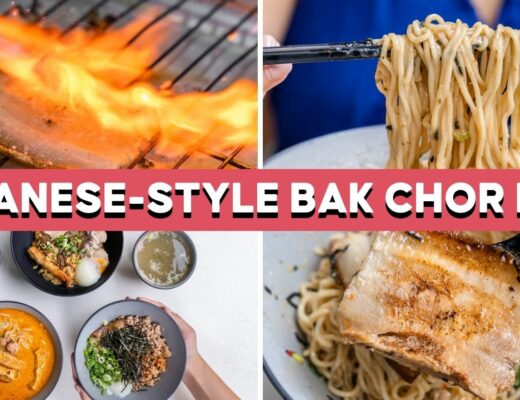 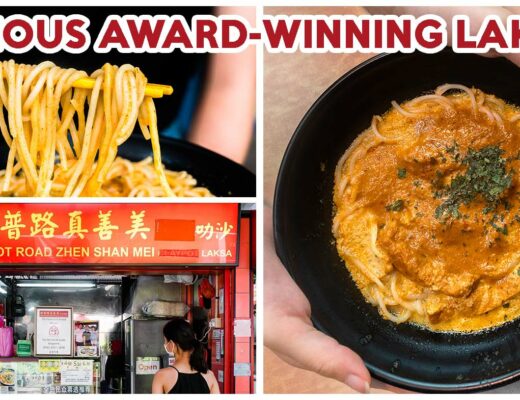 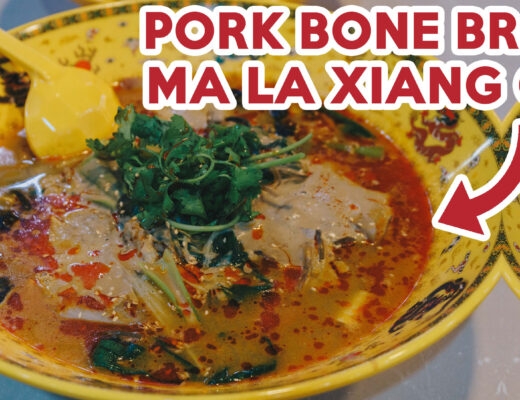