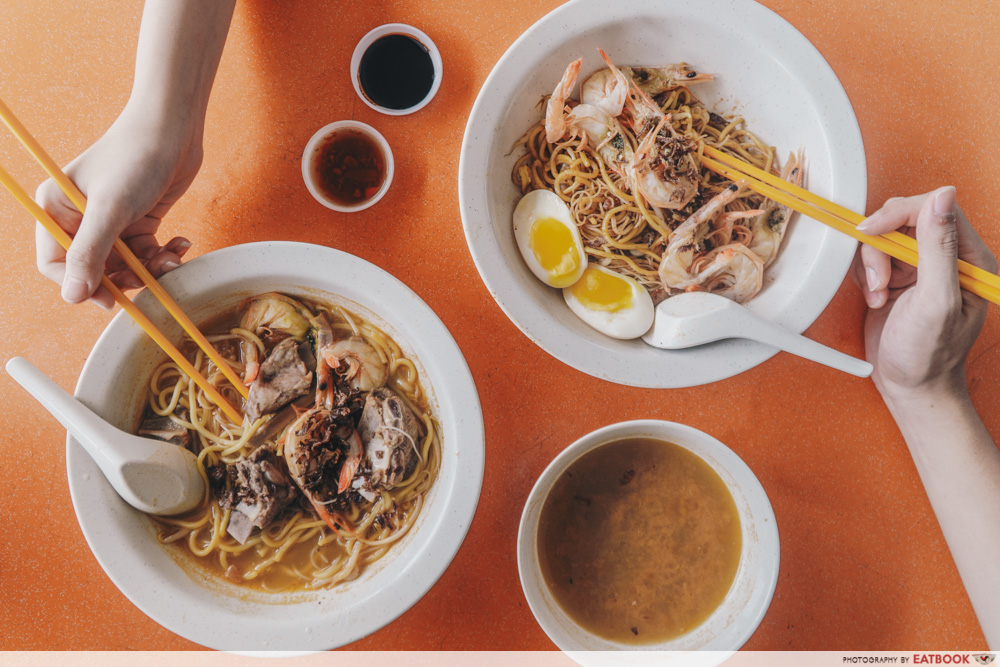 Quality food and favourable locations have always been the two factors I thought were most important when it came to a successful F&B business. Tucked at a far end of the island, Big Prawn Noodles was one of the places I never imagined would thrive. Yet, I couldn’t stop reading about the snaking queues that this stall was drawing since their opening and when we finally visited, I was convinced that good food alone can do wonders. 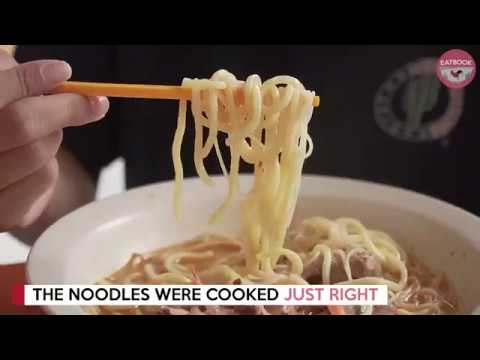 As with most prawn noodles stalls, you can choose to have your noodles served dry or in soup. We opted for the latter to go with the Pork Rib Prawn Noodle ($5). With a mix of thin bee hoon and yellow noodles sitting at the bottom, the huge bowl was brimming with a thick orangey broth, generous amounts of big prawns, and a spoonful of fried shallots. 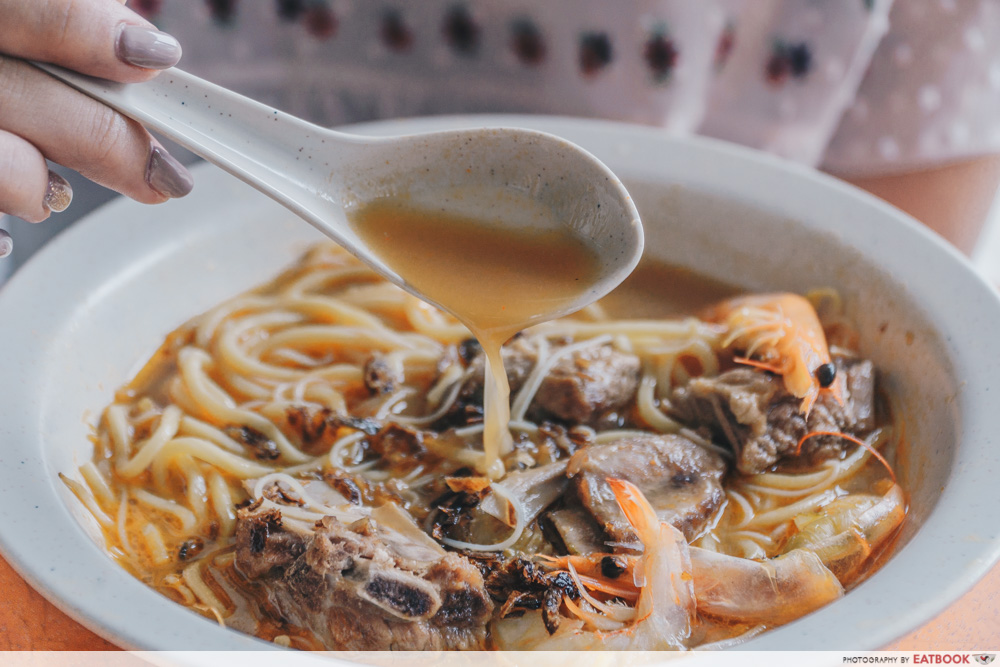 The strong aroma of the prawn broth alone assured me that I would not be disappointed and when I took the first spoonful, I was right. The broth was flavour-packed with a hint of spiciness hitting first followed by sweetness coming from the seafood. 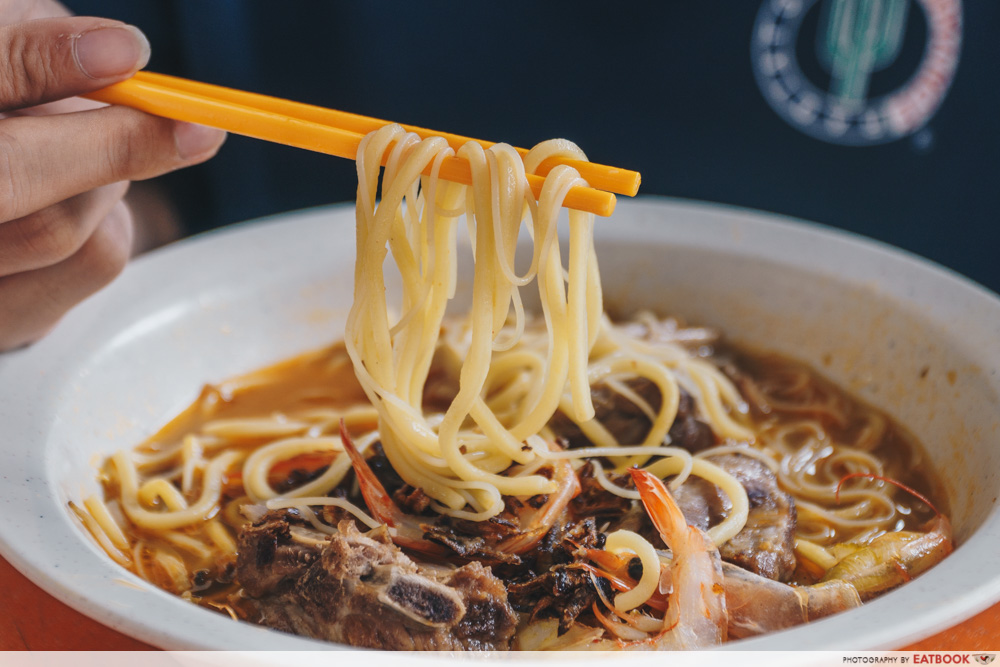 The bee hoon absorbed the full-bodied broth well and I liked how the yellow noodles were thin yet had a good amount of bite and springiness. It was also not overly starchy and added a nice texture to the bee hoon. 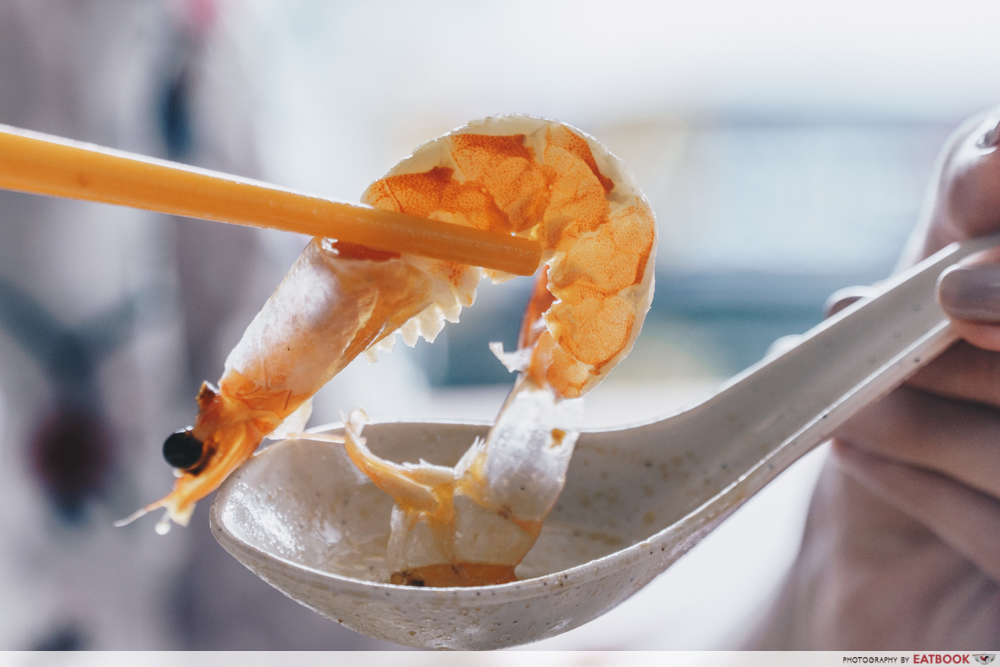 With the noodles and soup being more than satisfactory, the big prawns similarly lived up to my high expectations. Besides being huge, they also came in generous amounts – making it well-worth the price.

A bonus was how the prawns were sliced into two, allowing the process of munching the flesh off the shell to be a hassle-free one. The roe found in the prawns also added another element of surprise to the dish. 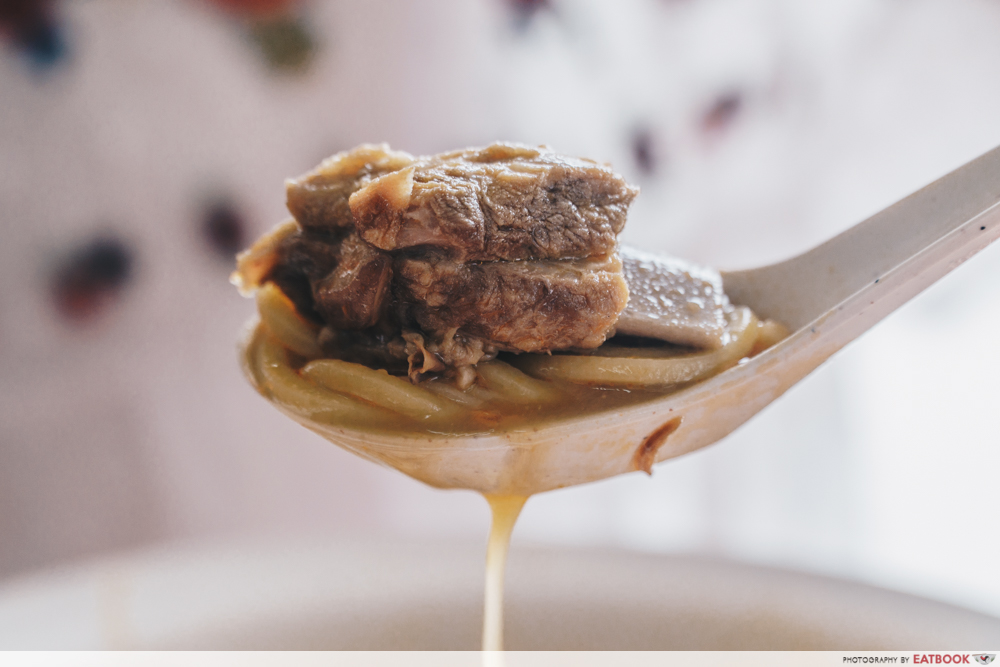 If there was something to improve on, it would be the pork ribs. Though the pork ribs were decently prepared and came in a huge portion, they lacked texture probably due to their lean cuts. Certain parts were tough to chew on and I would have liked it better if the ribs were laced with bits of fats. 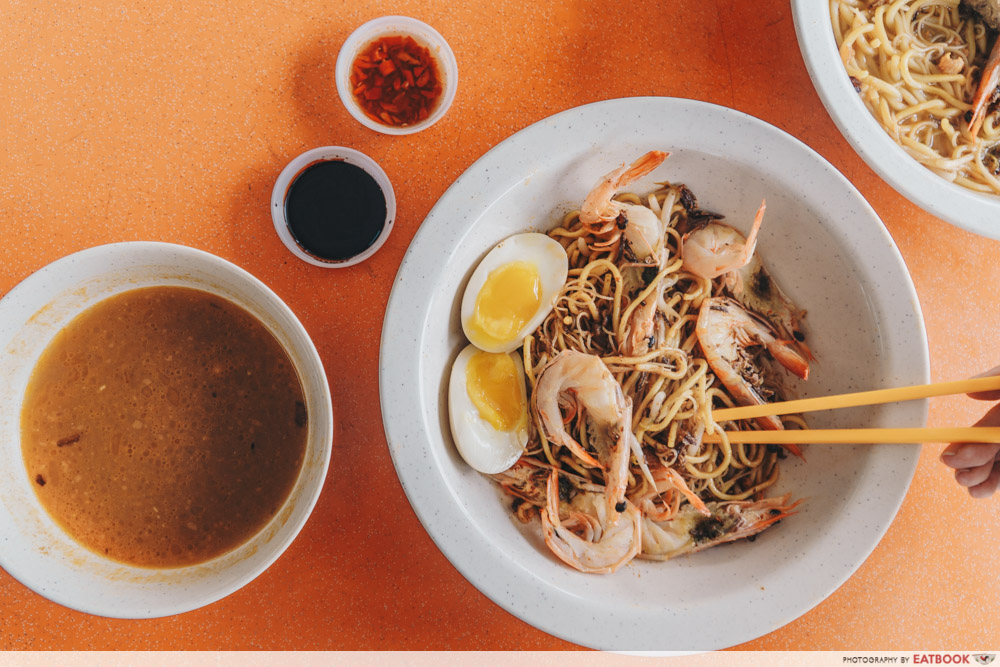 The other item we tried was their Big Prawn Noodle ($5) where we chose to have bee hoon and yellow noodles tossed in chilli sauce. We were also drawn by the Creamy Egg ($1) advertised on their storefront and ordered it as an add-on. Sliced into two halves, the creamy egg was simply hanjuku egg. Slightly runny and without much taste, we were disappointed by how it hardly added to the taste or texture of the dish. Definitely something that we’ll give a miss the next time we visit.

The number of prawns in the bowl was even more than that of the previous bowl and also came with a separate bowl of rich broth. Tossed in a mixture of sauces, the noodles were primarily sweet with a hint of saltiness and spiciness. 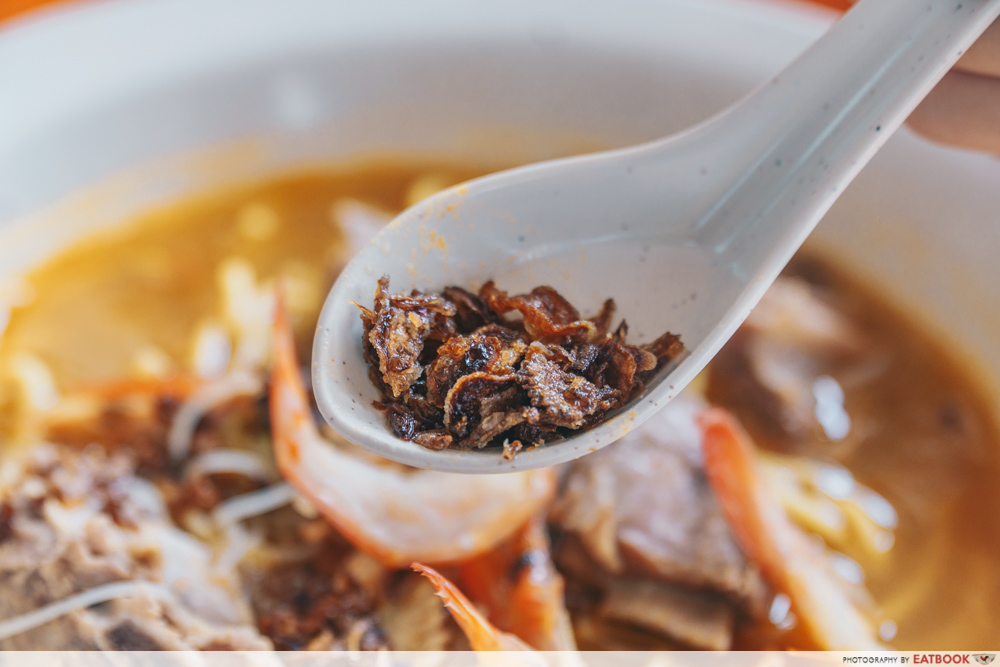 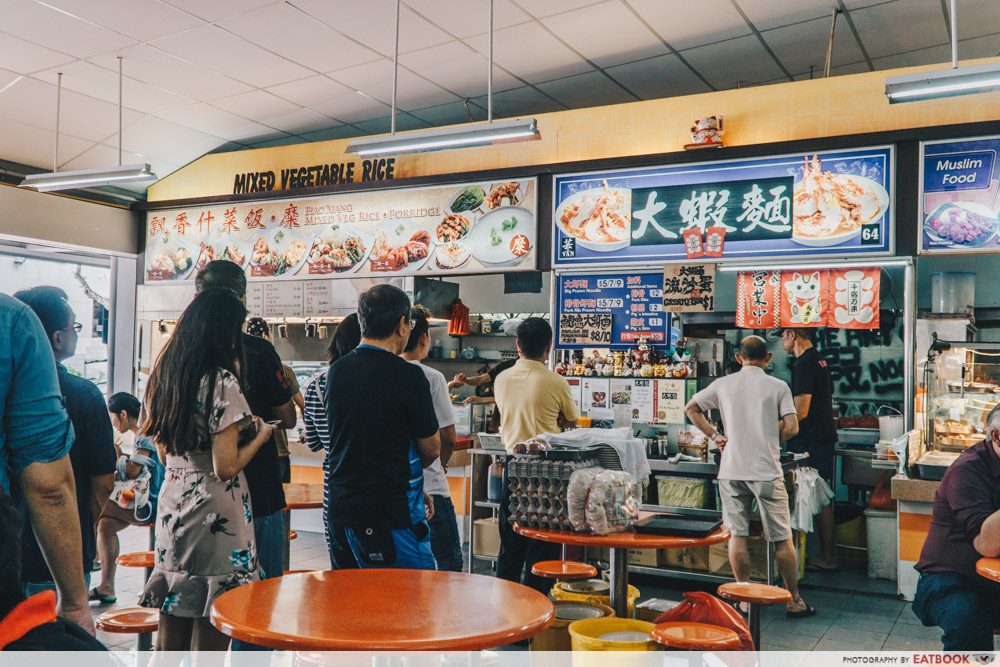 Big Prawn Noodles is tucked at the far end of Loyang Way Food Village – a short distance from Changi Airport. Despite being inaccessible to most people, the food court is constantly packed with office workers.

Besides the location, another thing you should prep yourself for is the long waiting time. With a relentless queue spotted at the stall daily, getting your hands on their prawn noodles may take up to 30 minutes at times! The food at Big Prawn Noodles is the few in Singapore I’d say is worth the travel and queue. While both the soup and dry versions of their prawn noodles were satisfying, the former takes the cake for me. The full-bodied broth was the highlight and having a huge bowl of it with noodles was the best way to enjoy it!

Photos taken by Angeline Ngiam
This is an independent review by Eatbook.