7 Kampung Admiralty Hawker Centre Stalls That Can Fill You Up At $5.50 Or Less - EatBook.sg - Local Singapore Food Guide And Review Site

7 Kampung Admiralty Hawker Centre Stalls That Can Fill You Up At $5.50 Or Less

Pardon my ignorance but when I first read about the opening of Kampung Admiralty in the newspaper, the first thoughts that came to my mind were, “Where even is Admiralty? What is there to do at that place?”

Even though its label as Singapore’s first retirement community with medical services, childcare and eldercare centres all in one building sounds impressive, it was still not convincing enough for me to travel all the way to the North. That was before I heard about Kampung Admiralty Hawker Centre. A hopeless foodie and fan of hawker dishes, I visited the hawker centre to check out the stalls and here is a list of seven stalls that will make your travel to the North worth it! 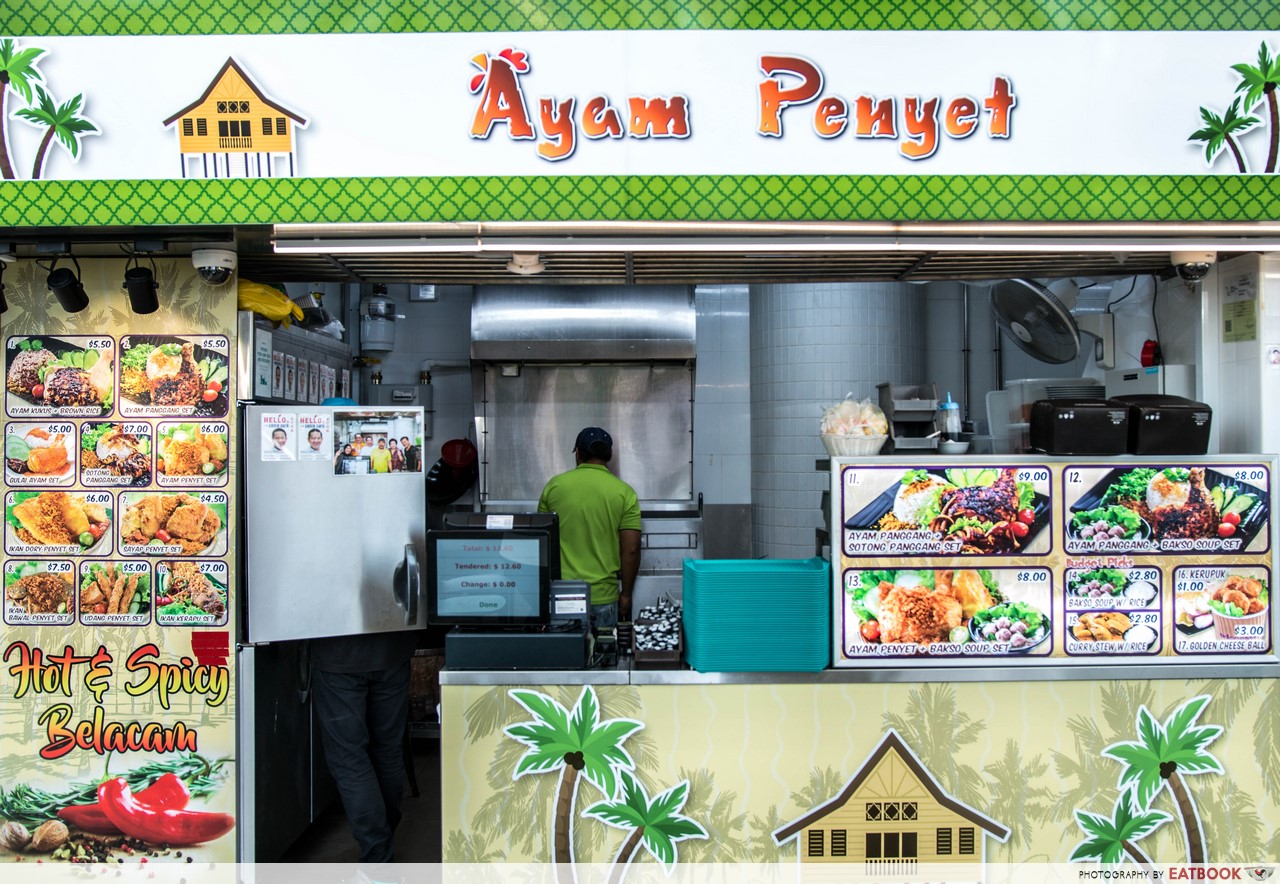 Sandwiched in the middle of a row of Malay and Indian food stalls is Ayam Penyet, a stall that specialises in fried and grilled dishes including Ayam Penyet ($6), Udang Penyet ($5), and Sotong Panggang ($7). 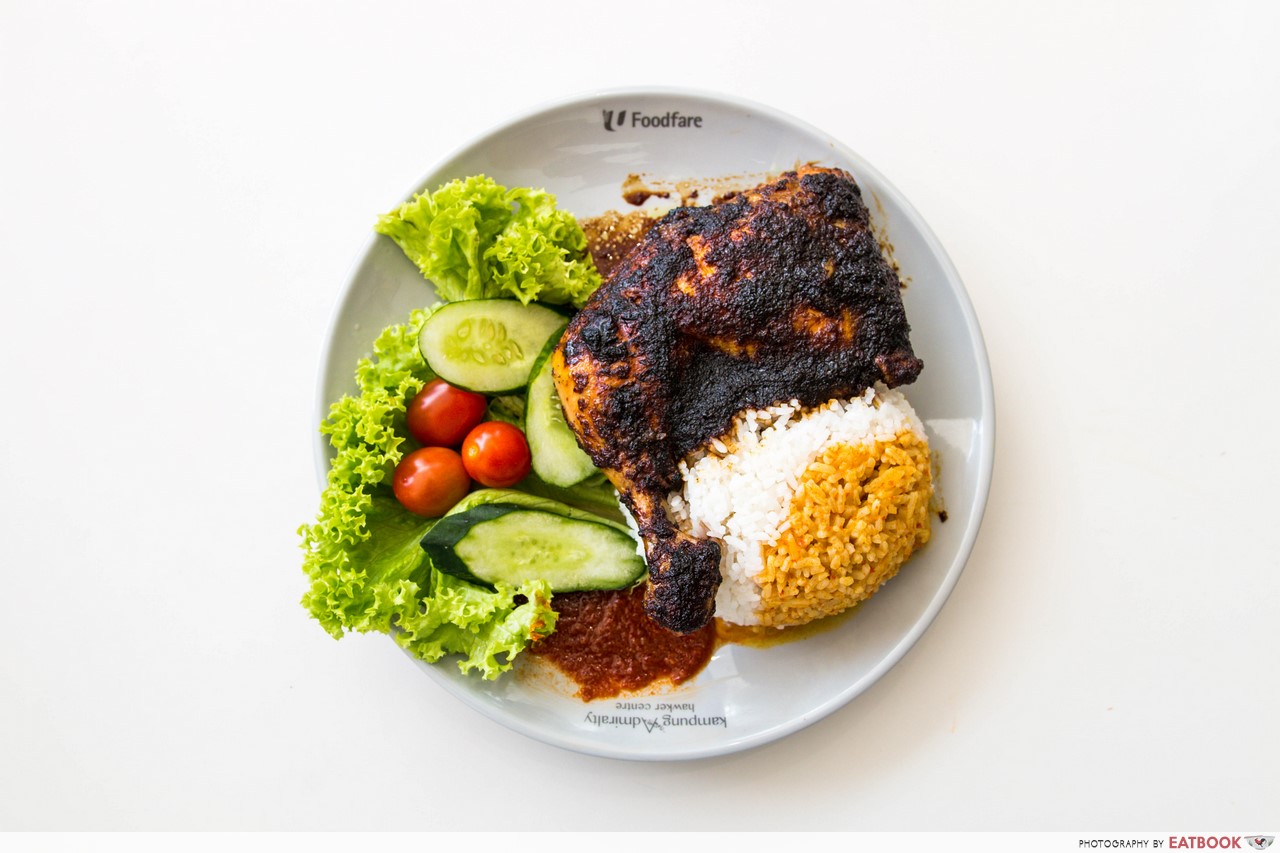 Although the stall is named Ayam Penyet, we were told to try their speciality, Ayam Panggang ($5.50).The plate comprised of a heap of white rice drizzled with curry sauce and a huge chicken thigh that was grilled on the spot. 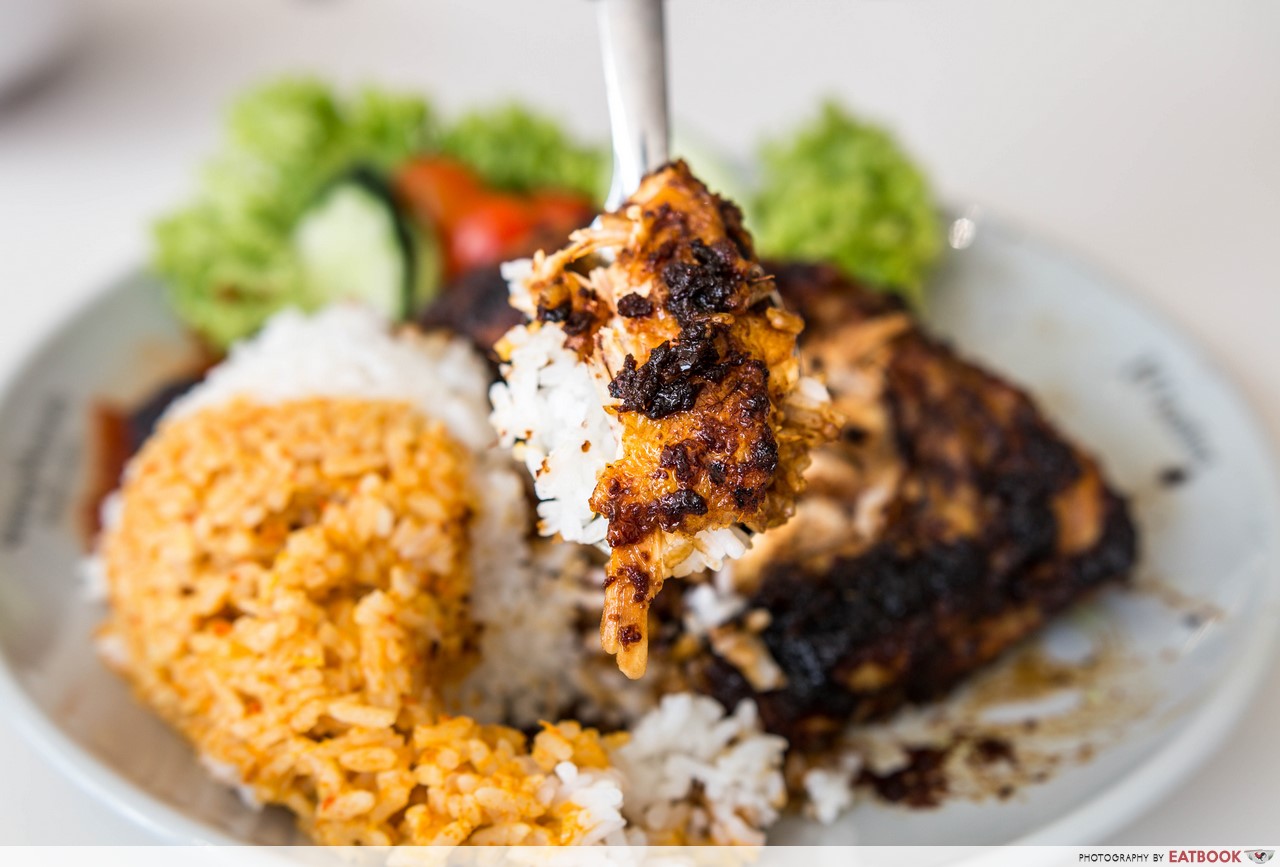 Covered with a layer of spices and sweet soy sauce, the chicken thigh was marinated to the bone to give a sweet, spicy, and savoury taste. Despite the size of the chicken thigh, I had no problem remaining clean while polishing the entire dish as the meat came off easily. In terms of taste and portion, this dish was definitely a steal. While hawker stalls are usually cluttered with multiple woks and filled with smoke coming out from the stall, you can expect to find San Yi Xuan spanking clean. Unlike the usual stalls that cook their dishes on the spot, San Yi Xuan prepares their rice sets in bamboo tubes beforehand and leaves them inside a gigantic steamer. 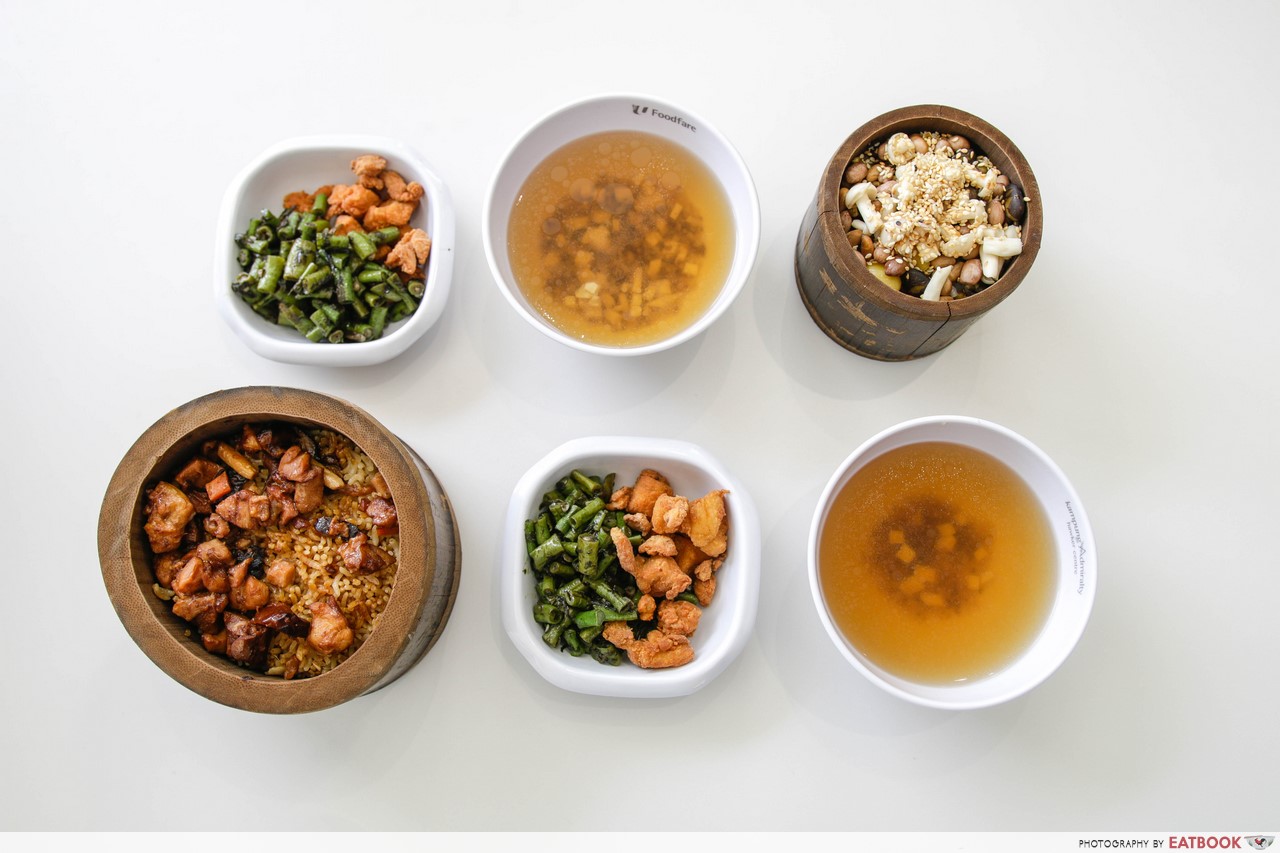 A must-have at the stall is their Mushroom Chicken Rice ($3.50). With mushroom and chicken sitting on top, the rice was moist, generous in portion, and well-flavoured. Even without the ingredients, the rice was tasty on its own and reminded me of a combination between claypot rice and yam rice. 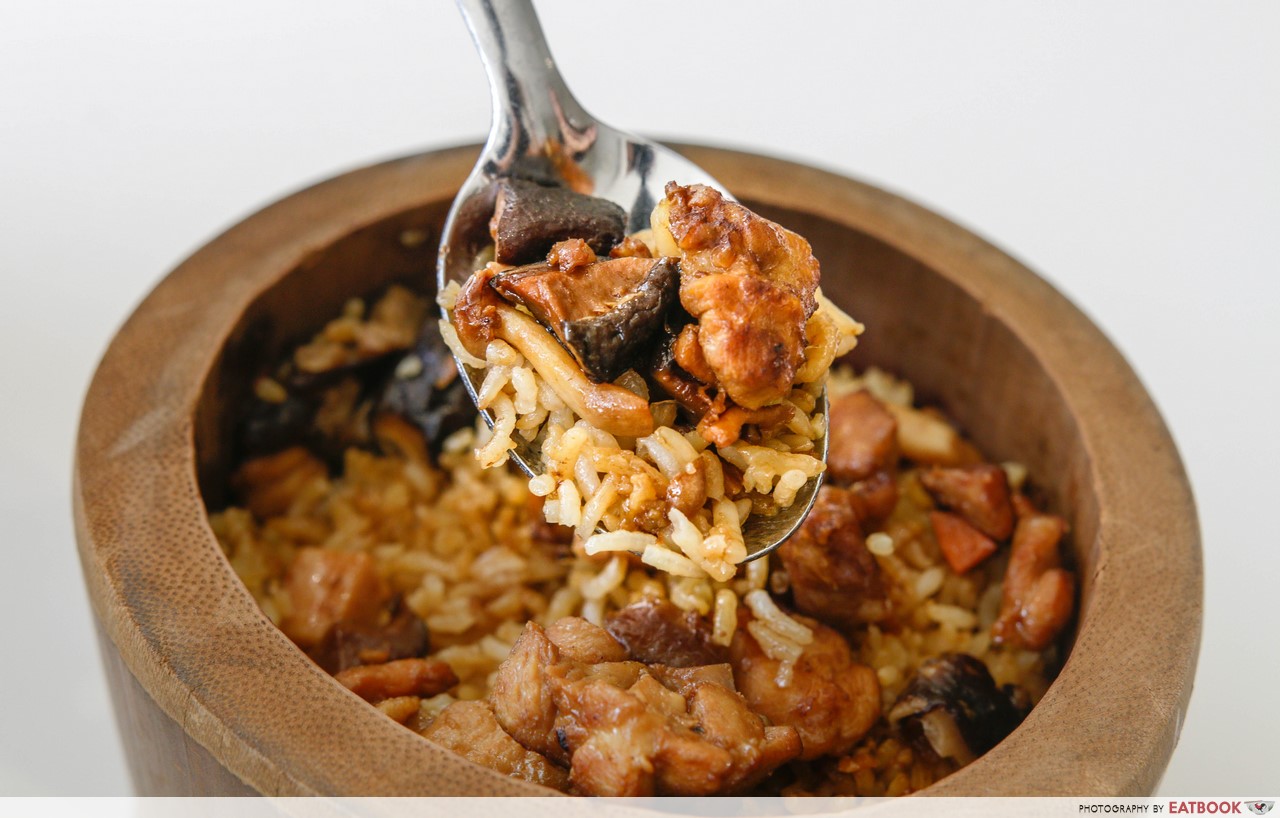 For vegetarians, they also have options such as Vegetarian Rice ($2.80) that comes with a variety of beans. Each bamboo tube rice set also includes a bowl of mushroom soup and two side dishes of beans and fried chicken bits! 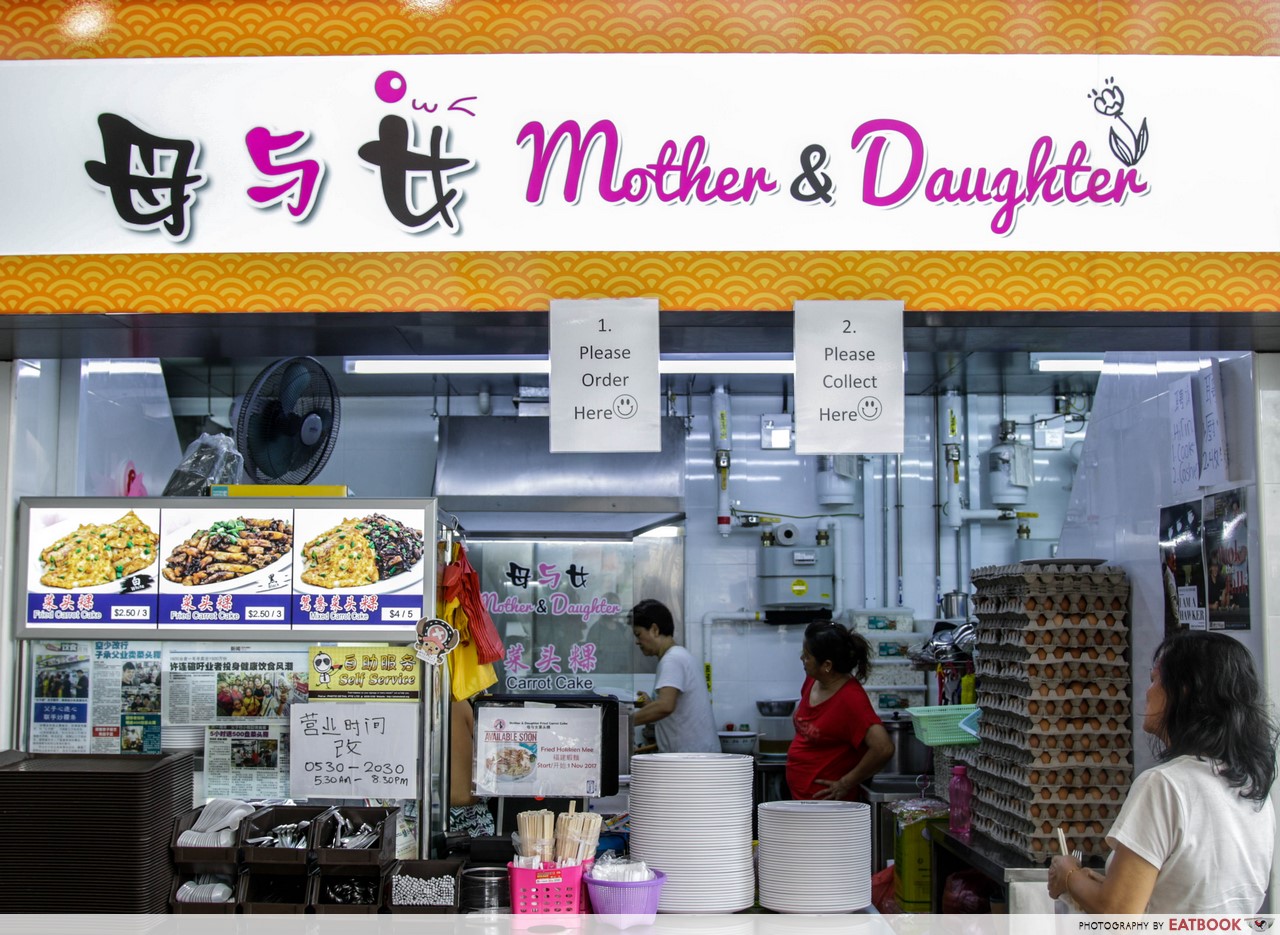 When dining at hawker centres with my family, a must-have dish to share is fried carrot cake. However, I am the only one in the family who prefers the black to the white version and it is often frustrating to have to submit to the majority’s favourite. I was therefore delighted to find that Mother & Daughter offers the best of both worlds, in a single plate. 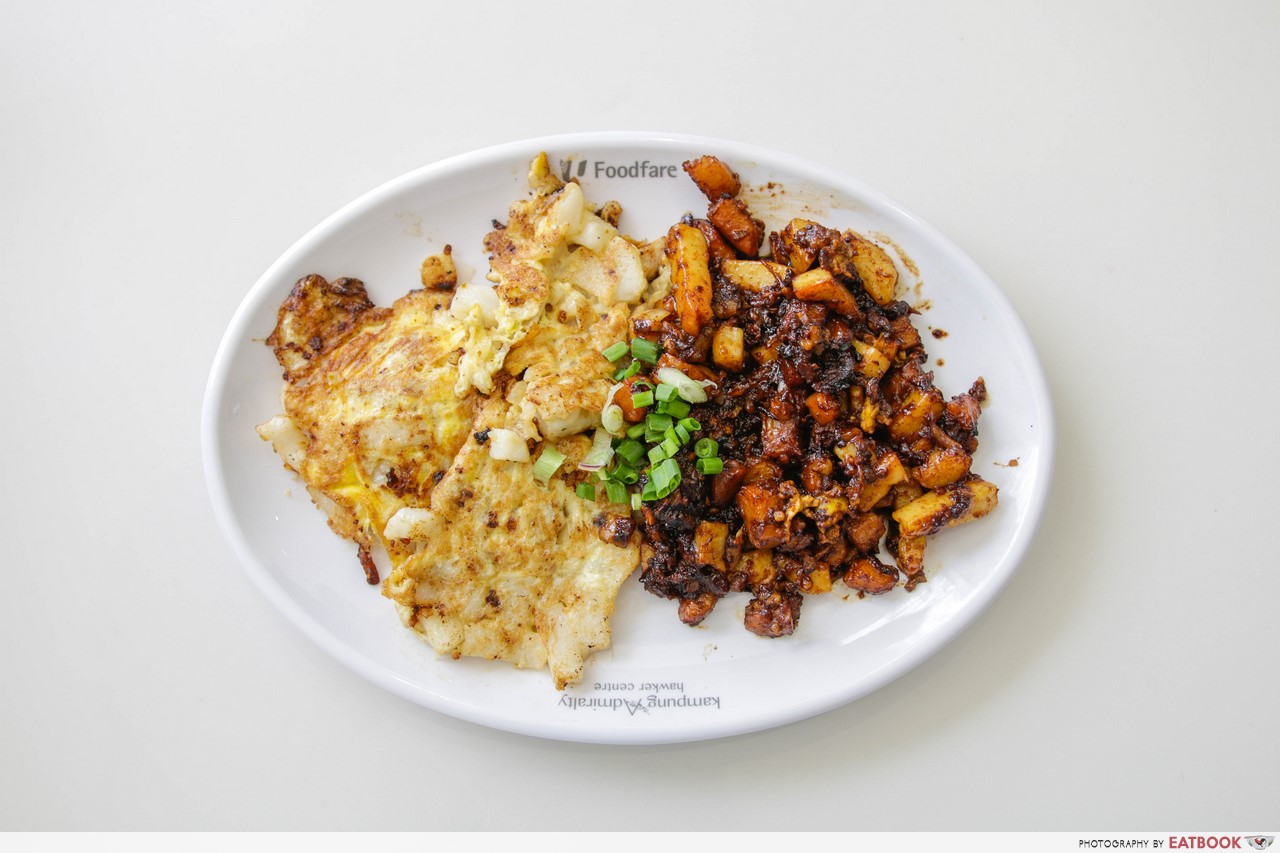 Run by a young lady and her mother, the stall offers Mixed Carrot Cake ($4/5) where both white and black carrot cake are served together. For the white version, the carrot cakes came in huge chunks, held together by a layer of fried egg. While the white one resembled an omelette, the black one was more chopped up, with the eggs scrambled up. Although I found the portion a little small for its price, the taste was not lacking. The white carrot cake was slightly bland compared to the intensely sweet and salty black version. Having them together, however, was an unexpectedly pleasant experience. 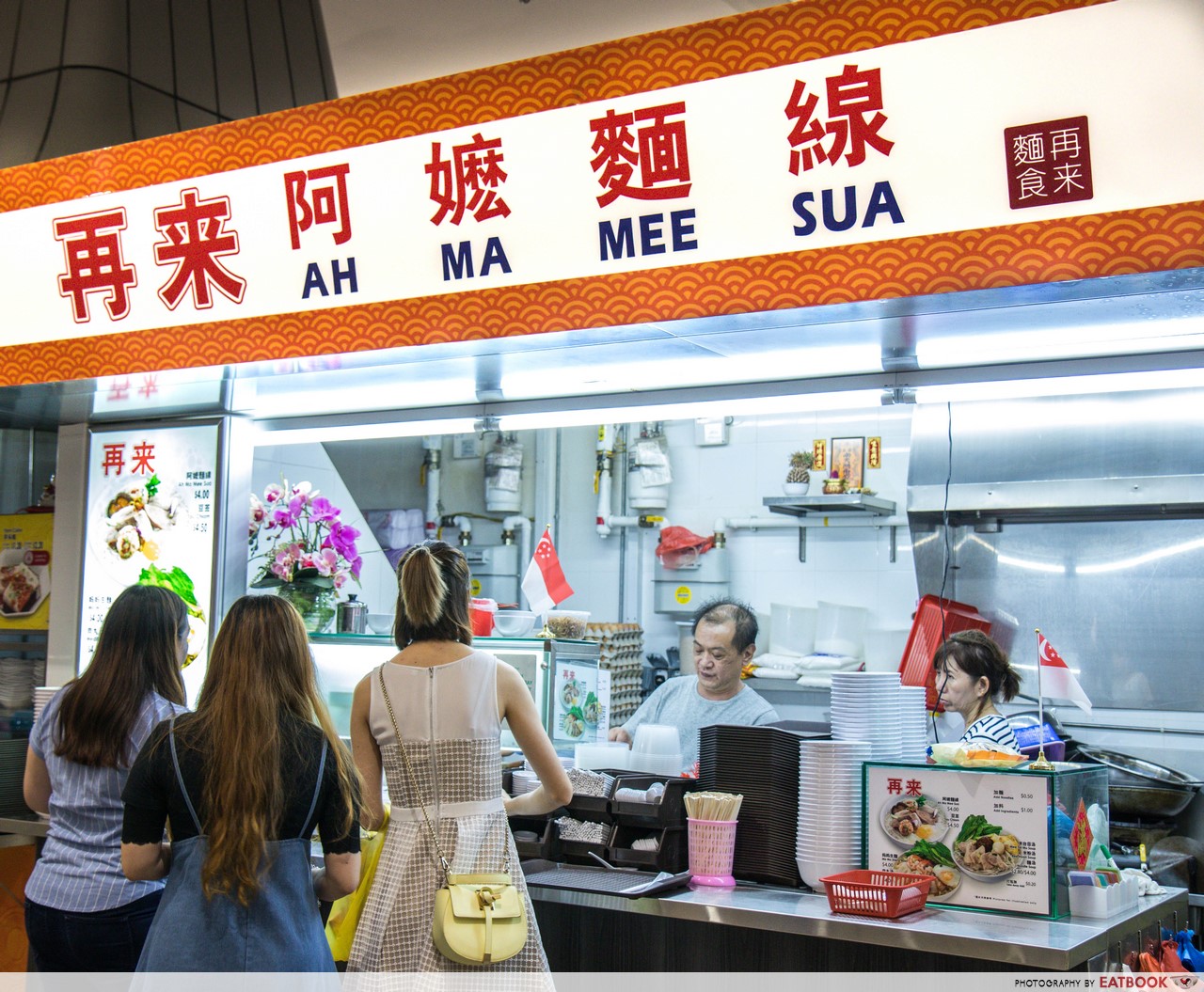 Of the 43 stalls in the hawker centre, one stall that is impossible to miss is Ah Ma Mee Sua. With a relentless queue that did not cease until the late afternoon, the Chinese stall sells simple yet delicious noodle soups such as Ah Ma Mee Sua ($4) and Ma Ma Sheng Mian ($4). 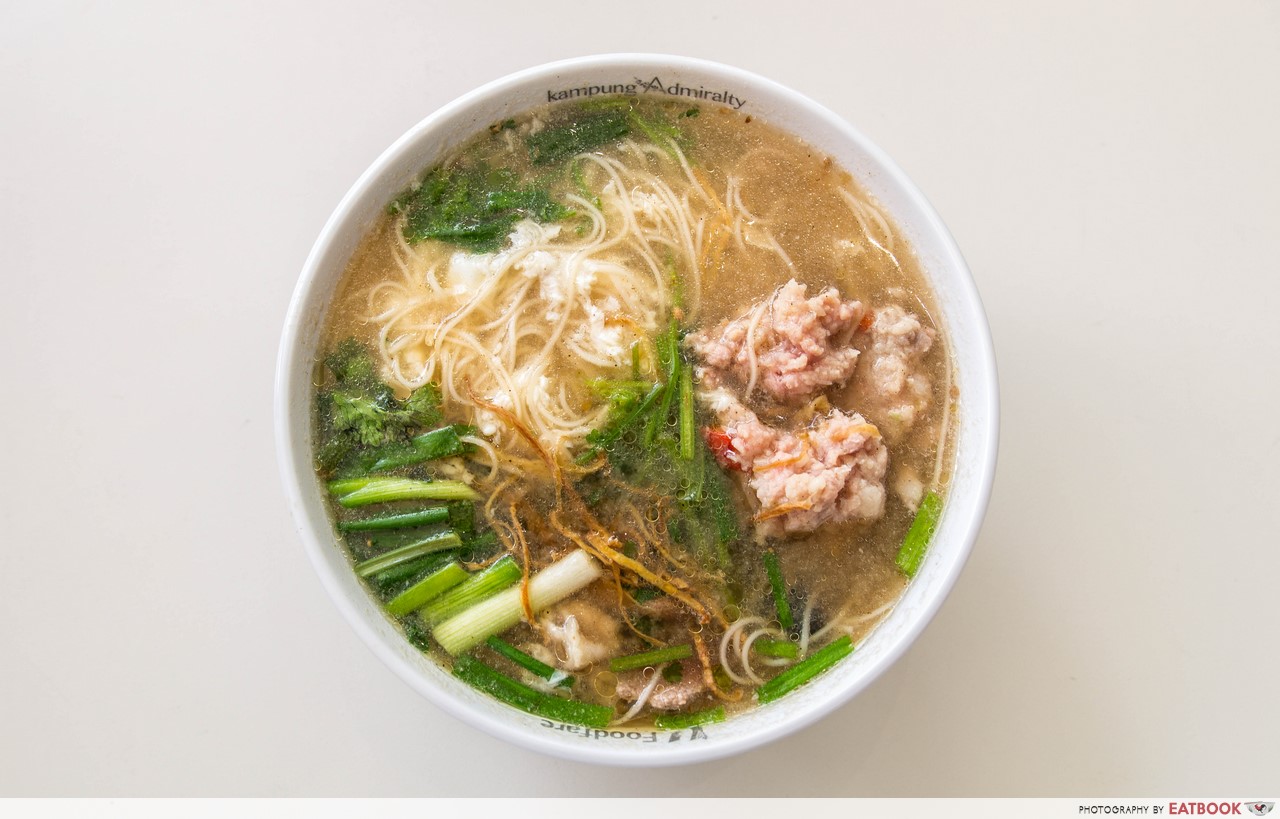 Their signature dish, Ah Ma Mee Sua, comes in a bowl that is filled to the brim with soup, mee sua, egg, minced pork, mushroom, and pig’s organs. For a simple bowl that looked like something even I can whip up at home, I was not expecting much. However, one taste of the soup and I was blown away. With each bowl cooked upon order, the soup was strongly flavoured by the meat and unlike many soups found in hawker centres, this did not even have a hint of MSG taste. The mee sua was also smooth and slightly springy, absorbing the soup well and every spoonful was a delightful experience. 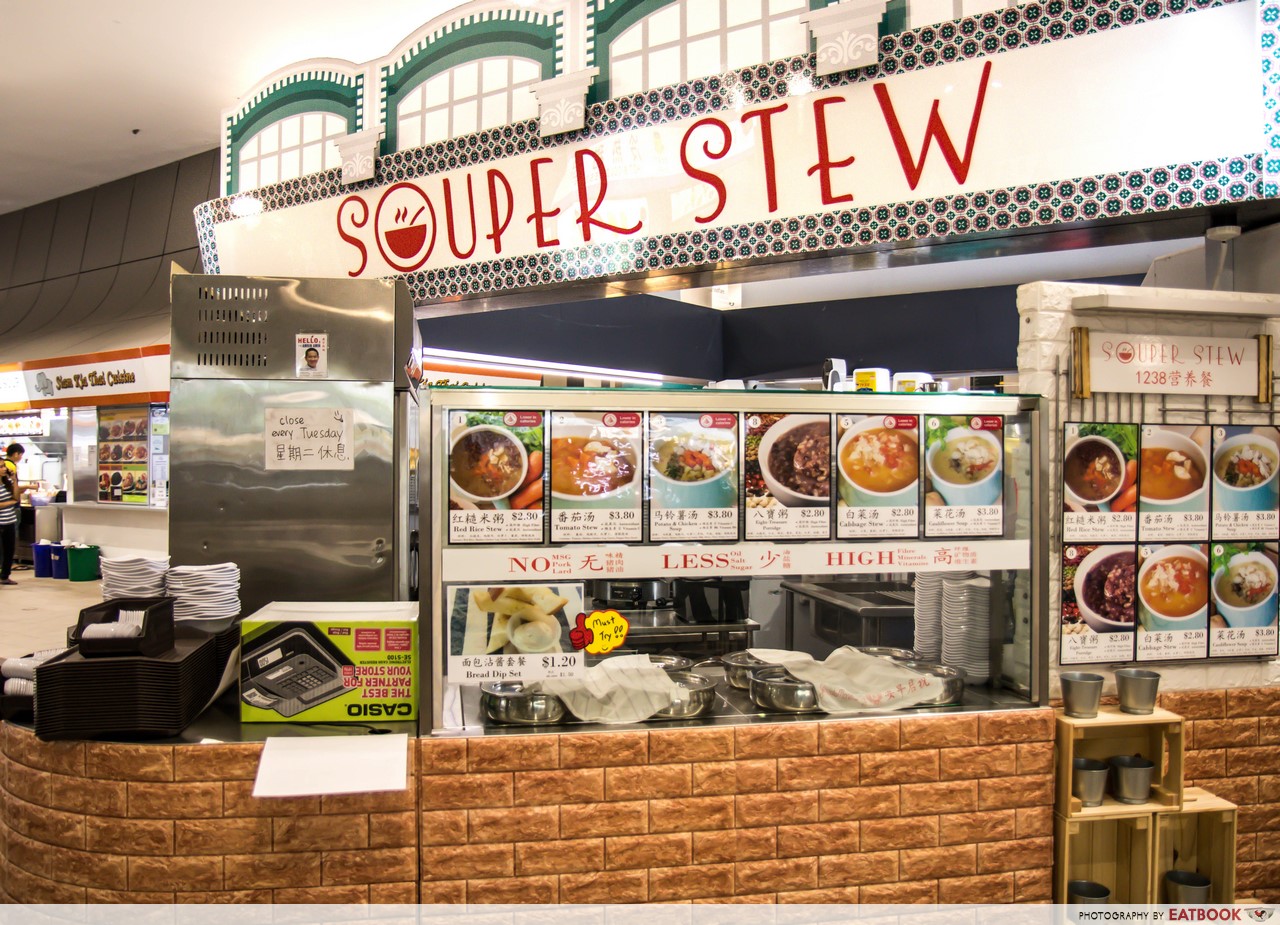 For those looking to maintain your clean-eating streak or simply want something lighter on the palate, Souper Stew offers simple soups that are affordable and healthy. 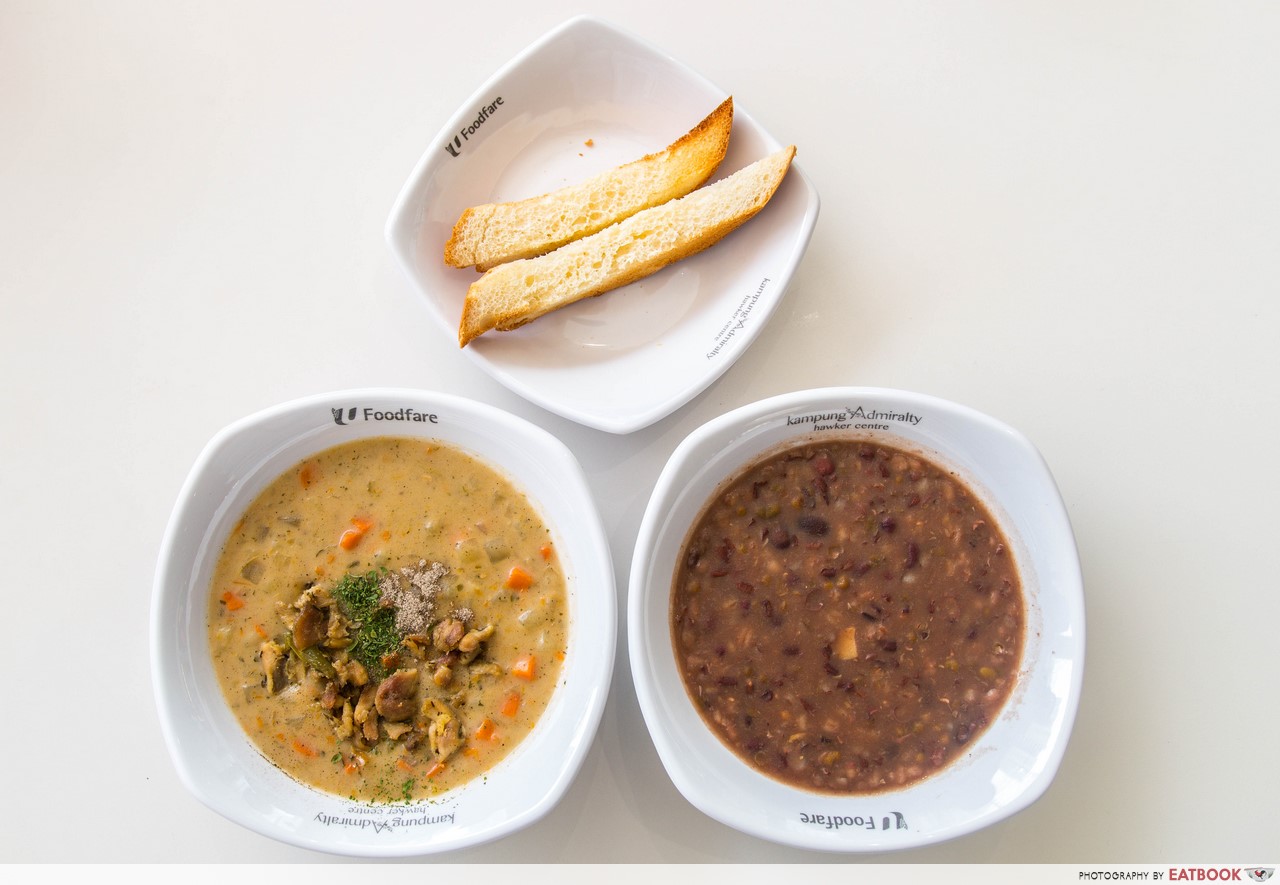 One of their specialties is the Eight-Treasure Porridge ($2.80) that is made of red rice, red beans, green beans, barley, black beans, red dates, longan, and lotus seeds. Of the two bowls we had, I prefer their Potato & Chicken Soup ($3.80). The bowl of creamy soup comes loaded with generous cubes of potato, carrot, and chicken chunks. Though primarily savoury, the soup had a light sweetness that came from their stock that is made from a blend of over 10 different vegetables. Another stall that is constantly spotted with a long queue is Jia Le Yong Tau Foo. Unlike other yong tau foo stalls, Jia Le does not have all their ingredients on display for you to choose from but offers bowls with fixed ingredients. For $5, we got their Happiness Bowl which is a soup bowl with ingredients including tau pok, lady’s finger, brinjal, meatball, and stuffed beancurd. For an additional $0.50, you can also have rice or different types of noodles to go with the yong tau foo. Other than the wide variety of ingredients served in one bowl, each piece of yong tau foo was also generously stuffed with fish paste. While some yong tau foo stalls offer chewy fish paste, the ones at Jia Le are much softer. For those who prefer something heartier, they also serve Curry Yong Tau Foo ($4) and Fried Yong Tau Foo ($5).

Find out more about the young owner of Jia Le Yong Tau Foo! Make your way to the Malay and Indian food zone and you will find most tables at that area having at least one plate of prata from Saamsudeen. Kneaded and fried on the spot, Saamsudeen offers a variety of prata including onion prata ($1.40), cheese prata ($2), and banana prata ($2.50). The stall also has murtabak ($5/7/8) with different fillings to choose from, including chicken, sardine, and mutton. The chicken murtabak was made with an overflowing amount of diced chicken and onions that were sandwiched between two layers of prata dough. Slightly crispy on the outside, the murtabak was mainly chewy and impressively not greasy at all. Complementing the chewiness of the dough, the onions were crunchy and the lean chicken bits also added to the variety of textures. Whether you are one who can never decide between black or white carrot cake, one who is more health-conscience, or one who craves for a variety of cuisines, it is probably impossible to not find something you will like at the 43 stalls found in Kampung Admiralty Hawker Centre. If this hawker centre alone is not enough to convince you to make a trip to the North, check out our guide to Yishun Park Hawker Centre as well! For more food at Admiralty, this guide to Admiralty’s hawker food gems can help.