I can be quite a health nut at times, from meal-prepping to working out almost every day. So I was naturally excited when I heard about New Shop Spinach Soup. Besides its catchy and quirky name, this hawker stall at Balestier emphasises healthy eating as evident by the absence of oil in their cooking.

This family-run stall started from its neighbouring unit—Macpherson Barbecue Seafood—that was established by Mr Tang. With business doing well at this unit, he decided to use his younger brother’s spinach soup recipe to set up a new healthy concept, resulting in New Shop Spinach Soup. 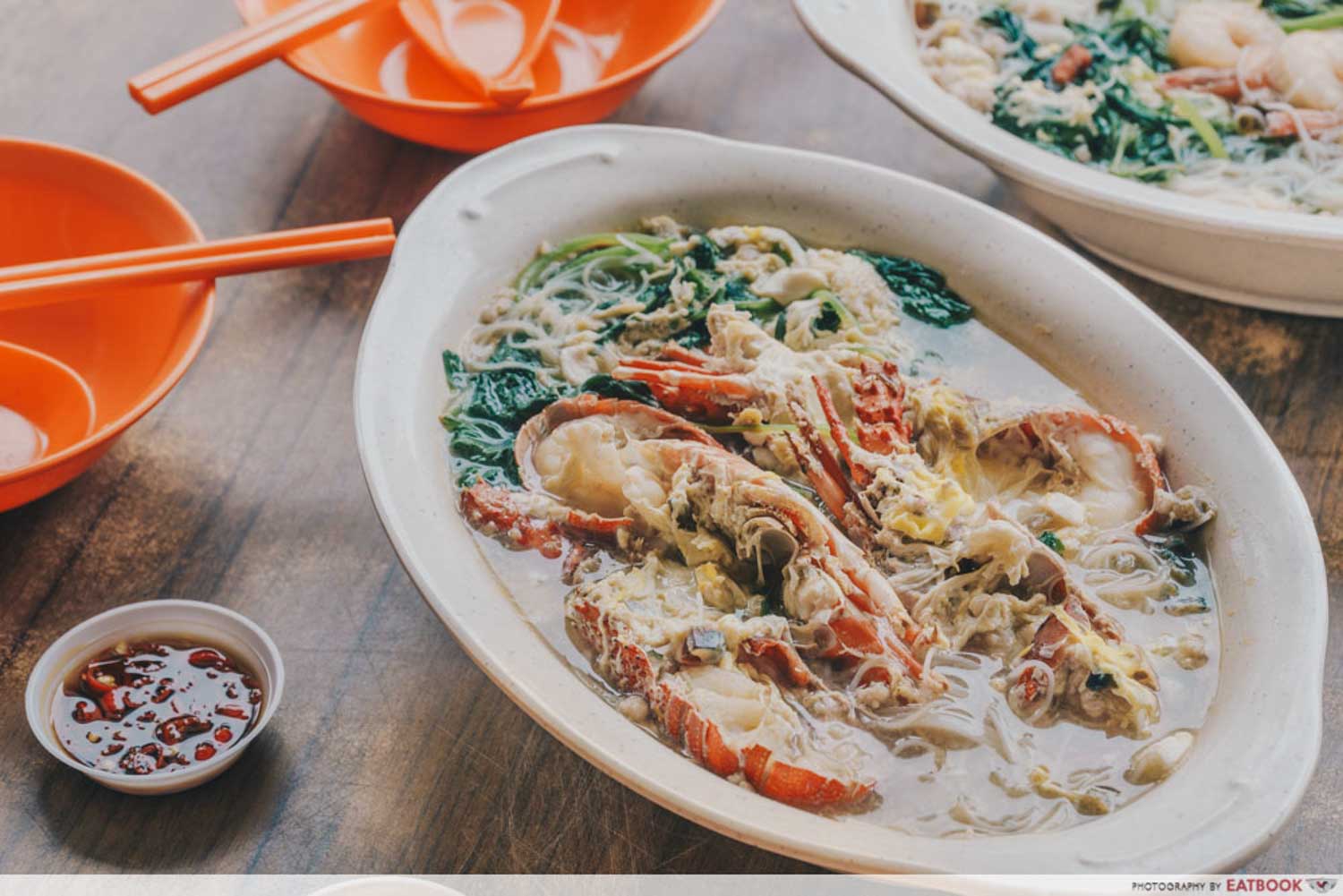 Instead of serving the usual spinach soup, this family-run stall jazzes it up with some seafood. One of which is Spinach Lobster & Mixed Egg Soup that goes at $13.80 for one lobster or $18.80 for two lobsters. As paying less than $20 for lobsters is unheard of, I obviously went for the second option.

Since the dish didn’t come with carbs, I topped up $0.80 for a serving of thin bee hoon. 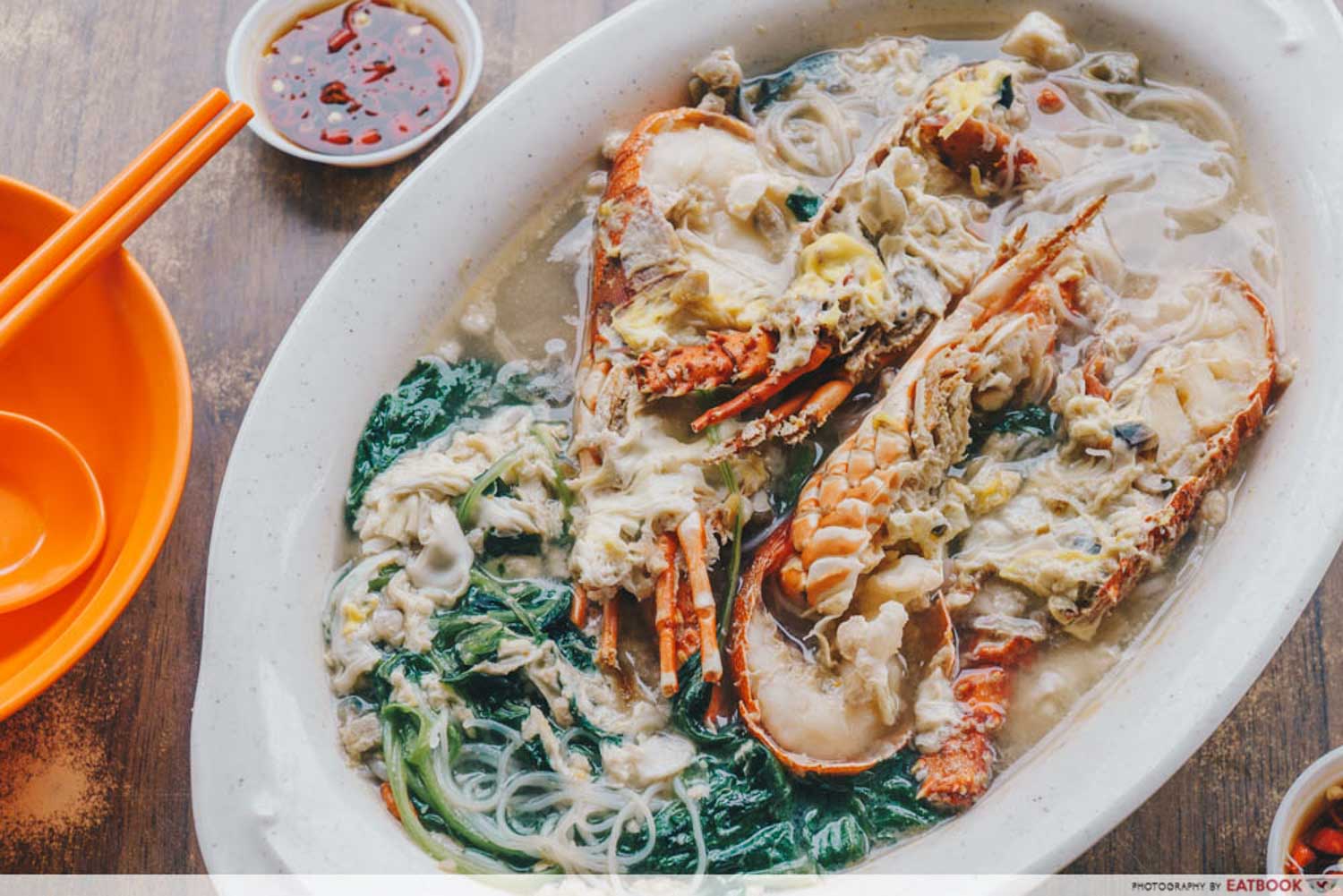 Picking up my order from the counter, I was careful during my return back to my table as the lobsters precariously bobbled in the piping hot spinach soup. 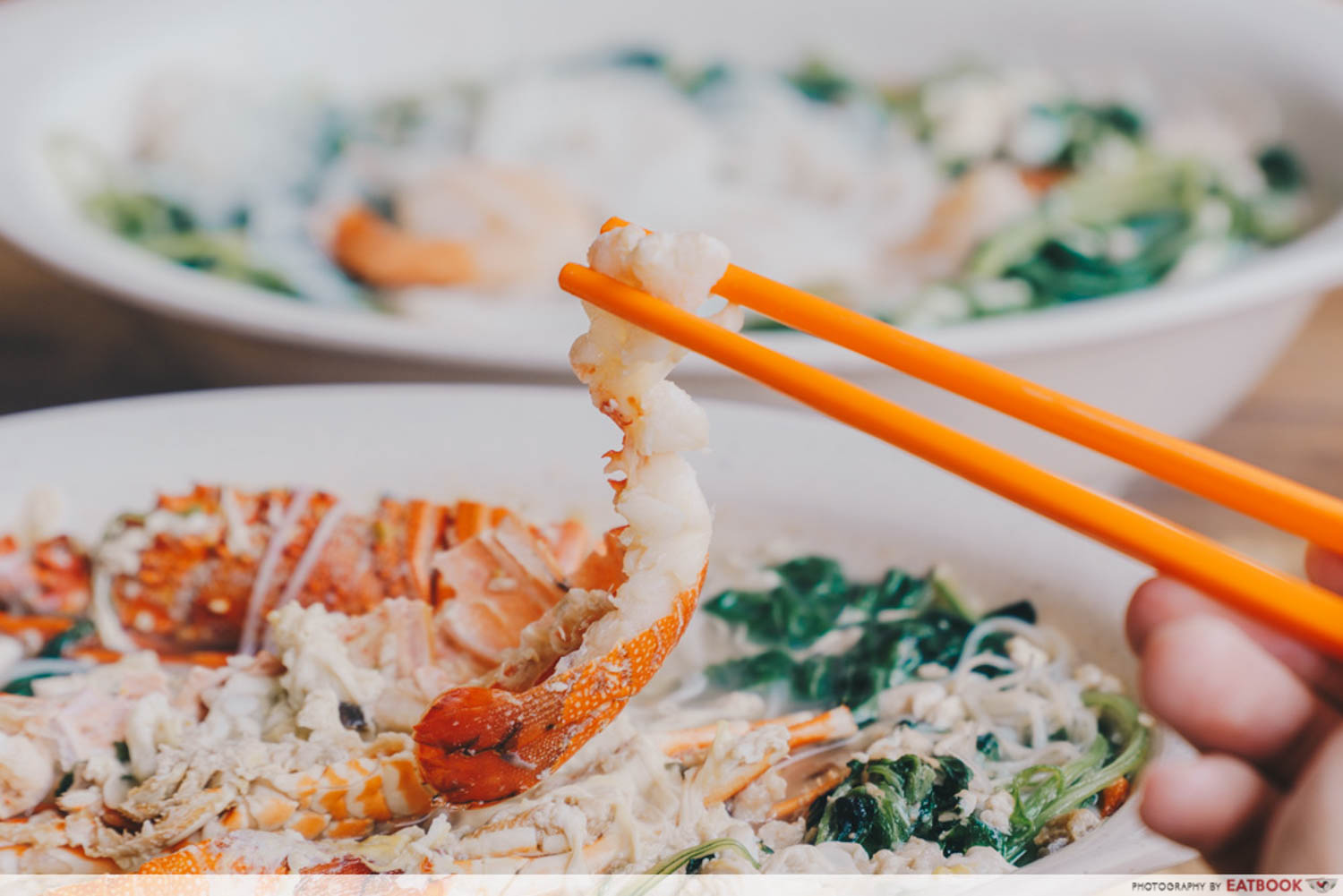 These crustaceans were decently sized and easily peeled off from their shells. The plump meat was fresh-tasting and its natural sweetness deepened the soup with umami. I was surprised at this restaurant-like quality, and later found out that the owner imports fresh lobsters from Australia. 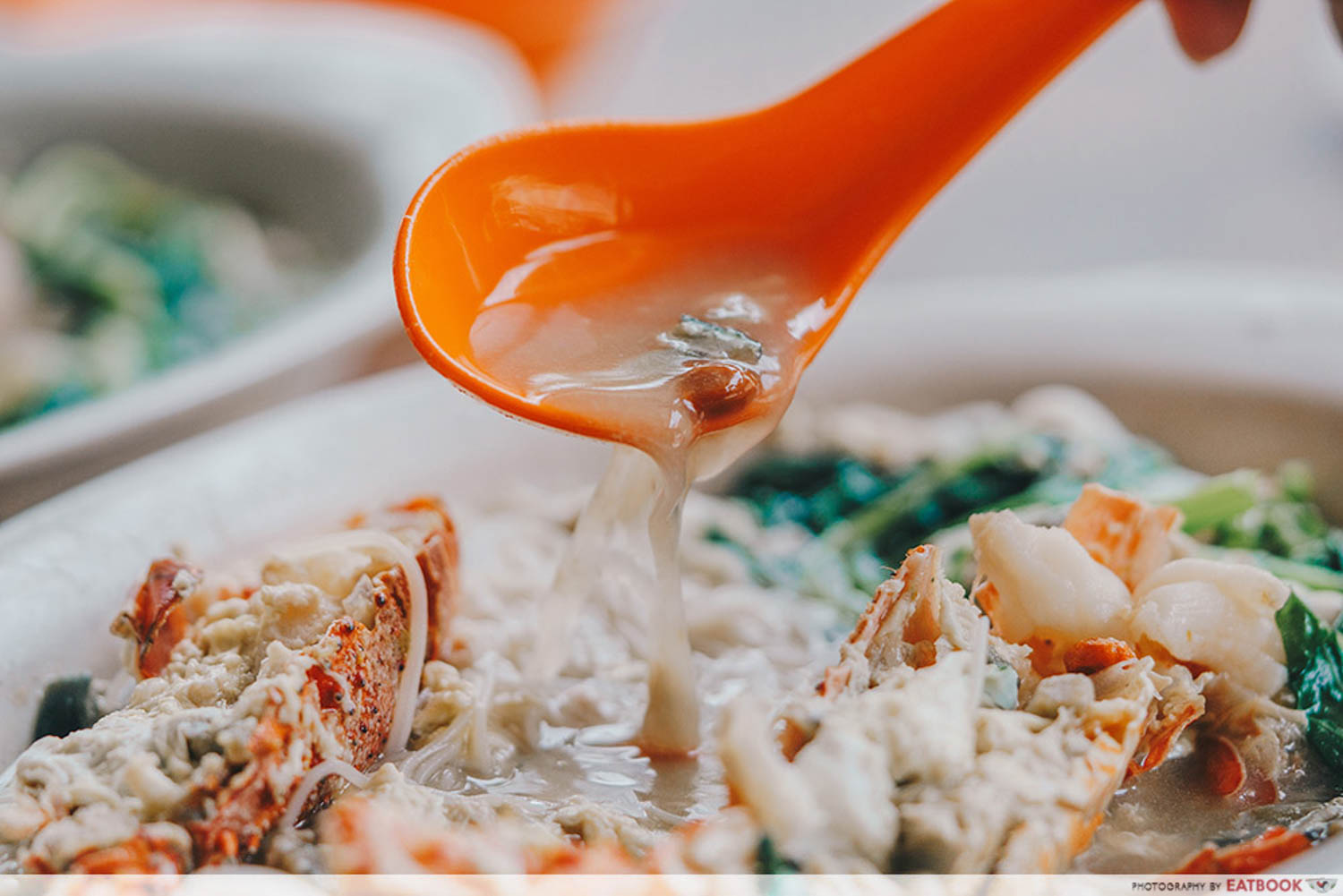 Made using a family recipe, the spinach soup comprises a broth of pork bones and soya beans. This creates a refreshing and flavoursome profile that isn’t too heavy on the palate. The lobsters elevate the light-tasting soup with an umami kick. Plus, the thin bee hoon is quick to soak up these robust flavours. 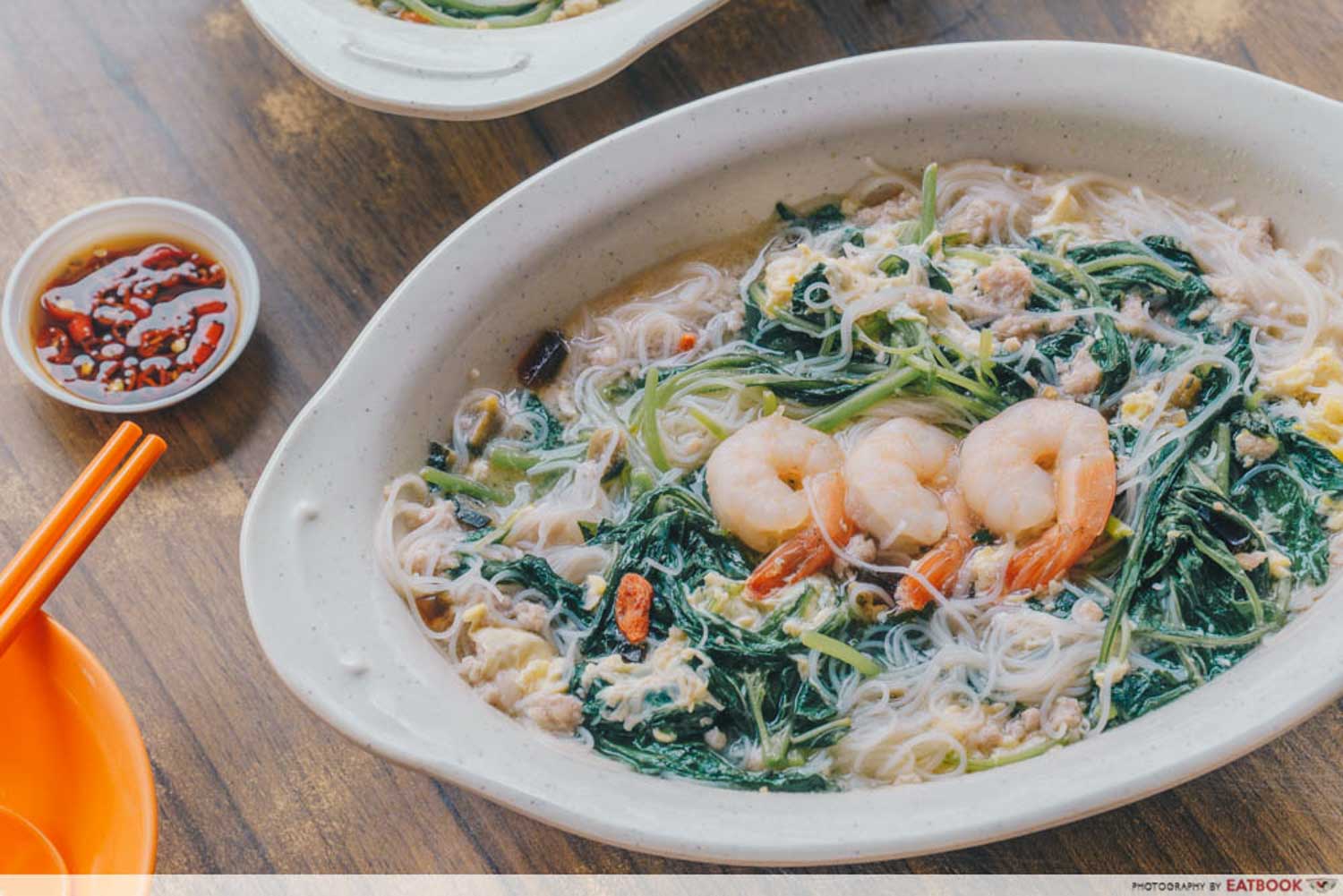 I ordered their Spinach Prawn Soup ($4) with an additional order of thin bee hoon ($0.80) to taste their signature soup in its full glory. 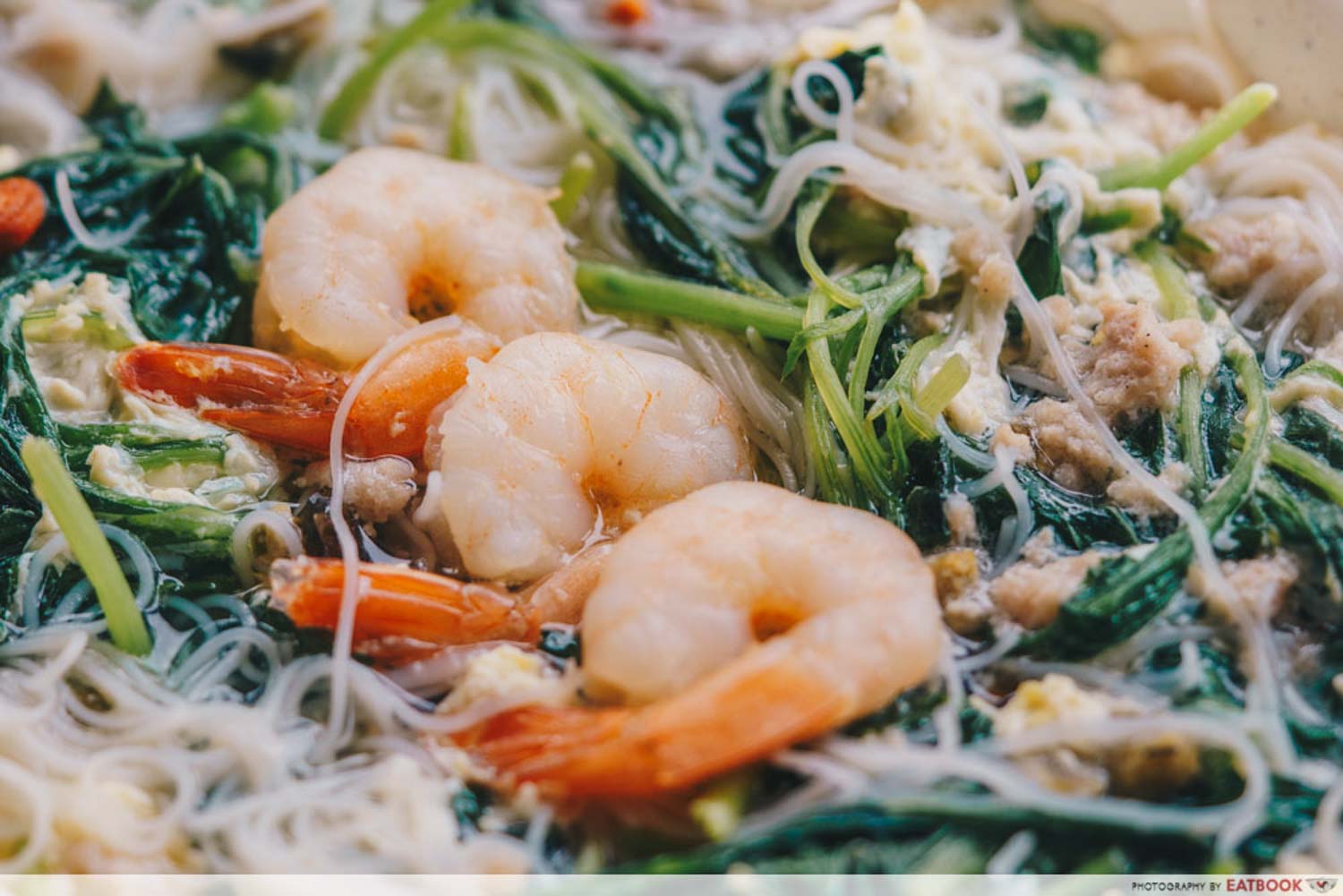 Unlike the lobster soup that was more eye-catching, this dish fell a little short with three prawns floating in a sea of spinach. 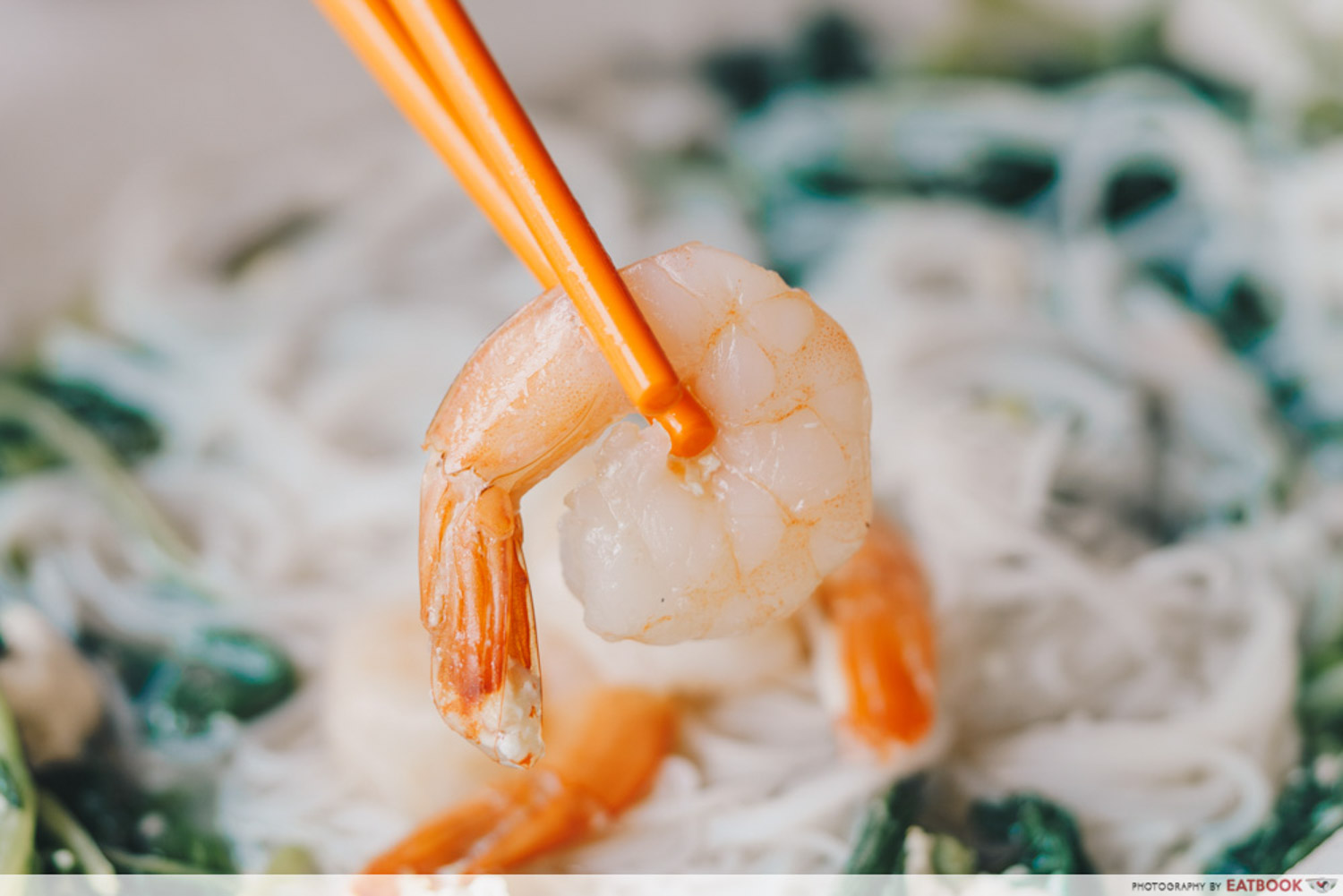 Despite the limited quantity of prawns, their crunchy bite and slight sweetness made up for it. I do wish they were a little more generous with the seafood, but the portion of noodles and vegetables were quite a bargain. 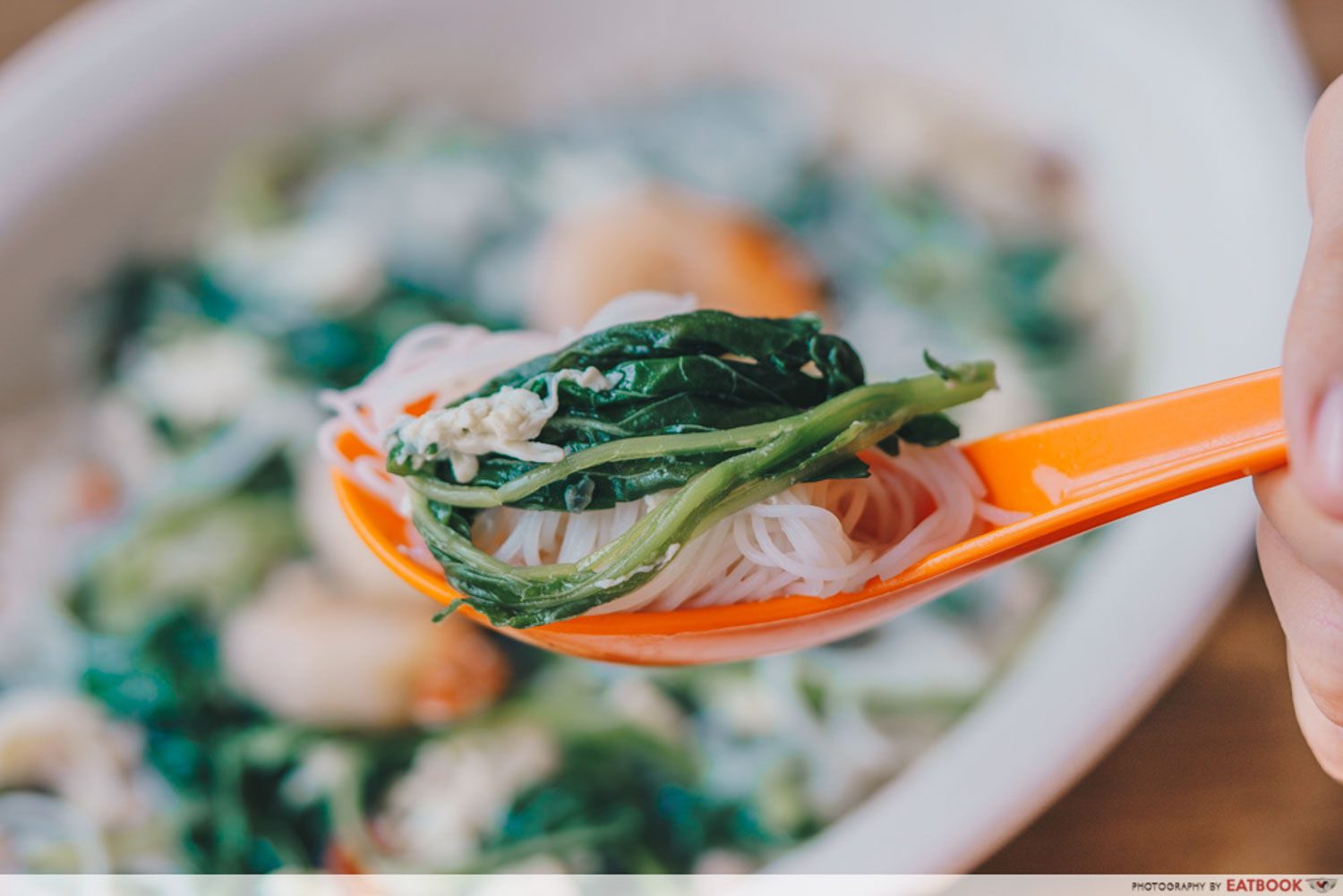 The addition of eggs, century eggs, and red dates gave more dimension to the soup’s flavour profile with some sweetness and creaminess. Opening its doors only a few months ago, New Shop Spinach Soup is the latest addition to Balestier Food Centre. Retaining its original structure, this food centre has a rich and colourful history, starting out as a residential market and even became a food distribution point during the Japanese Occupation.

This hawker centre has obviously been upgraded since those times, with much-needed ceiling fans to keep the food centre cool.

Though Balestier Food Centre is open 24/7, New Shop Spinach Soup only operates from 11am to 10pm daily. It’s quite a pity that it’s not located near an MRT Station, as this healthy hawker stall could be my daily go-to.

With such fresh and nourishing dishes, New Shop Spinach Soup proves that eating healthy doesn’t have to be boring.

If you’re looking for more soupy noodles, check out our review of 133 Mien Fen Guo!

Photos taken by Clement Sim.
This is an independent review by Eatbook.sg. 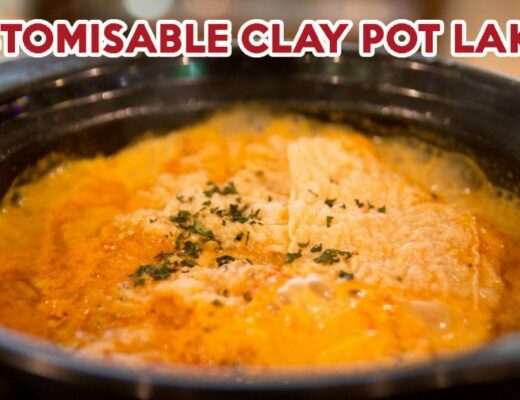 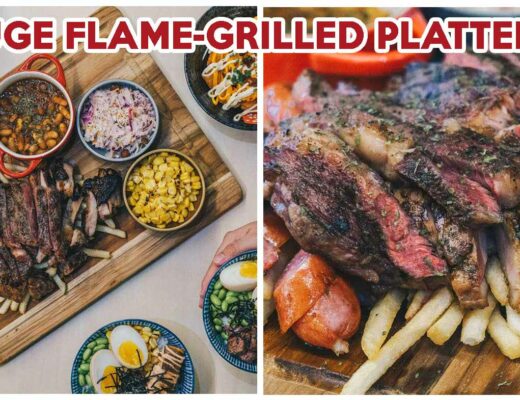