Pancake & Waffle Place is a Muslim-owned cafe in Bugis If you’ve ever heard of the saying that waffles are just pancakes with abs, I’d beg to differ as they taste quite different. And yet, I always find myself torn between the two options as they are both so good. My visit to the Pancake & Waffle Place at Kandahar Street has resolved that dilemma, as they serve both pancakes and waffles in a variety of flavours.

Pancake & Waffle Place is another one of Royz et Vous’ ventures, a popular Muslim-owned cafe and restaurant at Kampong Glam that opened in 2014. I’m not usually a fan of savoury pancakes, but the popular Tiger Prawn ($20.90++) pancakes looked so appetising on the menu that I knew I had to get it.

The aroma of truffle wafted through the air as the dish was being brought out to us, whetting our appetite. I liked that the hash browns had flecks of what seemed to be black truffle, adding a premium touch to the dish. 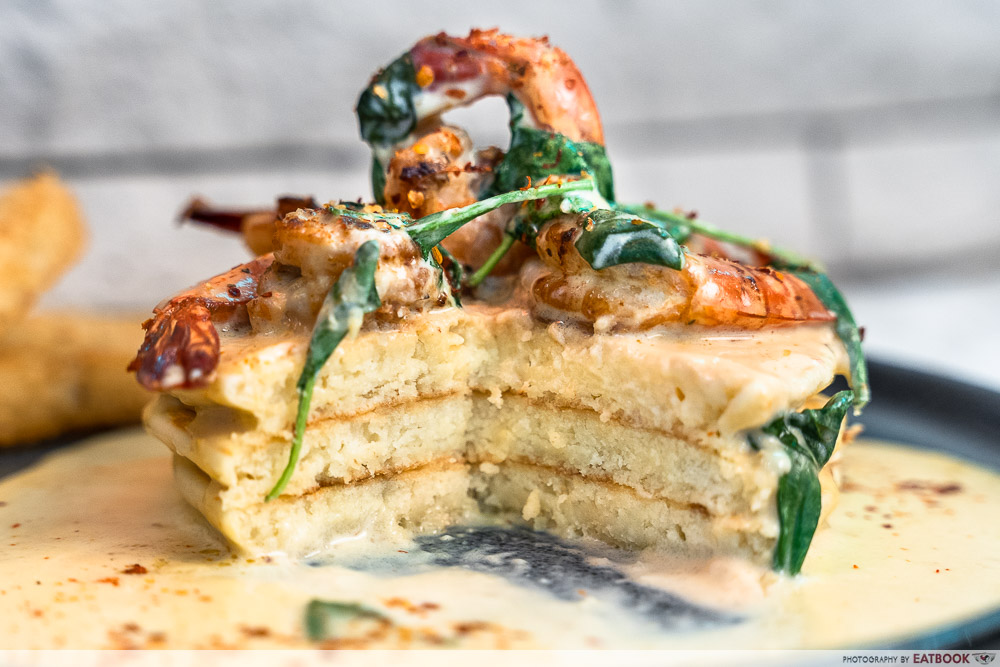 What impressed me the most was the creamy sauce on the pancakes, which I initially thought was made out of salted egg yolk. Instead, it boasted a spicy, smokey, and rich seafood flavour, which perfectly complemented the sweet pancakes. 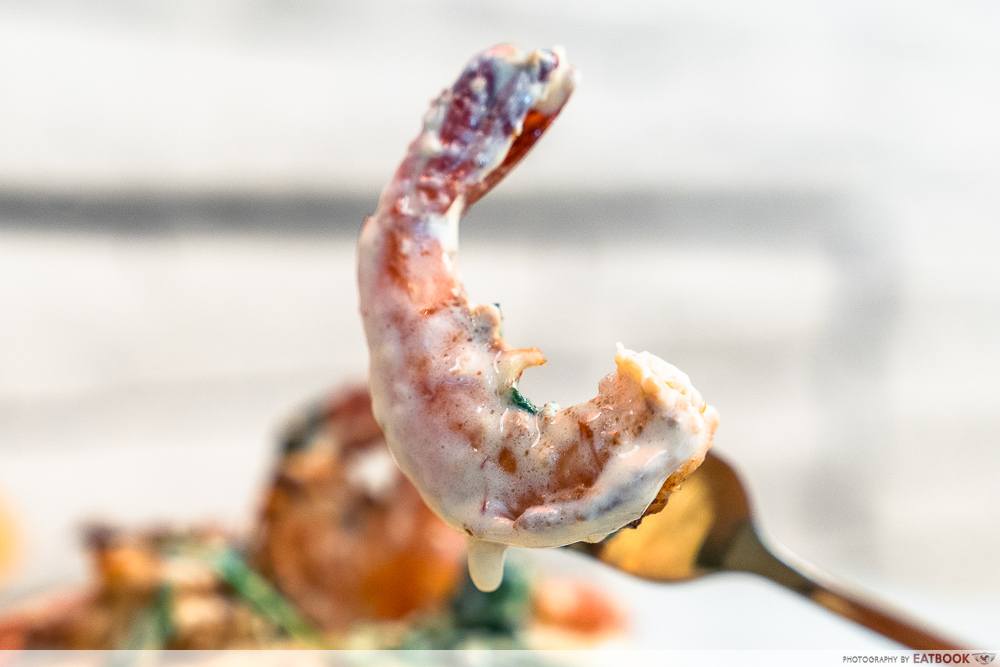 Although I would have preferred for the pancakes to be fluffier and less dense, the well-seasoned tiger prawns made up for it, boasting a firm texture and garlicky aftertaste. Since our previous dish consisted of pancakes, we got the Ham & Cheese Waffle ($22.90++) next—a must-try dish according to the waiter who served us. The dish featured slices of savoury ham smothered in house-made tomato sauce, all sandwiched between buttery waffles. 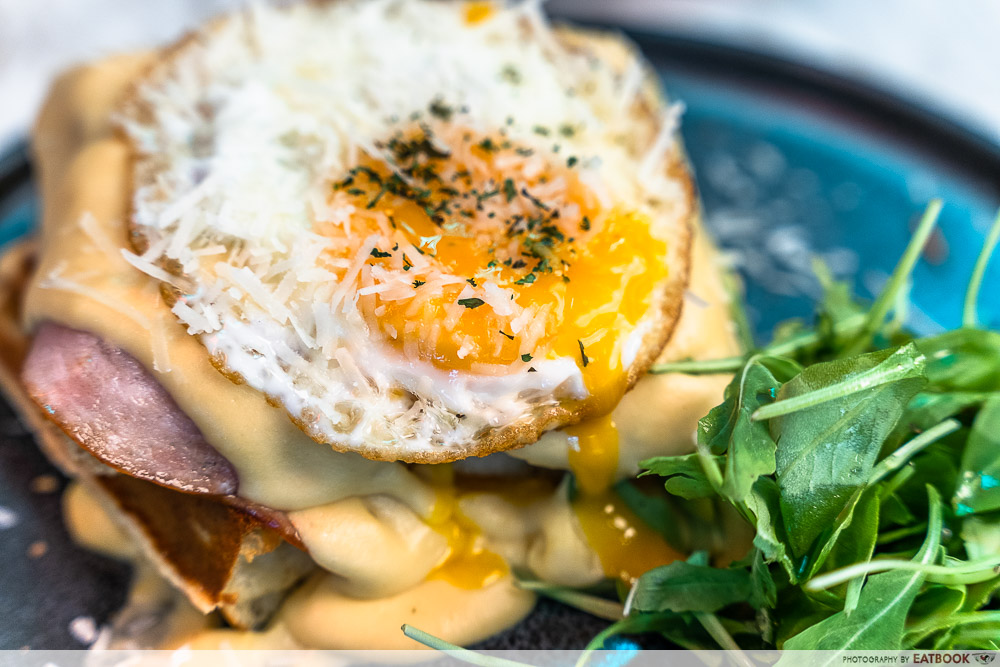 Unfortunately, the combination of thick, savoury hollandaise sauce with creamy egg yolk made the dish a little too rich for our liking. On top of that, it was finished with three types of grated cheese, which intensified the heavy flavours of the dish.

The side of rocket leaves was a nice touch though, as its bitter and peppery notes added a refreshing kick to offset the richness of all the other components. 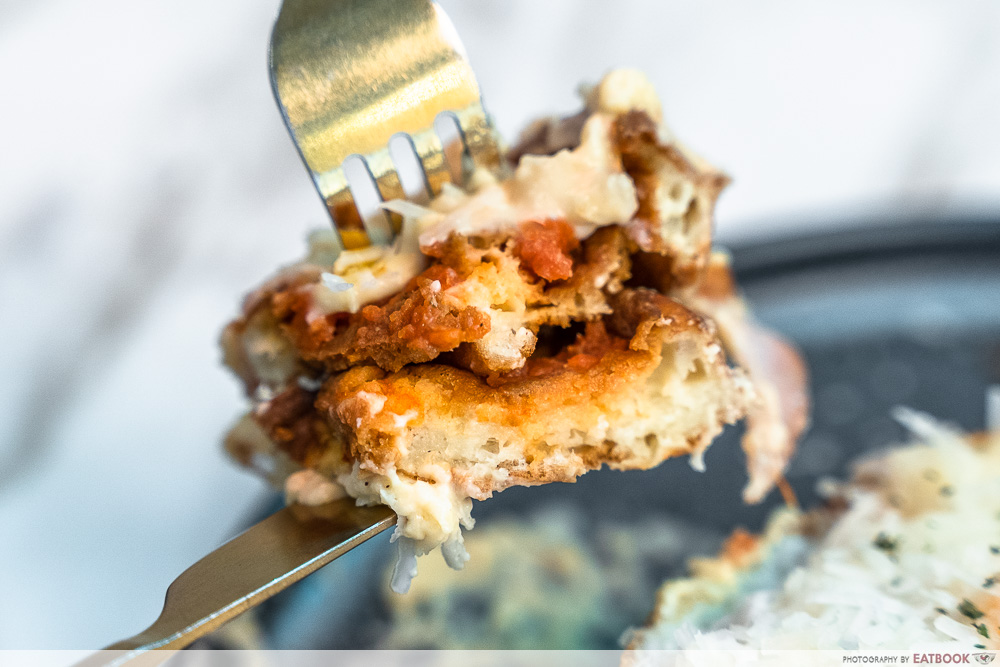 The waffles were also on the denser side, which made it quite difficult to finish. 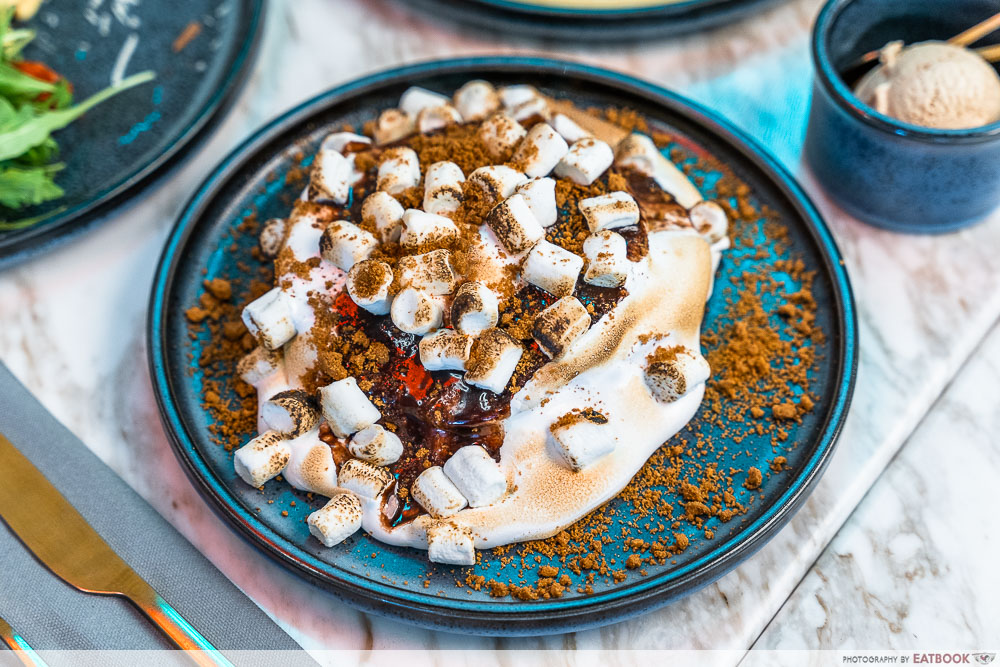 Although we were stuffed, we couldn’t end our meal without dessert. The Smores Pancakes ($17.90++) were the epitome of a beautiful mess—gooey marshmallows, crushed Lotus Biscoff cookies, and chocolate sauce draped over a stack of pancakes. 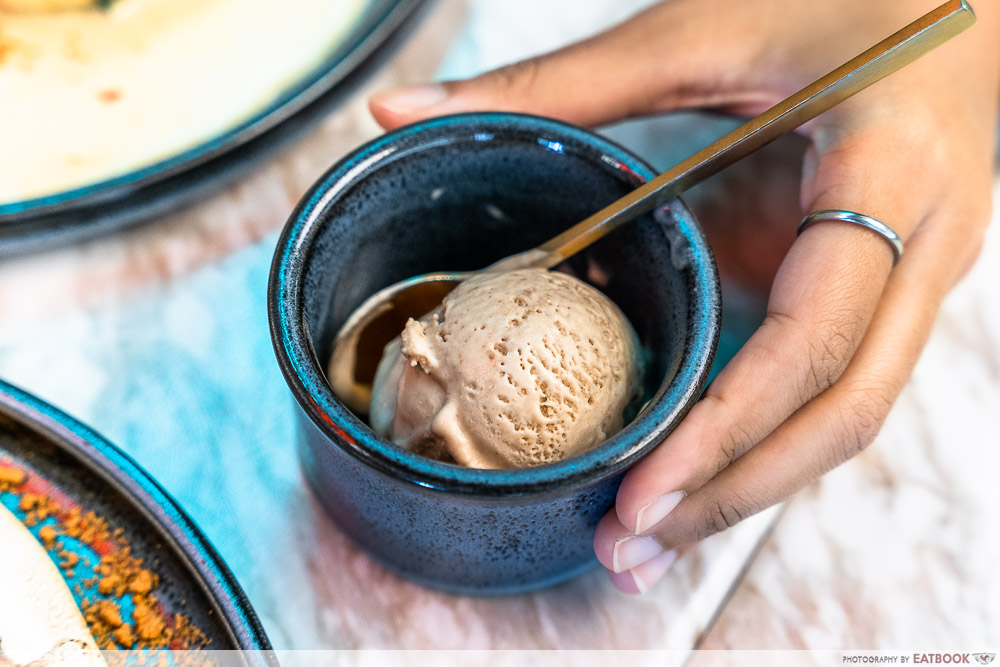 We also got a single scoop of Speculoos ice cream ($5.90++) to enjoy with our pancakes. 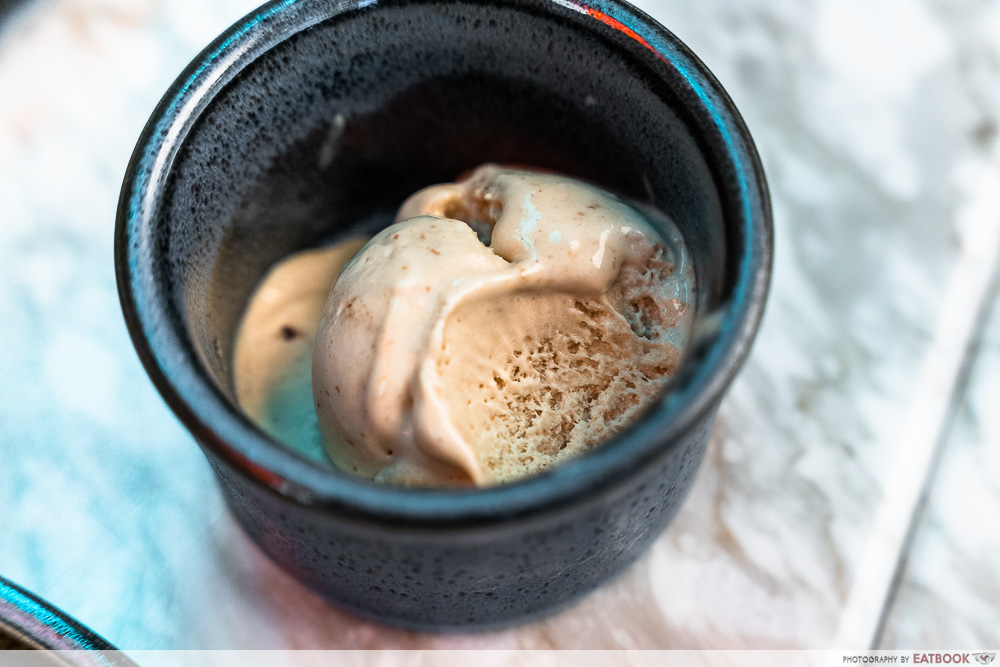 On its own, the creaminess and caramel-like sweetness was definitely more pronounced, but when paired with the pancakes, it didn’t do much to elevate the flavours of the dessert. 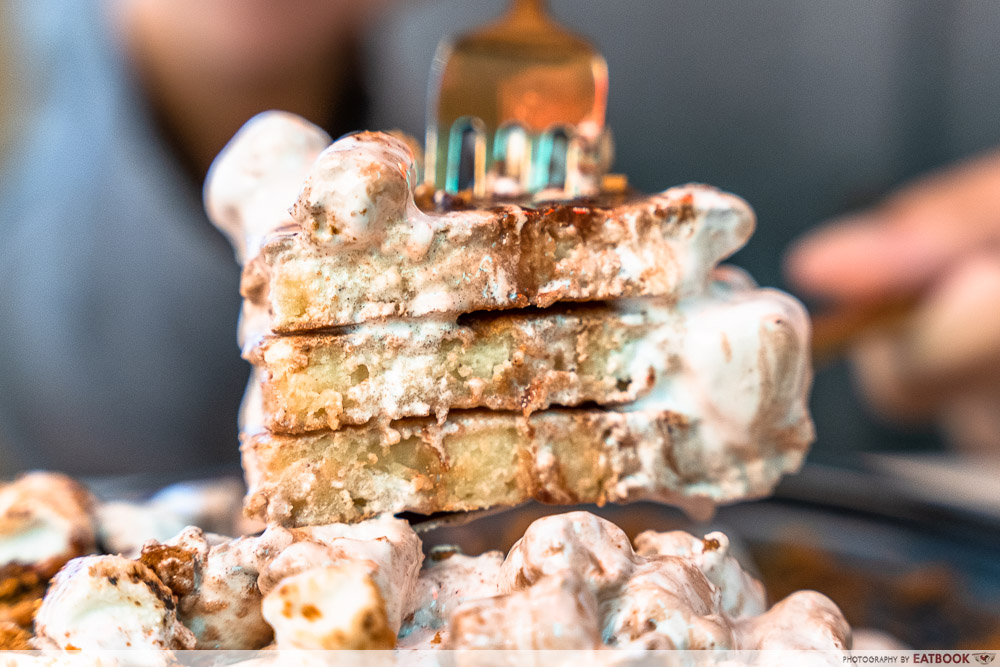 We had expected the pancakes to be cloyingly sweet, but were pleasantly surprised to find that it was more subdued. The hints of what seemed to be cinnamon added depth to the toasted marshmallows too.

My only gripe with the dessert was the pancakes, which were again on the denser side. 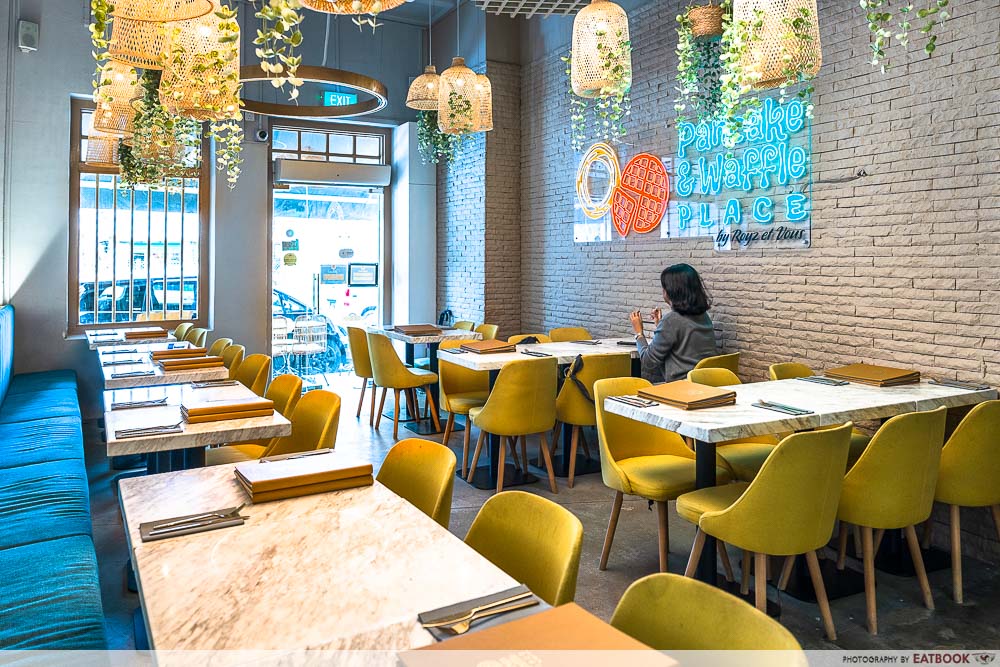 The cafe sits along a stretch of shophouses on Kandahar Street along with several other Muslim-owned eateries.

The warm and cosy interior sported clean, white brick walls and fancy ceiling lights that impressed us and made our dining experience a comfortable one. There were also waffle-shaped decor hung on the ceiling, which added a fun touch to the overall laid-back vibe of the place. 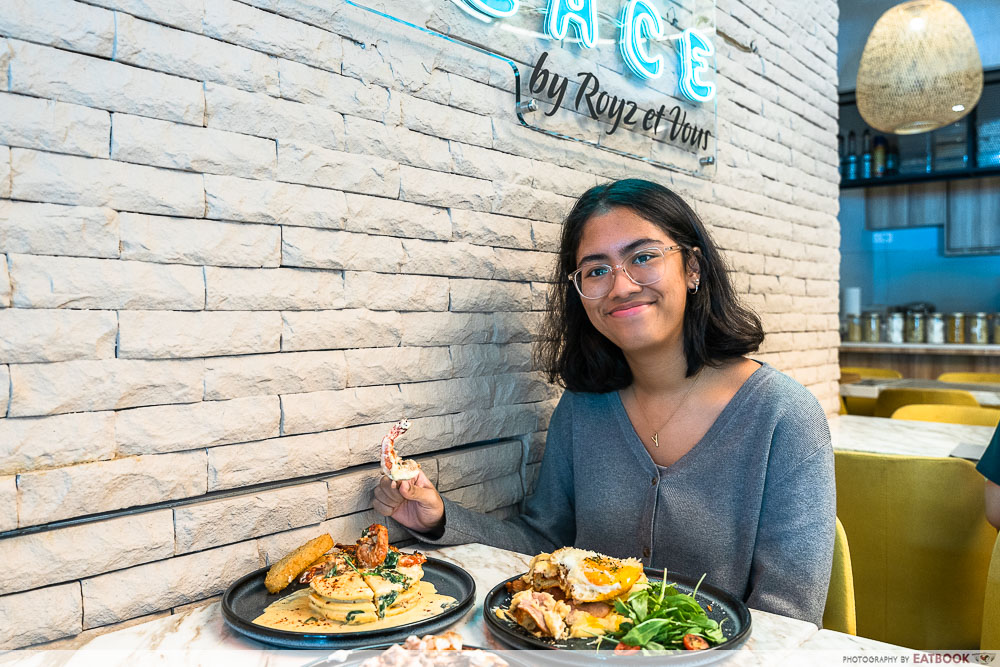 Despite the array of pancake and waffle flavours available, we felt that we would have enjoyed the food more if the pancakes and waffles were more airy and fluffy. I wouldn’t mind, however, coming back occasionally, as the chill vibe and atmosphere made up for the areas in which the food was lacking.

While you’re around Bugis, you can check out The Pink House for more halal-friendly eats such as Philly cheesesteaks, acai bowls, and more. Alternatively, read our Pergh!Chicks review for volcano curry rice and spicy chicken wings!

Photos taken by Yi En Chew
This was an independent review by Eatbook.sg

Pros:
– Tiger prawns were succulent and garlicky
– Smores pancakes were not overly sweet
– Ambience was nice 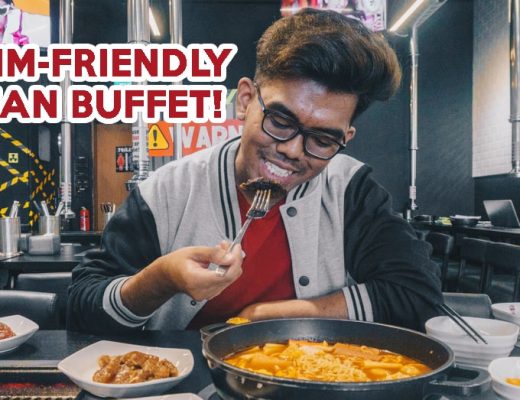 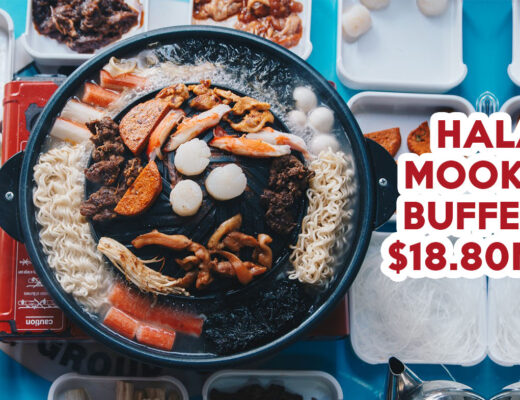