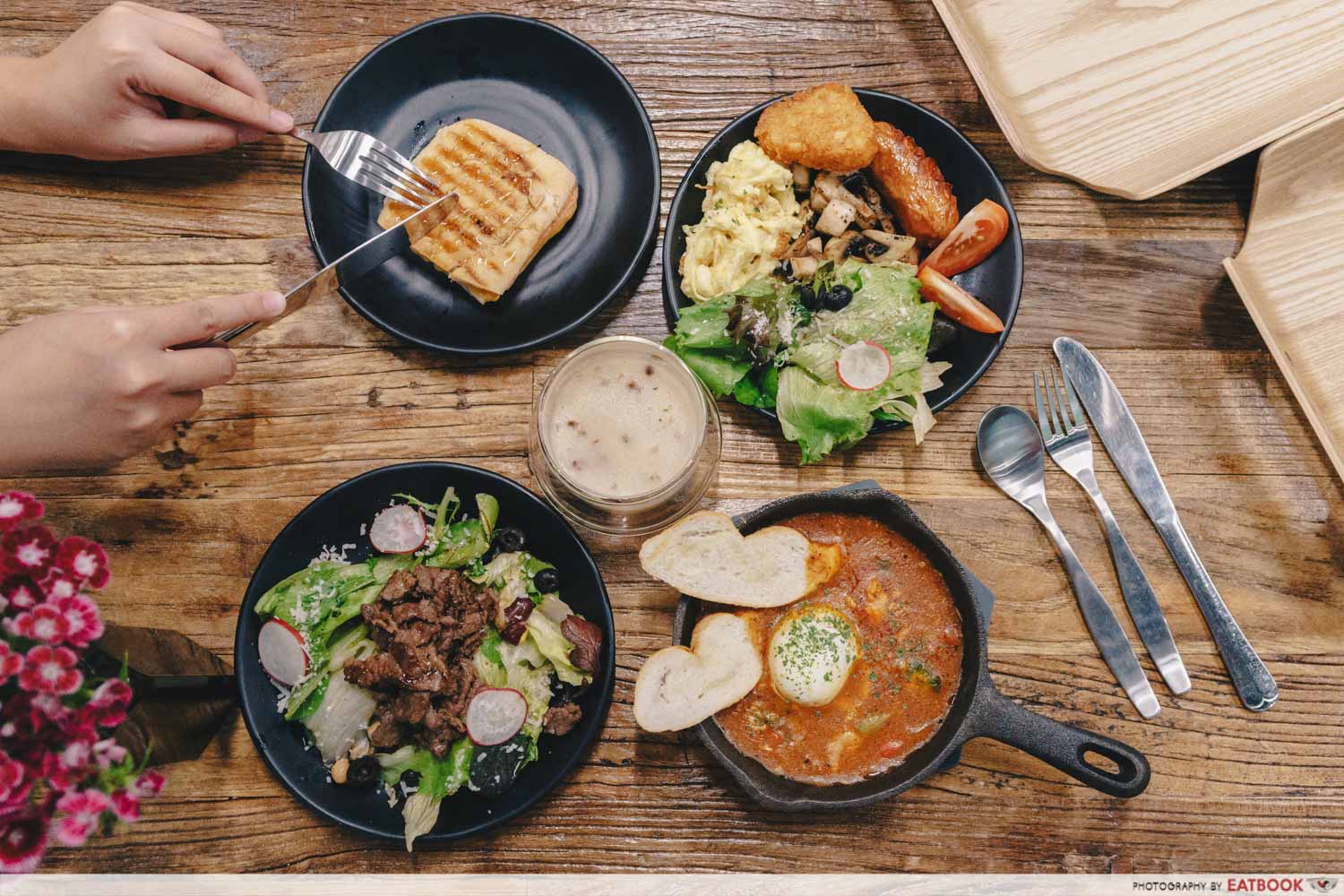 I’m a sucker for all things pretty and am always on the hunt for new beautiful cafes to head to. Like the luscious green plants around the cafe, Walking On Sunshine has quietly sprouted on the third level of Orchard Central. Not only did they draw me in with their aesthetic vibes, but they also drew me in with their value-for-money brunch buffet.

Food at Walking On Sunshine 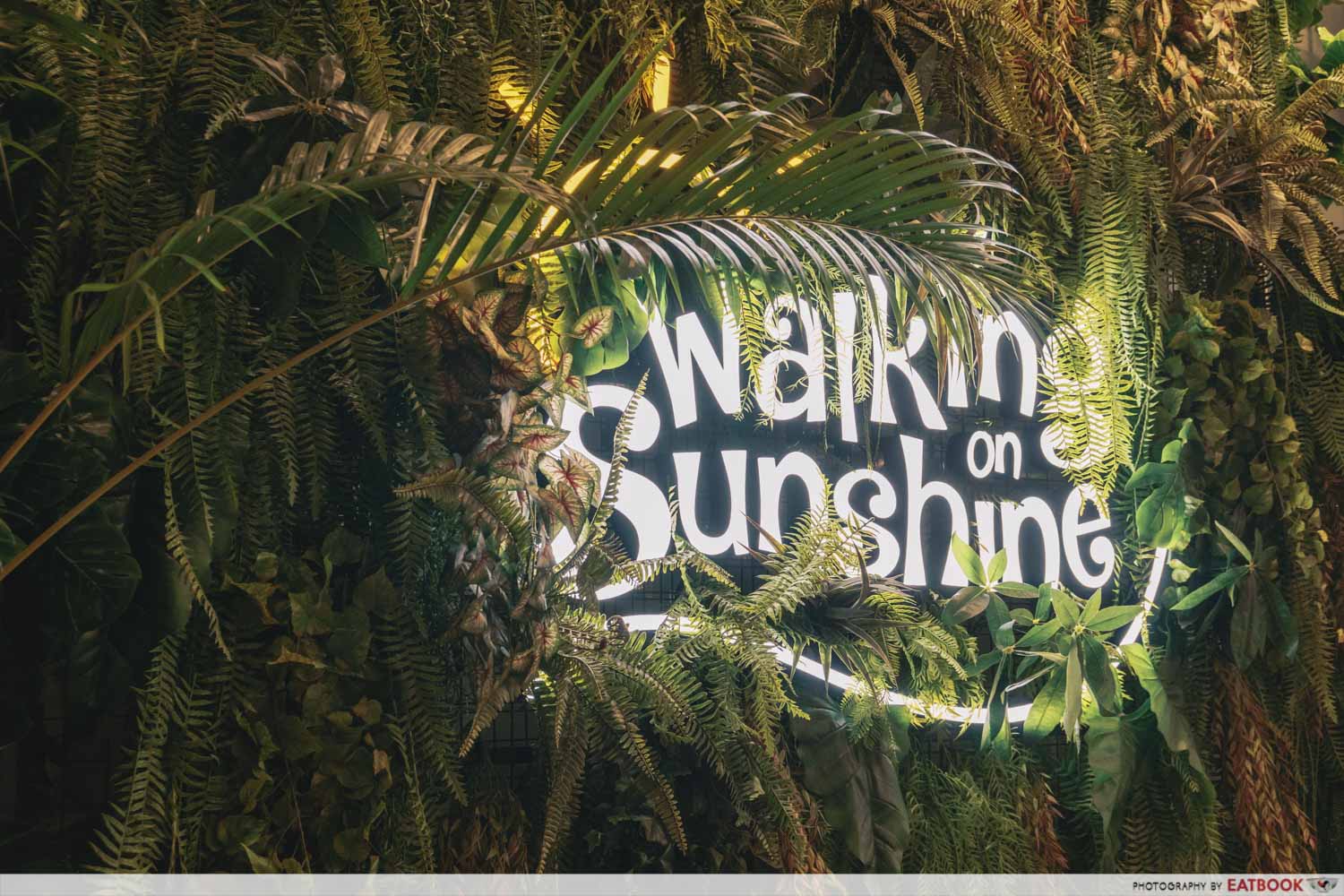 Whether it’s for a special occasion or for your usual chillax brunch sesh, Walking On Sunshine’s $15 breakfast buffet has got you covered. Available daily between 9am to 12pm, get your fill with choices from the brunch, soup, salad, and panini menu at this newly opened Korean beauty salon and cafe multi-concept store. Ordering a full breakfast platter for brunch happens like clockwork for me. The American Breakfast comes with sausage, hash brown, scrambled eggs, salad, and a medley of mushrooms. It doesn’t come with sides such as bacon and guacamole like the full-sized portion at $19, but I’m not complaining. 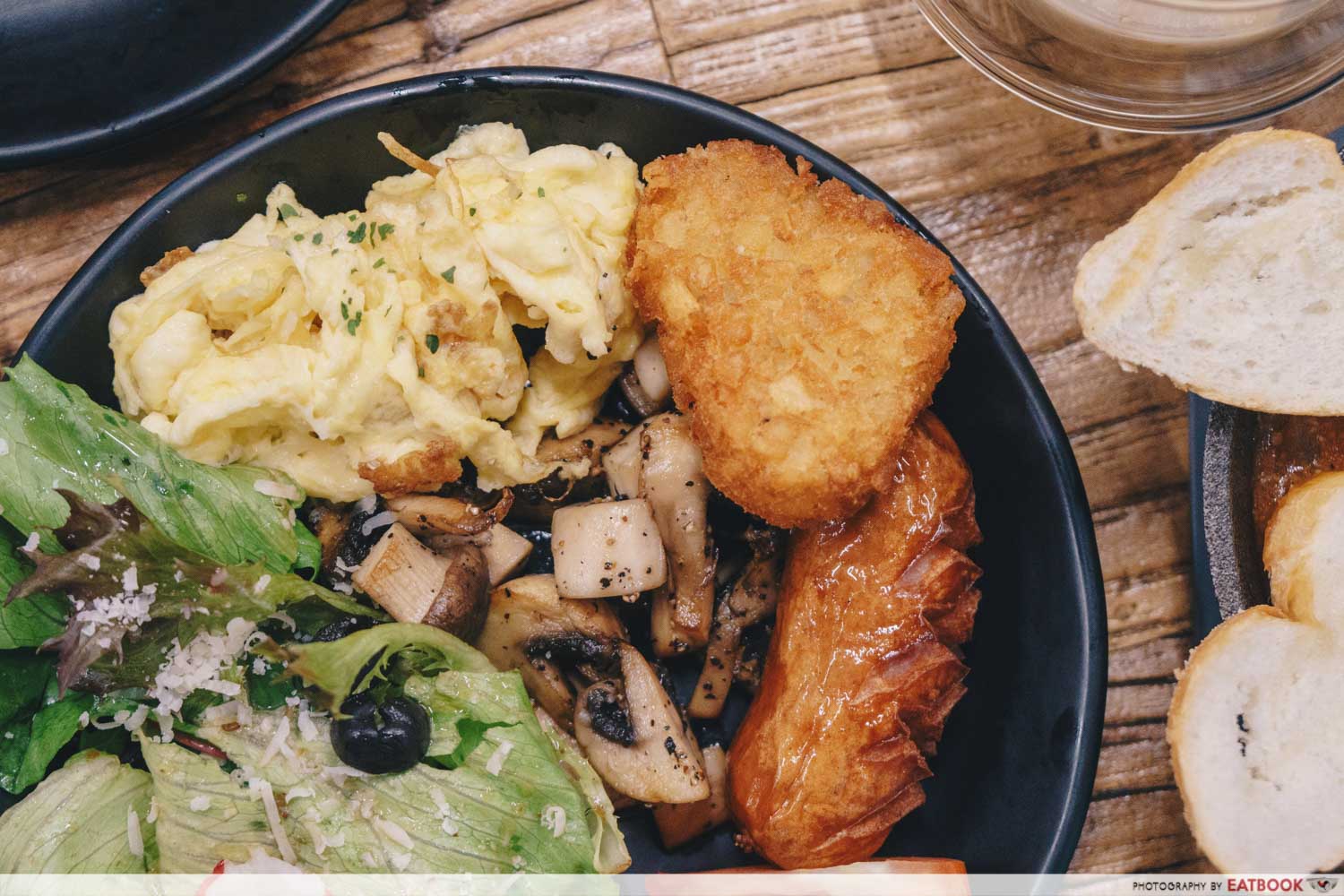 Think of the American Breakfast as your initiation to the buffet. The plate is wholesome and the flavours are easy on the palate. Start off light with the fresh salad then move on to the tasty chicken sausage. The mushrooms though mildly seasoned, were juicy despite us leaving it out for a while to take pictures. 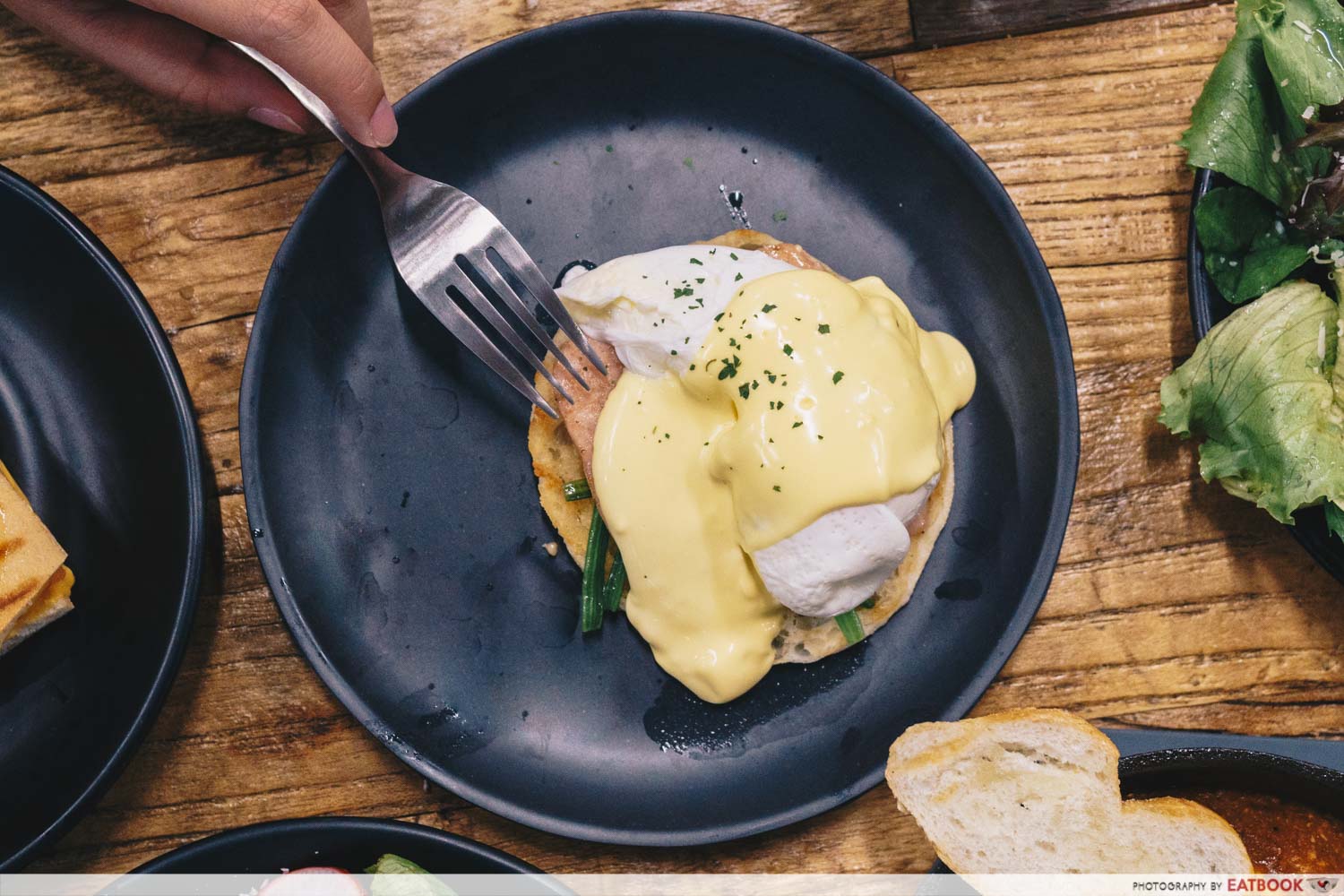 Eggs Benedict is another brunch staple. I was amused when it arrived at the table as it was the first time seeing eggs benedict not served in a pair. English muffins at the bottom are also typically thick, but the ones used here are thinner than usual – more like a pancake.

The egg was beautifully poached and became the subject to our #eggporn boomerangs. The sauteed spinach married well with aromatic garlic bits and lent some earthiness to the dish. My only gripe would be the chicken ham above the spinach. Its consistency was mushy and it tasted very processed. 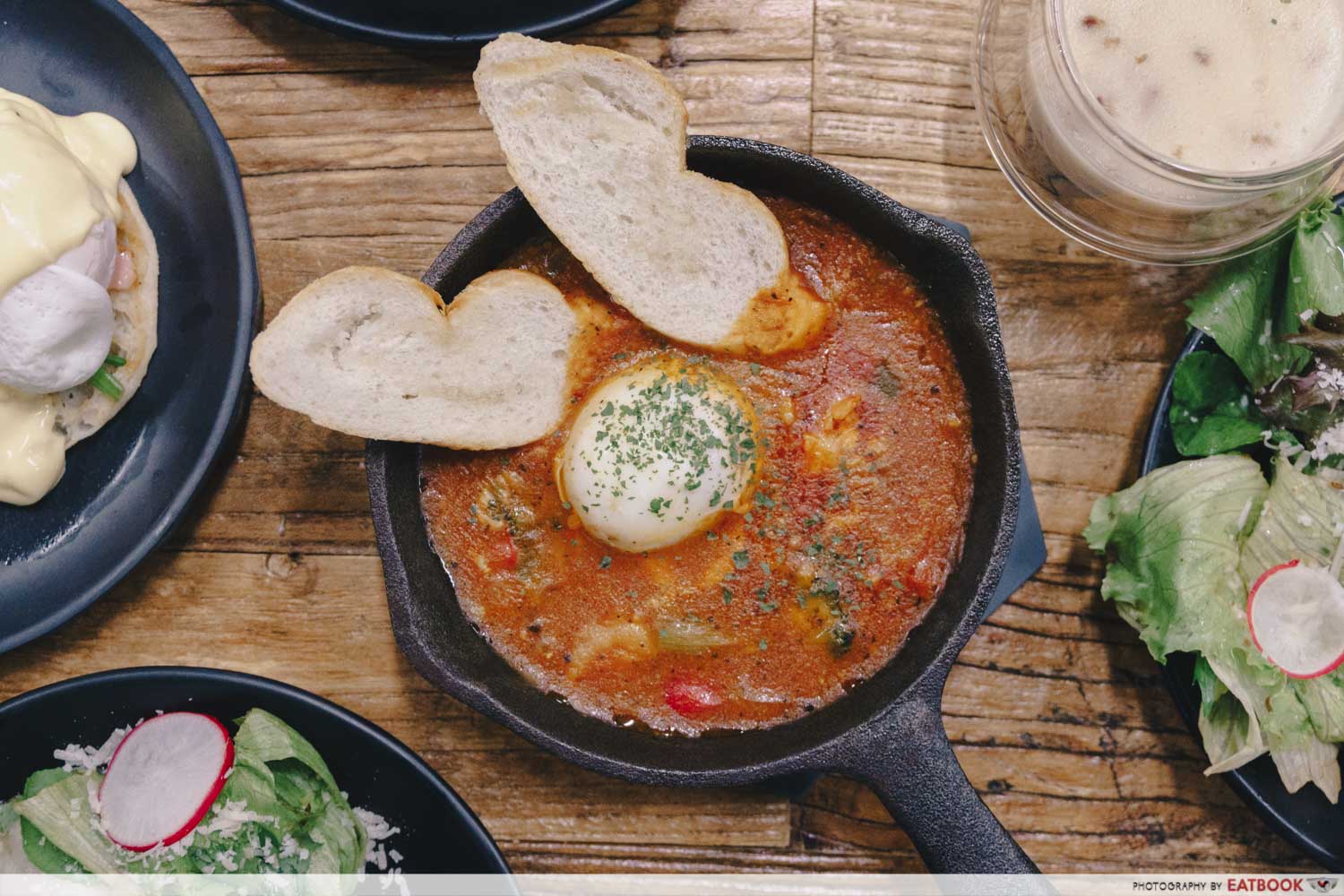 Another item under the brunch menu is Eggs In Hell. It came in a hot cast iron skillet. Just like its name, there was an egg swimming in dark red tomato sauce. There was a myriad of ingredients such as onions, bacon, broccoli, and cheese in the sauce. Thankfully, two slices of baguette were also provided to mop up the sauce. 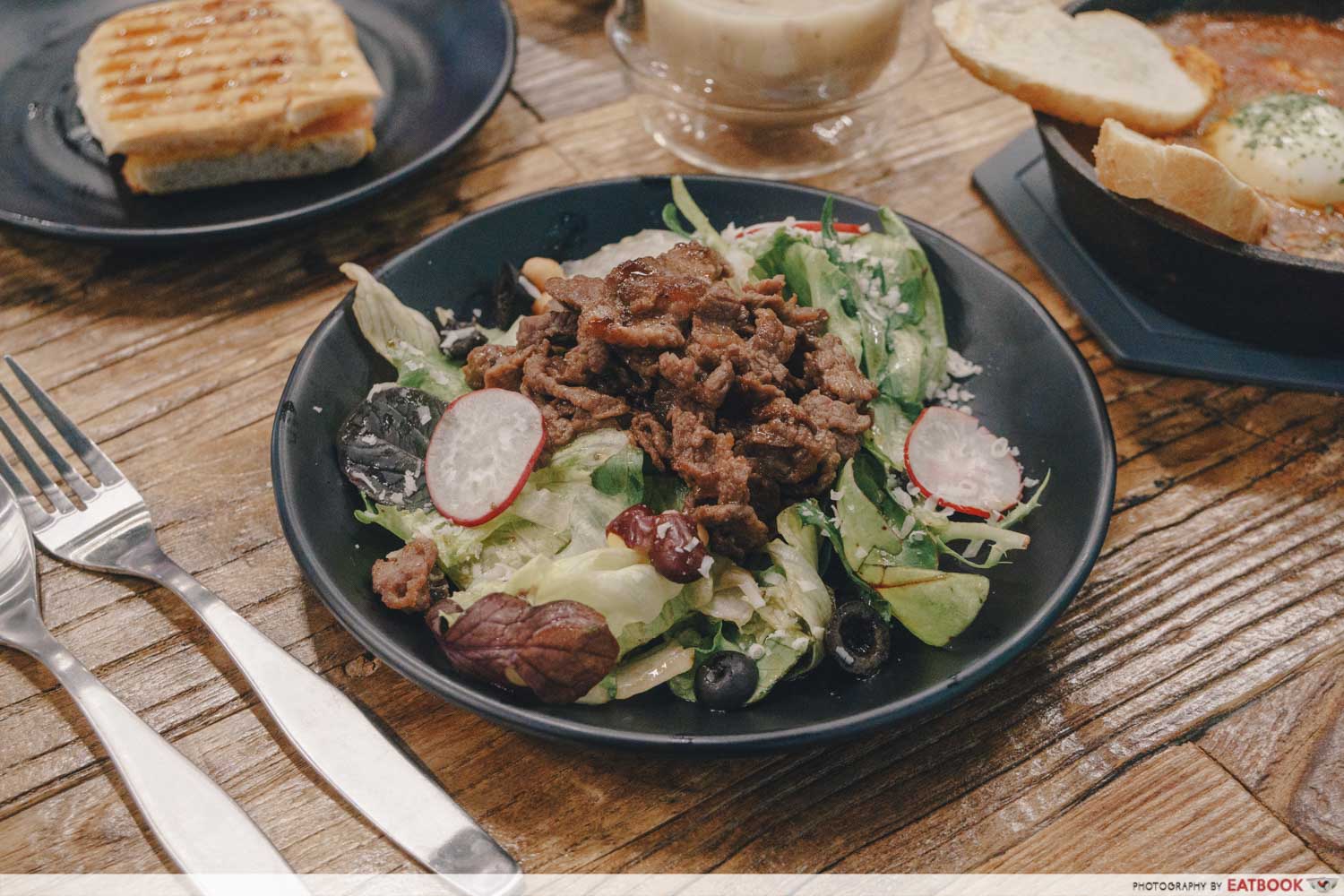 The Bulgogi & Mix Bean Salad is a must-order for those who wish to pile on the veggies before anything else. It features a serving of beef bulgogi atop a bed of lettuce, radish slices, olives, and a variety of beans. The beef slices were tender and robustly-flavoured. I could easily finish a bowl of rice with it. 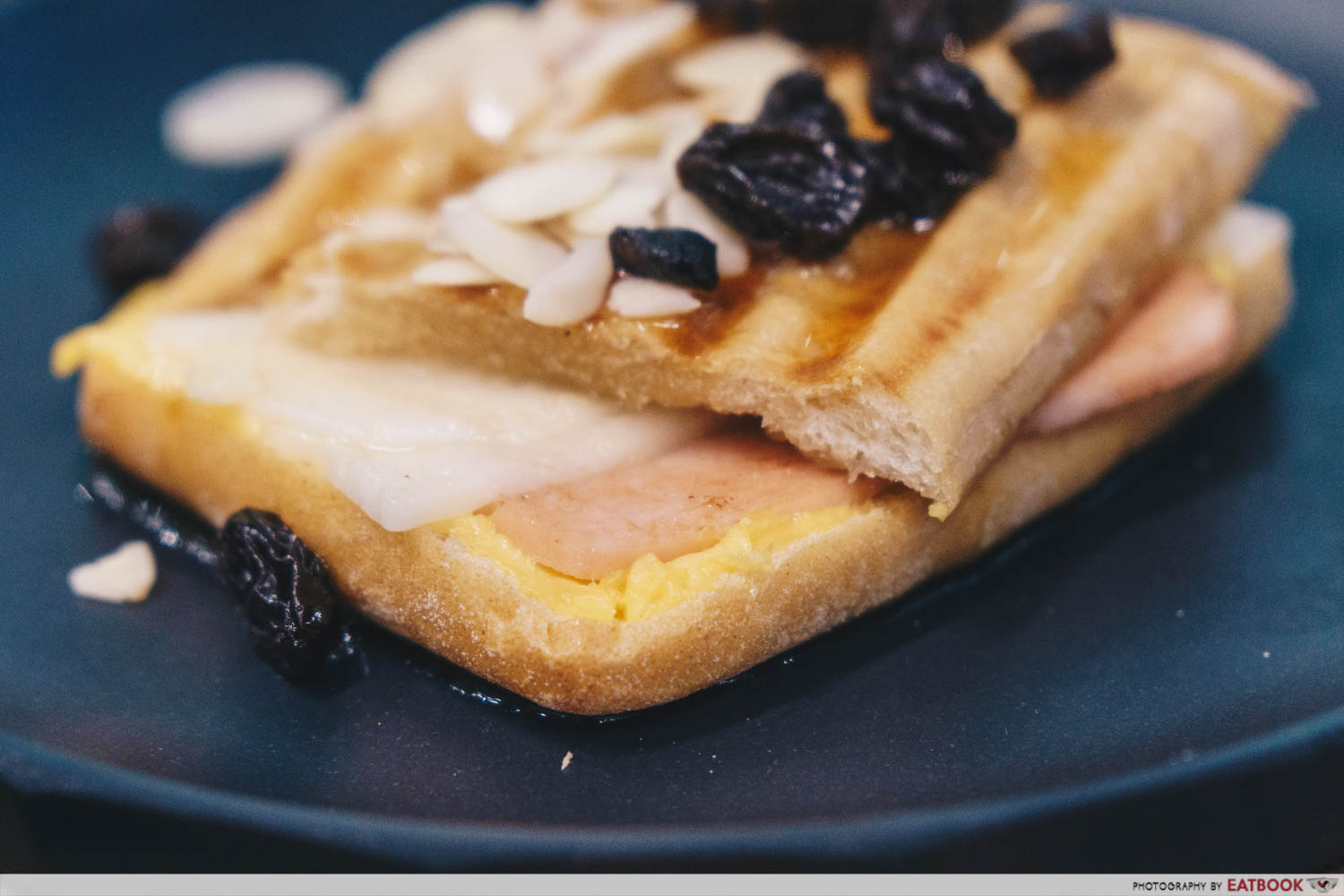 Left for the last because of how plain and boring it looked, the Honey Ham Cheese Panini took us by surprise. It was made with Korea’s most emblematic dessert ingredients – honey and toast. This was a savoury and sweet combination with a difference. Toasted to a delicious crunch, the ciabatta bread is stuffed with salty chicken ham, camembert mozzarella, and cheddar cheese. It was the addition of honey which turned an otherwise ordinary dish into something exceptional. The Soup Of The Day was Beef Soup. I was not a fan. Served in a small glass cup, it was thick and almost floury, almost like a roux instead of a soup. I suggest giving it a miss and save your stomach space for more brunch goodies.

Ambience at Walking On Sunshine 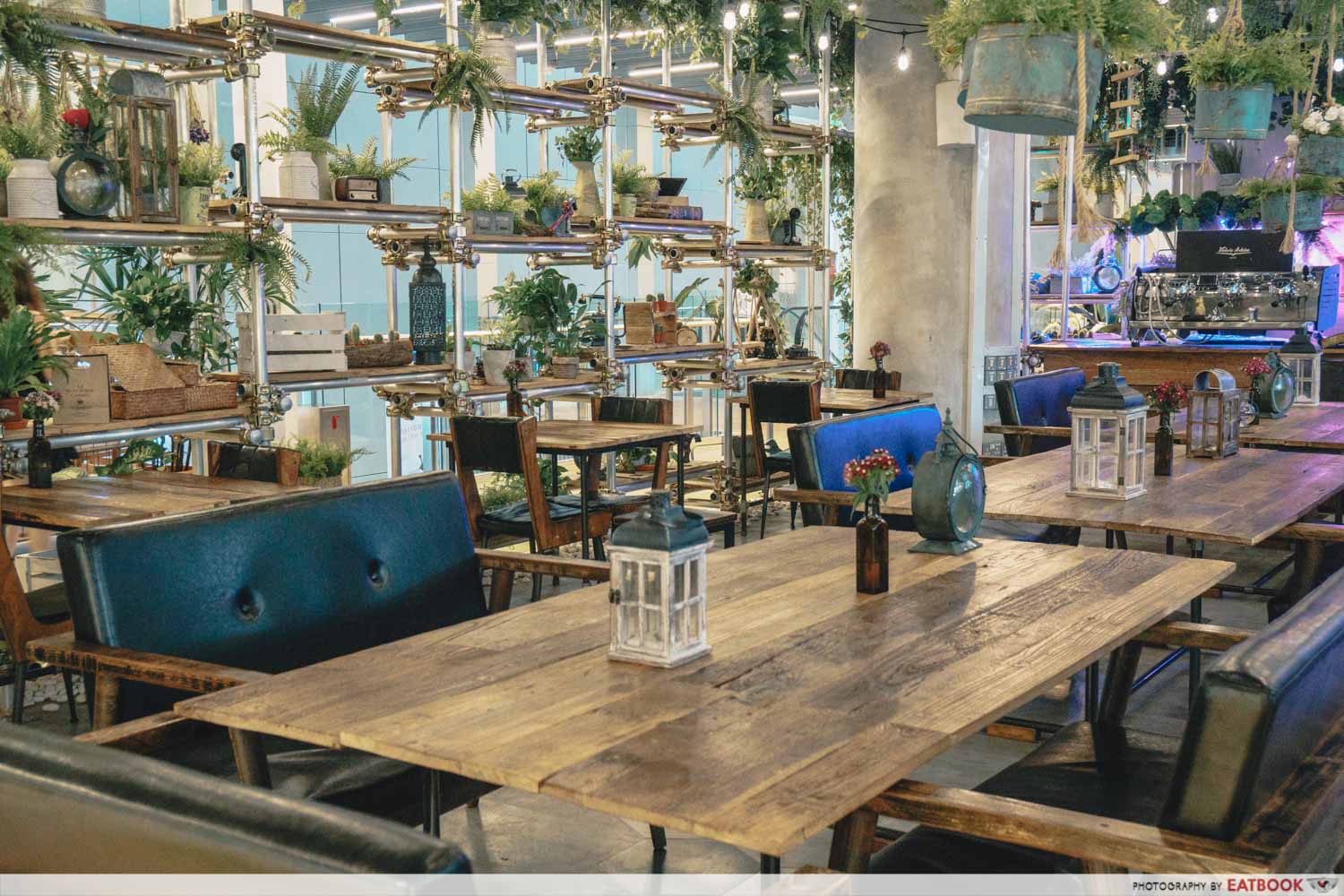 Expect a sort of Korean cafe scene meets New York City loft vibe here at Walking On Sunshine. There is a dark and moody zone in the middle, done up in an industrial chic style. It’s like walking right into an interior designer’s Pinterest page. The other corner features a ceiling full of dried flowers. In an instant, we are dining alfresco at the Hangang Park in Korea, surrounded by autumn colours such as magenta, pink, purple, yellow, and brown. 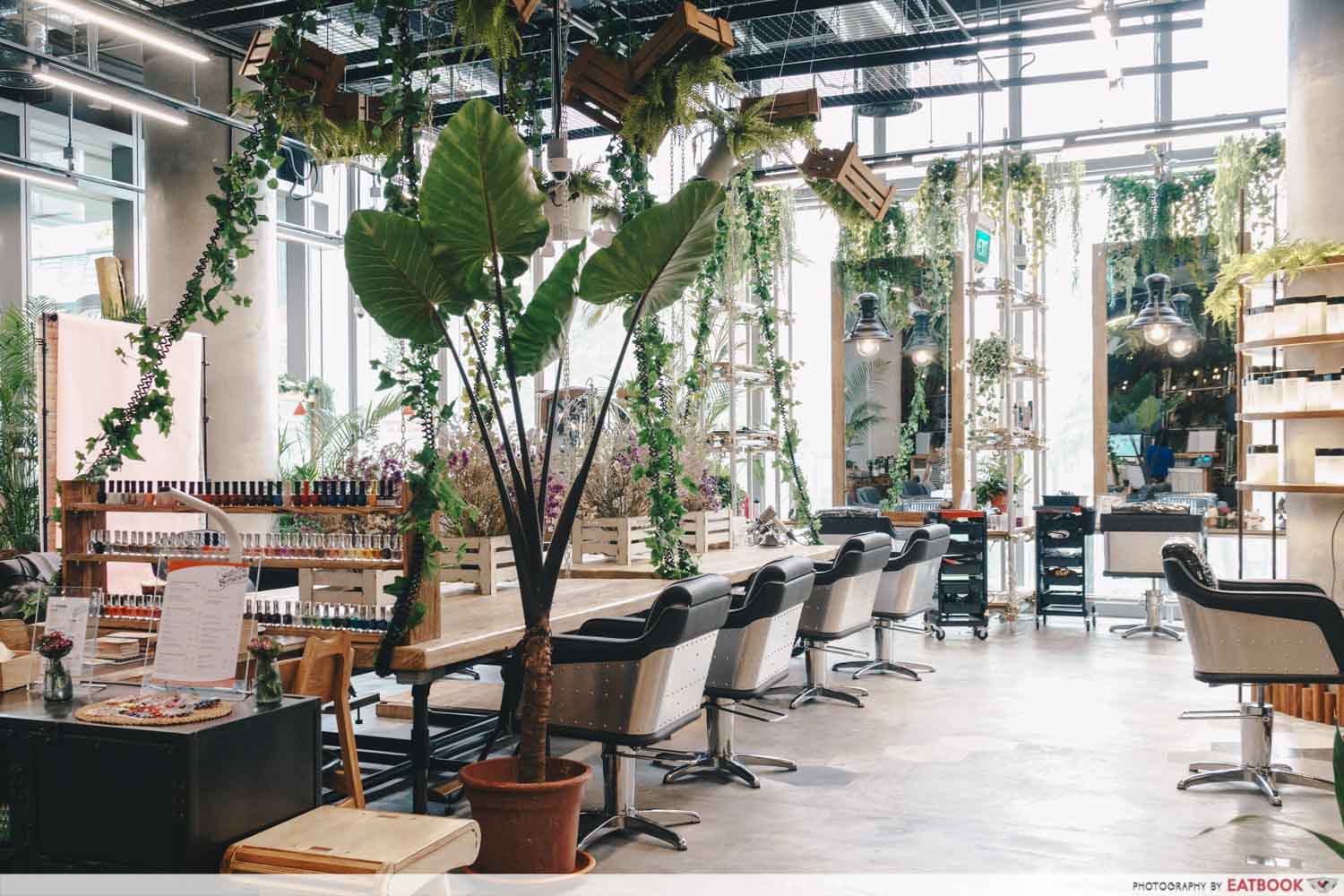 It might be hard to find a pretty place with good and natural lighting, but in the case of their salon, you need not worry. The entire section is light-flooded, making any hair cut look good. They also provide barber, nails, and make-up services. 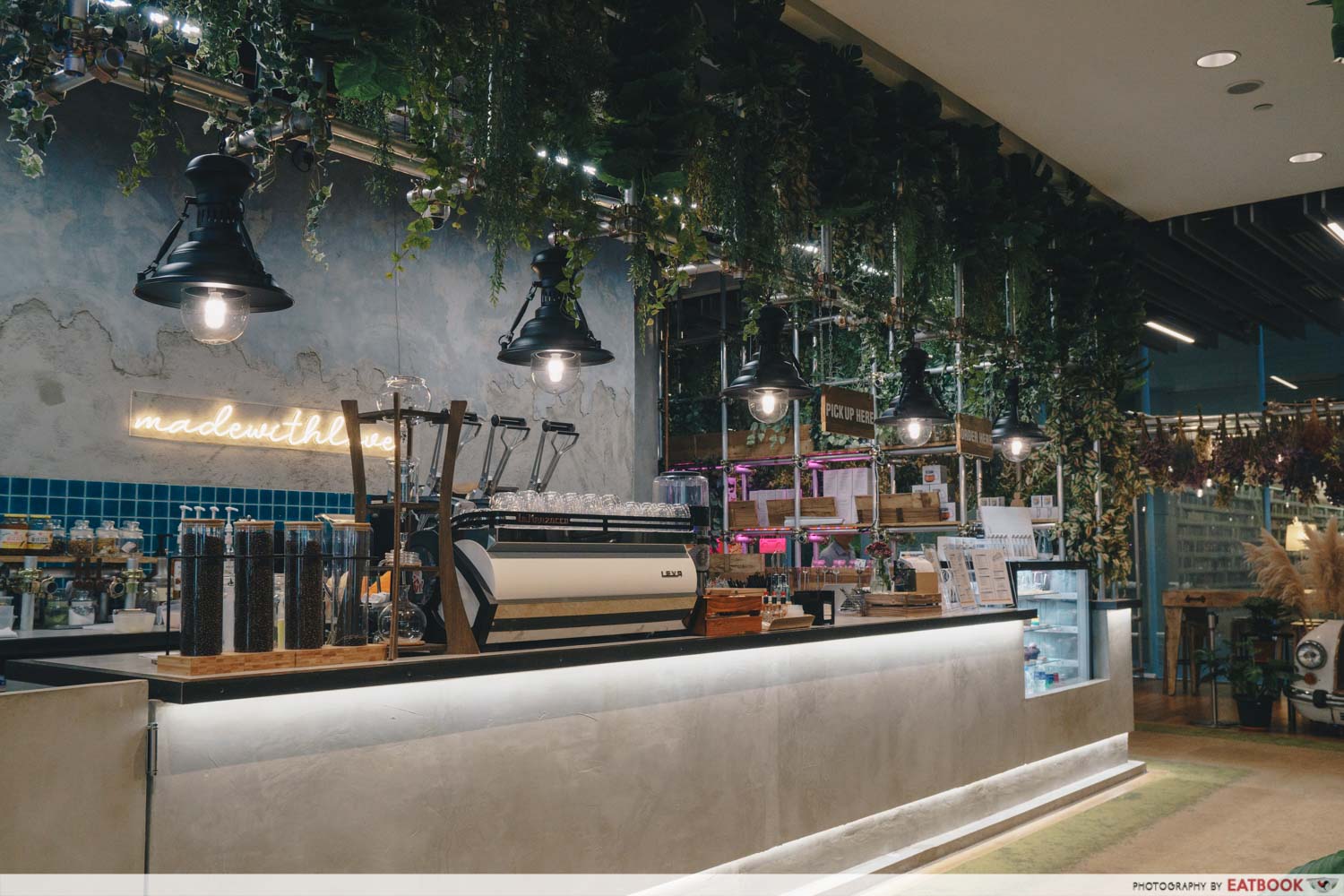 It is as if you might spot fairies dancing under a toadstool or prancing around the flowers at Walking On Sunshine. This concept store is one-of-a-kind and definitely calls for a revisit. Their food was hearty and presentable without being pretentious. Not to mention, full-size portions of these dishes are already above $15, giving this buffet a great value for money.

Students or working adults might find it helpful that there are plugs and free Wi-Fi available here!

Photos taken by Tan Ee Jing.
This is an independent review by Eatbook. 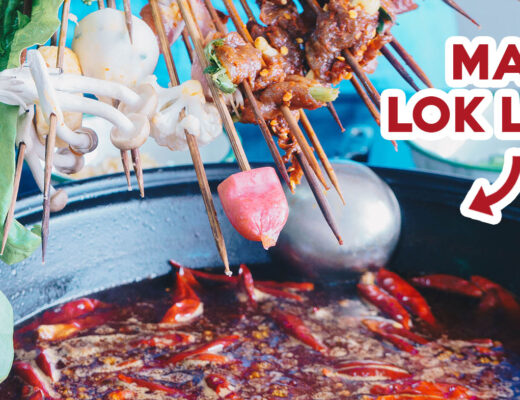 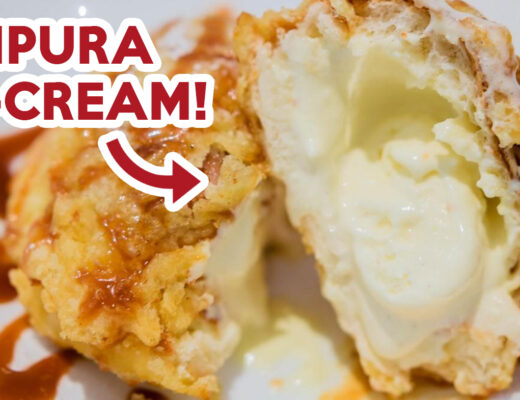