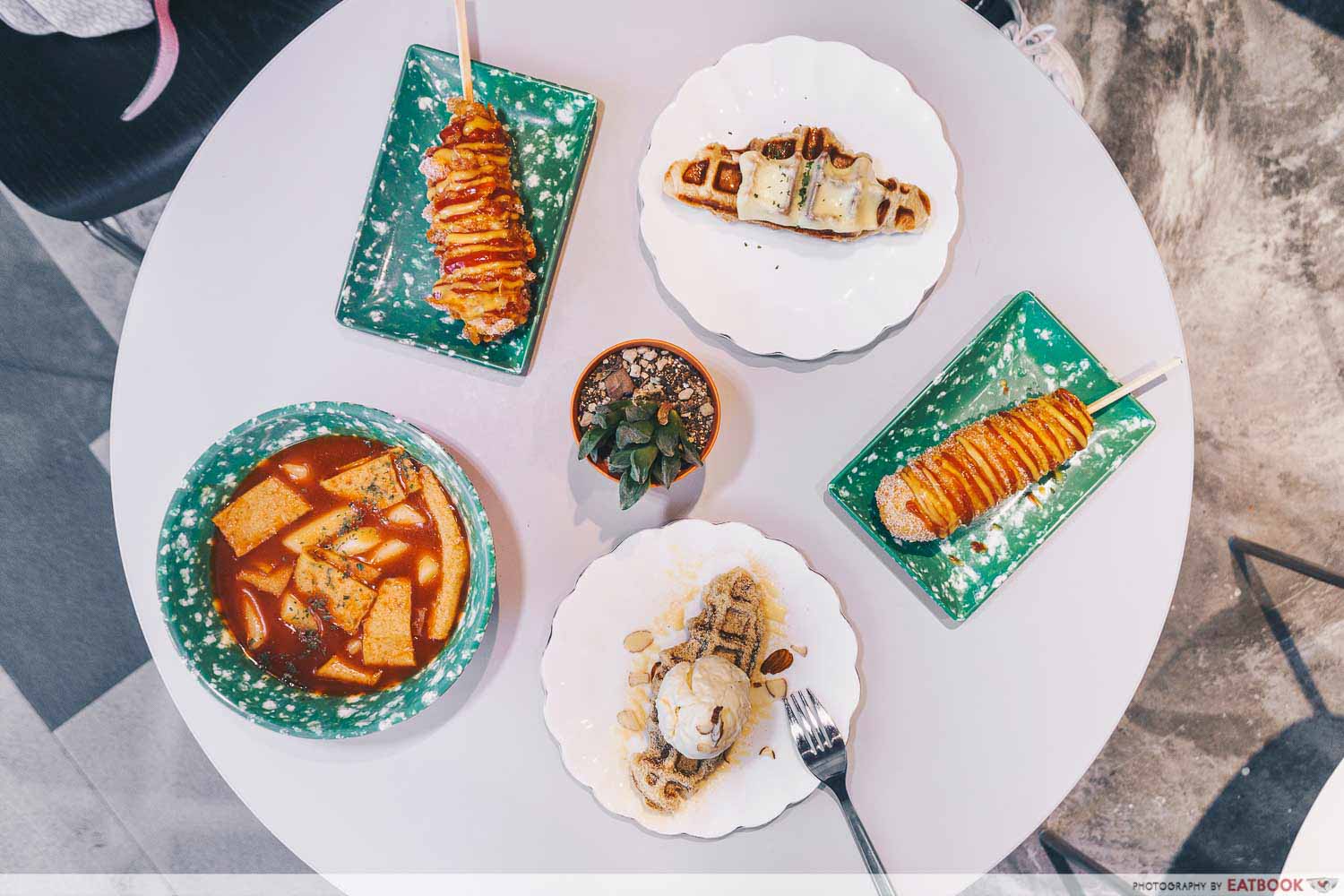 If you’re one of those whining that the Korean drama Start-Up has ended, Bunsik is a new Ang Mo Kio cafe that offers Korean street food including those mouth-watering corn dogs that Han Ji Pyeong enjoys so much.

Bunsik is a snack cafe related to Pluseighttwo, another cafe opened by Seo Eunkwang, a member of the K-pop boy band BTOB. The name ‘bunsik’ refers to affordable Korean dishes, particularly snacks, and that is exactly what the cafe offers. Bunsik is home to both trendy Korean cafe fare and popular street food. Stepping into the pristine cafe, I was welcomed by a soft playlist of K-pop hits. I’m not going to lie, this one’s definitely for the K-pop fans. 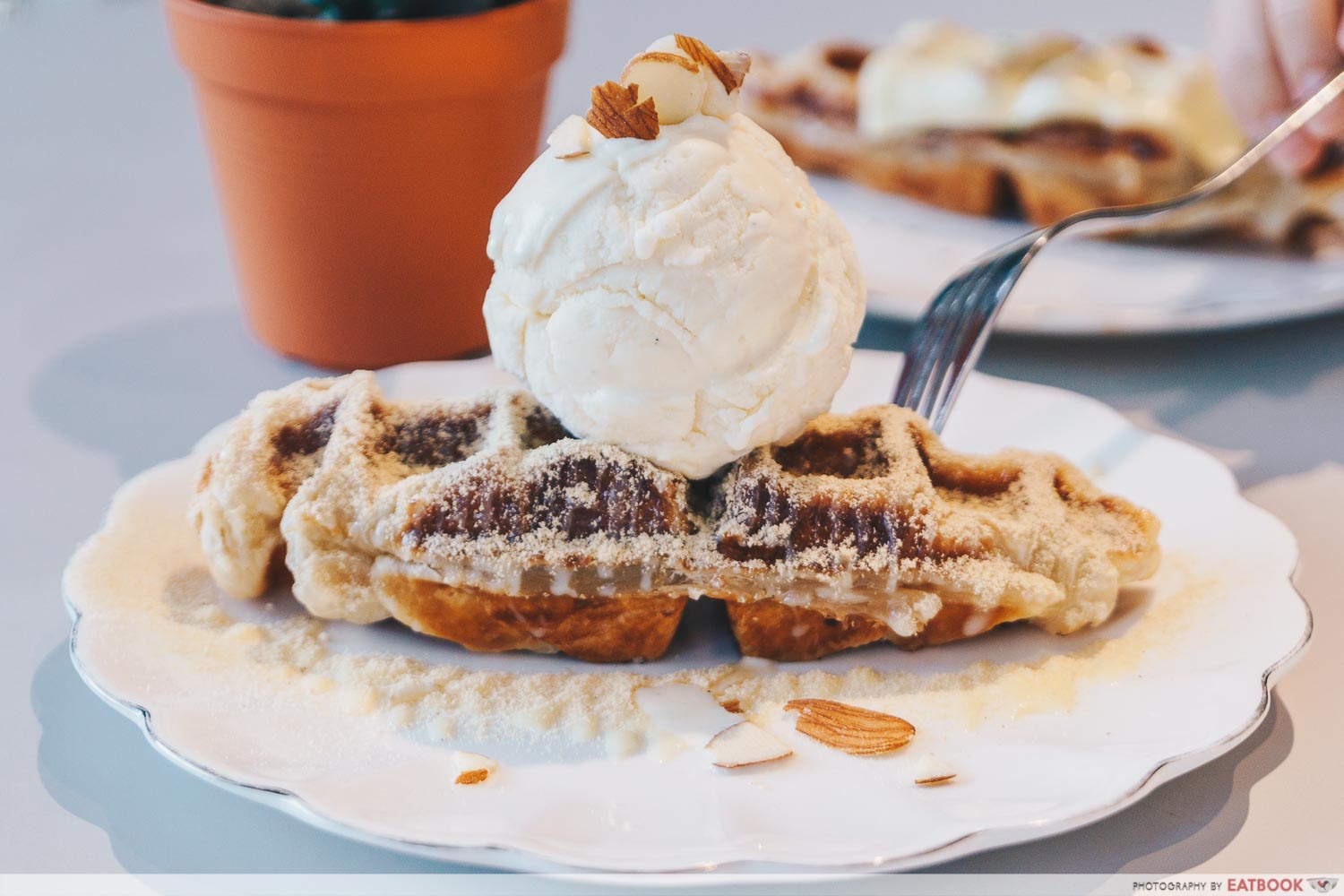 I was instantly drawn to the croffles on their menu. Croffles are basically a crossover of croissants and waffles currently trending in Korean cafes. Being a fan of Korfe’s injeolmi mochi bread, I started with the Single Injeolmi Croffle ($5.50) with an added scoop of vanilla Ice Cream ($2). 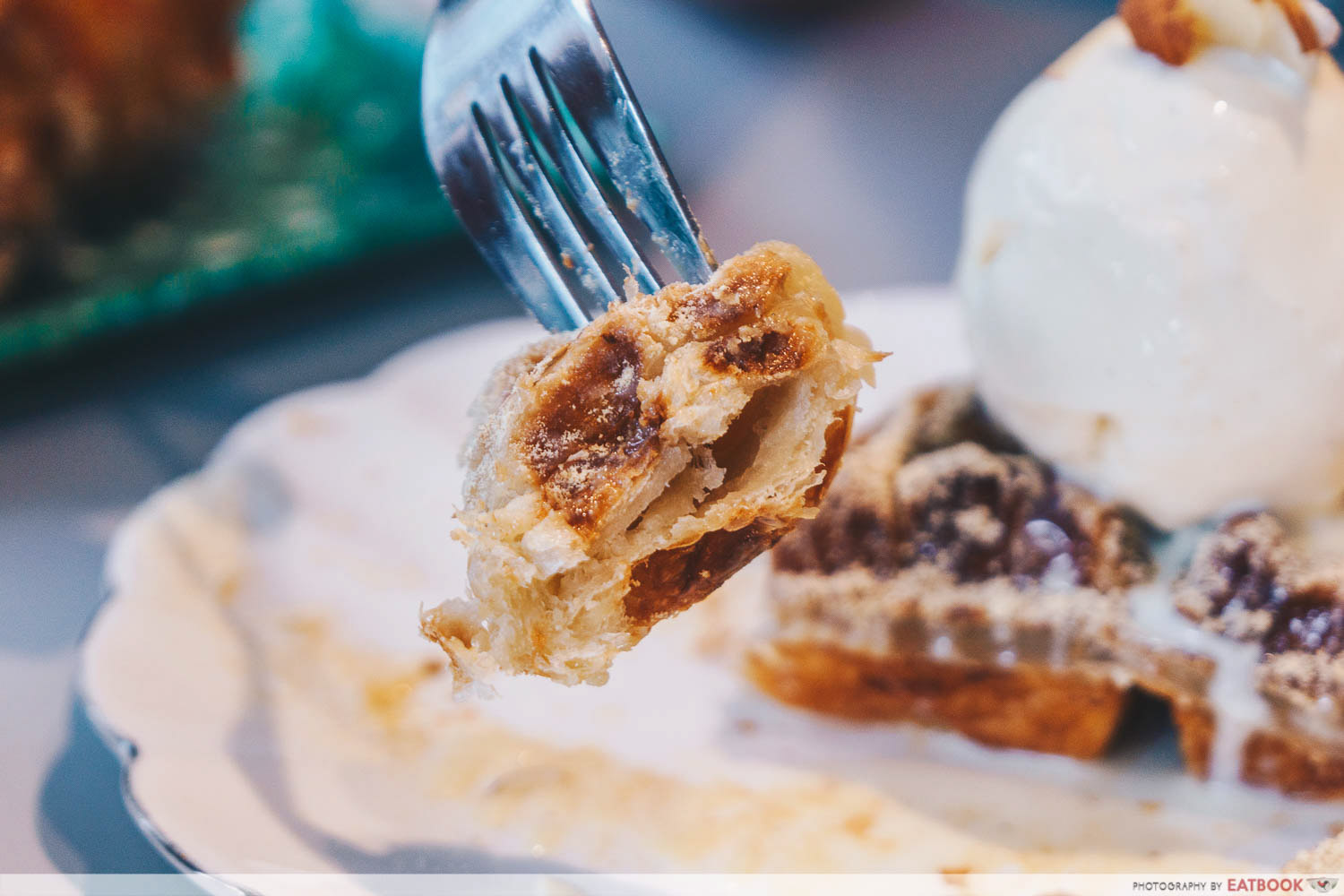 Many cafes dabbling in croffles have tried various renditions, including ones filled with jam and more. Bunsik keeps it simple with a fluffy yet chewy pastry, complete with crisp and flaky edges. The sprinkle of soybean powder atop our croffle gave an extra punch of nuttiness.

Paired with creamy, honeyed vanilla ice cream, the croffles made for a sweet yet light dessert. 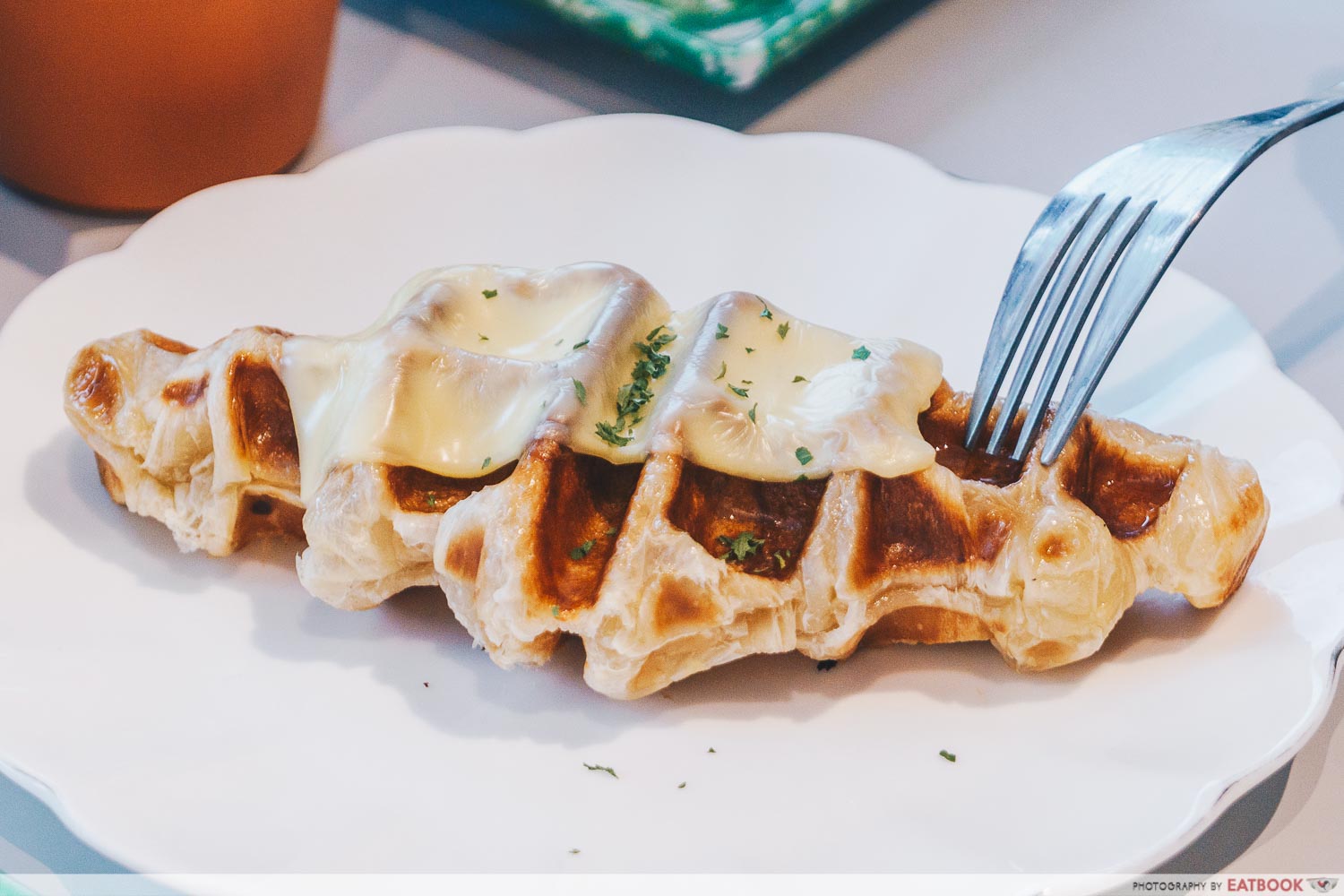 Excited to switch to something savoury, I also gave the Single Cheeze Croffle ($5.50) a try. This little treat came with half a slice of pre-packaged cheese singles, partially melted and clinging to the croffle.

While I was still happy munching on the same buttery pastry, I wasn’t quite a fan of the processed cheese, which stuck to the roof of my mouth and gave the croffle an unwelcome rubbery texture. I headed for some street food next. Bunsik’s corn dogs come in four renditions: Original ($4.50), Mozza ($5), Cheddar ($5), and Cereal ($5). As one hungry for that IG-worthy cheese-pull shot, the Mozza was an easy pick. Its caramelised batter gave satisfying crackles as I bit into it, revealing milky, stretchy cheese wrapped around a meaty sausage. 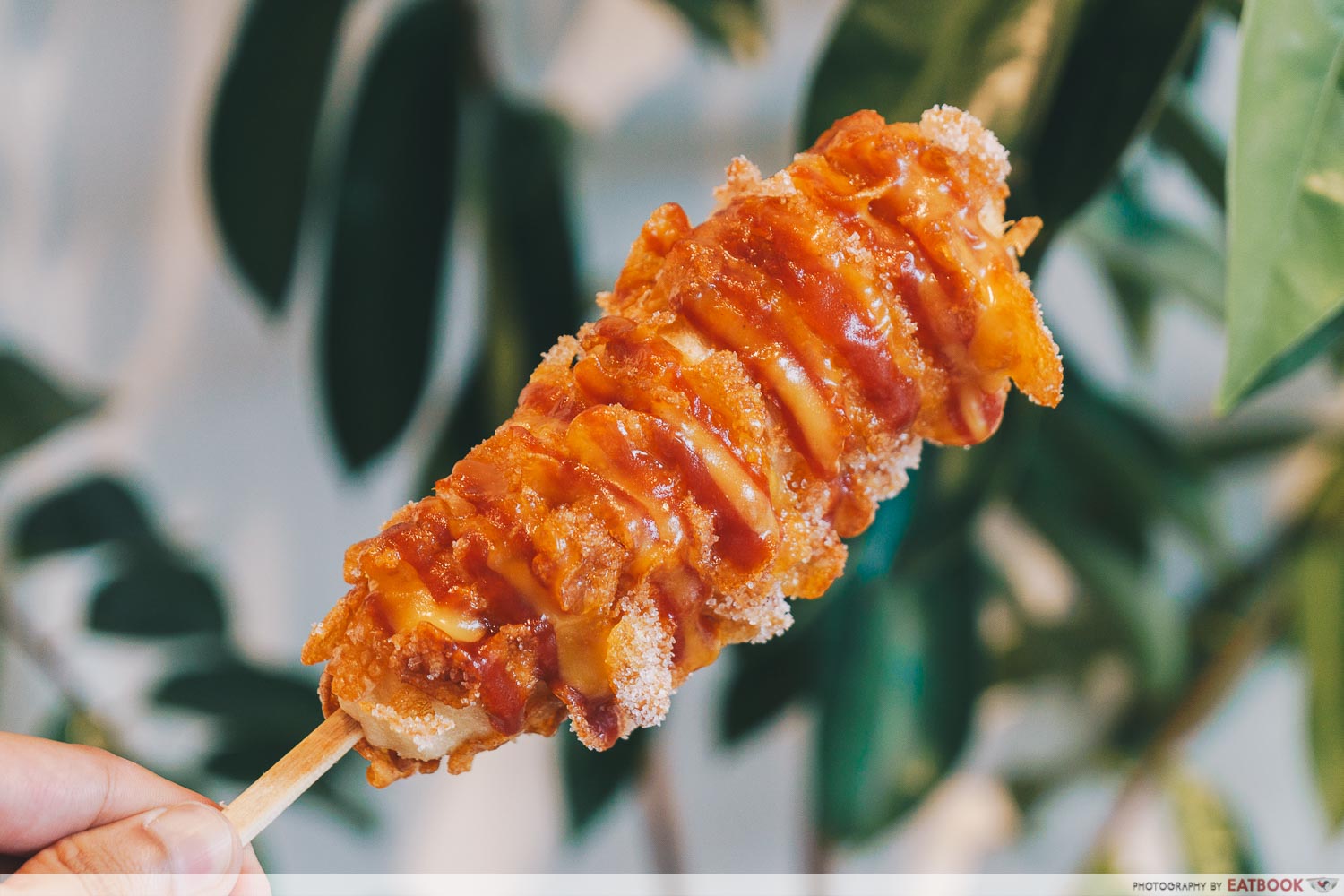 Ticking the cheese-loaded dishes off my list, I quickly went for the Cereal corn dog. A bite down the cereal corn dog gave loud, obnoxious crunches from both the brittle cereal and its well-fried exterior. 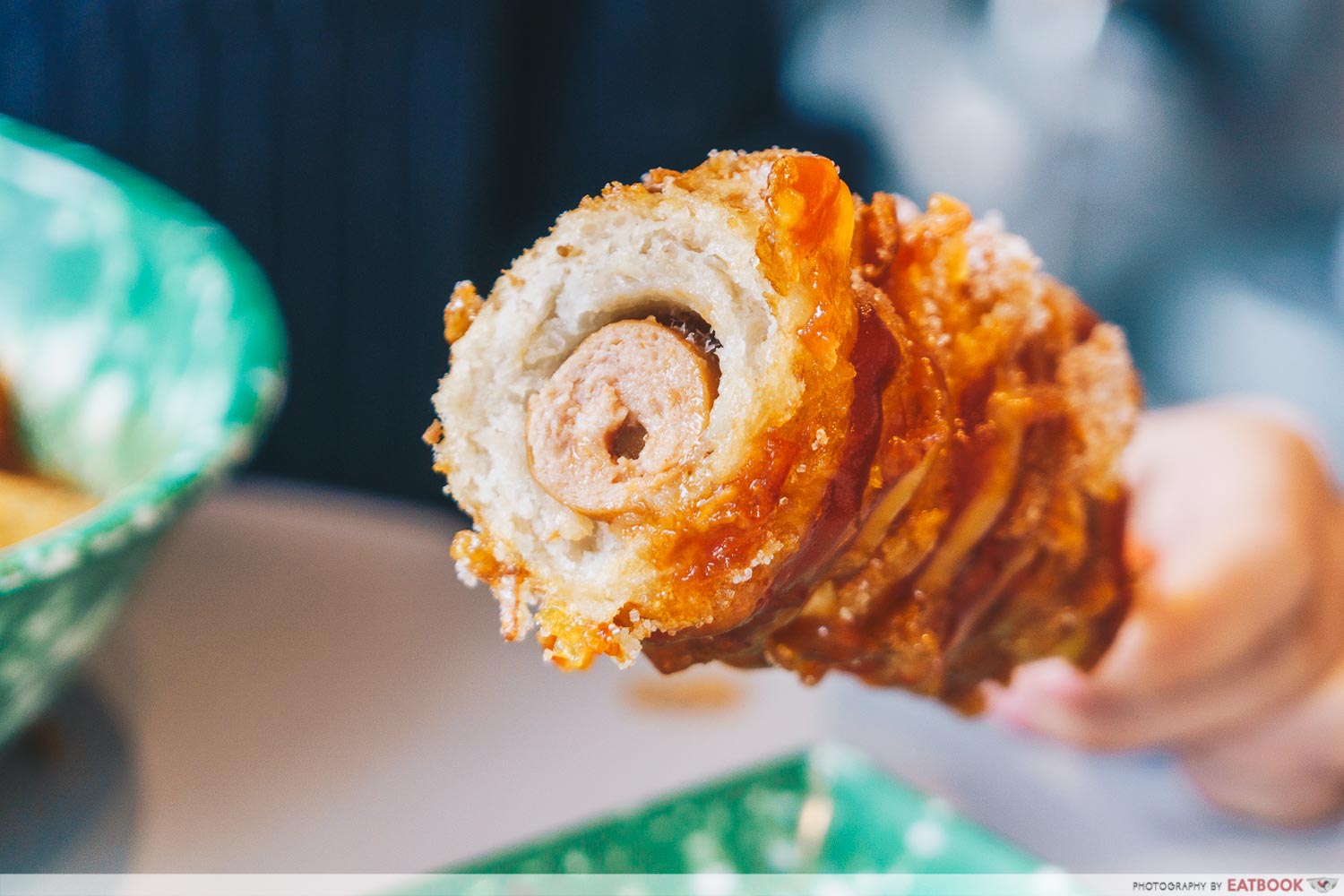 This cereal corn dog had a dense interior from the thicker layer of batter used in place of molten cheese, creating an overall doughier corn dog which ran slightly bland. While the layer of cereal added extra texture, I preferred the mozzarella rendition much more. 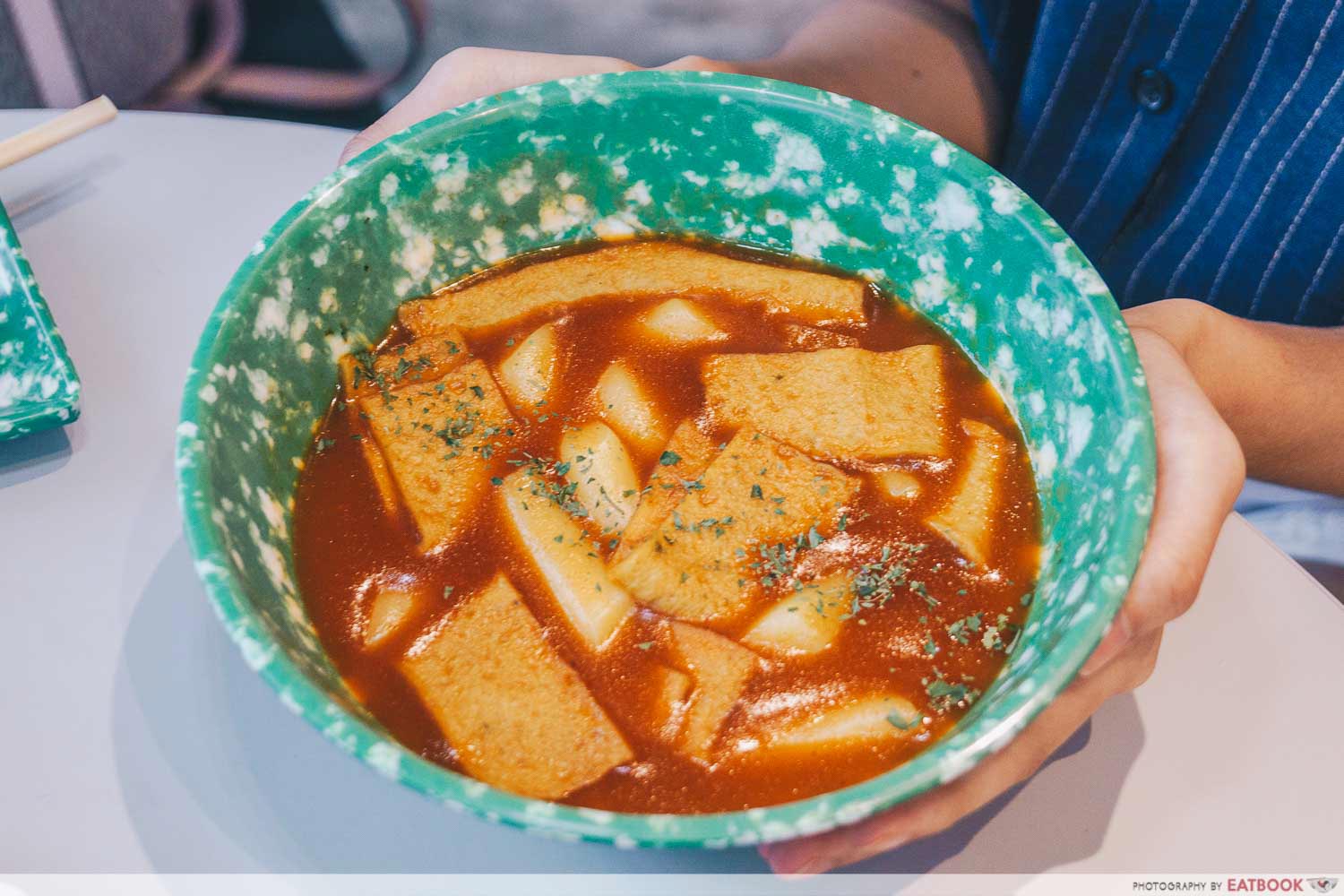 When Korean street food is mentioned, rice cakes, better known as tteokbokki, often come to mind. Though I’m not exactly the best at tolerating spicy food, I had to try the Ddeokbokki ($9.90) at Level 3—the spiciest option available.

This bowl of tteokbokki and fish cakes came served doused in a piquant sauce and packed a harmonious combination of spicy, sweet, and savoury flavours. 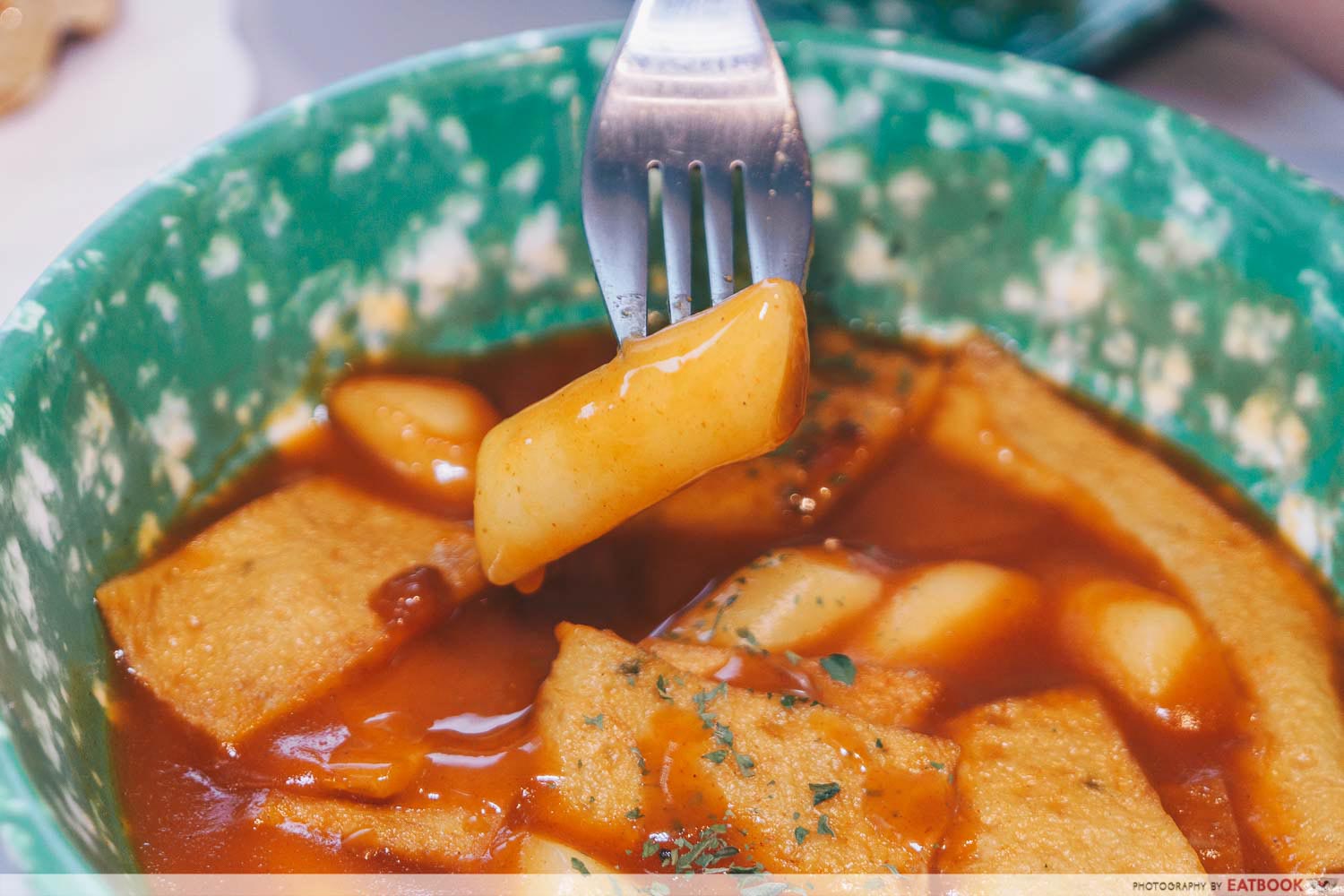 Tteokbokki, when done badly, tends to get soggy and limp. Bunsik’s rice cakes had none of that mushy business going on and I happily chewed on their firm and chewy tteokbokki. 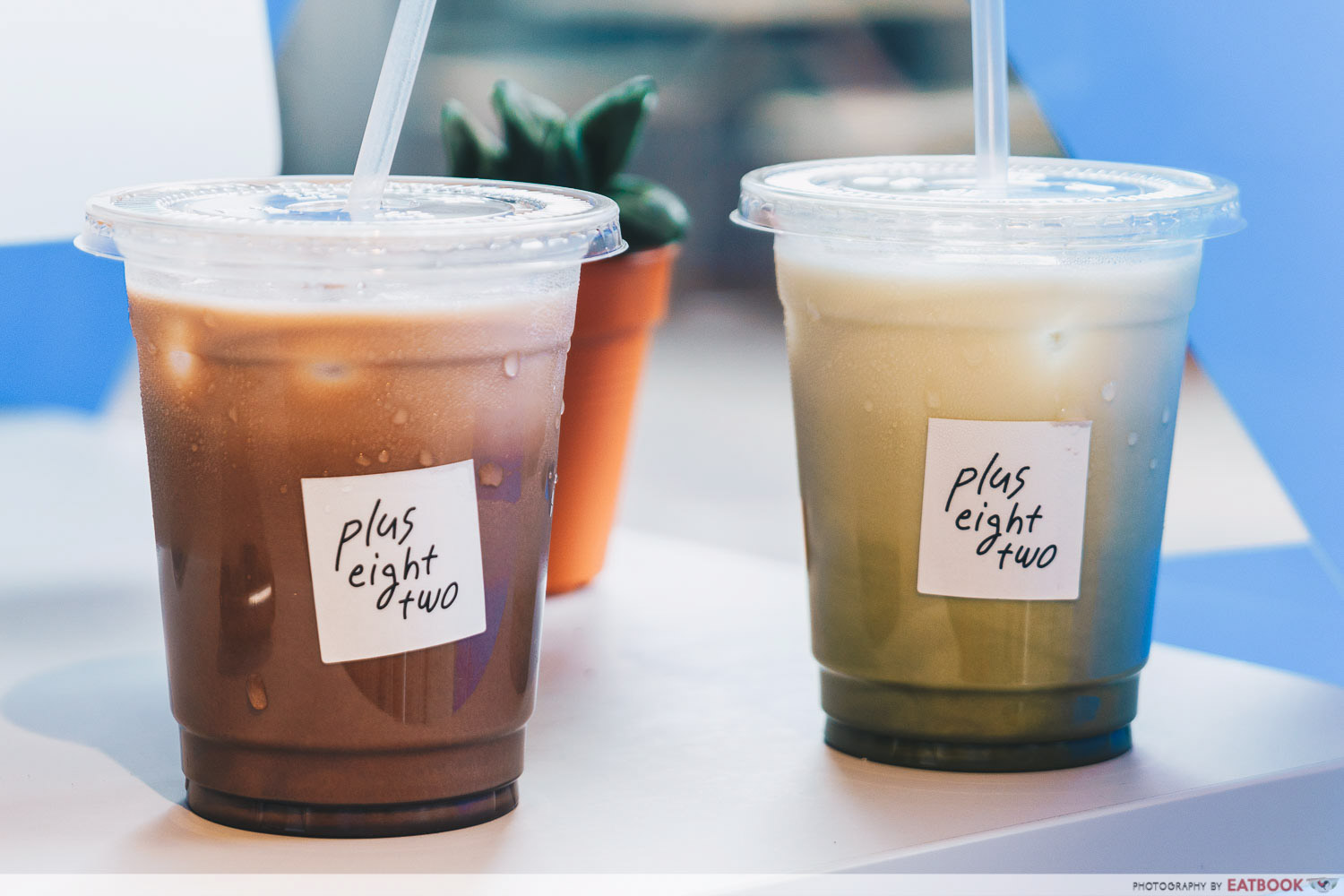 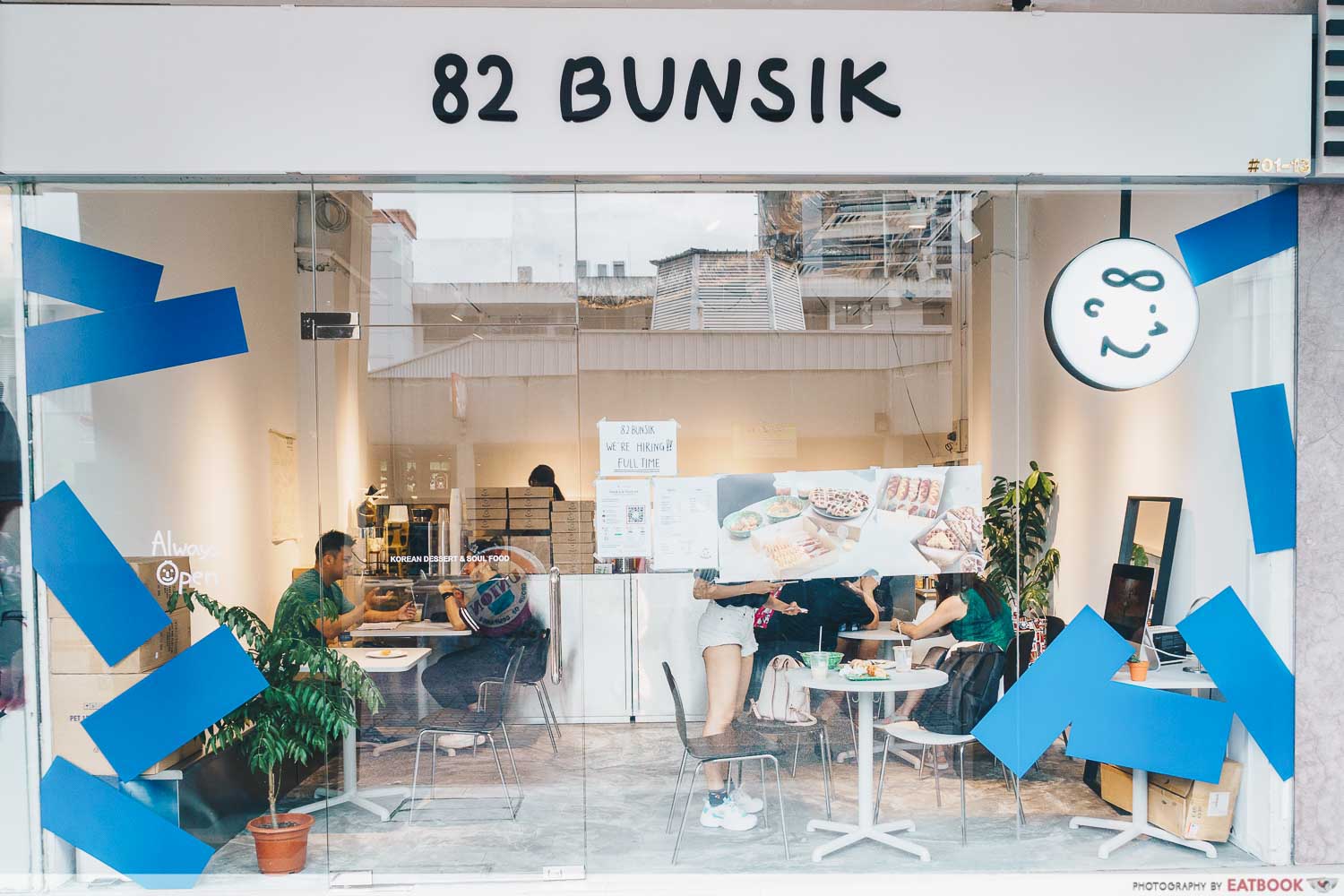 A 10-minute walk from Ang Mo Kio MRT Station brings you to Jubilee Square where Bunsik is located. Do also note that the road there isn’t fully sheltered. The cafe itself is small and cosy, though seats are few and often occupied by students. 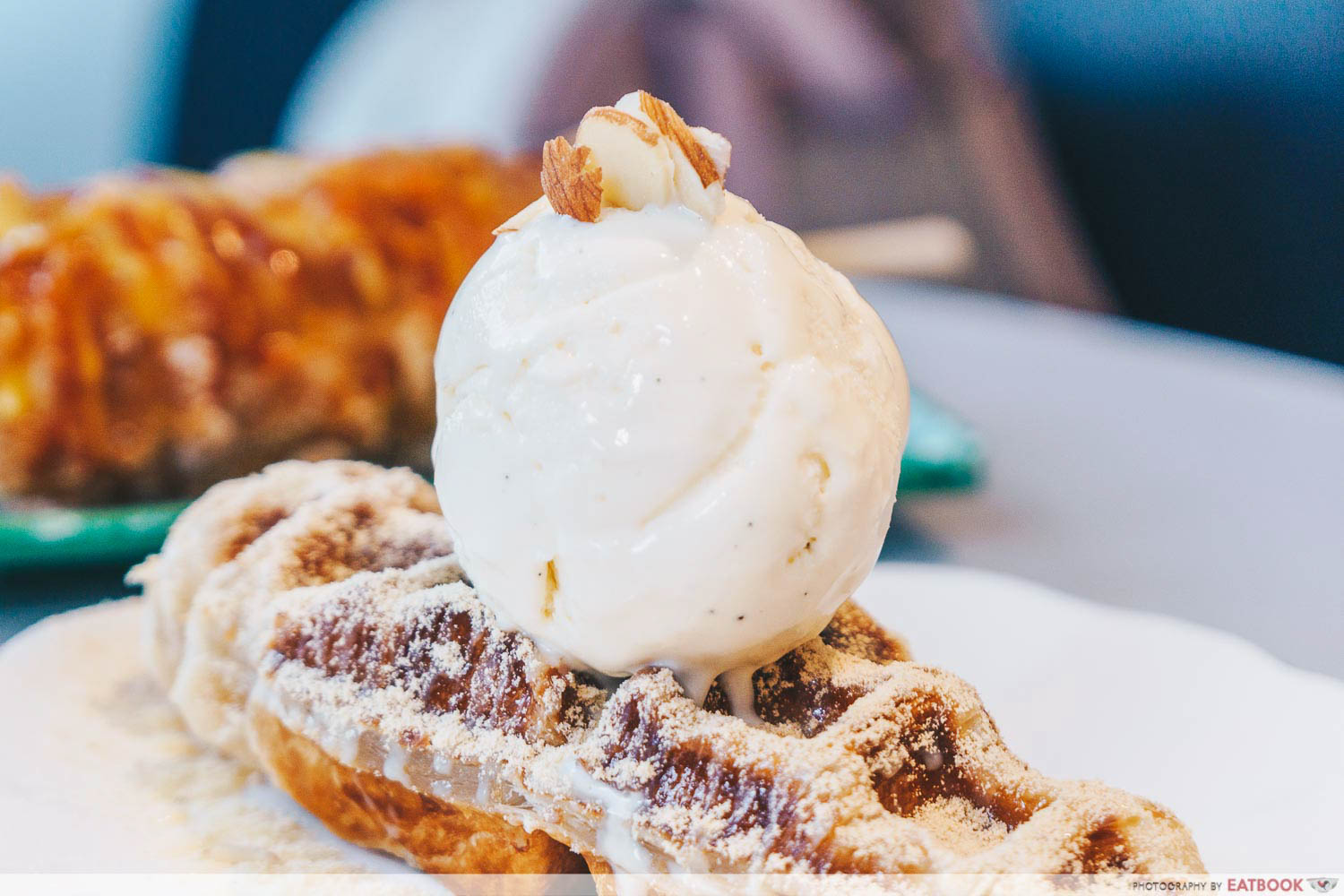 Bunsik provides tasty and enjoyable snacks. In fact, being a Northie, I can most definitely see myself returning for a fix of those injeolmi croffles and ice cream. However, with a limited menu and a few slight misses, the cafe leaves a bit more to be desired.

For other cafes, do also check out PIVOT which serves a variety of mini cakes such as hojicha cakes. Otherwise, get your fix of ice cream and waffles at Pints & Cones as well. Asyraf’s Halal Corner: New Halal Cafe In The CBD With Prices Under $7 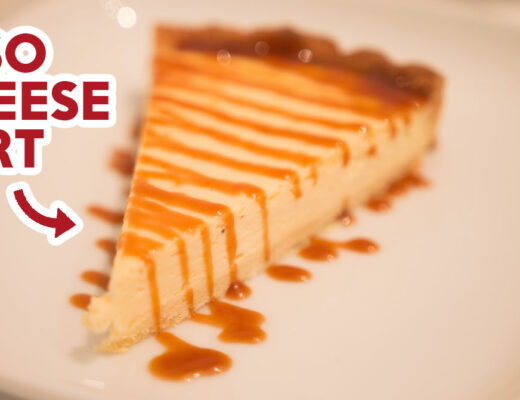 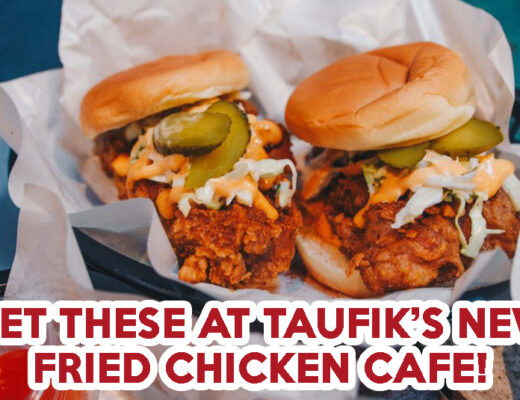