Over a week into the Circuit Breaker implementations, many of us have started digging out our pots and pans, thanks to a renewed interest in cooking. If the kitchen is foreign territory to you, and having the same instant noodles for all your meals is starting to get old, it’s probably time to try out these easy instant noodle recipes.

From spicy dan dan noodles to sweet and savoury pad Thai, these recipes will turn your basic instant ramen into legit noodle dishes. You need common pantry ingredients, but for some recipes it will also require things from the supermarket or a Korean mart. Dan Dan Mian is a popular Sichuan noodle dish served with a nutty, savoury, and spicy sauce. Much like most other Sichuan dishes, its spice level isn’t for the weak-hearted. With one packet of chicken-flavoured instant noodles and some peanut butter, you can recreate this classic dish at your own home. 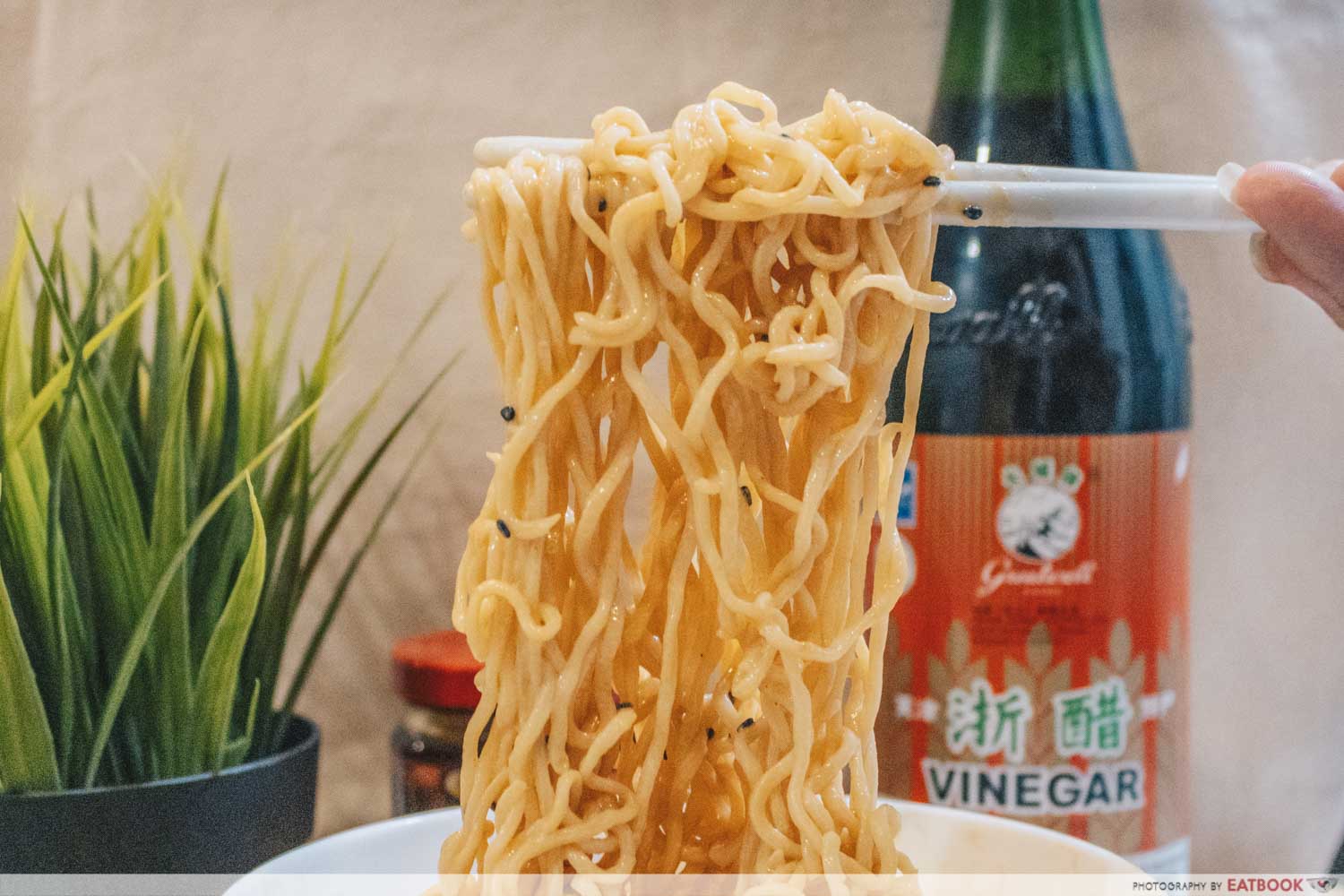 Adjust the amount of chilli oil in the sauce depending on your preference. For spice lovers, give the dish an extra numbing effect by sprinkling in some Sichuan peppercorn. This dish is conventionally eaten with minced meat and some greens, but feel free to throw in any leftover ingredients in your fridge. 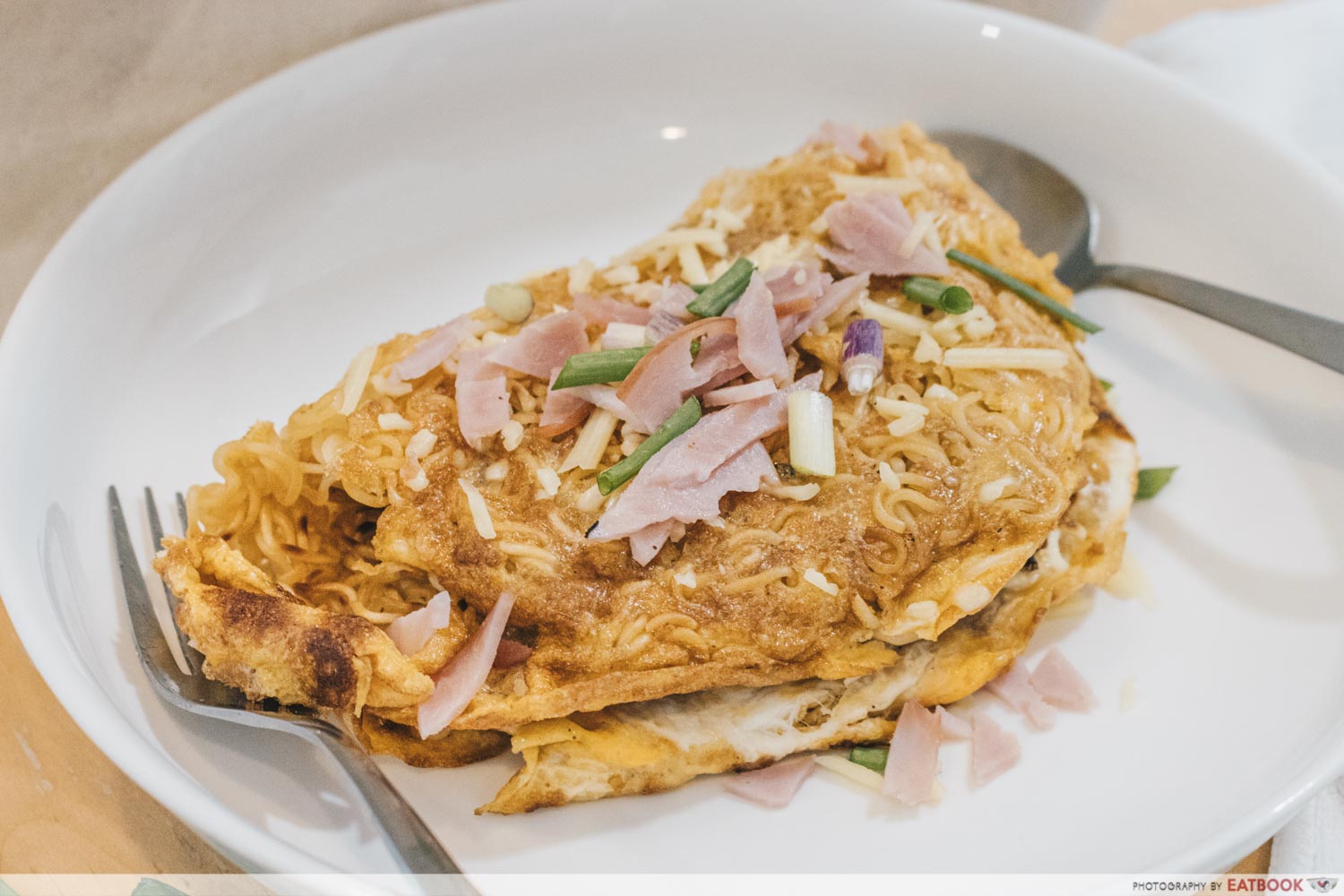 The Ramelette is a literal combination of ‘ramen’ and an ‘omelette’. This is a glorious union of two pantry staples that can be whipped up by the most amateur of cooks. Instead of a cracked egg floating atop the noodles, the egg in a ramelette takes the limelight instead. The ramelette has a crisped-up brown exterior and a bouncy texture in the center. 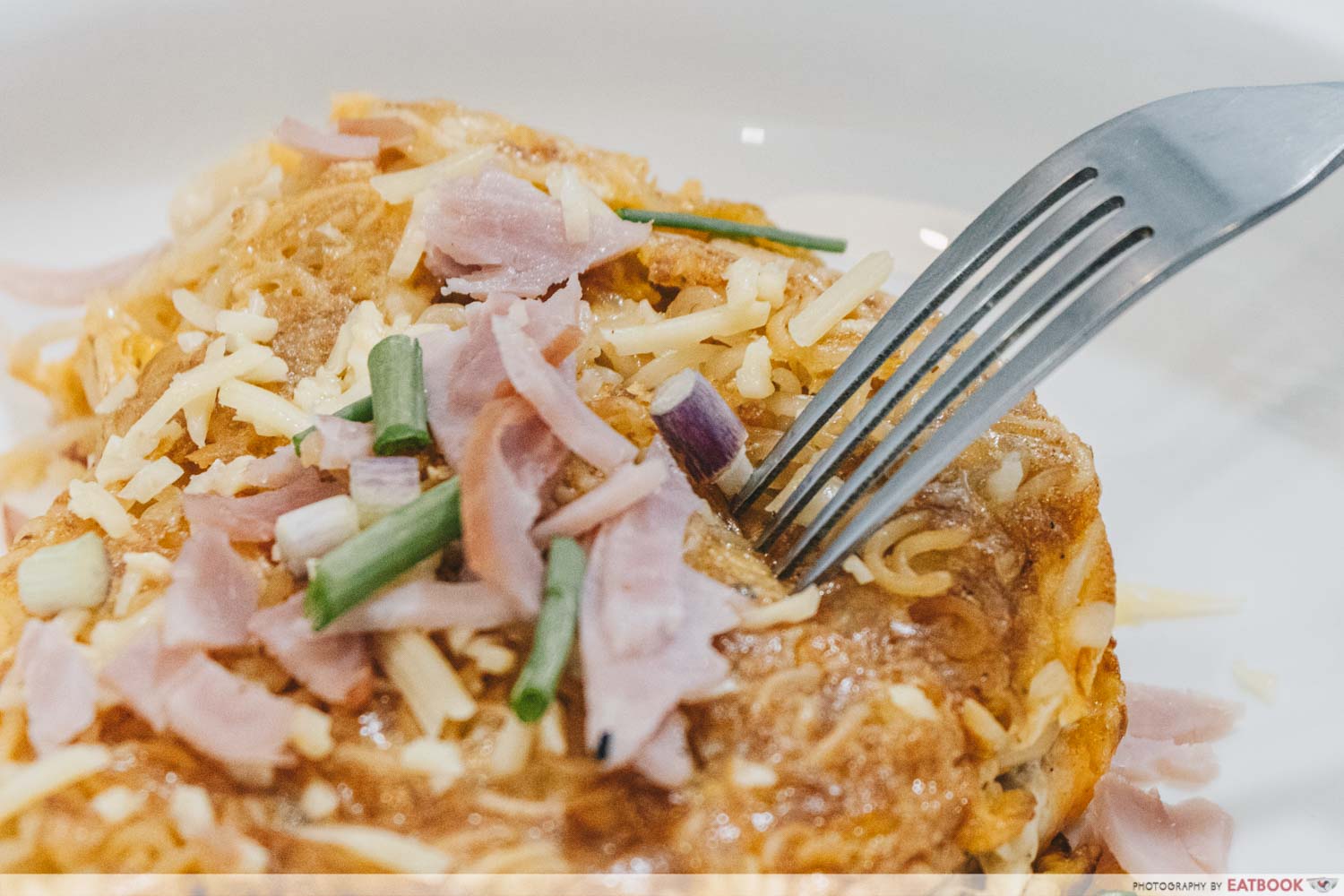 As one of the easiest on our instant noodle recipes list, this whole dish can be prepared in a single frying pan. One important step is rinsing the noodles under cold water after boiling it. Doing this stops the noodles from cooking further and becoming too soggy. Treat this dish like a regular omelette and zhng it up with cheese, ham slices, mushrooms, or veggies as much as you like! 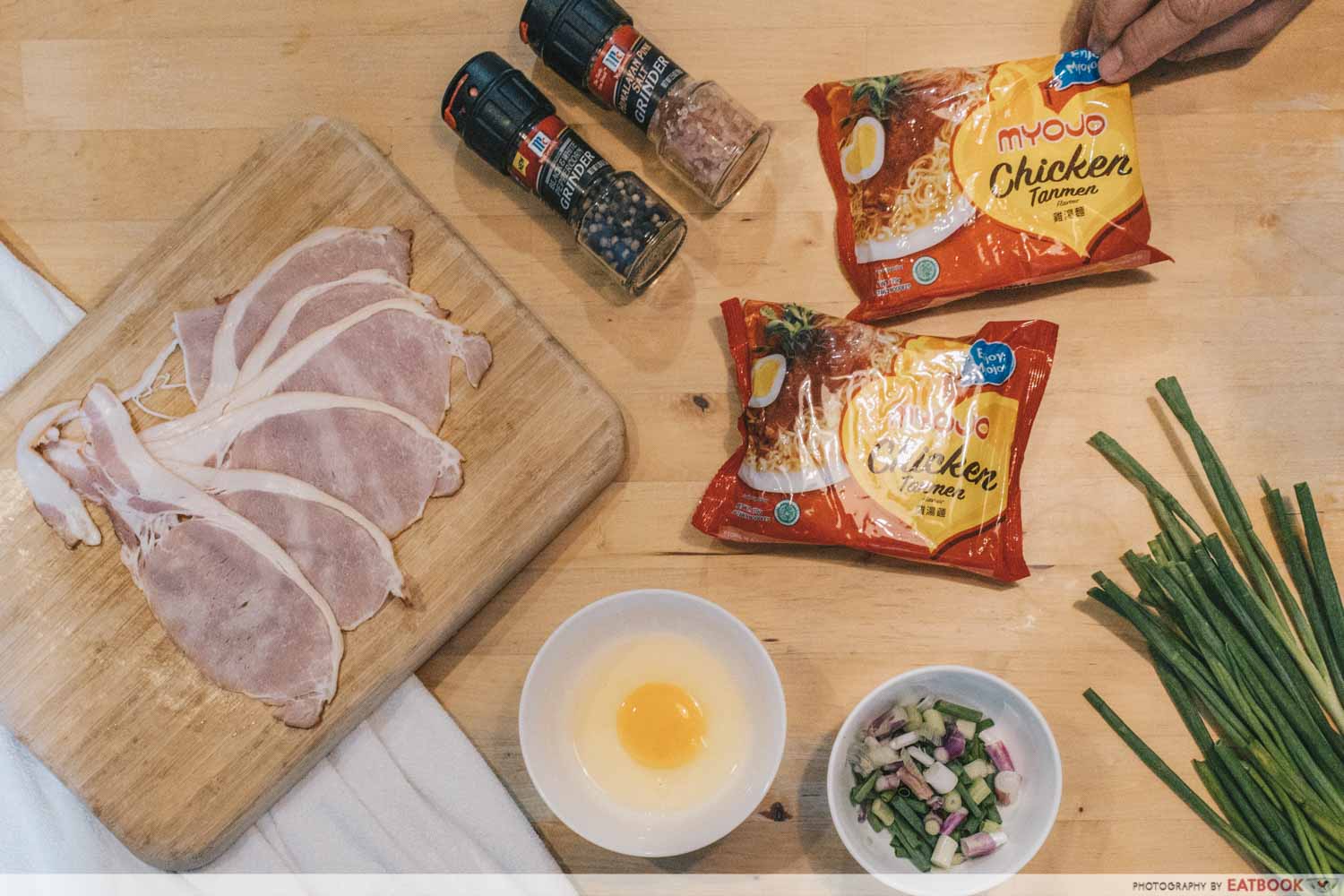 We can’t go out for a tonkotsu ramen fix now, but we can at least recreate a Poor Man’s Tonkotsu Ramen at home. A good pork bone stock usually takes hours or even days to attain its rich, savoury flavour. In this stay-home version, we’ll be using fatty bacon as a replacement for chashu slices as well as to infuse as much pork flavour as we can into the toppings. 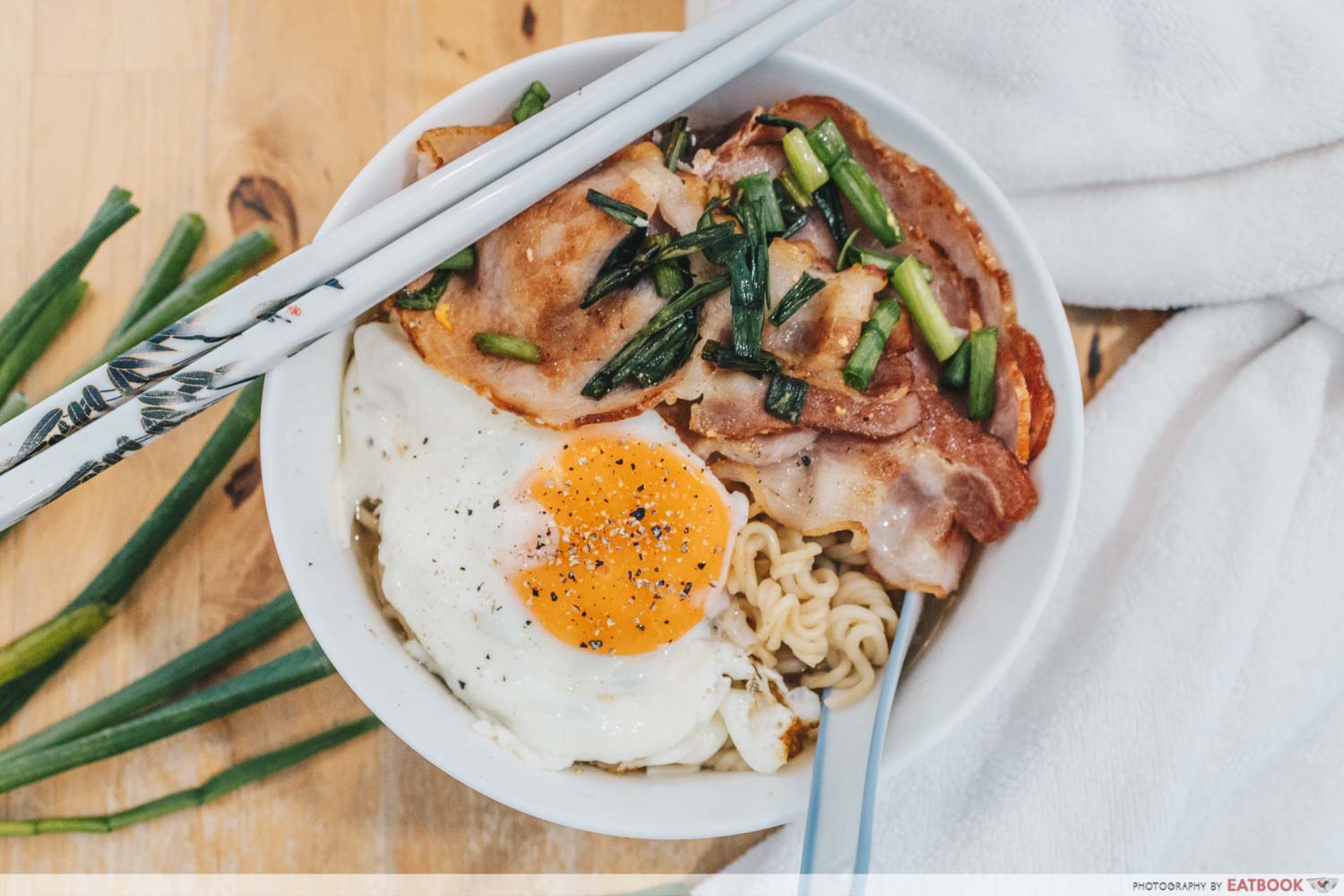 The simplest chicken-flavoured noodles will work for this recipe. A vital step is to reserve the bacon fat and use it to cook your other ingredients, thus retaining all of the mouthwatering umami flavours.

Pro tip: keep the yolk runny while frying your egg; the rich yolk adds creaminess to the broth! 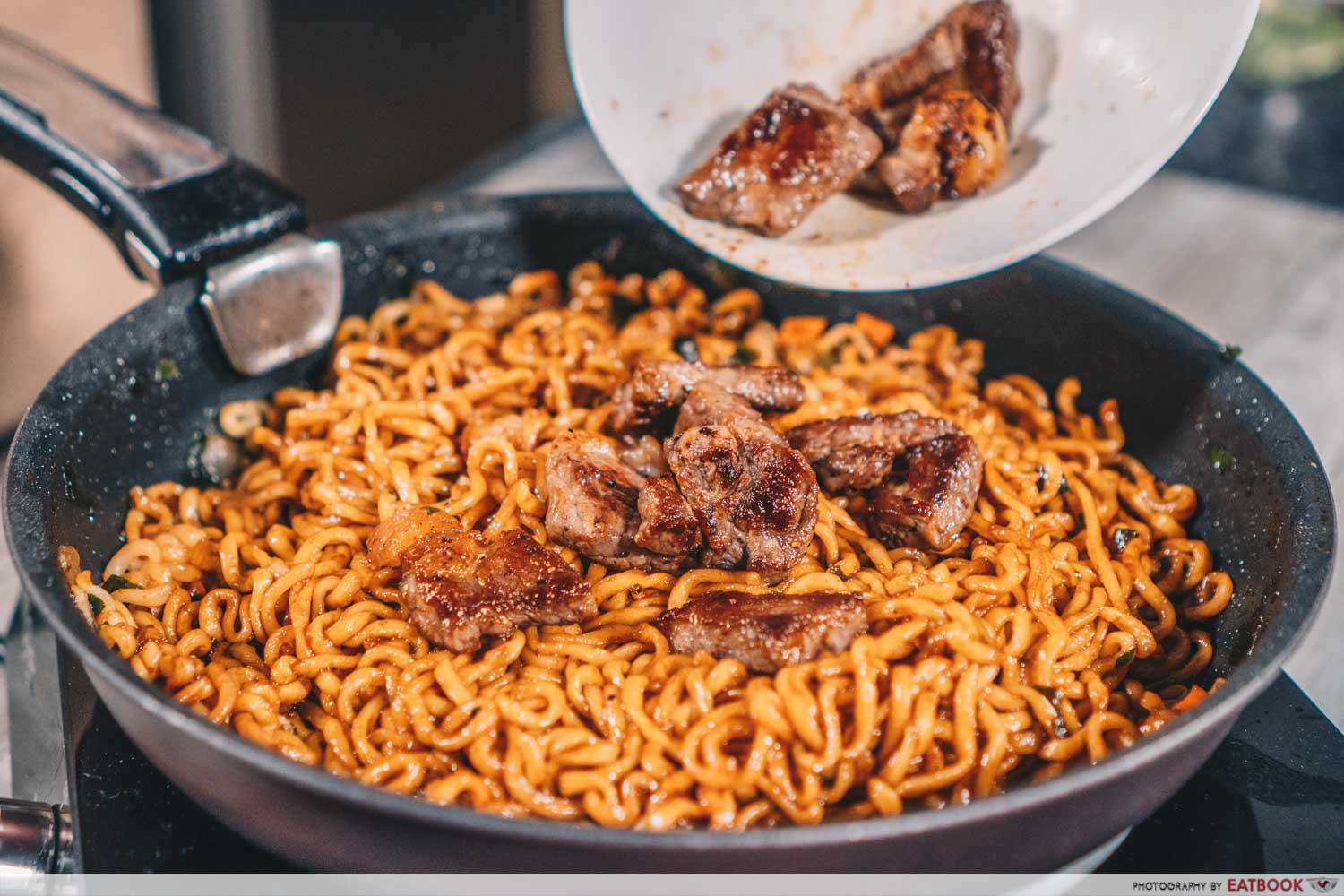 The Steak Ram-don went viral after the Oscar-winning Korean movie ‘Parasite’ blew up, with a scene centred around this iconic dish. In the film, the ahjumma cooks up the steak ram-don using only three ingredients under eight minutes, so this dish won’t be a difficult one to recreate. 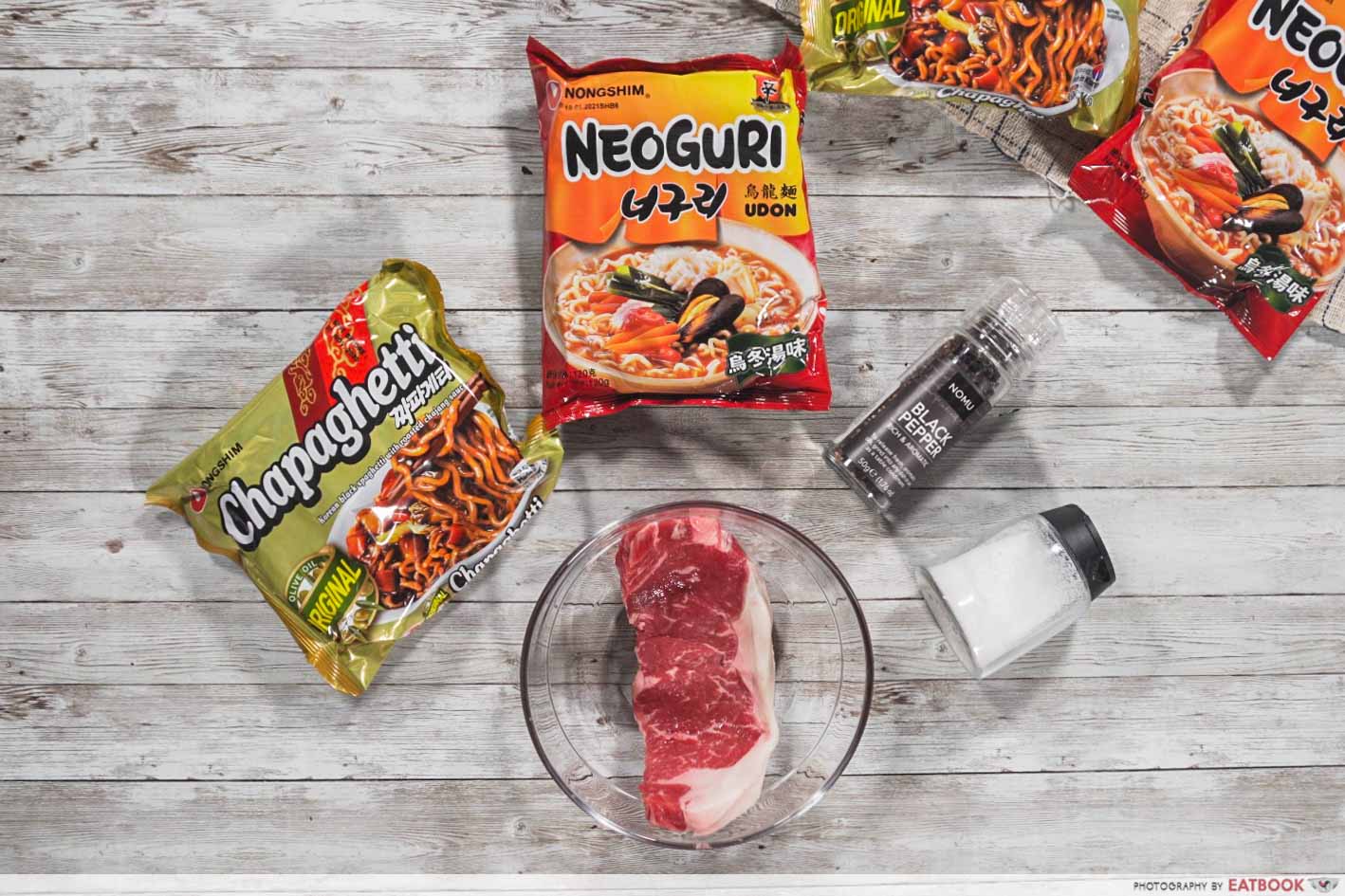 The dish calls for a packet each of Chapaghetti and Neoguri instant noodles, the former is an instant black bean noodles, and the latter is a spicy seafood udon. While this pairing is nothing groundbreaking in Korea, the film’s version introduces a third element: premium marbled beef, which we’ve substituted with Australian Angus beef in our recipe.

Check out our full recipe of the famous ram-don! Marrying intense heat with the smoothness of tofu, this instant noodles creation is reminiscent of mapo tofu. Adapted from South Korean TV presenter, Park Jiyoon’s recipe, this Korean instant Mapo Tofu Ramen can be considered the extra spicy sibling of the steak ram-don. 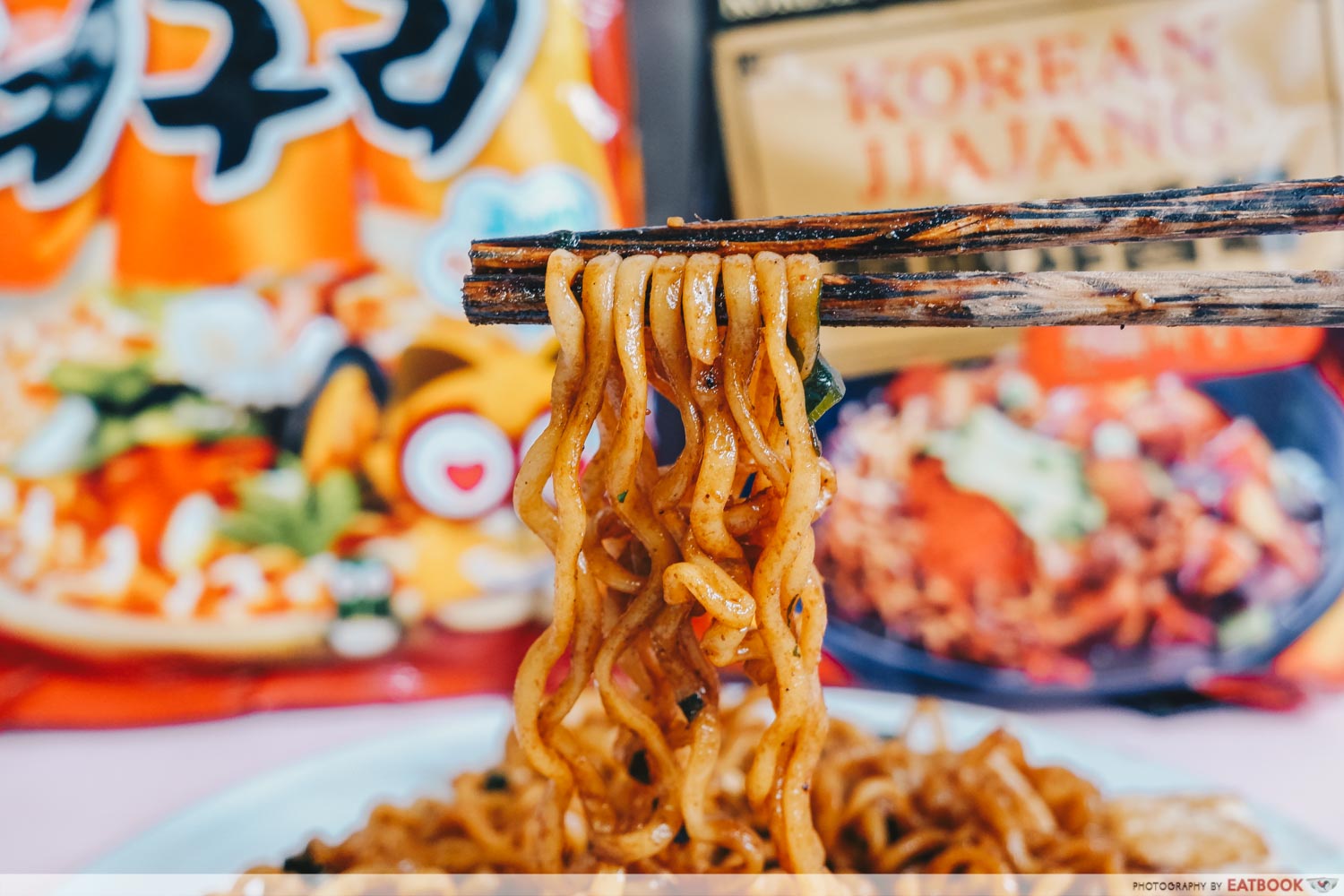 The mapo tofu ramen combines spicy jjajangmyeon together with spicy seafood instant noodles, bringing a shiok kick of heat to counter the heaviness of the savoury noodles.

The spicy noodle combination is best eaten together with a cube of crispy tofu as its light flavour balances out the greasiness of the dish. Top it up with some ground pork or beef for protein! 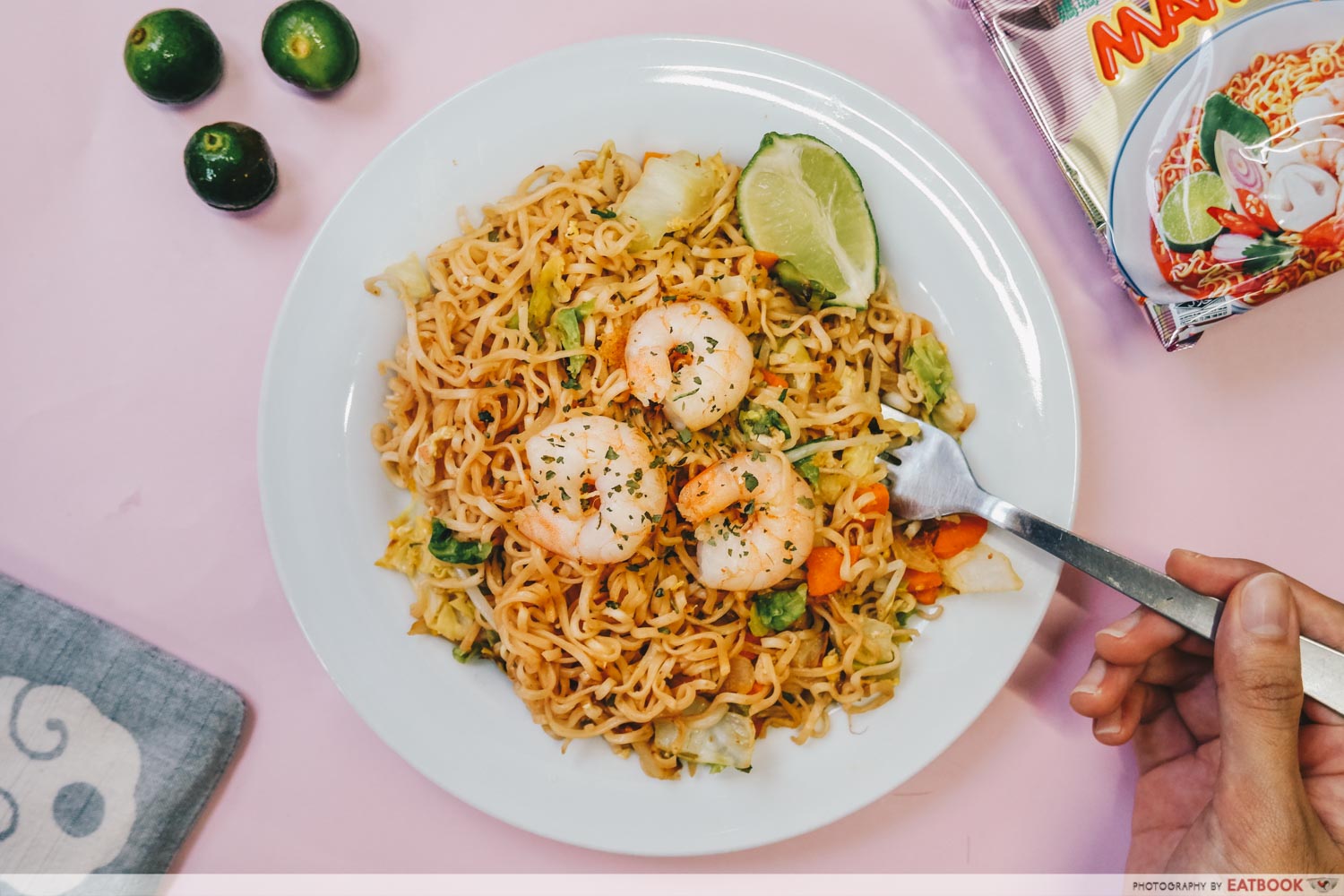 This ‘Pad MAMA’, or Pad Thai, is one that you can commonly spot on the streets of Thailand, popular for its comforting flavours as well as its easy preparation. The dish derives its name from the well-known Thai instant noodles brand ‘MAMA’, which be easily found at FairPrice or Cold Storage stores. 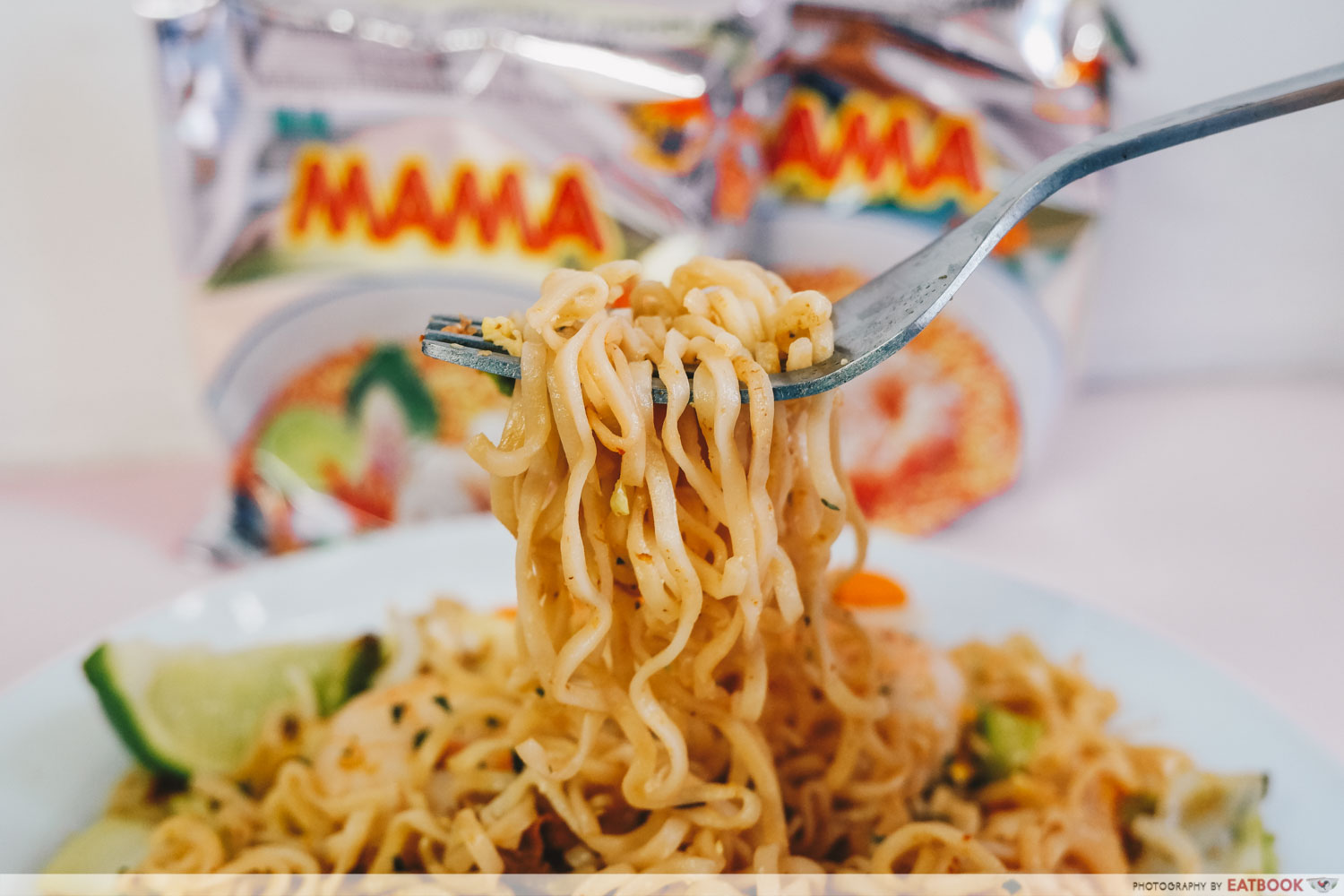 Our effort to emulate the instant noodle pad Thai involves adding vegetables to give the plate more colour and texture. Like all of our instant noodle recipes, you can always add or take away some ingredients according to what you like, and throw in meat or seafood to upgrade it even more! 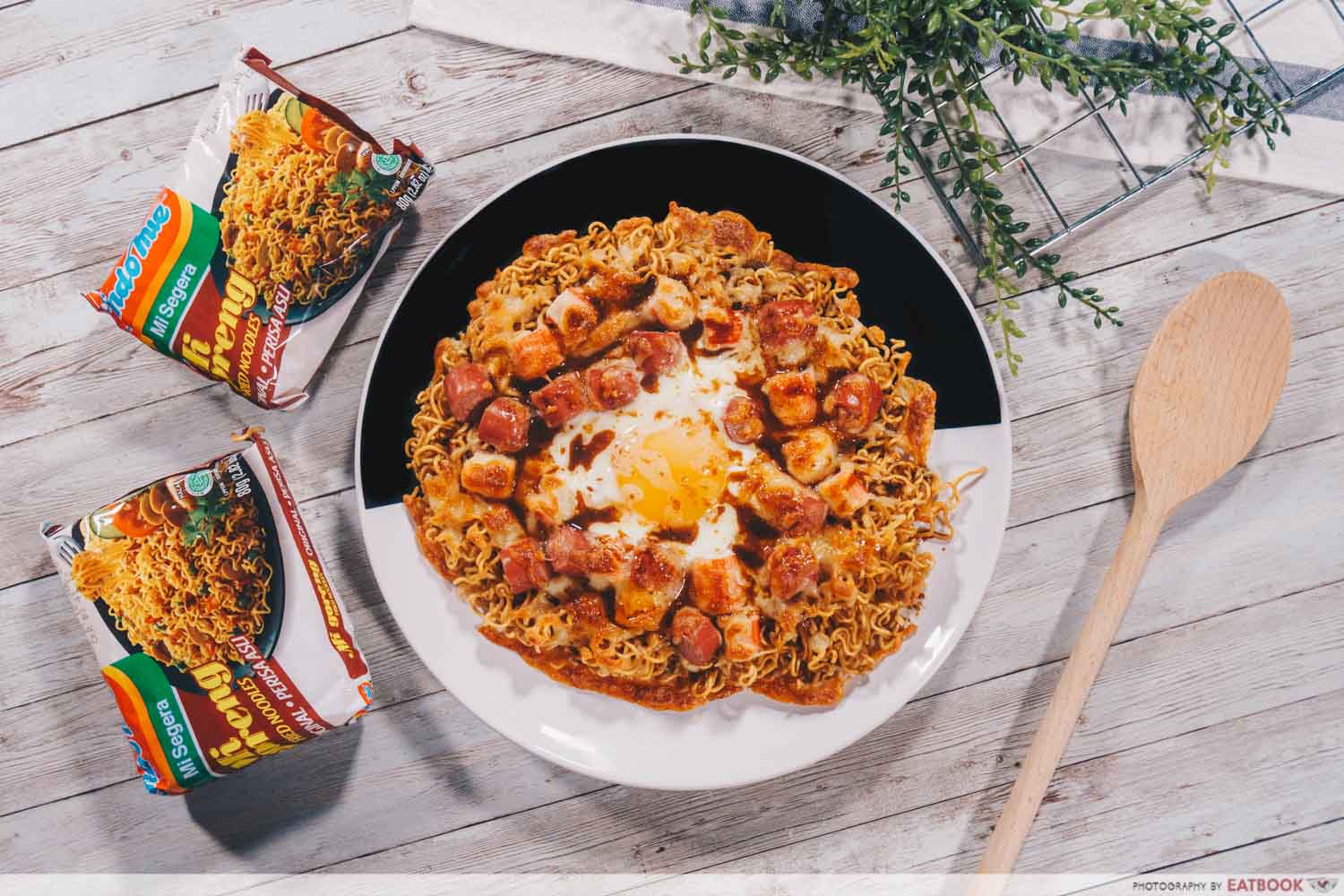 This Indomie Pizza is one way to put your stash of Indomie packets to good use. Purists might view this creation as a disgrace to the name of Indomie. But there’s really nothing to hate about enjoying the familiar flavours of the instant noodle in the form of another well-loved dish—pizza. 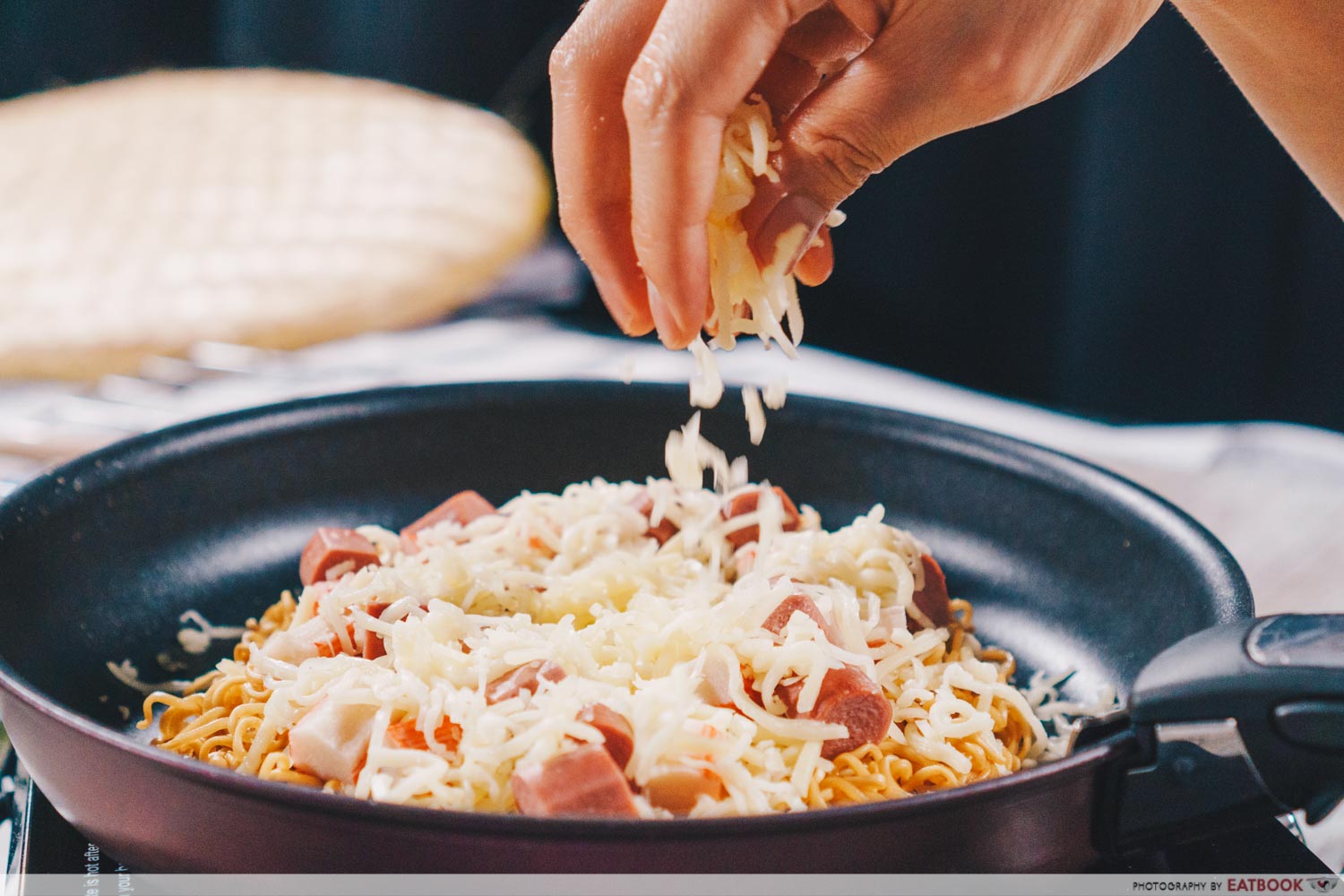 One essential step is letting the Indomie disc crisp up on the skillet, so it can form a crunchy crust and hold the pizza toppings. Besides hot dogs and crab meat, you can also throw in vegetables, mushrooms, or even pepperoni slices to customise your pizza. 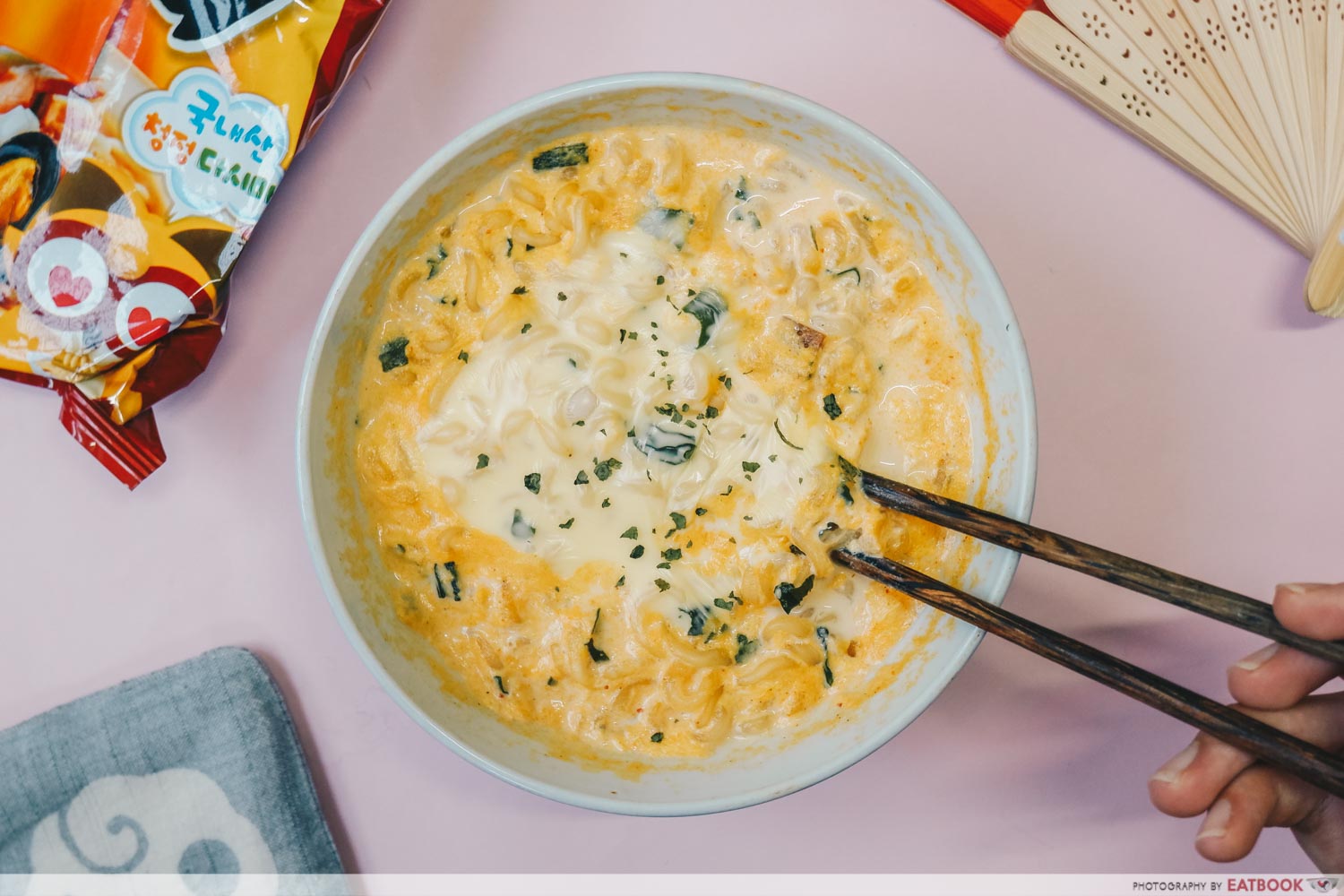 Topping instant noodles with a slice of cheese is nothing new, but cooking your spicy noodles in milk is not the usual thing to do with a packet of ramen. As abominable as it seems, the Spicy Cheesy Milk Ramen maintains a delicate balance of spiciness and richness as the heat of the broth cuts through the heaviness of the dairy. 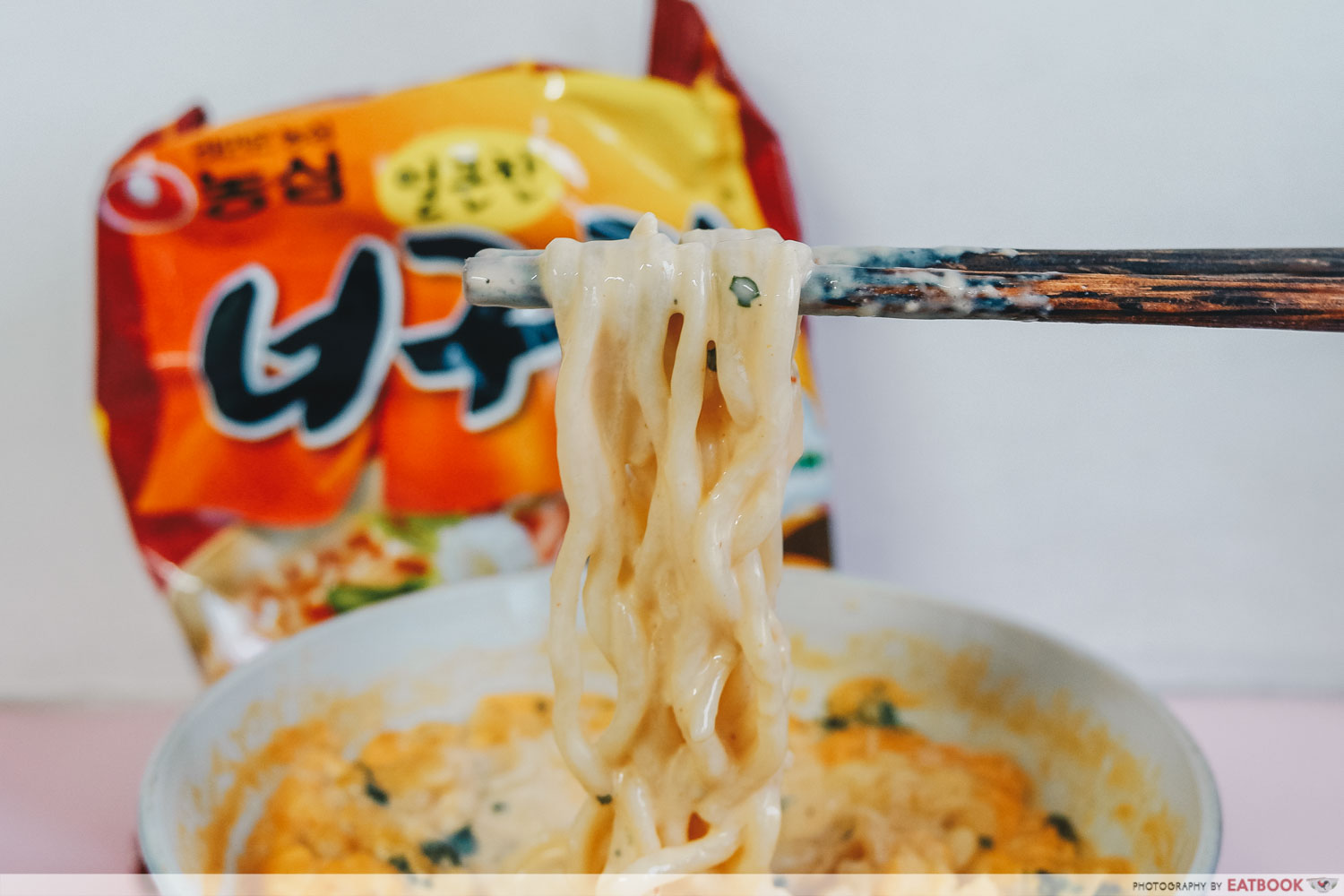 If you prefer your spicy cheesy milk ramen to be less salty, cut back on the amount of seasoning you add in but keep in mind that the additional milk will mellow out the savouriness quite a bit. Instead of having fried rice, try this Fried Sesame Noodles instead. The style and presentation of this dish might seem very reminiscent of the classic mee goreng but flavour-wise, these fried noodles have a fragrant sesame aroma instead of the sweet scent of kecap manis. 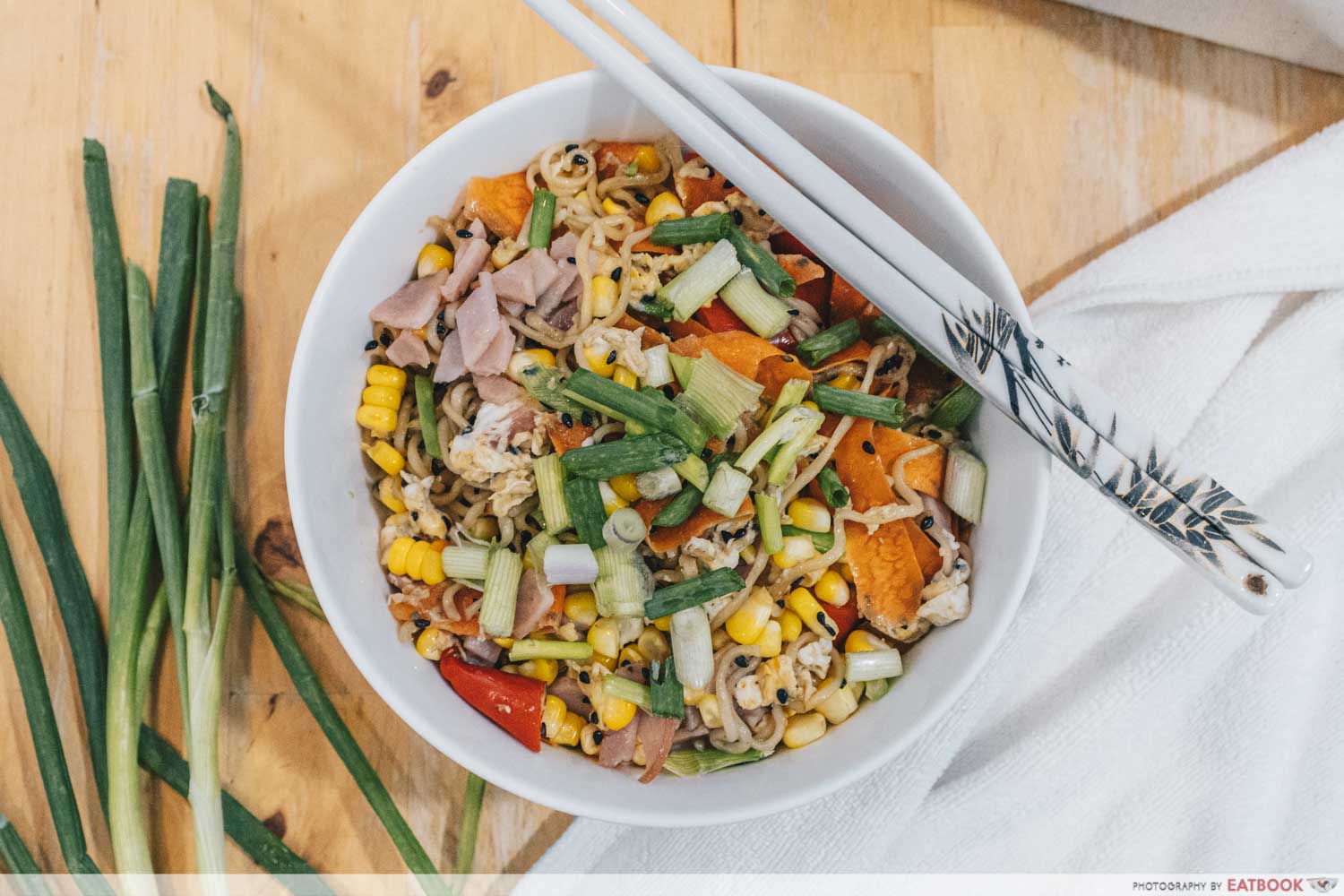 The recipe can be recreated in a single pan, and you can choose to cook up as many servings as you like in one go. As with many of our other instant noodle recipes in this list, you can choose to include a variety of ingredients based on your preferences and what you have at home. 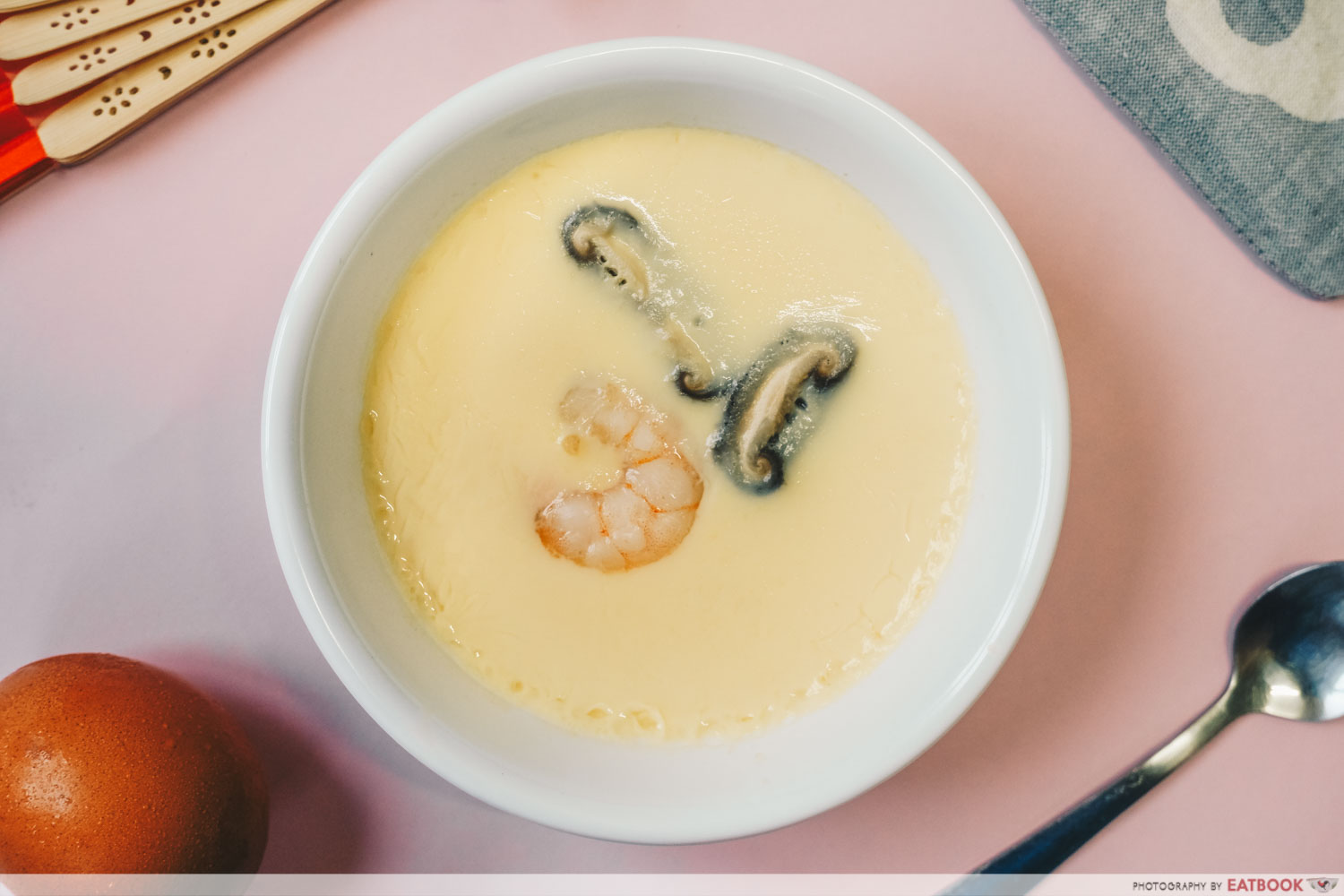 This Instant Chawanmushi will make sure that none of the savoury instant noodles broth will go to waste. After finishing up the noodles, toss in a beaten egg and a few simple ingredients to recreate your very own steamed egg side dish. 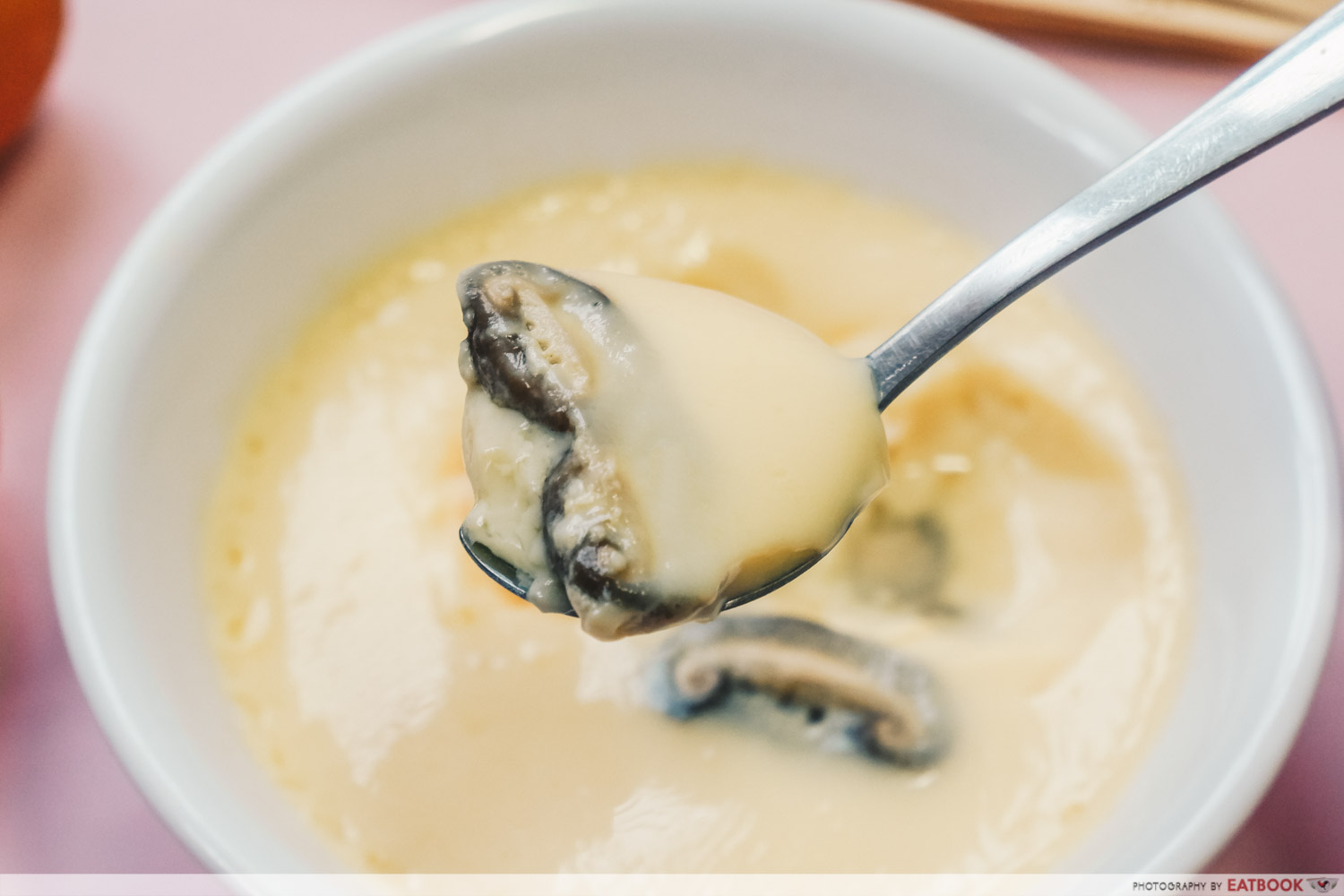 Traditionally, chawanmushi uses a combination of kombu and katsuobushi stock as its base. But if you can’t get your hands on those thanks to the Circuit Breaker, this versatile dish can also be recreated with any kind of soup base, including chicken stock or your leftover tom yum soup. The instant chawanmushi can be cooked in the microwave, but if you want an extra silky texture, you can steam it in a pot for 10 minutes.

As life outside comes to a partial standstill, cooking has become one of the many ways to stay active and motivated at home. We hope that these instant noodle recipes will not only give you new ways to upgrade your stay-home meals, but also act as an introductory course to home cooking!

If you are looking for more easy recipes to whip up at home, give our one-pot Samyang Mac & Cheese recipe a try, or make yourself some dessert with this watermelon soju jelly recipe. 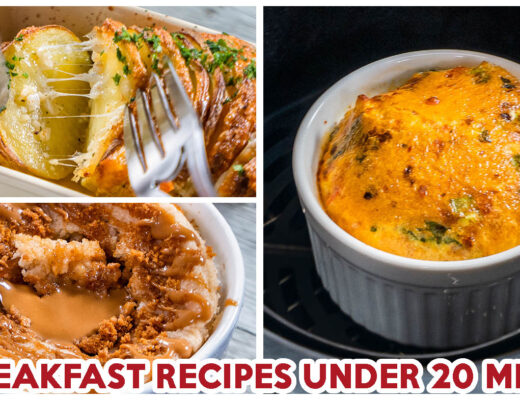 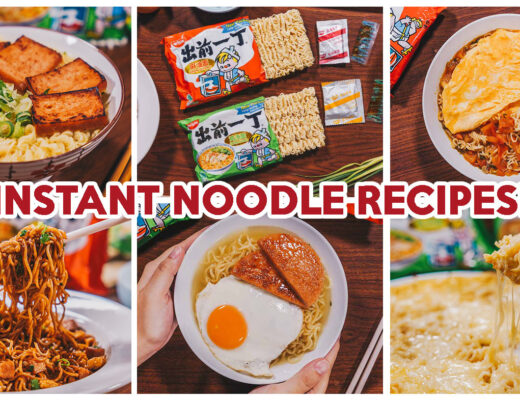 5 Ways To Zhng Up Your Instant Noodles With Just Luncheon Meat, Tomatoes, Scallions, Eggs And Cheese