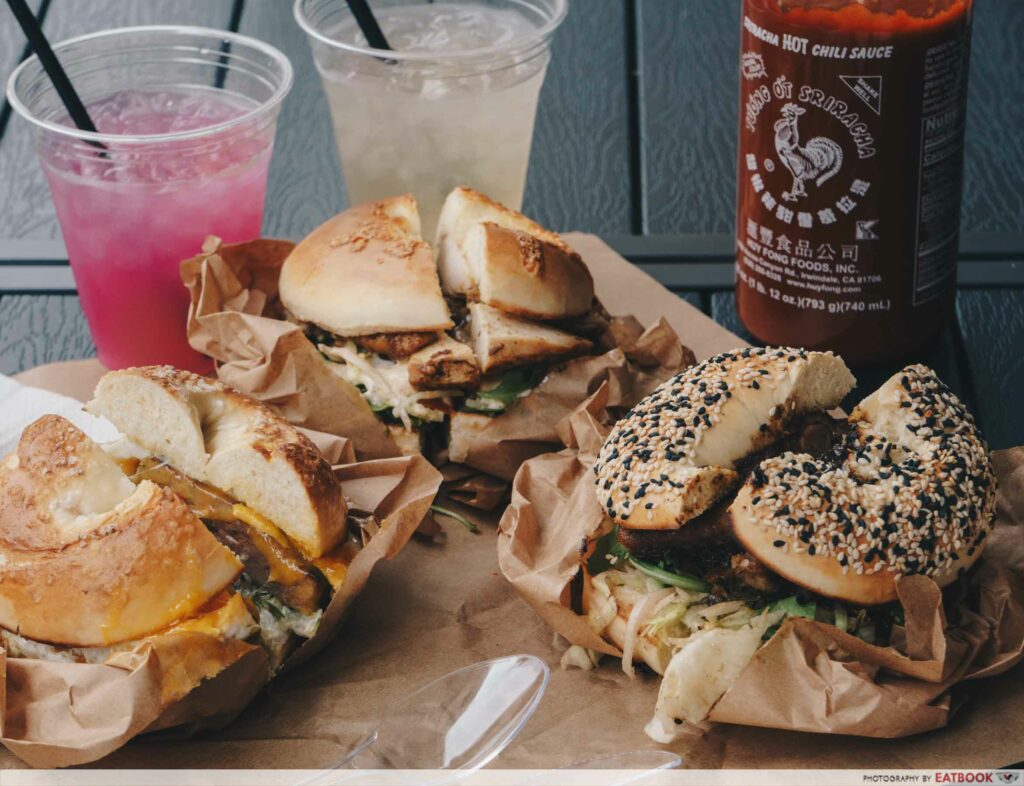 We are no stranger to Two Men Bagel House, which opened in Tanjong Pagar four years ago. One of the few places in Singapore that pushes out hand-rolled bagels, the speciality bagel store has many foodies swearing by their doughy goods. Fast forward to today, the bagel house has launched their second outlet at Royal Square in Novena. At Two Men Bagel House 2.0, you can expect a completely different menu featuring smoked meat bagel sandwiches. 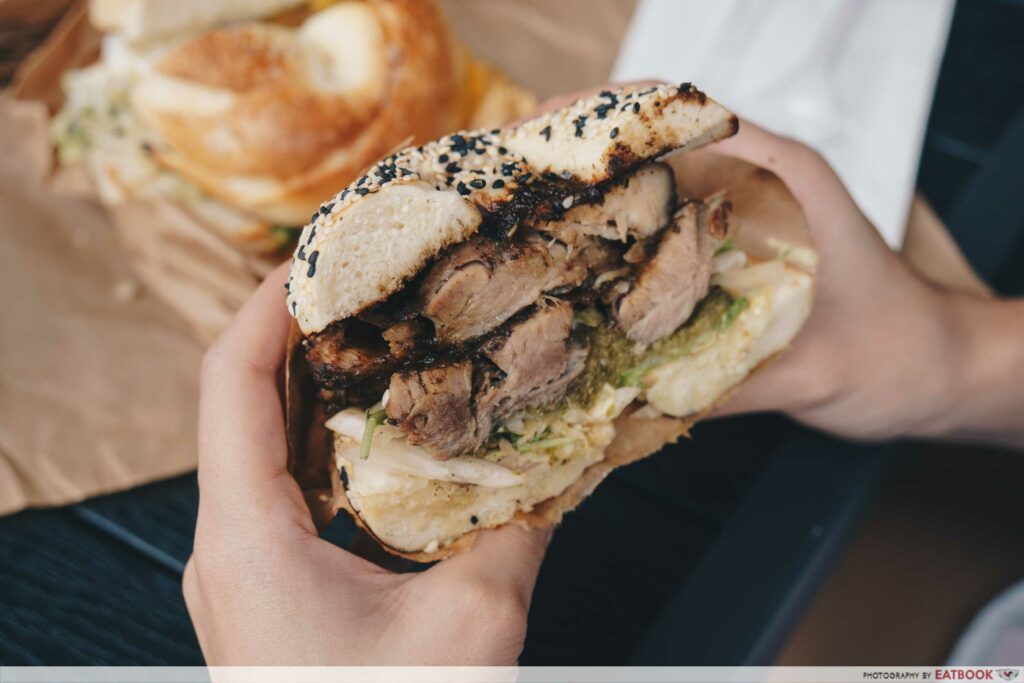 We went there a little after lunchtime and were told that their famous multigrain bagel was already sold out. As such, we settled for their seeded bagel to go with The Ribs ($14). Smoked for a few hours, the huge slab of spiced meat was extremely moist.

I liked how the accompanying brown BBQ sauce was more savoury than sweet, unlike the usual sticky red BBQ sauce you see slathered on American baby back ribs. The seeded bagel added a nice crunch too, but if you’re one who doesn’t like sesame seeds on your buns, I suggest you choose another bagel instead. 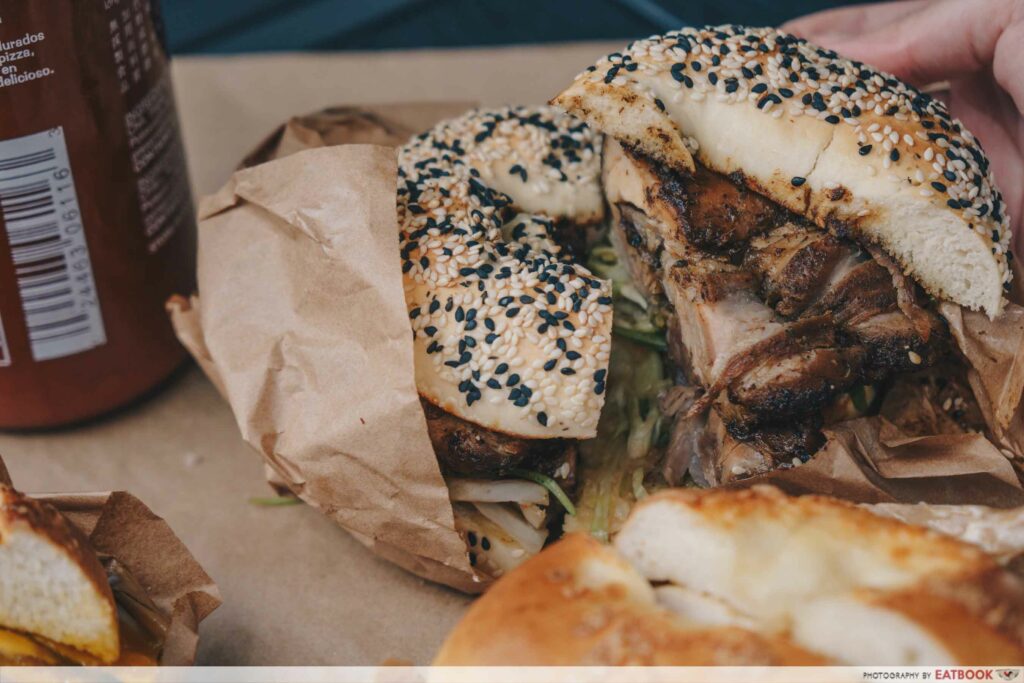 Previously, Two Men Bagel House 2.0 had another ribs bagel sandwich on the menu – Sticky BBQ Ribs, which came with roasted pineapples and red cabbage. However, customers commented that it was too jelak, so they came up with this version instead. All the meats here are smoked with a blend of hickory and apple wood. But the smoky aroma was most apparent in the Bird ($12). Even though this bagel sandwich looked rather run-of-the-mill, with plain white chicken juxtaposed against tomatoes and greens, it was our favourite. 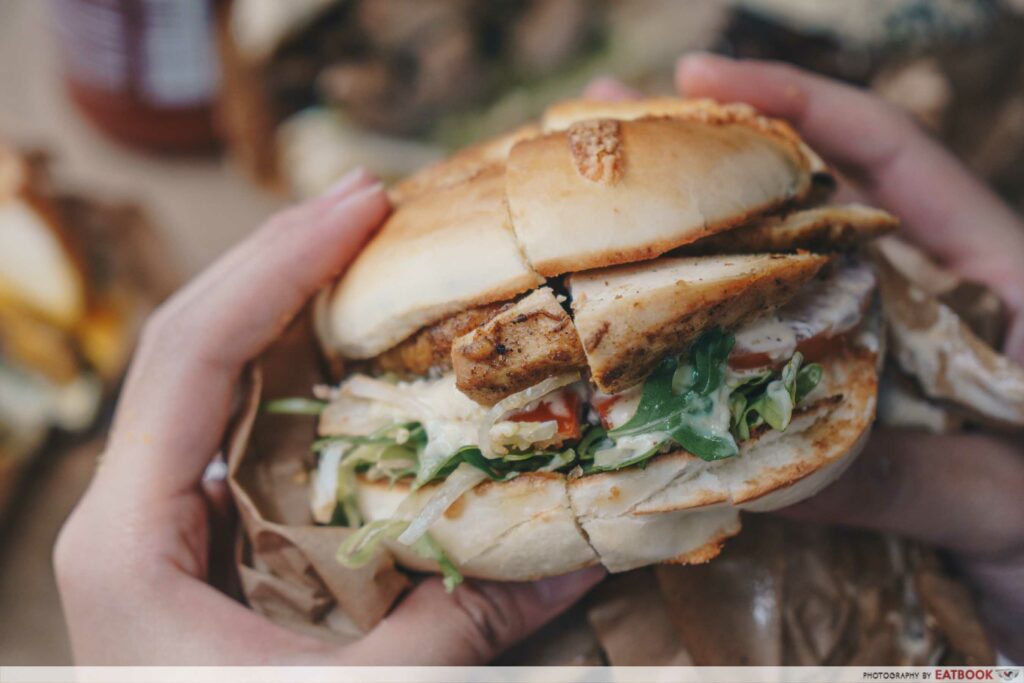 Marinated in Moroccan spice, the tender chicken leg managed to capture the bacon flavour of the hickory smoking wood. I appreciated how the smokiness wasn’t too robust, such that you can still taste the flavours of the other ingredients.

Everything at Two Men Bagel House 2.0 is made in-house including the sauces, and the accompanying smoked aioli provided a touch of creaminess to the sandwich. 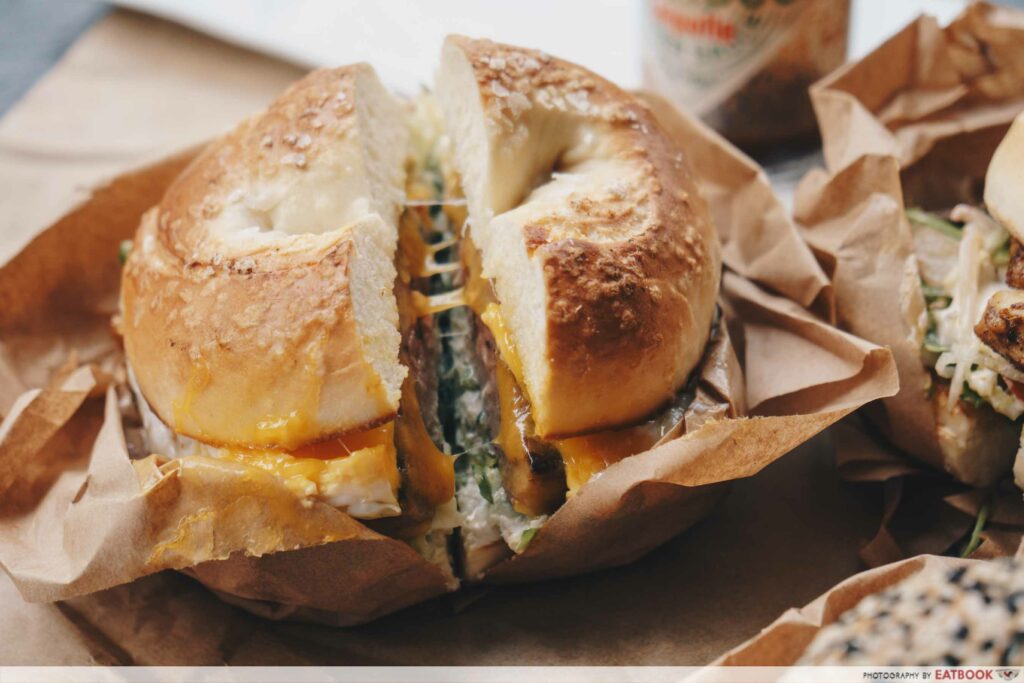 Trusting netizens and their reviews of Kuzu ($10), we decided to give the lamb patty bagel a go. A breakfast bagel, the patty featured a sunny side up that had a runny centre. Unfortunately, the flavour of the lamb patty was rather intense. The complementing tzatziki sauce could perhaps have been punchier to mask the gamey pungency. The patty was more sausage-like than a ground meat patty too. It might have been intentional since it’s a breakfast dish, but this would have fared better if the patty was less one-dimensional, with more texture. 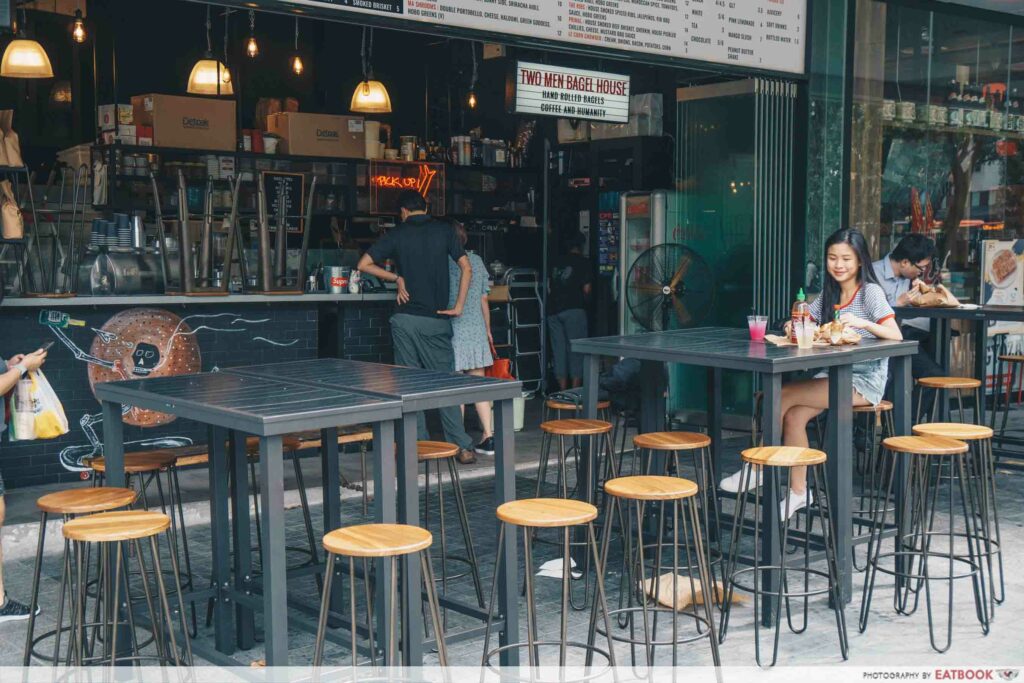 Situated on the first floor of Royal Square, Two Men Bagel House 2.0 only has an al fresco seating area with high chairs and tables. Seats are minimal, and the space can only accommodate around 20-odd people. That being said, it is more of a grab-and-go concept, with all their bagels being packaged in brown food wrapping paper, even if you opt to dine in. Service was excellent, and the counter staff members were really chirpy and willing to give us advice on which bagels to order. 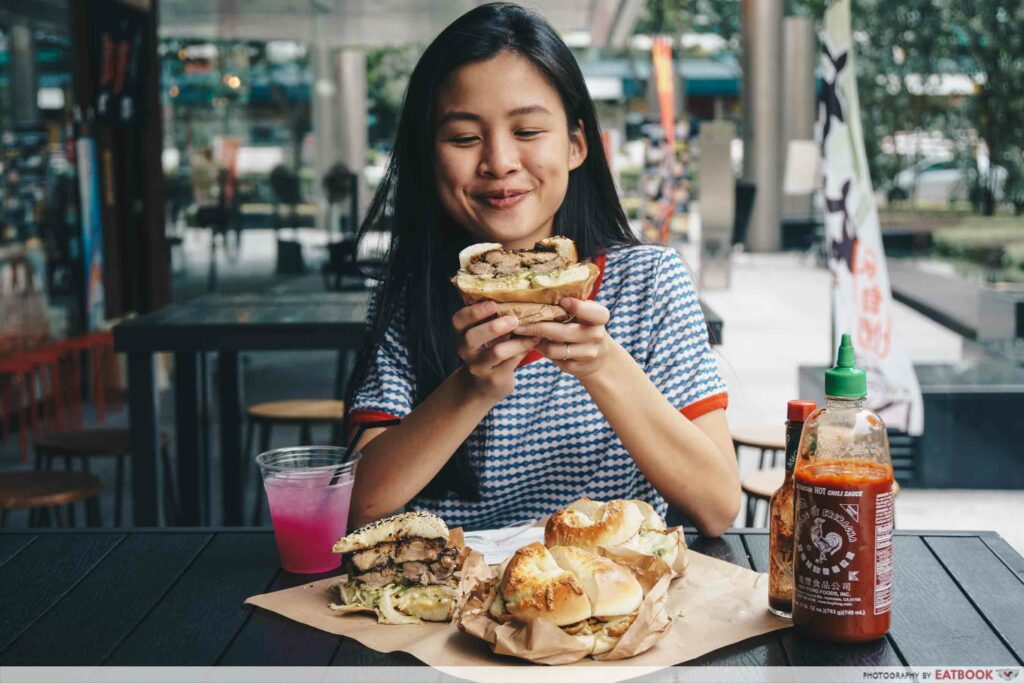 I’ve tried bagels from Starbucks and Schmear at Quayside Isle, and I would say that Two Men Bagel House 2.0 is one of the better bagel houses in town. I really love how their bagels are chewy and not stale at all. Together with their smoked meat, the bagel sandwiches here are top-notch and make for a really satisfying meal.

If you’re more of a burger person, check out Three Buns or Seven & Ate‘s pork burgers instead!

Photos taken by Clement Lee.
This is an independent review by Eatbook. 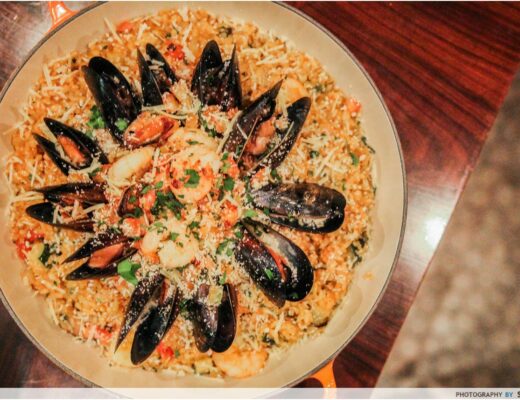 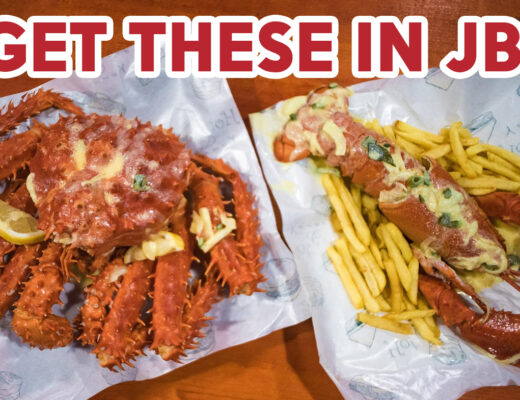