Connect 71 serves both looks and taste 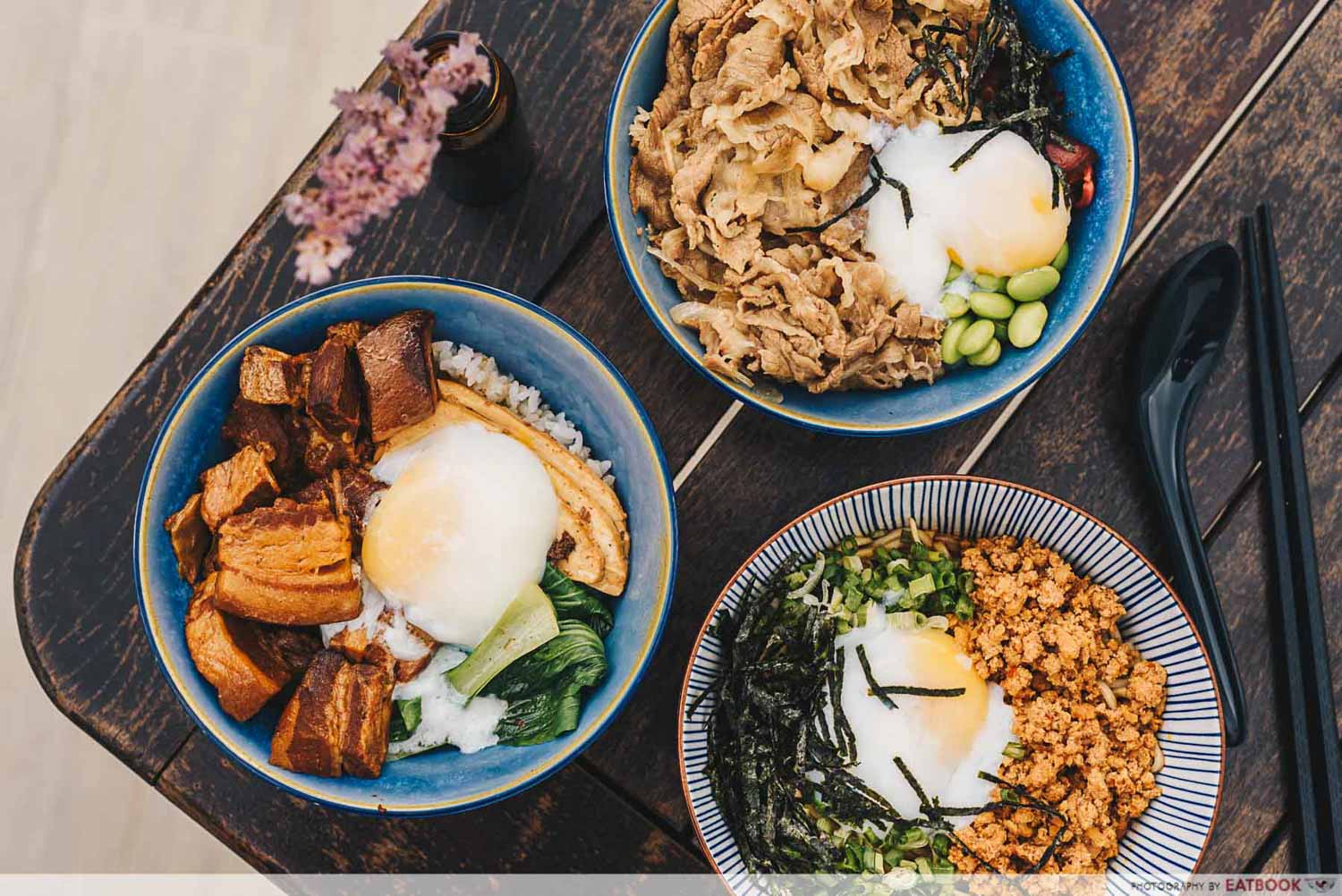 Hidden in the far west of Singapore, Nanyang Technological University (NTU) is known by several names, such as “Pulau NTU” and “Concentration Camp”; “Food Paradise” is definitely not one of them. Despite the fact that canteens are scattered across the campus for a wide variety of food choices, the university does not entice foodies to travel to the end of the country for a meal.

Even on campus, students and staff opt for the nearest canteen or food stall within walking distance. Convenience and social activity are the main priorities.

The exception to the rule is Connect 71 (C71). After all, the cafe was started by students themselves. The co-founders of C71, Chong Qing and Raymond, are current final-year Economics students and are well aware of what students value. The cafe serves aesthetic modern-Japanese rice bowls and boasts a spacious dining area located in a central location for students to feast and connect. 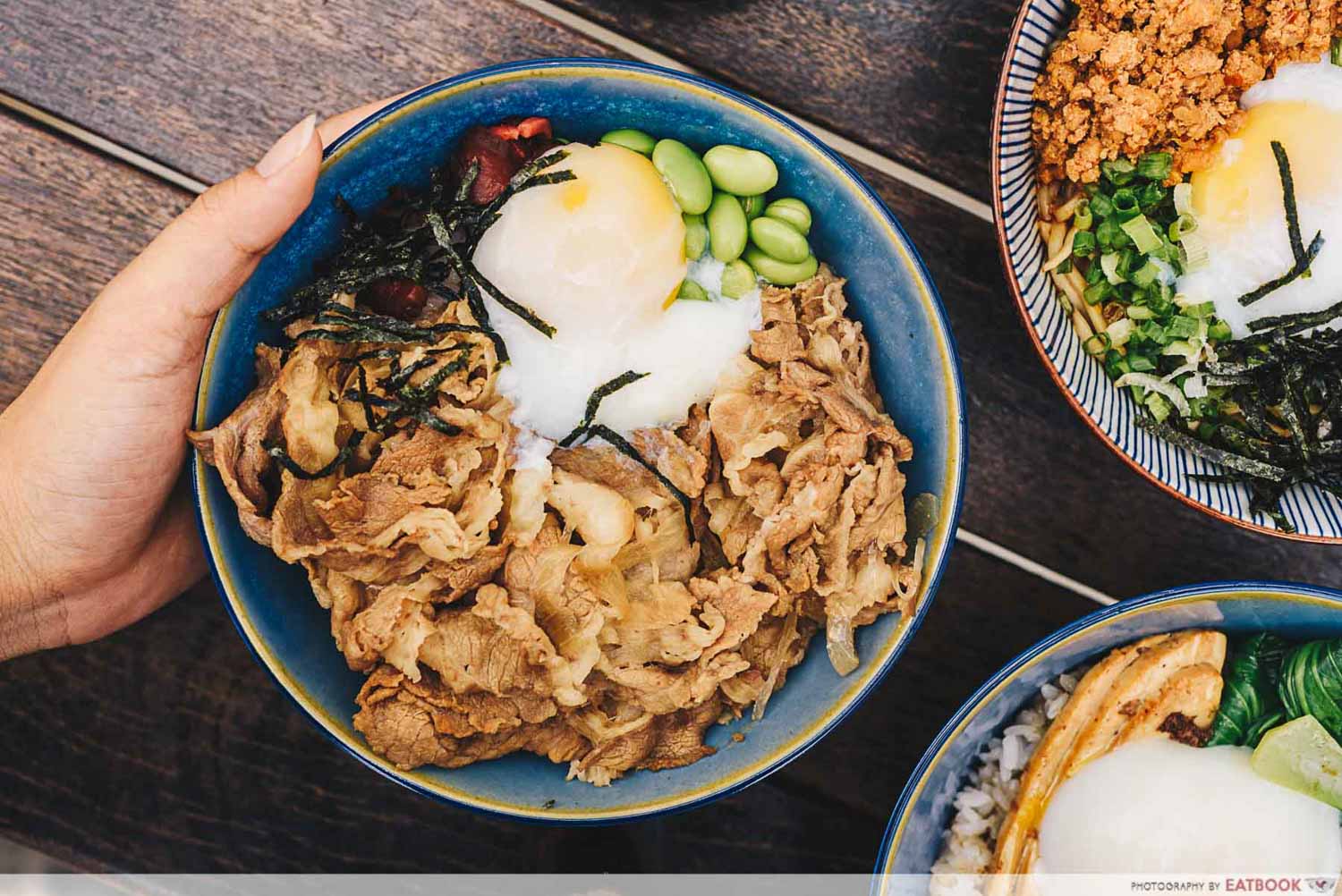 We started our meal with their best-seller, the Gyudon ($9). This dish is so popular that it runs out before dinner on some days. The dish features a bowl of Japanese short-grain rice topped with a generous amount of simmered beef and onion slices, an onsen egg, edamame, strips of nori, and pickled ginger. 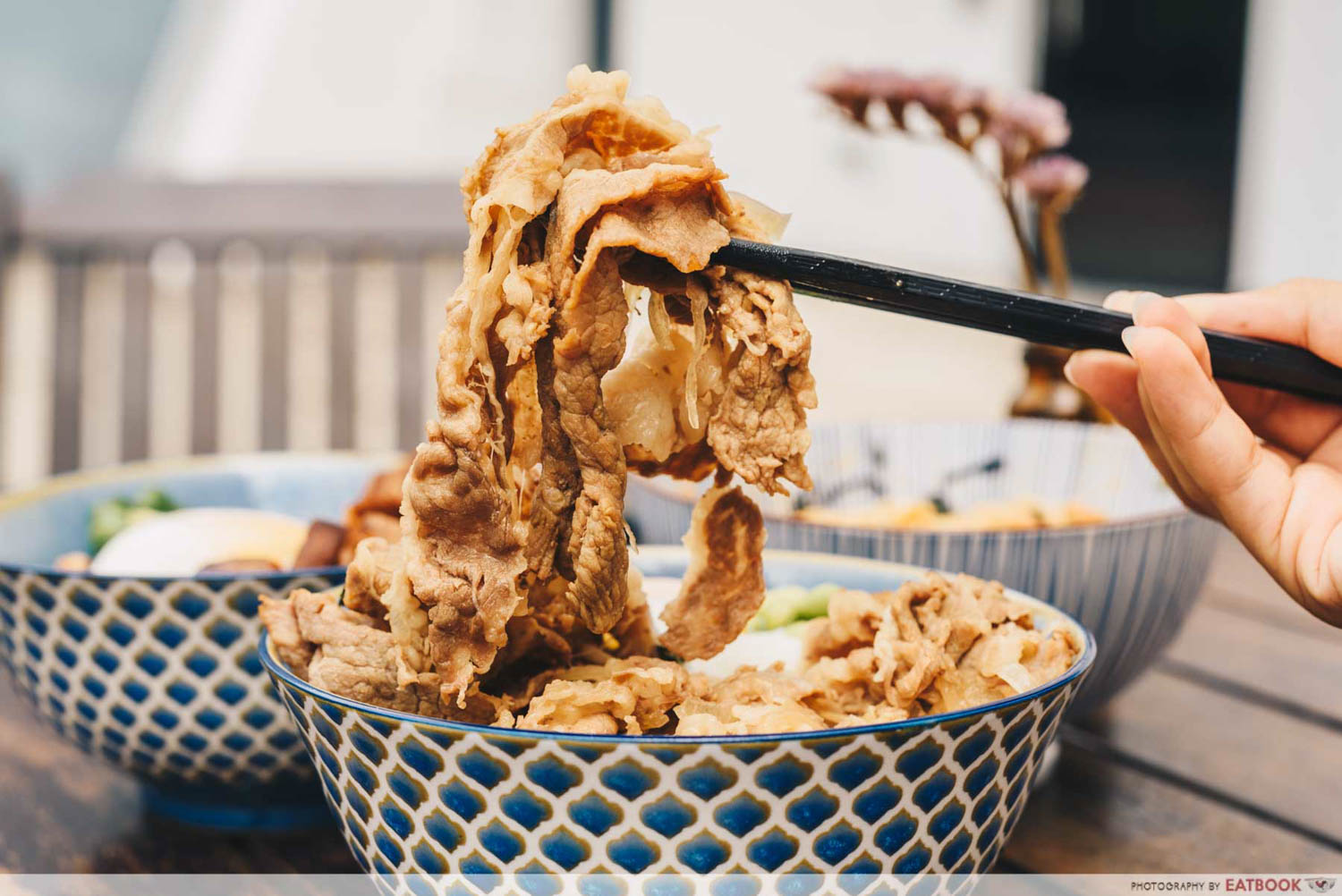 What was outstanding about this dish was undeniably the meat. I could see why customers opt for this despite it being the most expensive item on the menu. With a great meat-to-fat ratio, the beef strips weren’t overly chewy. The best part was that every sinew carried a deep umami flavour, and this was elevated by the sweetness from the onions.

Chong Qing said that they prepared the strips of beef ‘shabu-shabu’ style, and then allowed them to rest in the broth for the flavours to be completely absorbed. This process helped the meat obtain that lovely tenderness 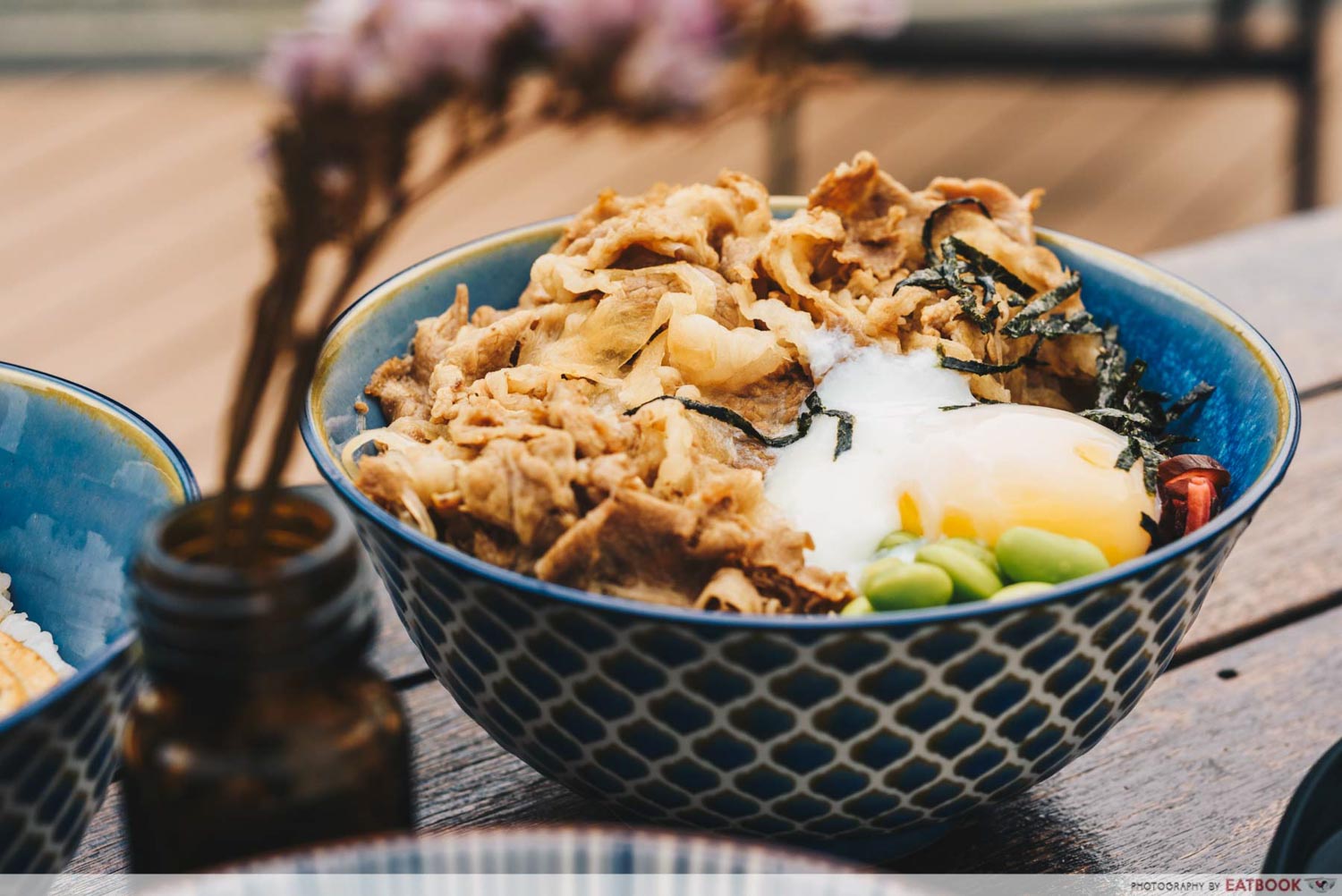 Every dish in the Bowls section of the menu comes with an onsen egg. I suppose this was mainly to cater to youths who want that egg-breaking IG shot, so I was sceptical whether an egg was absolutely necessary in all the dishes.

Fortunately, the egg was a fantastic addition to the thin strips of beef. Given that not much oil was used in the cooking process, the beef strips dried out as soon as they cooled down. The egg restored that loss of moisture and gave a luxurious mouthfeel as we wolfed down the strips of meat. The condiments added colour and slight textural interest but nothing more. The pickled radish had a bright red hue that stood out prettily against the other ingredients, but it lacked the punchy, sweet and briny flavour that I always look forward to in Japanese pickles.

If only they were served in more generous amounts, the edamame and nori flakes could have done more to enhance the texture and overall flavour of the dish. 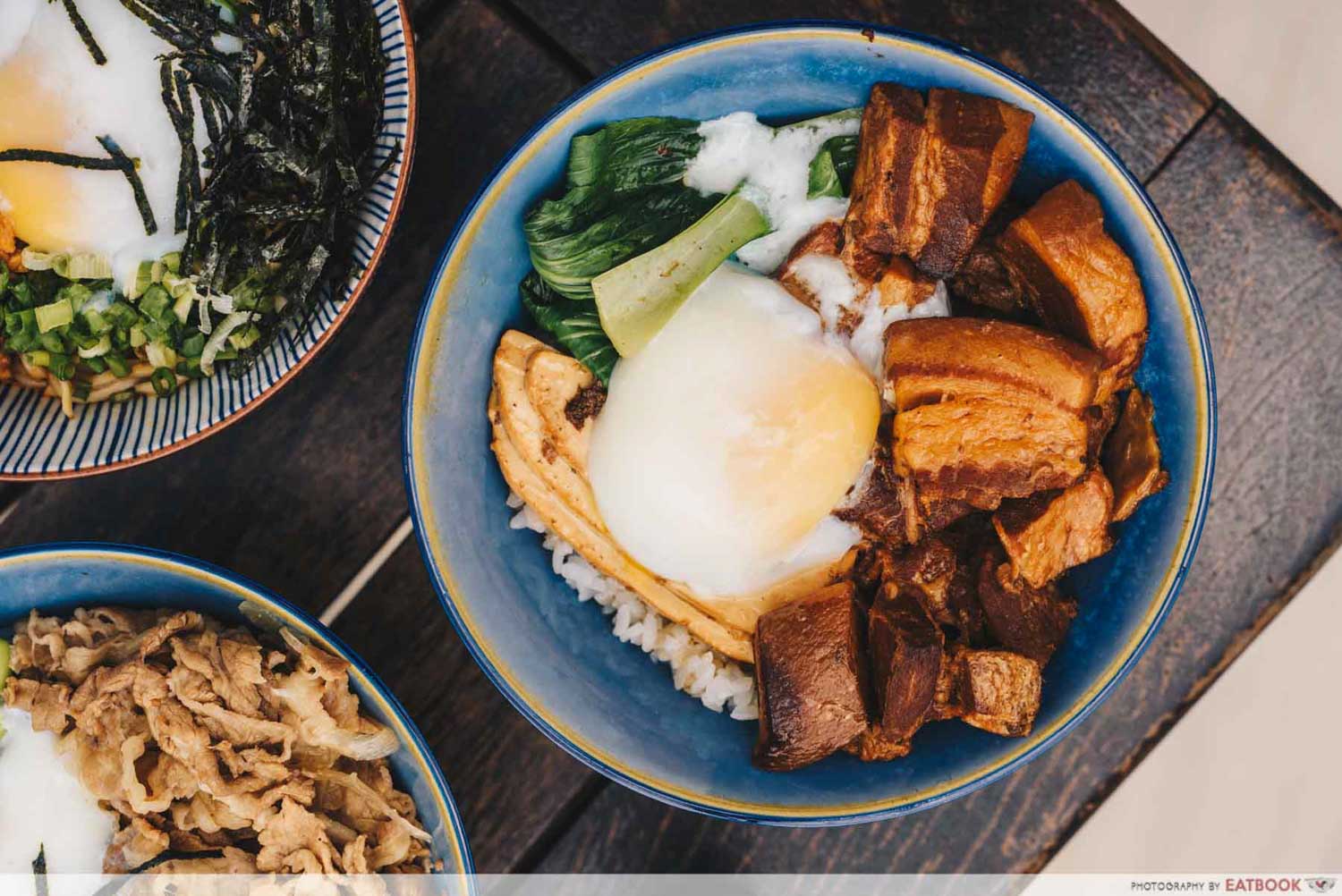 Our second pick, the Lor Bak Bowl ($8), was another popular dish. Thick cuts of braised pork belly are served alongside marinated slices of firm tofu, blanched bok choy, and an onsen egg. 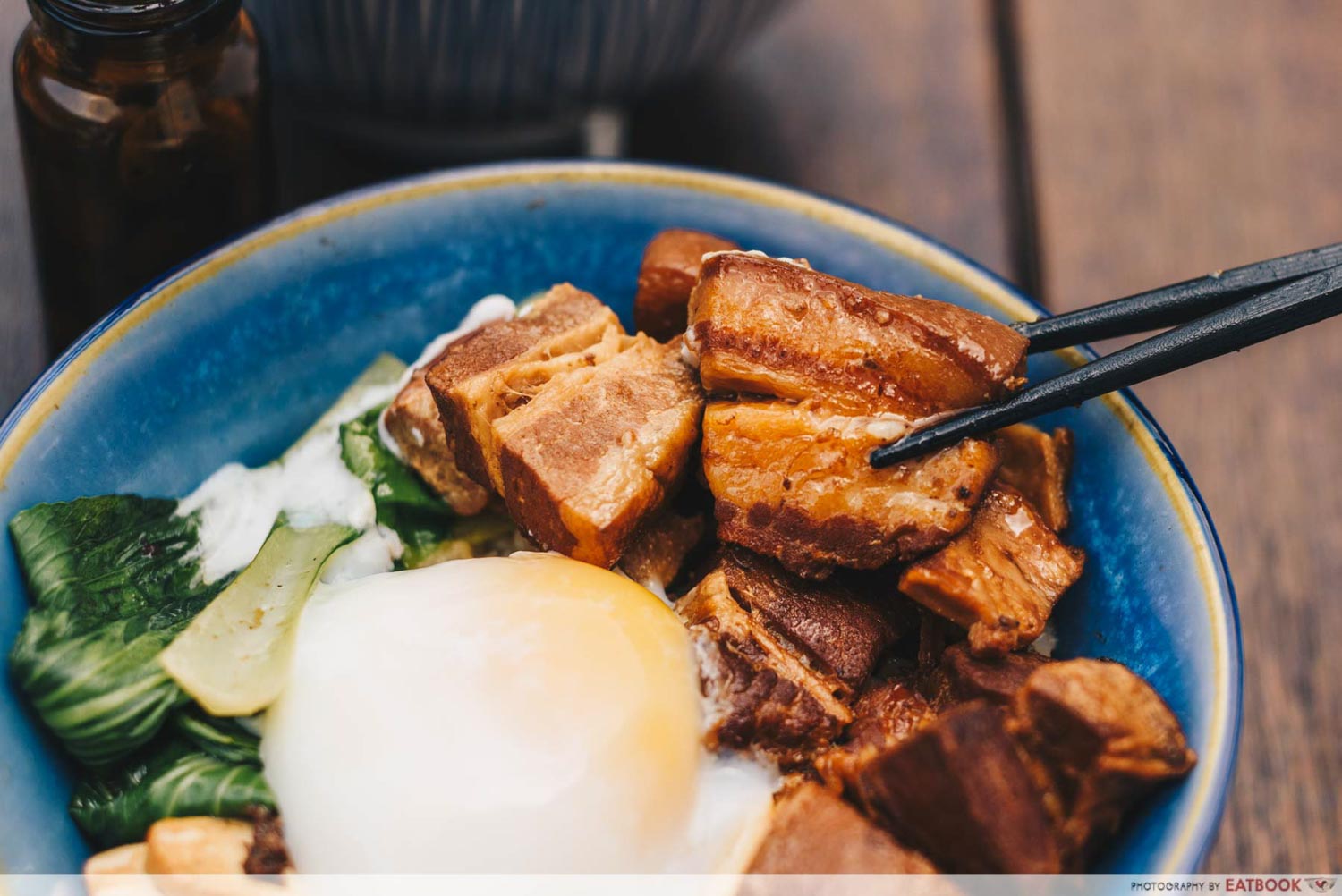 The juicy, glistening pieces of pork belly looked so mouth-watering that we couldn’t resist  attacking it the moment the bowl was placed in front of us. We didn’t even break in the onsen egg and mix the bowl up first—and I’m glad we didn’t. 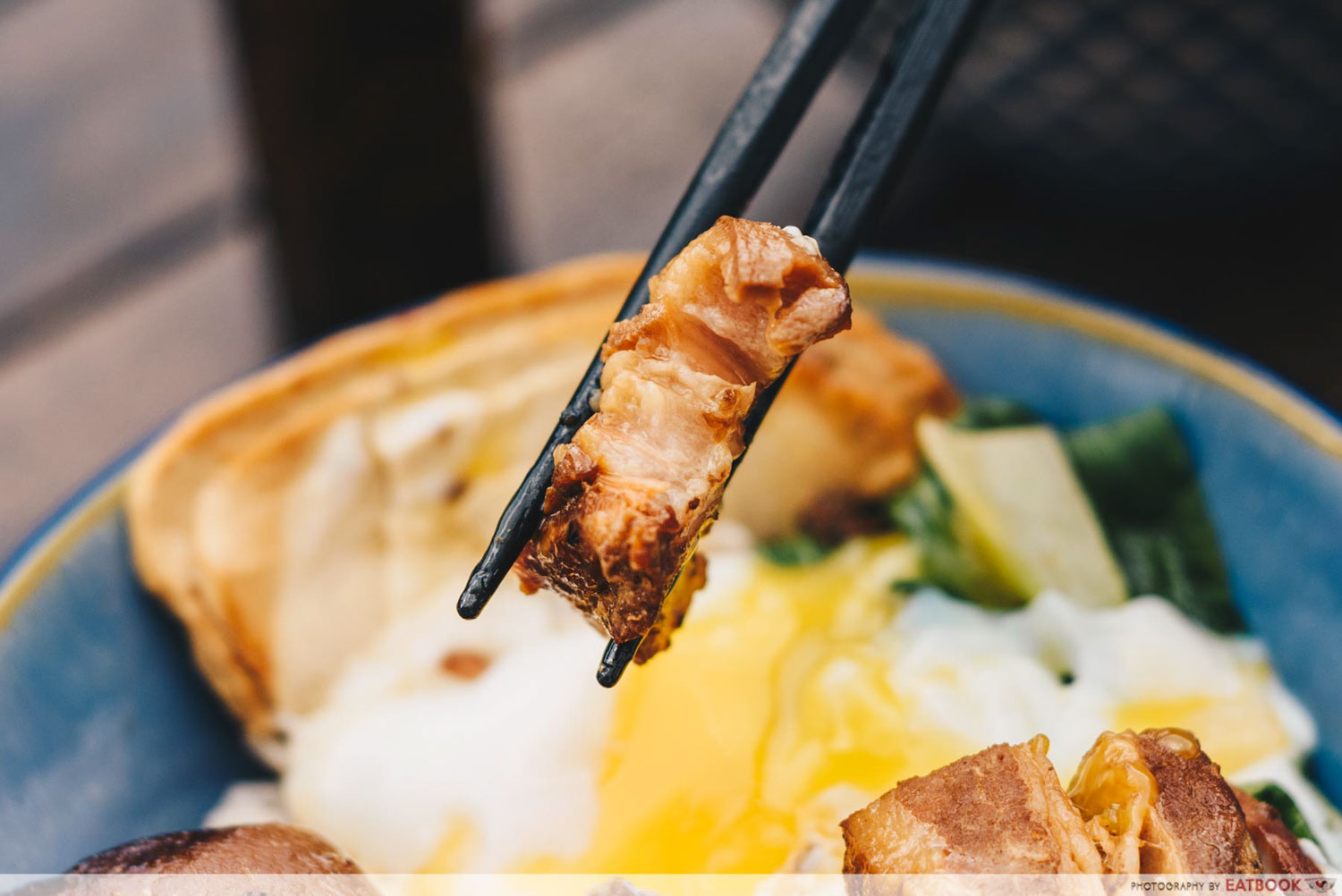 The fatty meat literally melted in our mouths, needing no support from the onsen egg for moisture. The pork belly is cooked on low heat for 12 hours, which helps break down the fat cells to achieve that melt-in-your-mouth texture and optimal flavour.

That being said, we felt that the pork belly was still slightly lacking on the flavour side. Compared to the cheaper lu rou sold at economic rice stalls, the flavour of the pork belly here had less punch from the five-spice. I’m not so sure if I would pay more for this dish when I can find a cheaper option at the nearby NTU canteen’s cai fan stall. 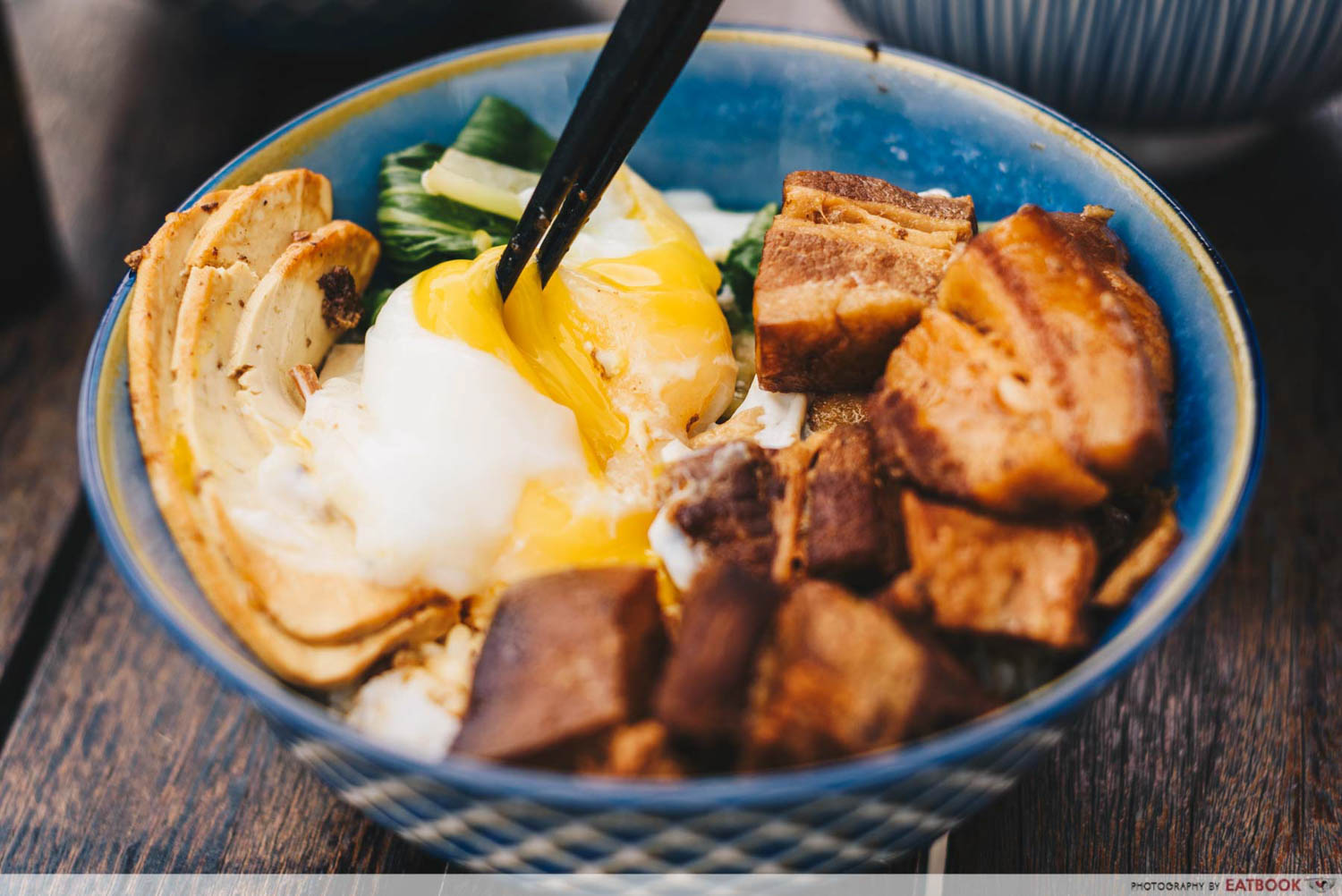 Like the gyudon, there was an onsen egg for us to mix in with the rice and meat. Unfortunately, it wasn’t as complementary to the pork belly as it was to the meat in our first dish. Instead, the yolk muted the spiced flavour of the pork belly. 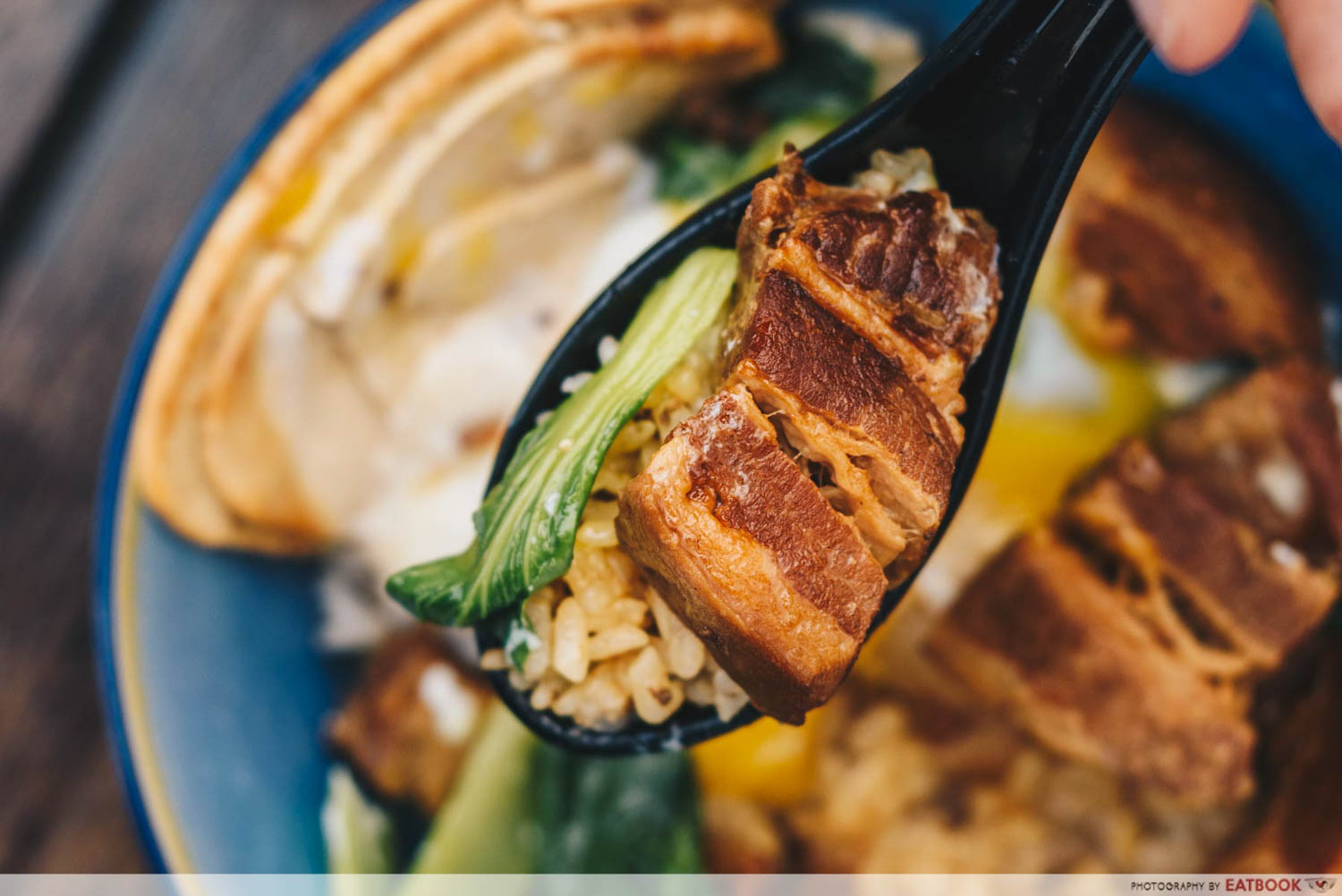 I want to give a special mention to the rice. I’ve eaten many Japanese rice bowls in the past, and being left with a heap of cold, overly-chewy or overly-mushy rice is far too common an occurrence.

C71 cooked their rice with the same precision as they do with their meats and the result was a soft, pillowy bed of rice that absorbed the sauces and did not mush together into a dense ball of starch. 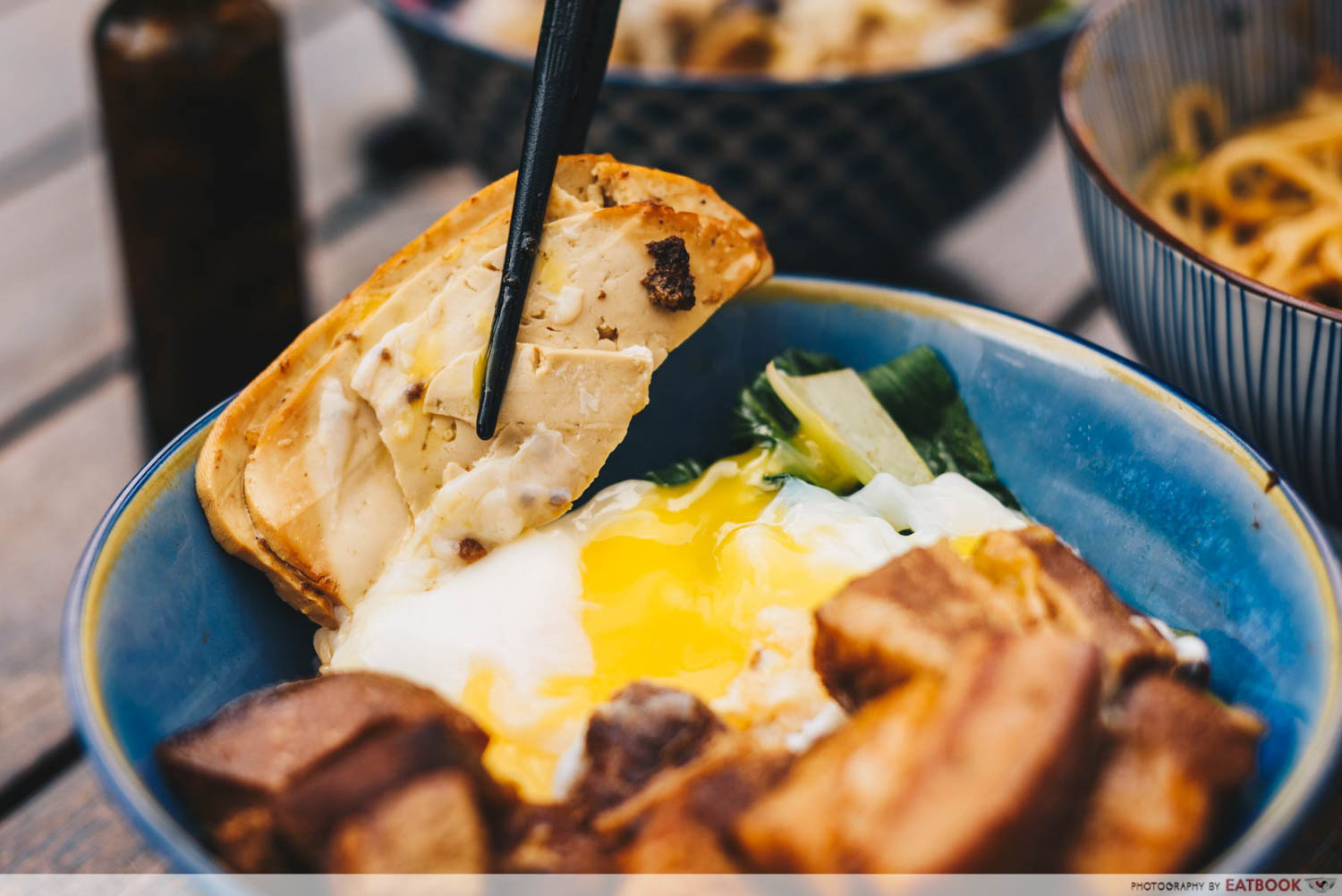 The thin slices of marinated firm tofu gave a pleasant variation in texture to the pork belly. But what I mostly tasted were the sour notes of plain tofu rather than the robust flavours of the marinade. Firm tofu runs the risk of being dry, and these few slices definitely fell into this trap. 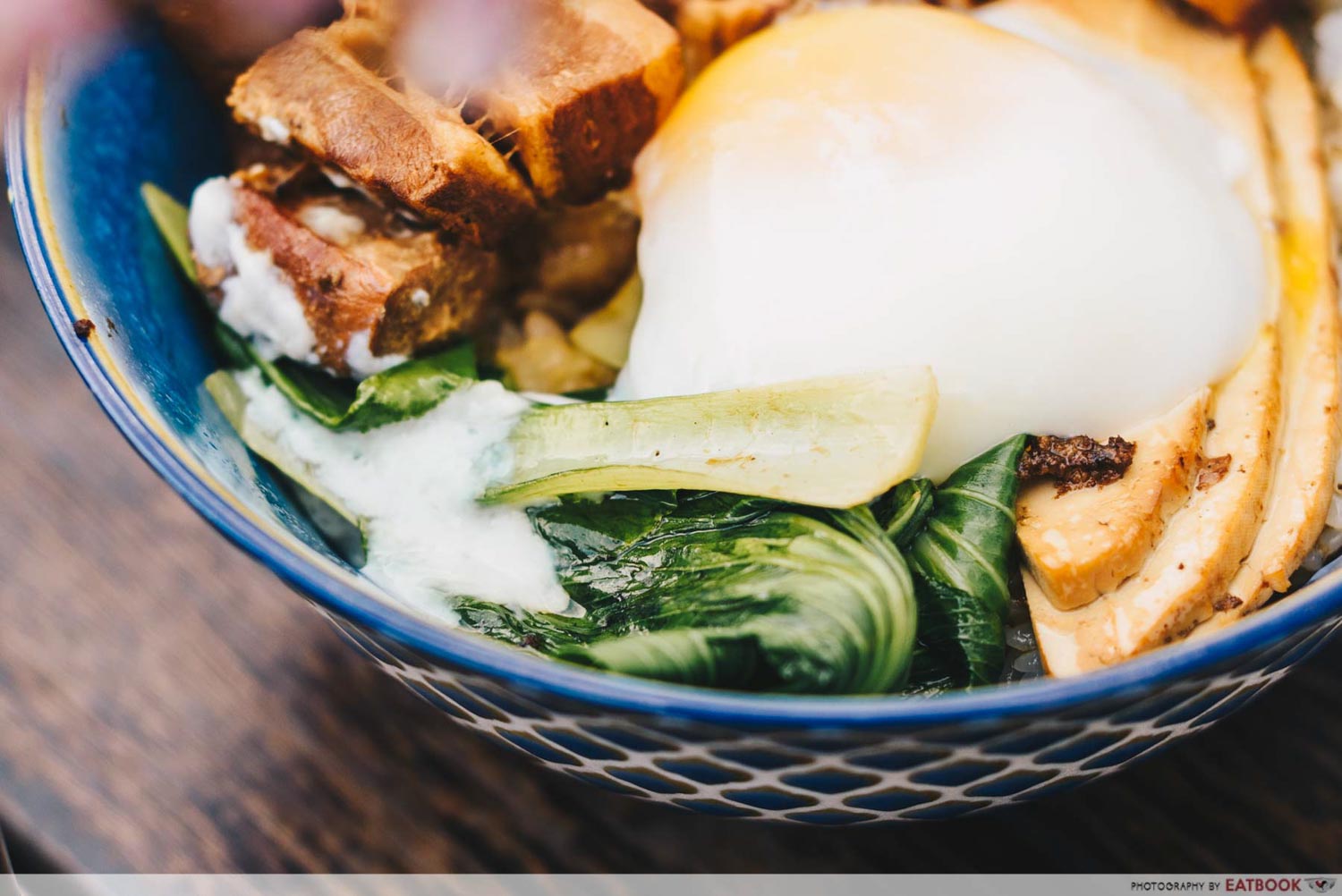 Blanched bok choy sounds plain to anybody, but it paired well with the pork and rice. It wasn’t overcooked so it retained some crunch and was a refreshing point of contrast that cut through the heavy flavours. Our last pick was the B.M.E Mazesoba ($7). Fresh Okinawa soba noodles rested in a pool of soy-based sauce and were topped with minced spiced pork, nori flakes, chives, spring onions, and an onsen egg.

Coined the “Japanese Bak Chor Mee”, we were excited to see how a Japanese version of the ubiquitous Singaporean delicacy would fare in our books. 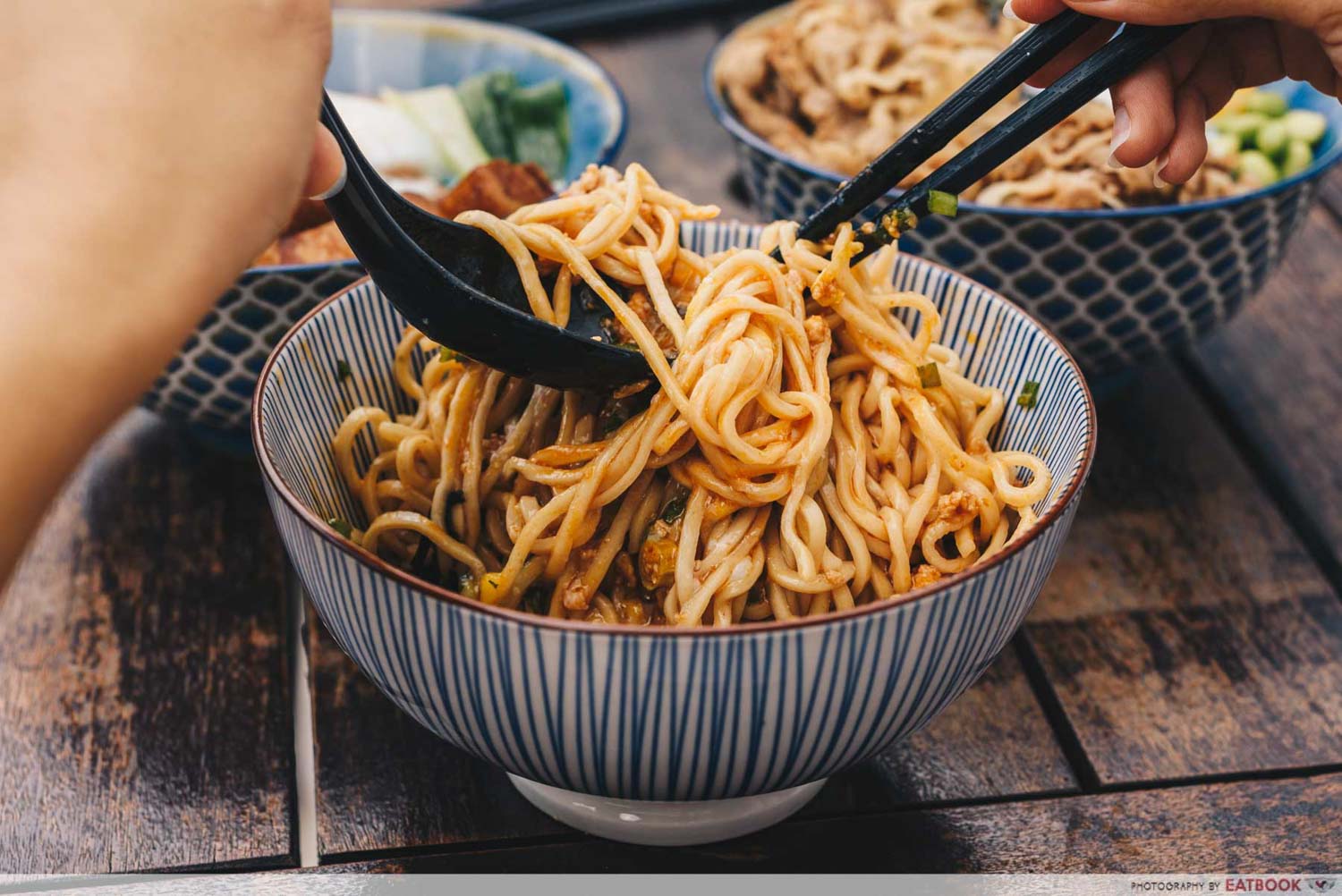 According to the menu, “B.M.E” stands for “Burst, Mix, Eat”. To get the most out of this dish, we had to burst the jiggly onsen egg and mix it into the noodles with all the other toppings. 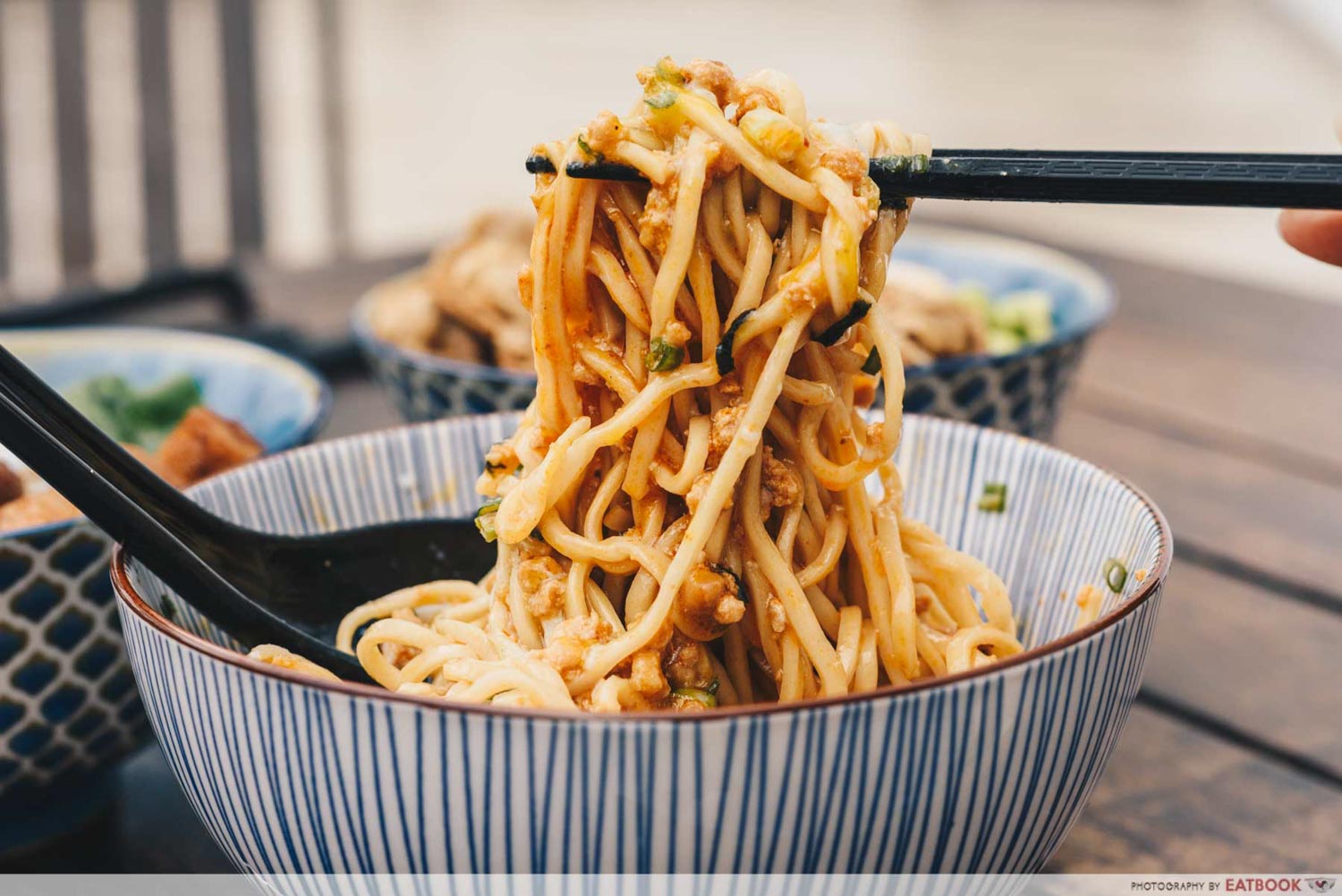 There was a soft but firm bite from the noodles, while the chewy bits of minced pork added a punch of spiciness. The chives and spring onion, combined with the yolk-enriched sauce, injected a full-bodied flavour in each mouthful.

But whether C71’s Mazesoba is like the well-loved bak chor mee is a topic for debate. We felt that it bore an uncanny resemblance to zha jiang mian rather than bak chor mee.

And like zha jiang mian, slurping up an entire bowl of noodles can be slightly challenging. After mixing the contents, the seasoning in each mouthful was homogenous and got slightly boring. 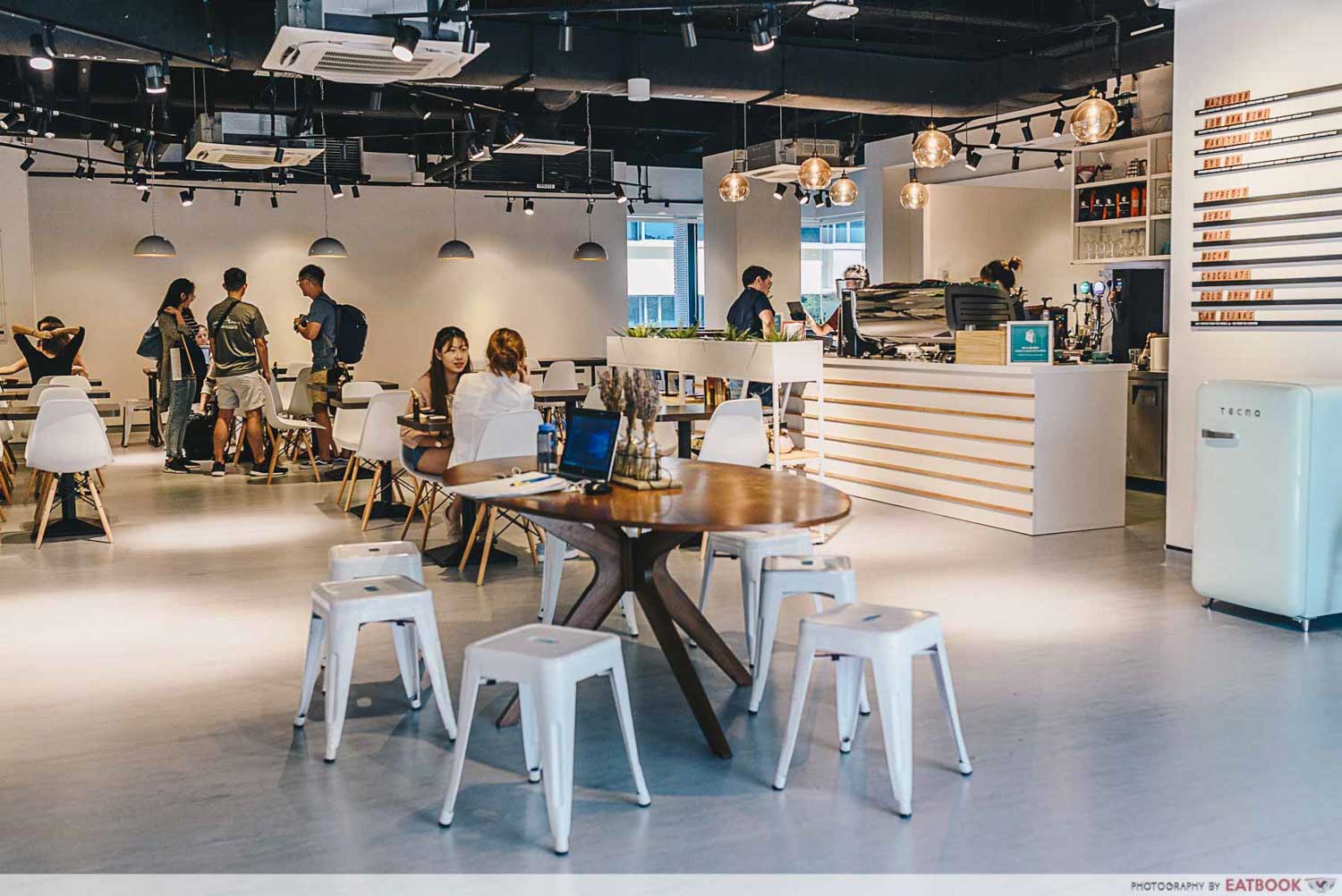 The cafe space was air-conditioned and spacious. It had a minimalist feel, with crisp white walls and accents of wood from the tables and furnishings. It is a godsend compared to the stuffy and crowded environment of the canteens, and I wouldn’t be surprised if students lingered for awhile after eating their meal.

However, it can get echoey when the crowds roll in d for lunch and dinner. Make your way down earlier to snag a table and avoid the noise and bustle. 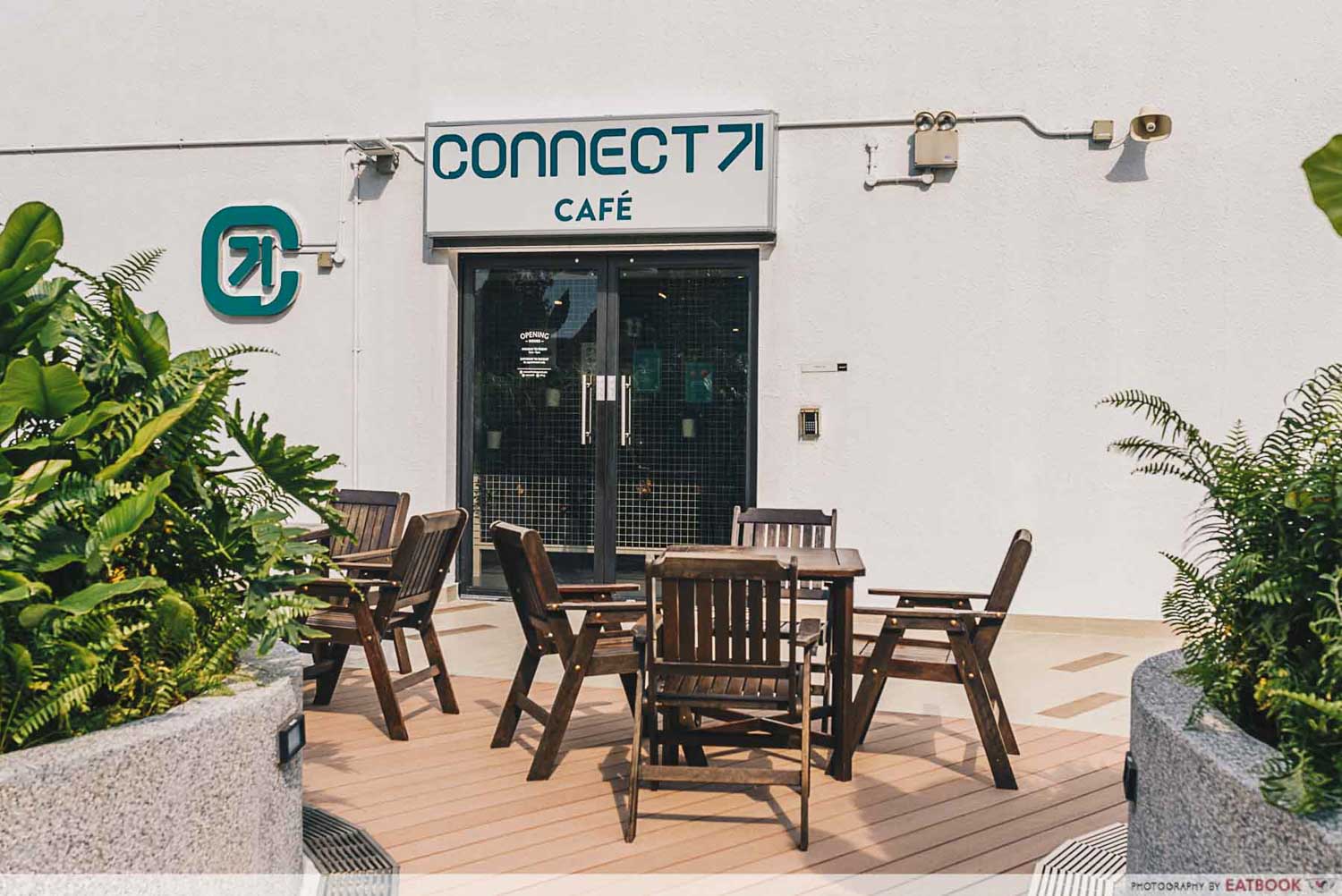 The vision behind the name “Connect 71” is to bring people together to connect over delicious food and a cup of coffee. Their efforts to do so have been quite successful. While we were there, there was a steady stream of students and staff either coming in for a meal together or for a chat over coffee and freshly-baked pastry.

From curation of the menu to execution of the dishes, we clearly saw the effort put in by the owners. Compared to NTU canteens, Connect 71 has steeper prices for a meal. However, you can be sure that you are paying for quality food that looks and tastes good.

If you are a lover of hearty rice and noodle bowls, then check out our review of Tie Fun Wan or Ishiro for more food spots!

Cons
– Steep prices for a meal on campus
– Condiments were lacklustre

Opening hours: Mon-Fri 9am to 9pm, Sat-Sun by reservation only 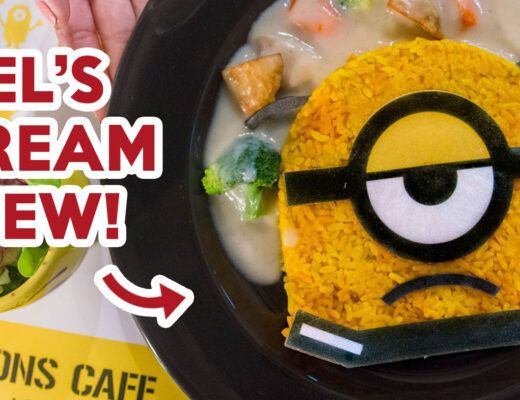 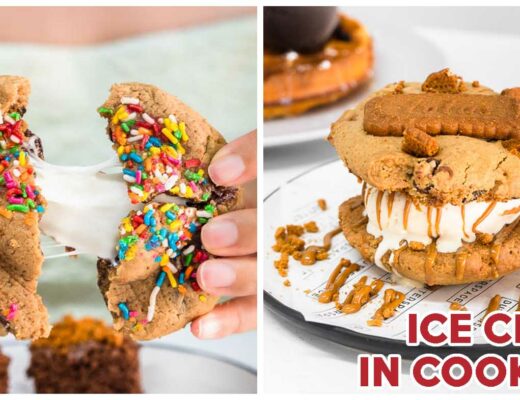