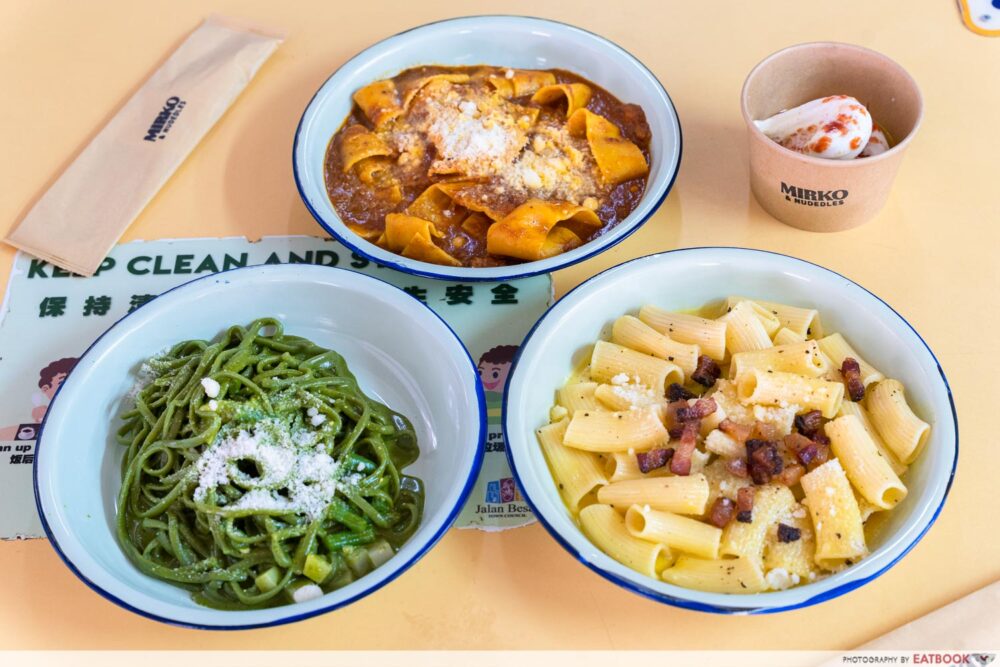 When a Michelin-starred chef announces he’s collaborating with a hawker for a month-long pop-up, you know it’s going to be hot stuff. How hot, you may ask—think sold out in 35 minutes kind of hot. From now till 17 September 2022, you’ll find ex-Chef de Cuisine of one Michelin-starred Braci, Mirko Febbrile, behind the counter at Nudedles in Chinatown Complex. 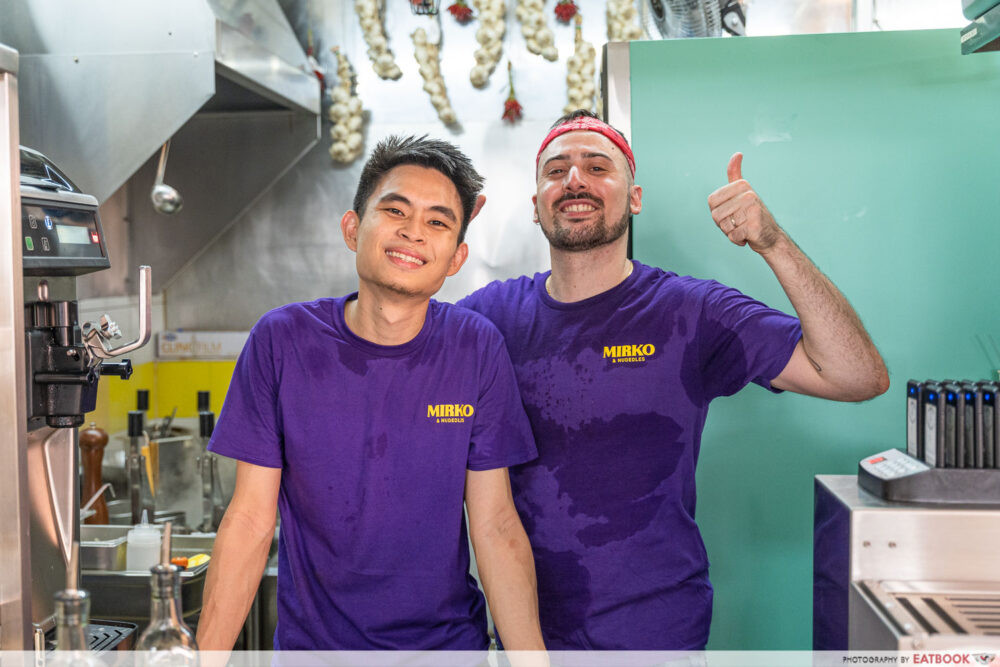 In case you missed it, Nudedles is a hawker stall by 28-year-old Clarence Chooi, who in spite of his young age has already chalked up kitchen experience at big-name restaurants including the now-defunct Joel Robuchon Restaurant, Jaan by Kirk Westaway, as well as Olivia Restaurant & Lounge. 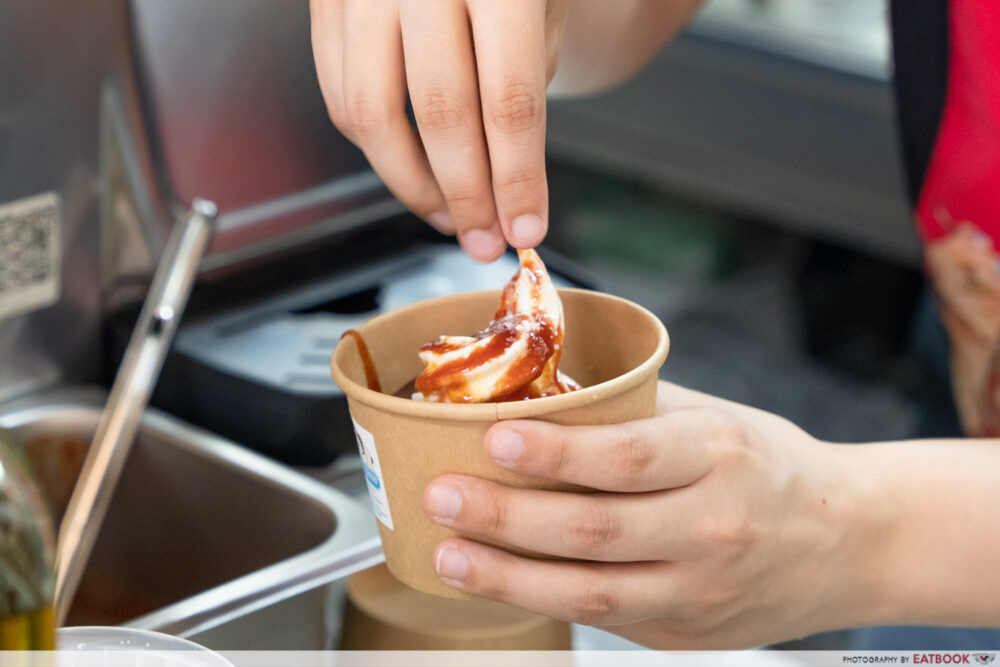 Then you have Puglia native Chef Mirko, who started his culinary journey at the tender age of 13. It’s little wonder then that the pop-up’s only dessert is Burrata Soft Serve ($5), starring the region’s famed cheese. The creamy, almost-buttery treat is finished with a tomato-strawberry compote, Pugliese extra virgin olive oil, and a sprinkle of sea salt.

Besides the soft serve, there are four pasta dishes on the menu. In another nod to Chef Mirko’s heritage, there’s Burnt Wheat Cavatelli ($8), a tomato-based pasta topped with salted ricotta, which was sold out 25 minutes into the opening.

Their cavatelli, a type of traditional fresh pasta from Puglia, is made with semolina and Grano Arso—another Pugliese specialty product. This burnt wheat flour is said to have an intense flavour with a smoky edge. 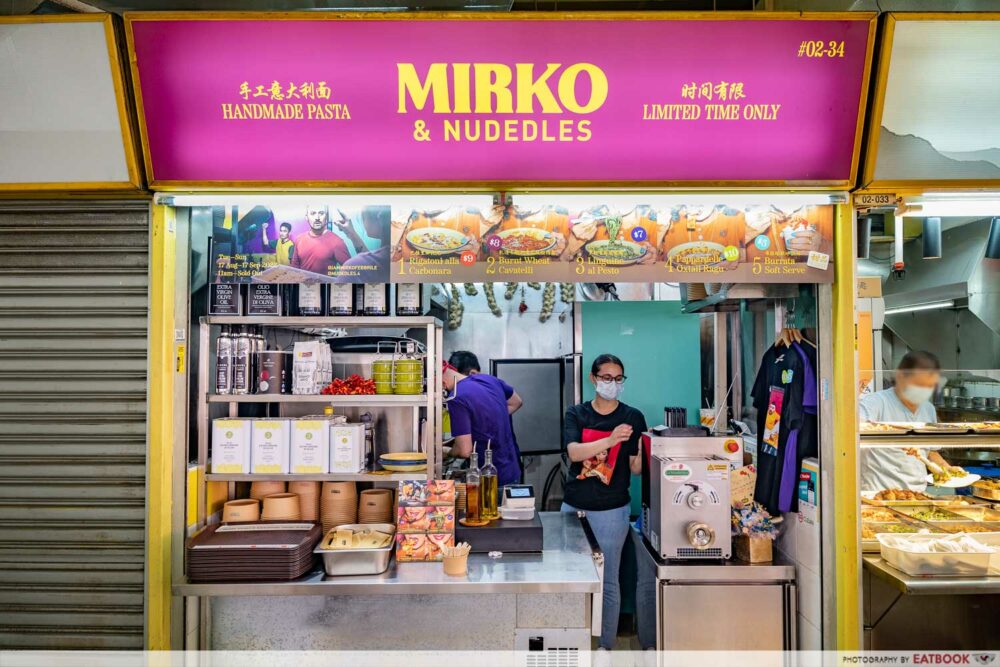 FYI, we arrived 20 minutes before Nudedles opened, and were already number 16 in line—far behind the ones who came bright and early at 9am.

One and a half hours after we’d placed our order, we were served Linguine al Pesto ($7), Rigatoni alla Carbonara ($9), and Pappardelle Oxtail Ragu ($10). 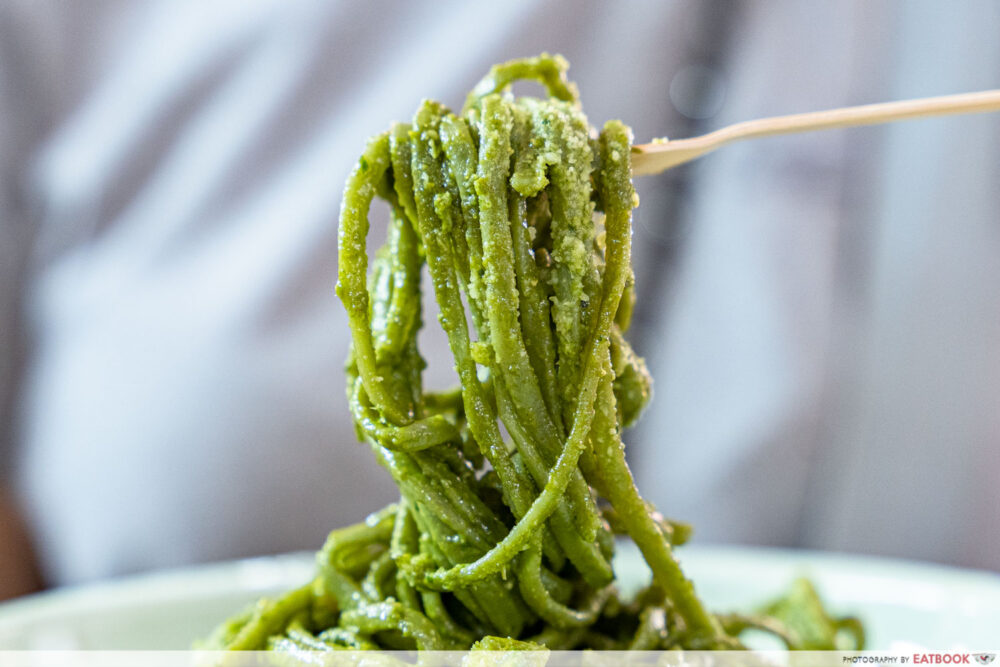 Of the three, the Linguine al Pesto would probably be the most divisive: it’s ultra-green and punchy with their house-made Pesto alla Genovese. It’s also tossed with diced potato and green beans, which is a traditional Ligurian way of preparing this dish. If you’re a carbonara purist, this Rigatoni alla Carbonara would fit the bill. 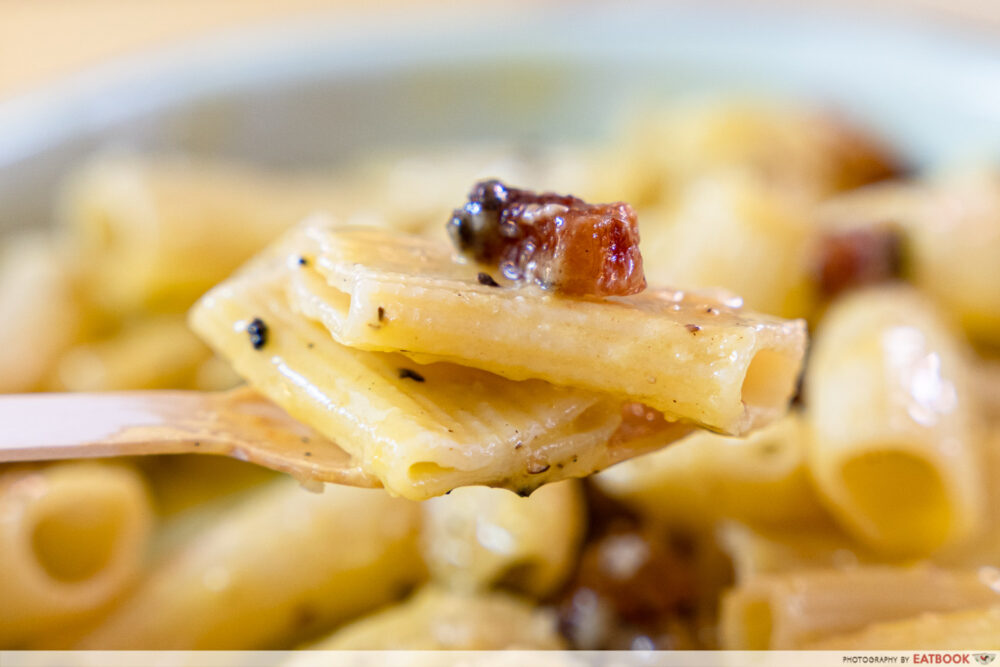 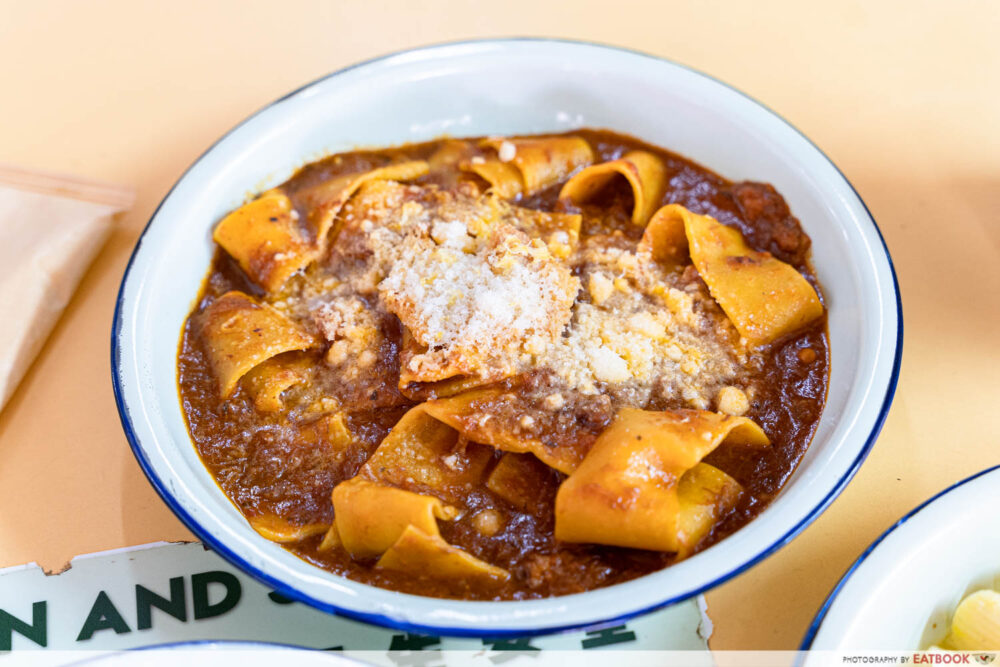 The Pappardelle Oxtail Ragu rings in the till as the most expensive item on the Mirko & Nudedles collaborative menu. But if you think about it, a similar dish would easily set you back three to four times of this in a restaurant. 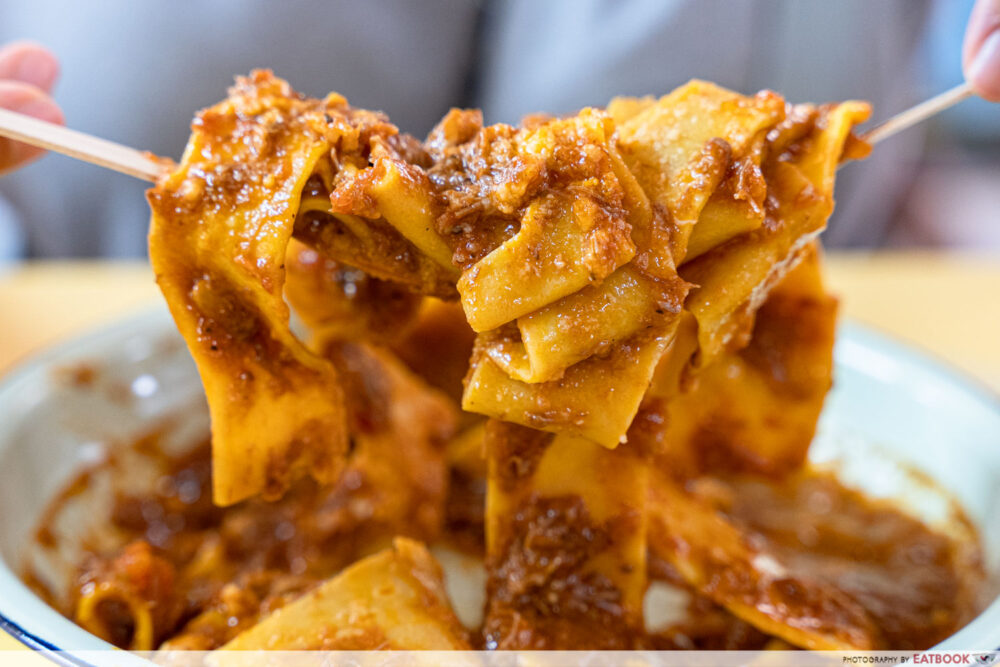 All the pasta that’s served at this pop-up is handmade fresh daily; only 80 to 100 portions of each are prepared every afternoon for the following day’s service. They’re also bronze-cut, which gives them a slightly coarser finish, allowing the pasta to absorb every bit of sauce better. 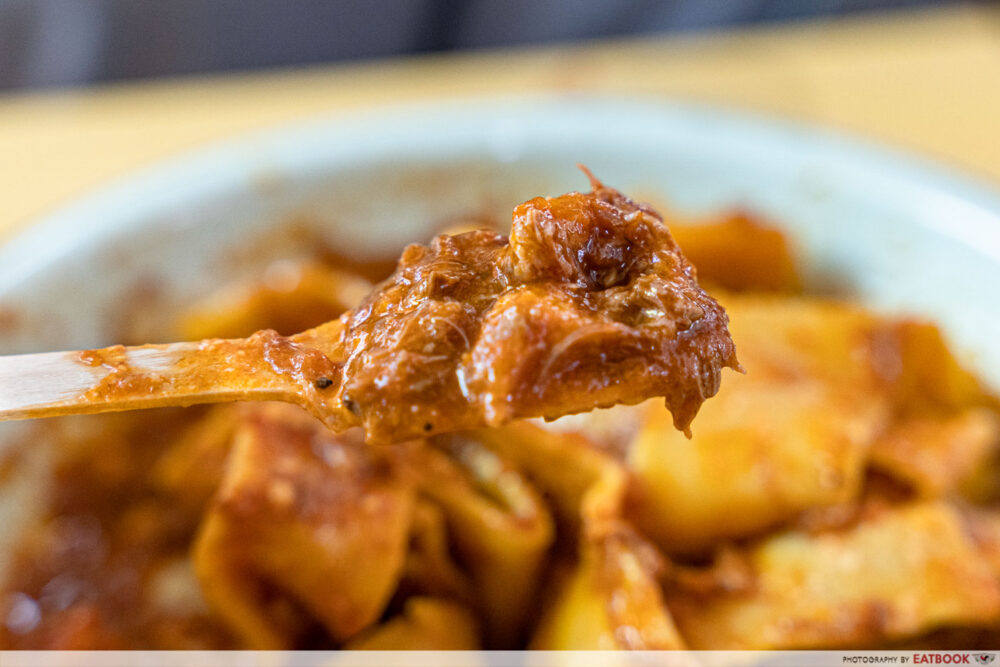 I recommend giving the ragu a taste on its own: it’s Chef Mirko’s recipe, made with San Marzano tomatoes, with the surprising addition of raisins, pine nuts, and Amalfi lemon.

Come early, and be prepared to wait. Today’s only been the first day of this pop-up, so the hiccups are expected. They won’t be increasing the number of portions available daily, because it’s a very small kitchen, and there’s just the two of them making everything from scratch.

While you’re at Chinatown Complex Food Centre, you could check out Fatty Ox for HK-style roast meats! Otherwise, there’s Xiang Xiang Cooked Food, which sells handmade sweet potato balls that are often sold out within hours.

Photos taken by Melvin Mak
This was an independent visit by Eatbook.sg 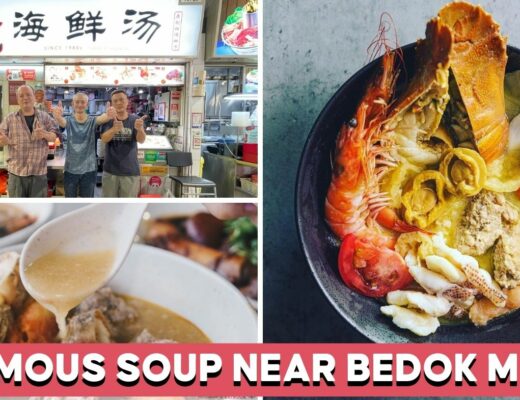 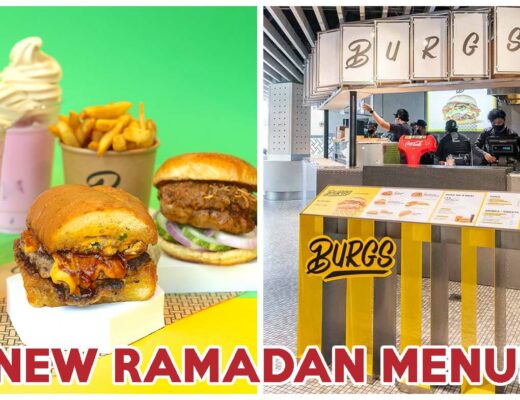 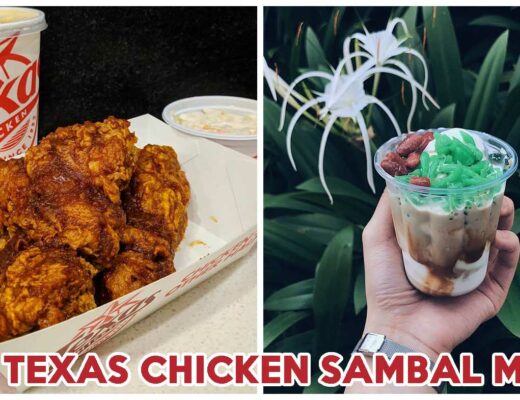