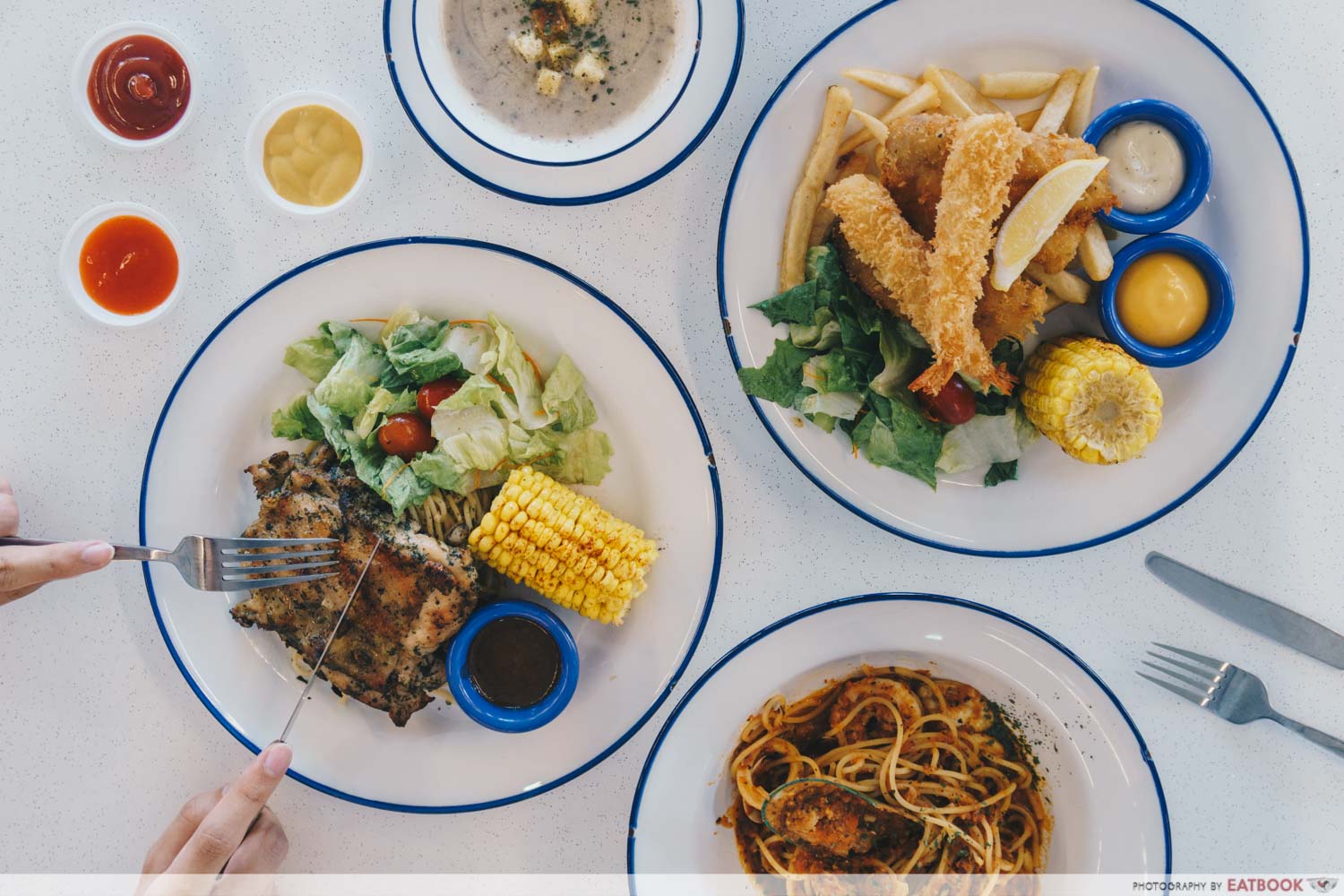 Western food was my number one choice as a young boy. I grew up loving lamb chops and bowls of spaghetti, and while I prefer Hokkien mee and duck rice now, I still have a soft spot for Western hawker stalls. Naturally, I was excited to visit El Carbon Grill House, a new beautifully decorated hawker stall at Ang Mo Kio that serves up Western fare. 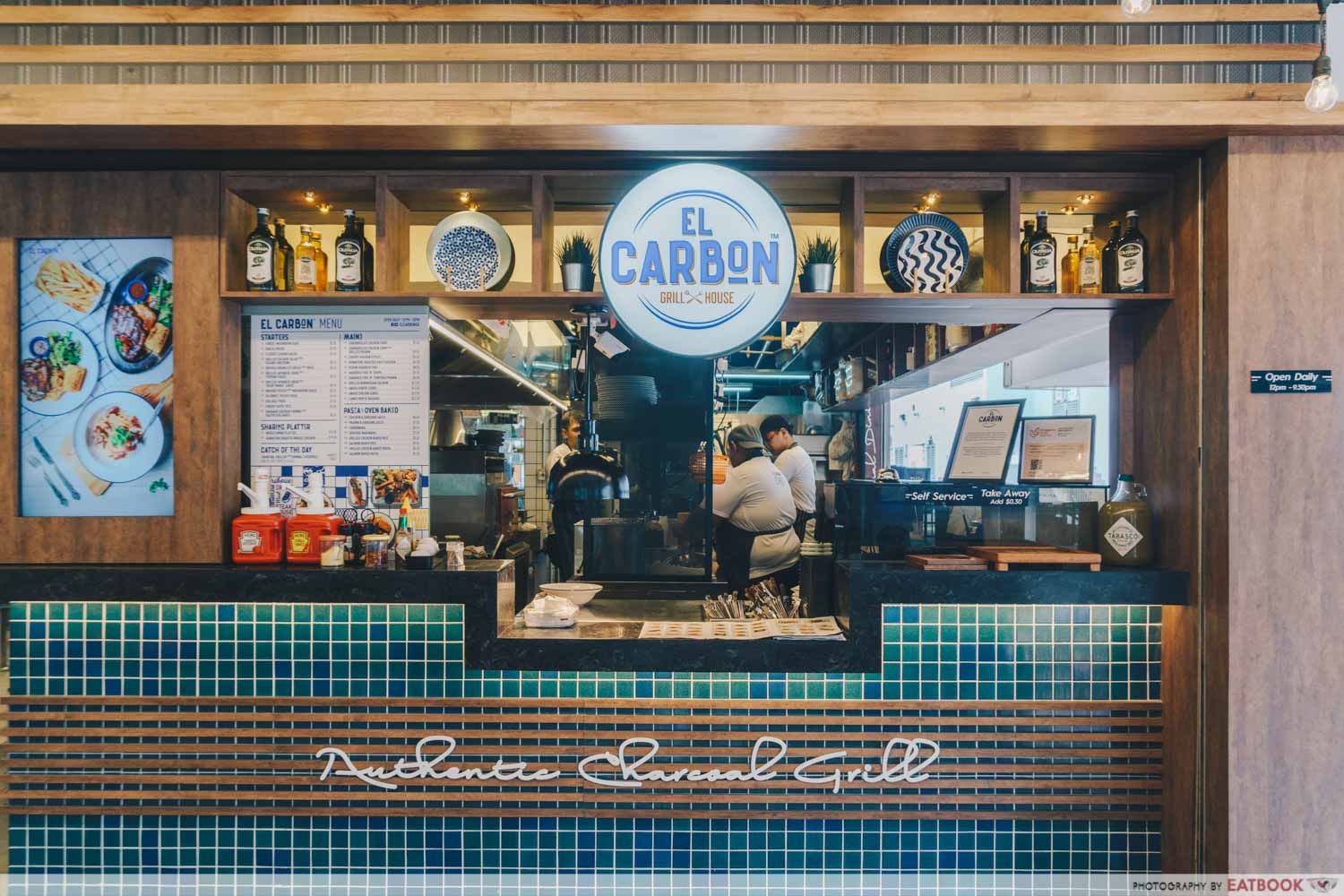 One thing I immediately noticed was how El Carbon had its own aesthetic and branding. Plenty of stalls simply use the default storefront that coffee shops have, but this two-month-old stall really went the extra mile here.

It was the little things that impressed me when I noticed them—matching plates, a consistent blue and white colour scheme, and the smooth wooden textures on their walls and cutlery.

They didn’t settle for being a run-of-the-mill Western food stall. There was an effort to stand out and establish their stall’s aesthetic. Even small things like the sauce bar had a fancy touch to it. Instead of giving salt and pepper shakers, they stocked grinders so that you can churn up your own peppercorns and Himalayan pink salt onto dishes. 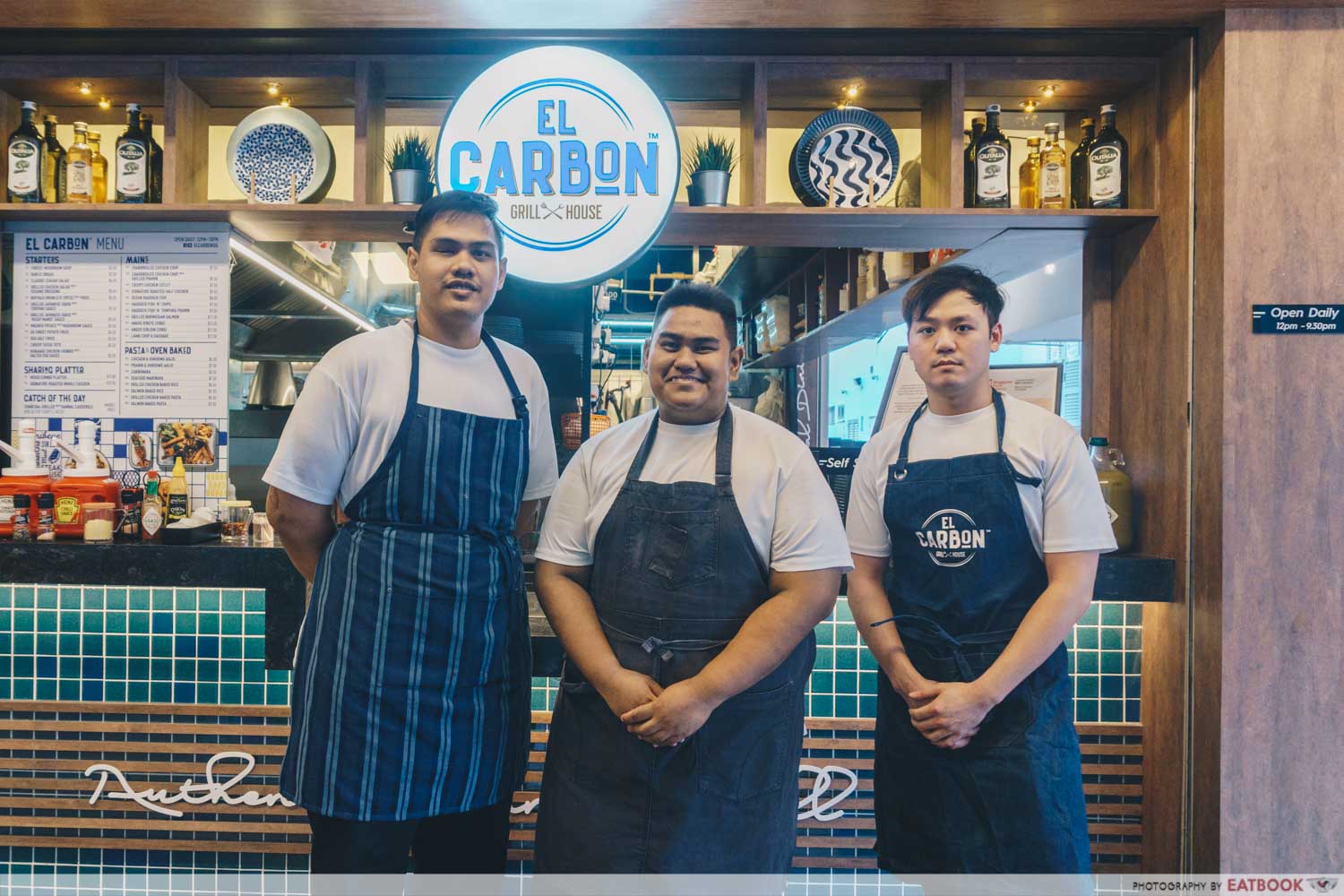 The stall opened on 7 October 2019, and is currently managed by head chef Syahir Osman. Before El Carbon, he worked at Elfuego by Collin’s as a demi-chef. The 23-year-old is a Shatec graduate, with a degree in culinary and pastry preparation. While working in the fine-dining restaurant, he picked up skills like how to use specialised cooking equipment.

The centrepiece of their kitchen is the Mibrasa oven—one of the most highly-regarded grills on the market. The charcoal-powered oven allows a chef to closely control the temperature and fire, keeping the taste of food consistent among different batches. It takes a great deal of training to use it, and Syahir managed to master it during his time at Elfuego.

After El Carbon was started up, they decided to get the same kind of oven, and they demonstrated the cooking for us. The name of the stall itself is a reference to this oven. ‘Carbon’ is Spanish for coal, and the Mibrasa uses only charcoal as fuel.

The gist of it is that the oven cooks the food remarkably fast and locks in a distinct smoky flavour. This $13,000 oven got us our food in a little less than five minutes.

First up was the Charbroiled Chicken Chop ($7.50), which came with a salad, a piece of paprika-sprinkled corn, and a serving of aglio olio. I liked that they served it with pasta instead of fries. 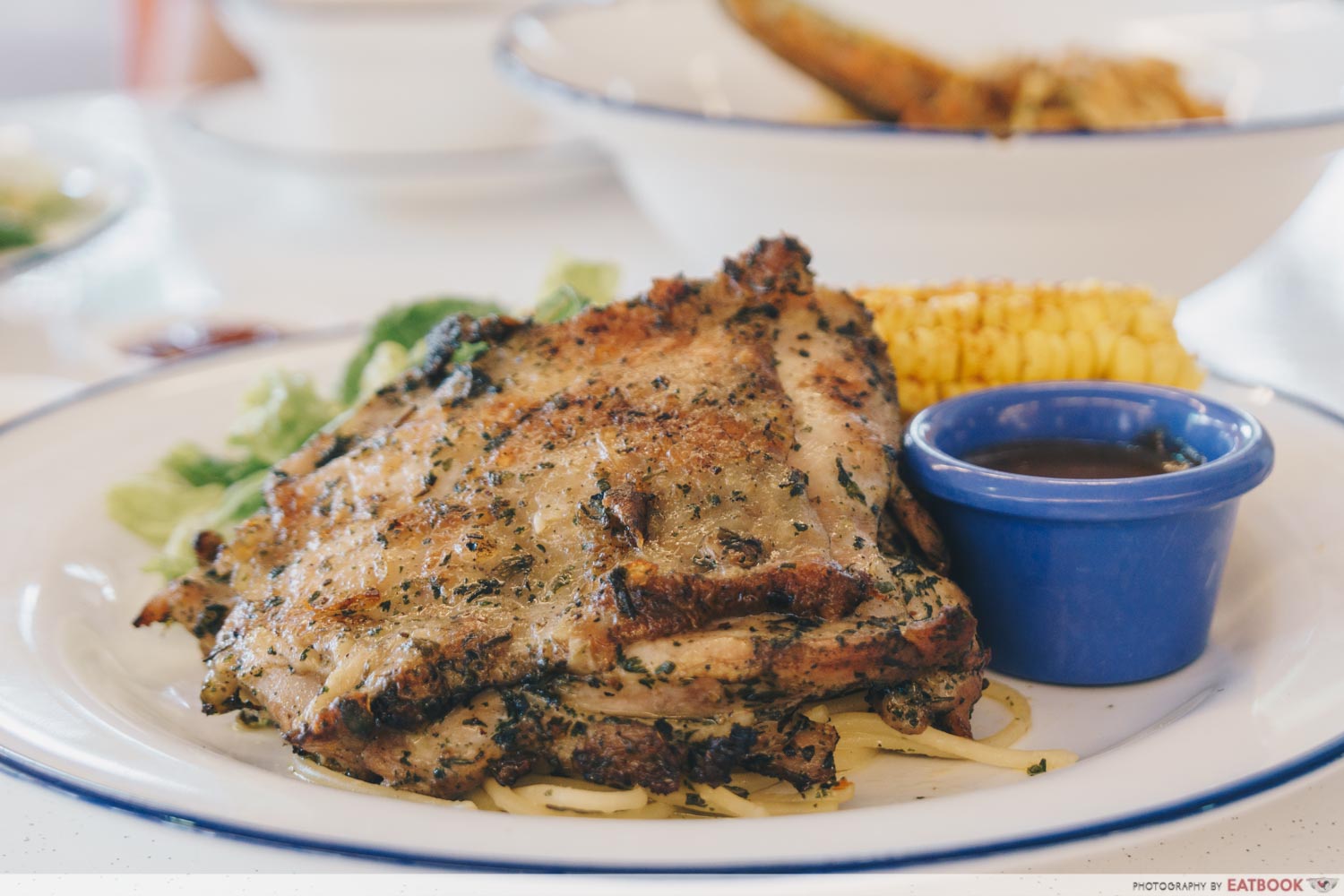 The chicken was decently sized for its price, and the skin was lightly charred from the cooking process. For $7.50, it was a pretty good deal. There’s a slightly pricier $9.50 version that comes with two additional grilled prawns. 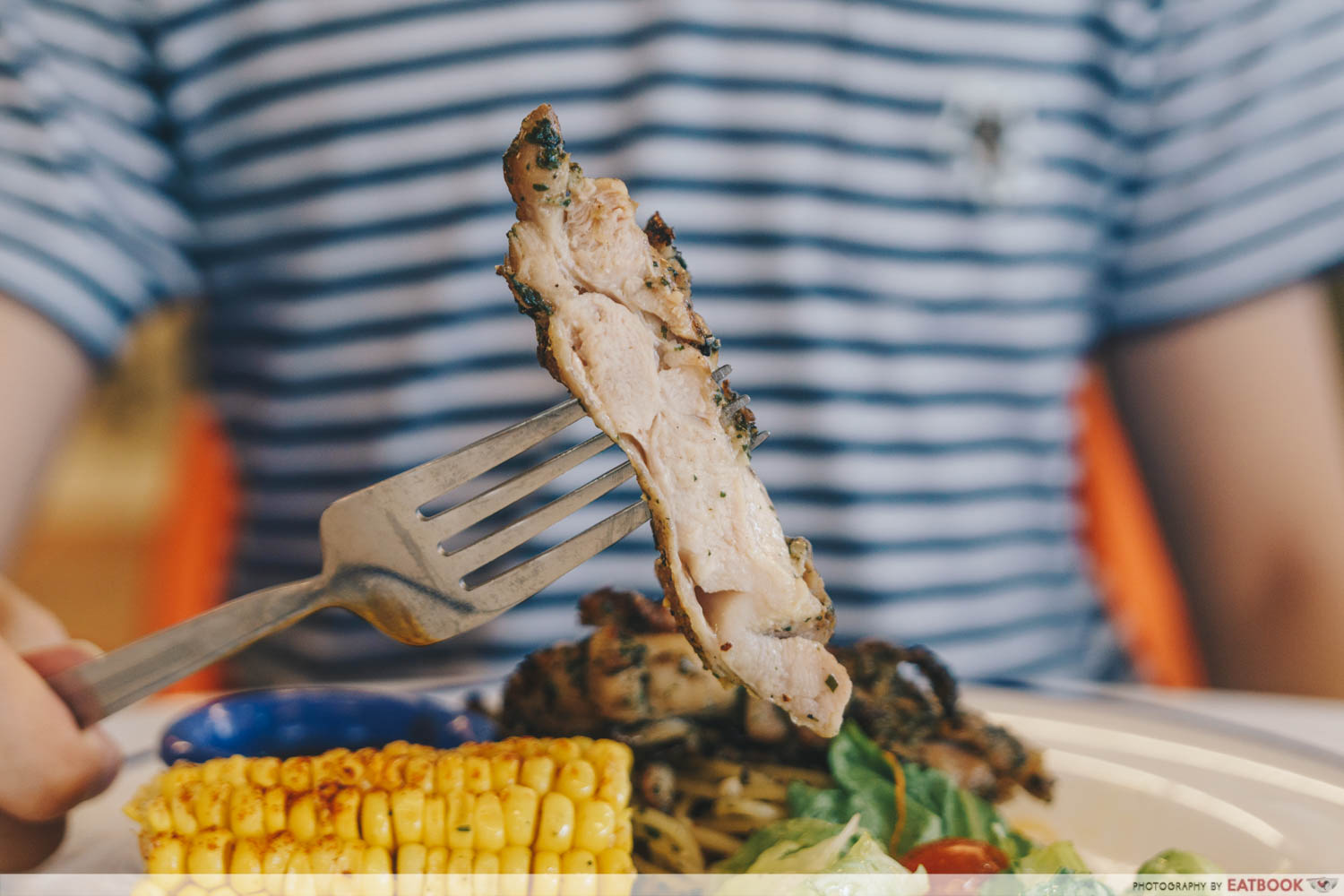 The chicken thigh was thick and juicy, with a tender texture and peppery exterior. The layer of fat beneath the crispy skin gave it a rich savouriness. It was seasoned wonderfully and the whole cut was evenly flavoured. 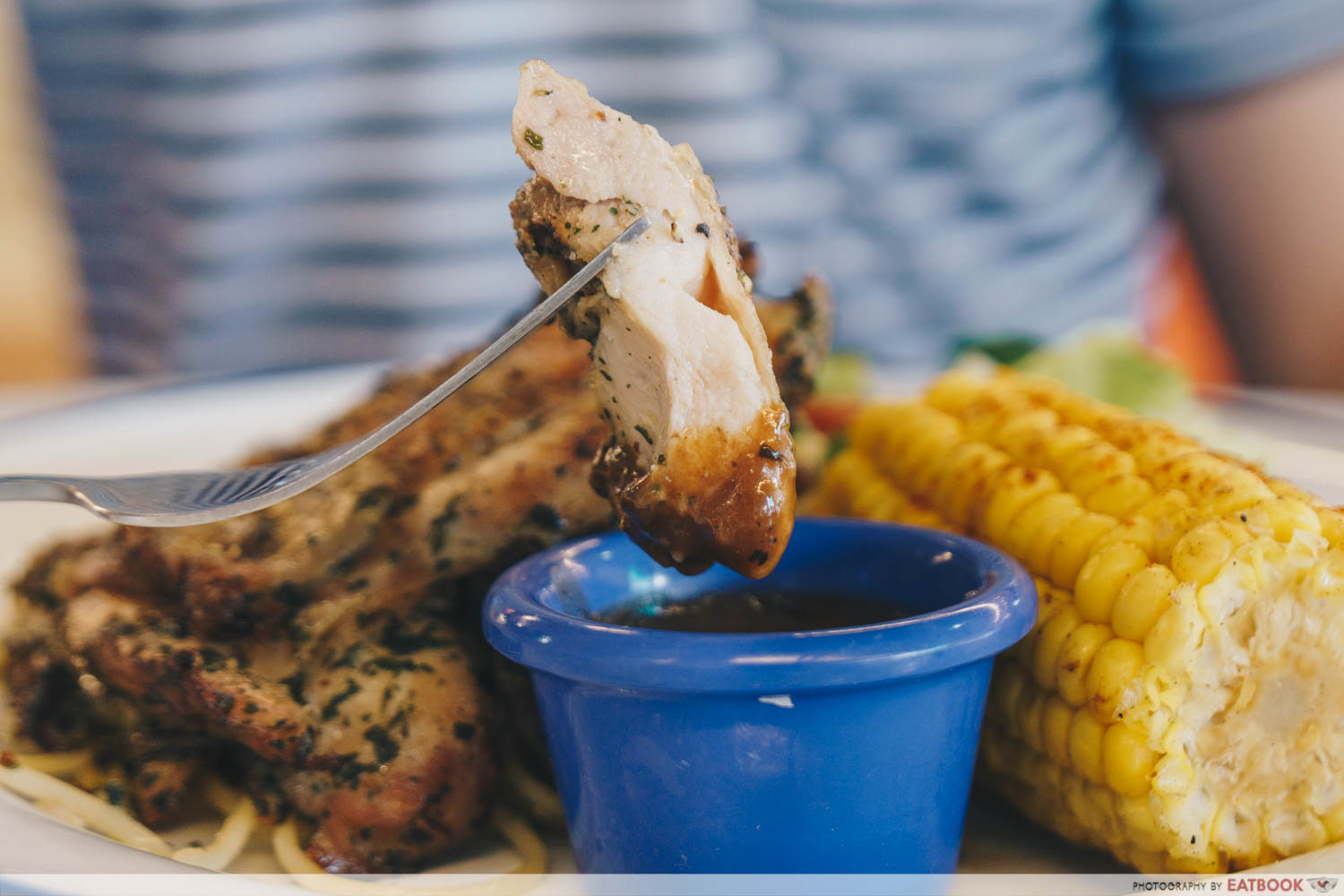 The chicken was already great on its own, but tasted a lot better after being dipped in the black pepper sauce. I also ground up a small mountain of peppercorn onto the dish and that gave it an extra kick.

I found myself craving another plate even after polishing off the entire chicken chop. 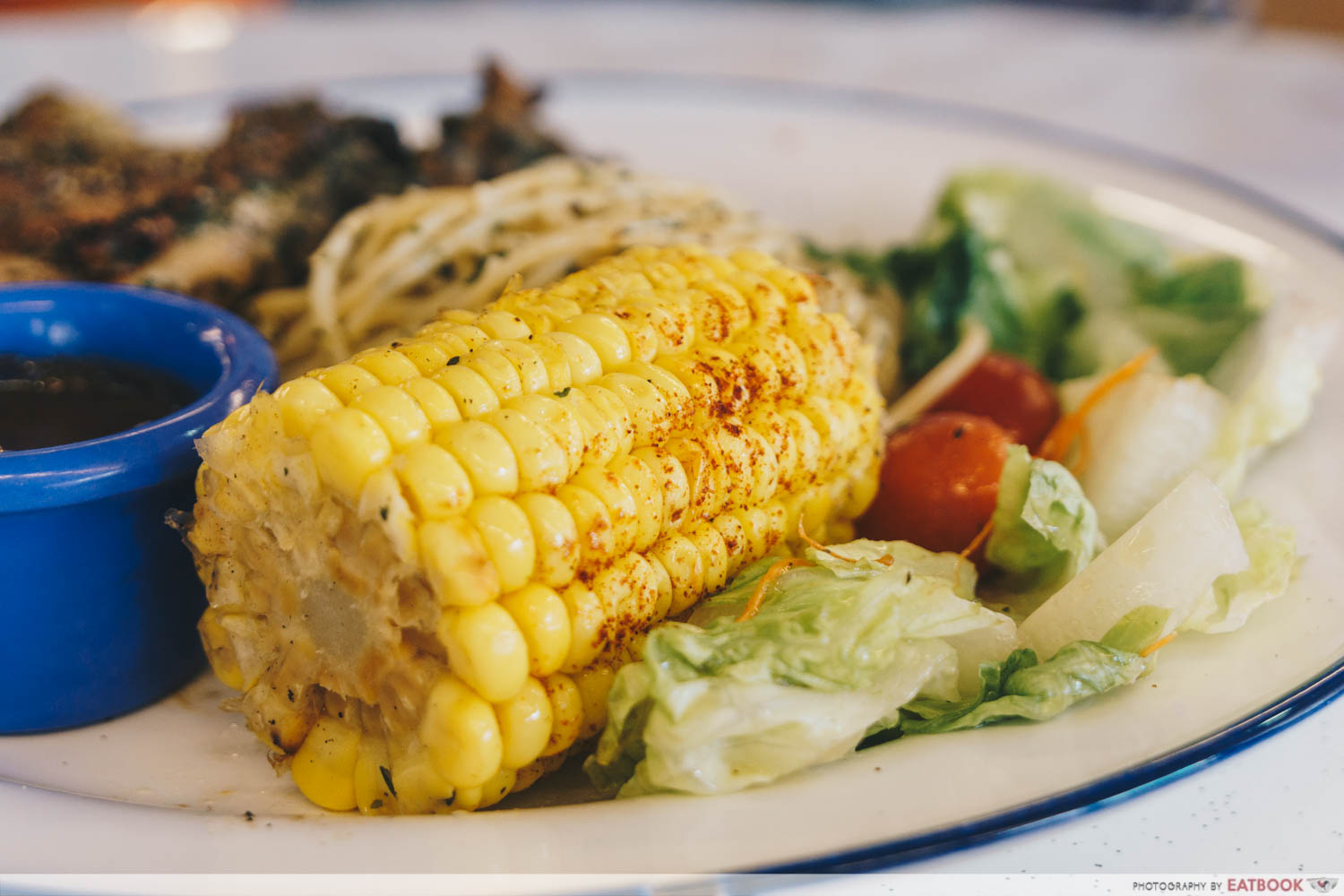 I appreciated the addition of salad, which accompanies all the main courses on the menu. The crunchy lettuce helped even out some of the stronger flavours and lingering fats from the chicken, while the grilled corn was sweet and tasty. 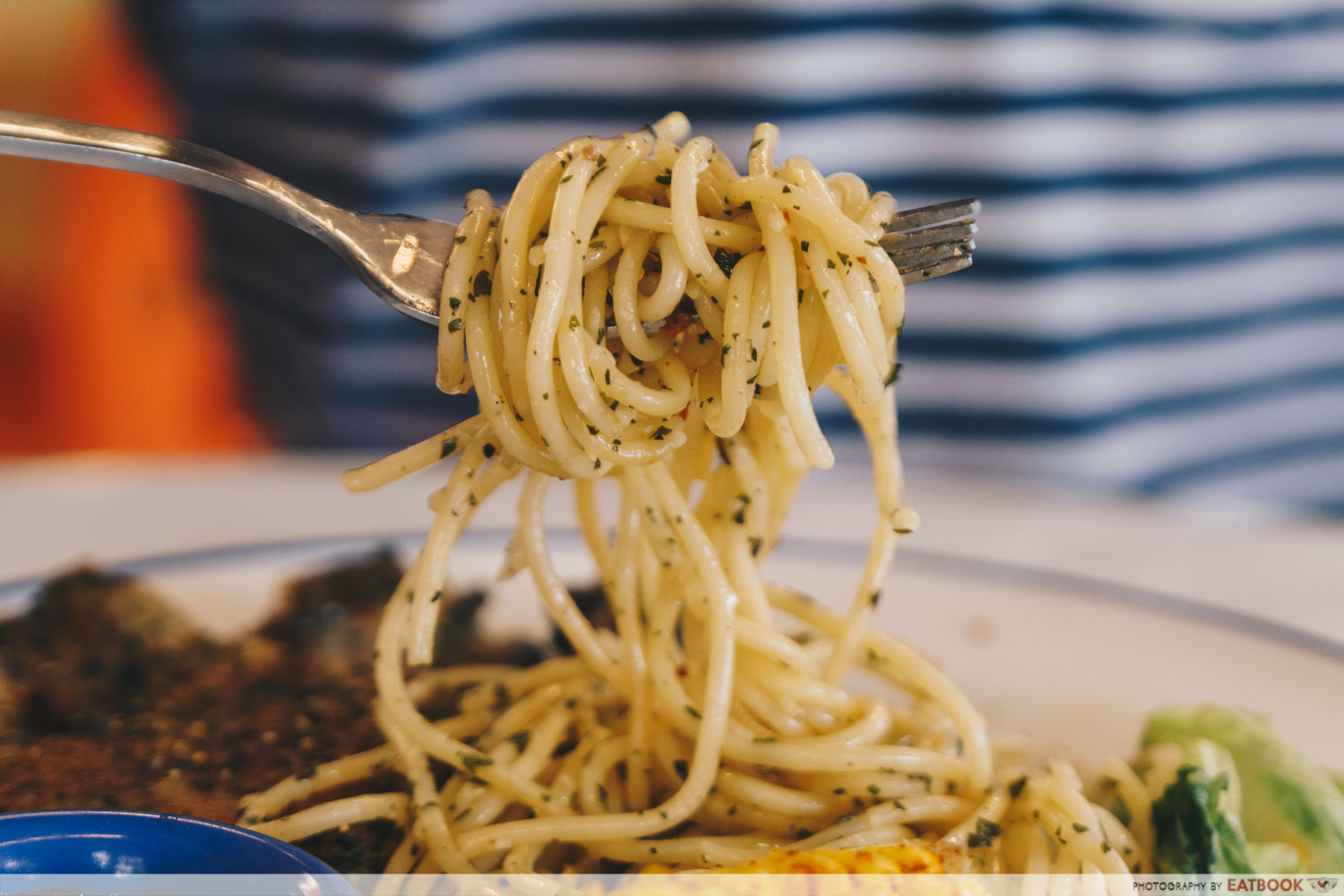 The fragrant pasta was served with bits of minced garlic, a dash of herbs, and was flavoured lightly by olive oil. I enjoyed it with a little bit of cheese sprinkled over it. The aromatic noodles came in a pretty big mound, and the carbs rounded out the already filling meal. We got the Haddock Fish ‘N’ Tempura Prawn ($9) that comes with two extra tempura prawns. The version without the prawns costs $7.50. A reviewer on their Facebook page said that the haddock was one the best western food they’d had in a coffee shop, so we took their recommendation and ordered it. The salad made it stand out a bit from a typical fish and chips dish. The haddock fillet was a little on the thin side, but was flavourful and packed with a natural sweetness. It was firm and didn’t fall apart as softer fishes might, but was still tender when chewed and cut. A crunchy layer was formed over it by the fried batter. 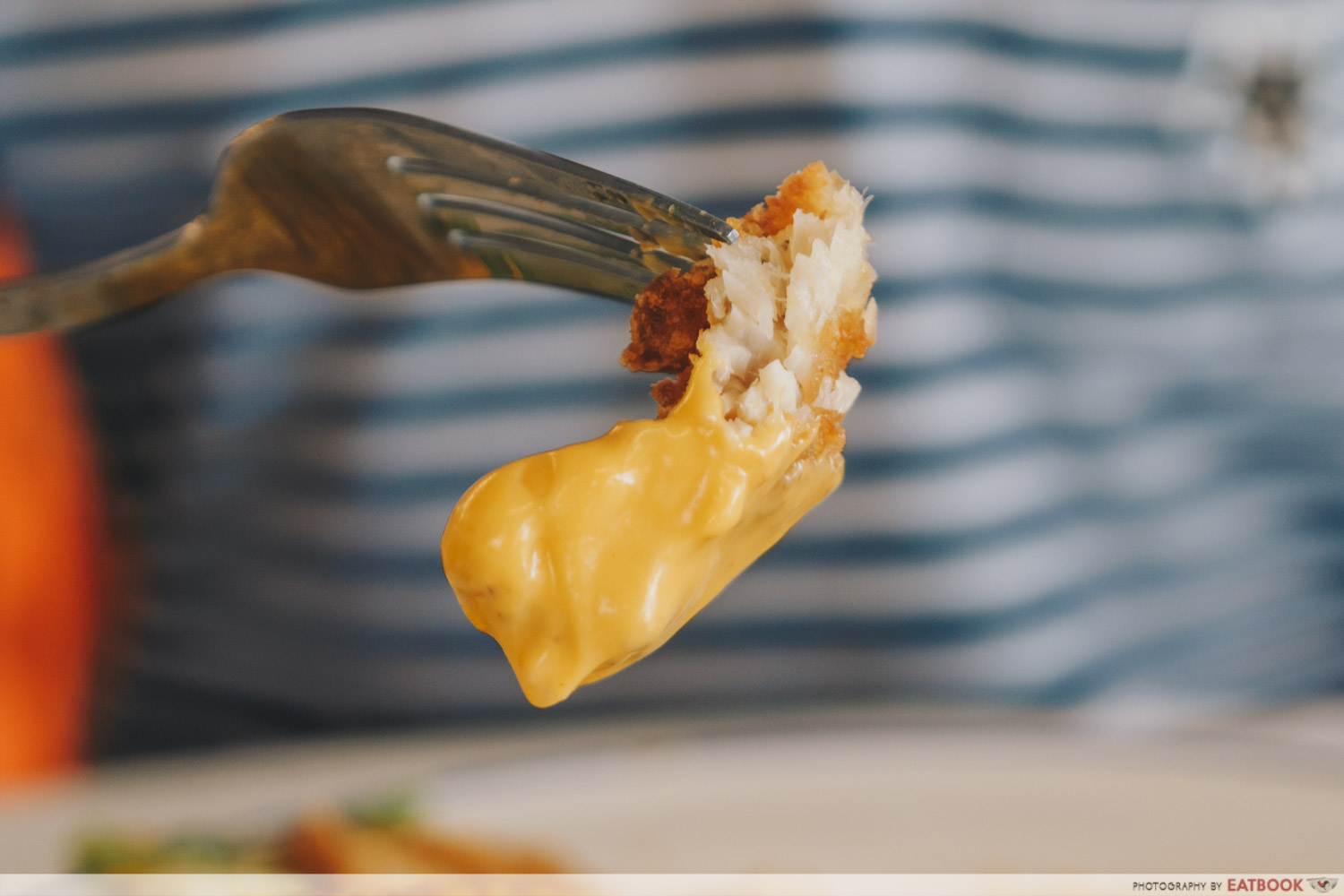 Dipping it in the cheese sauce gave a bit more depth to it, adding a savoury taste to the crisp exterior. I preferred the cheese sauce over the tartar, and the sharp cheesy taste went well with the seafood sweetness. 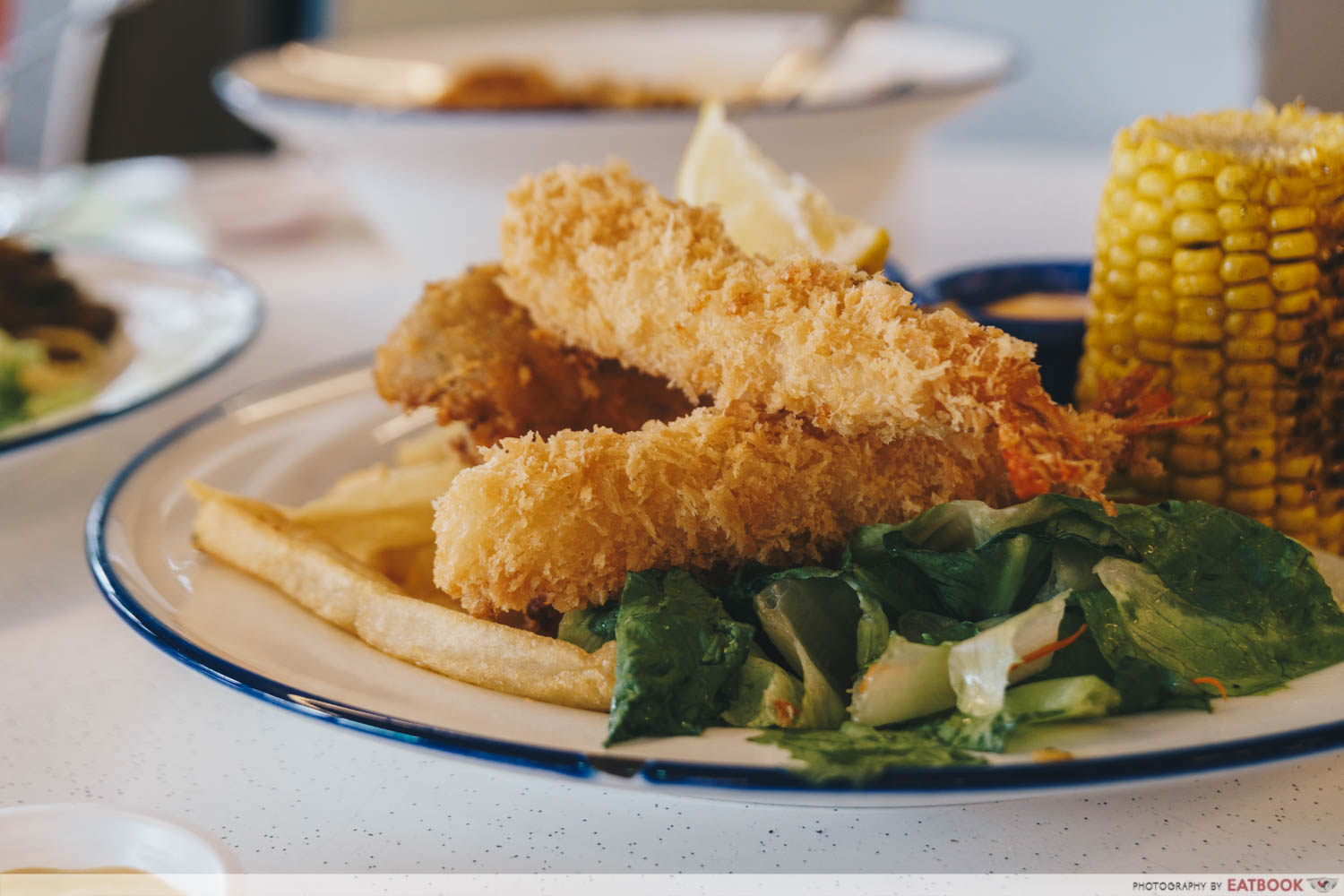 The tempura prawn was golden brown and crispy. It crunched easily when I took a bite, and the meat was soft and sweet. I liked that there was a good ratio of batter to prawn meat.

Overall, while the fish was pretty good, I wouldn’t label it as being the best fish and chips I’ve had. While haddock is packed with flavour and has a slightly firm texture, I prefer bigger, naturally thicker, and flakier types for my fish and chips, such as cod and snapper. 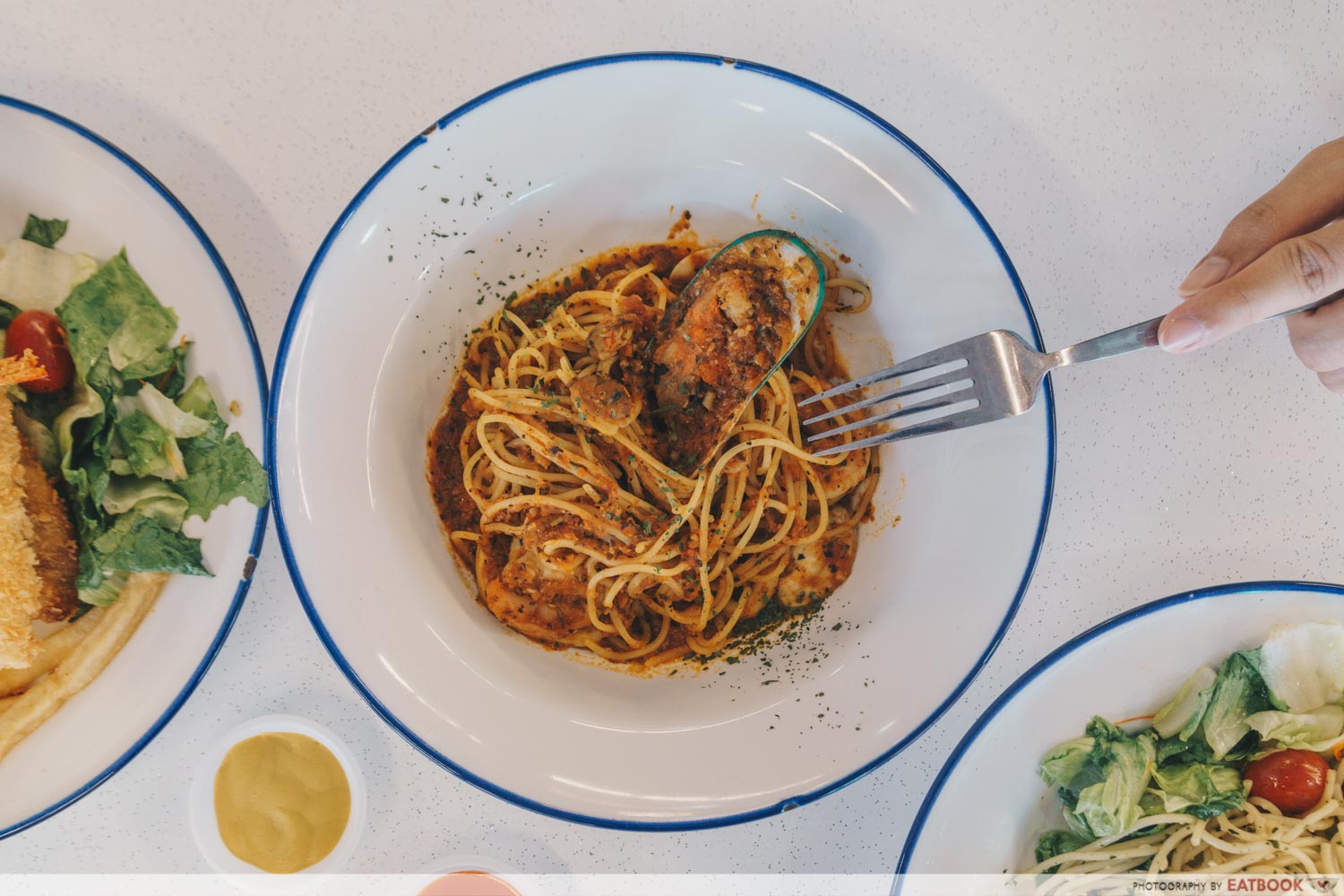 The Seafood Marinara ($7) was impressive to look at. The bowl was sprinkled with herbs—giving it a pleasant splash of colour—and the sizable seafood was the centrepiece of the pasta dish. I’m used to only getting measly scraps of seafood and a single shrivelled prawn when I order this at Western food stalls, but El Carbon didn’t skimp on seafood at the slightest. 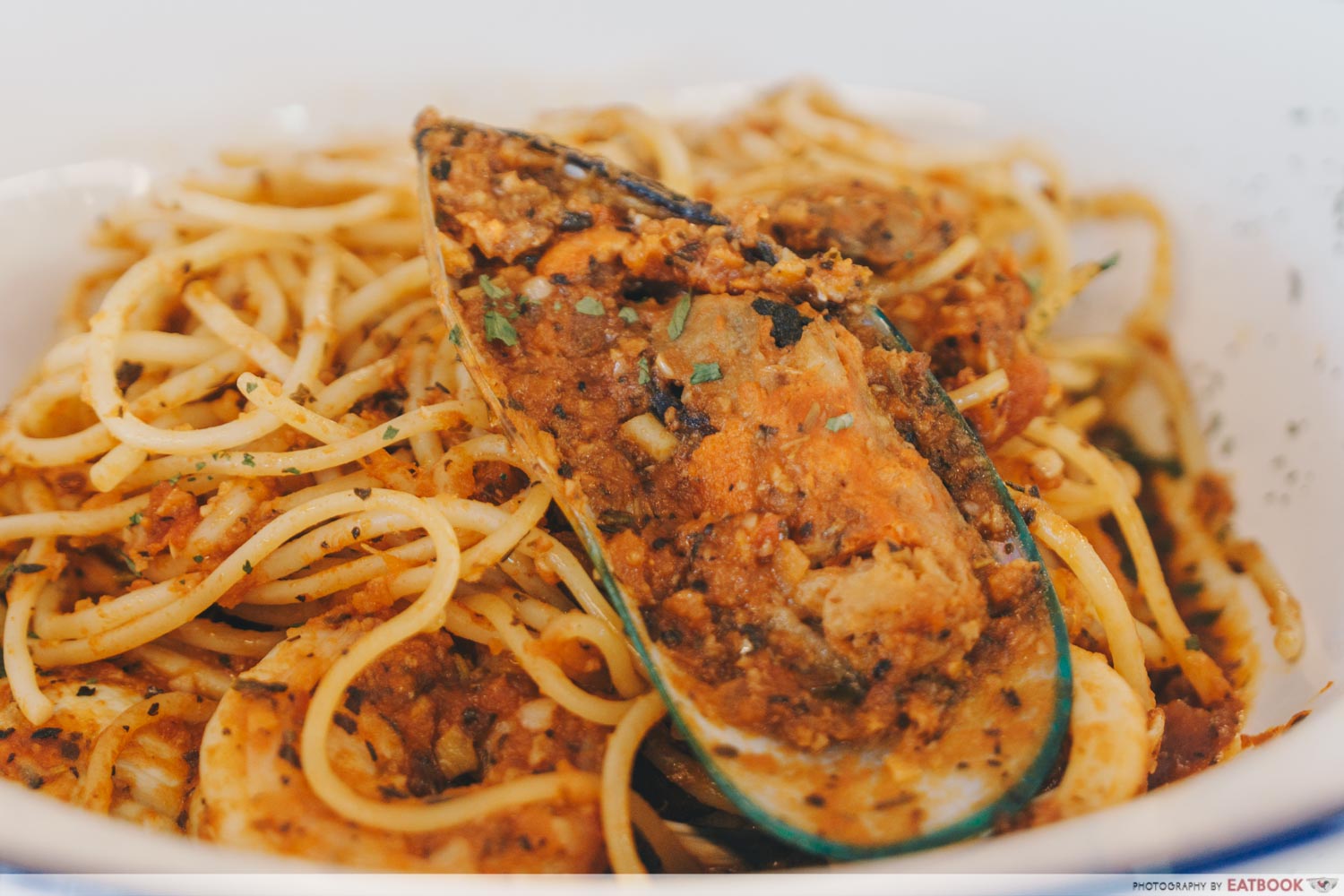 A large mussel sat in the centre of the bowl. Its vivid orange hue was surrounded by the equally bright marinara sauce. The meat was soft and pleasantly briny in the middle, while the edges were a little bit chewier. The prawn was already pre-peeled, so I didn’t have to take the trouble to pluck its shell apart before eating. The meat was juicy and succulent, and it was a lot meatier than the shrimp we had earlier. Generous amounts of seafood were spread throughout the dish. There were rings of fresh squid and morsels of clams scattered into the pasta. 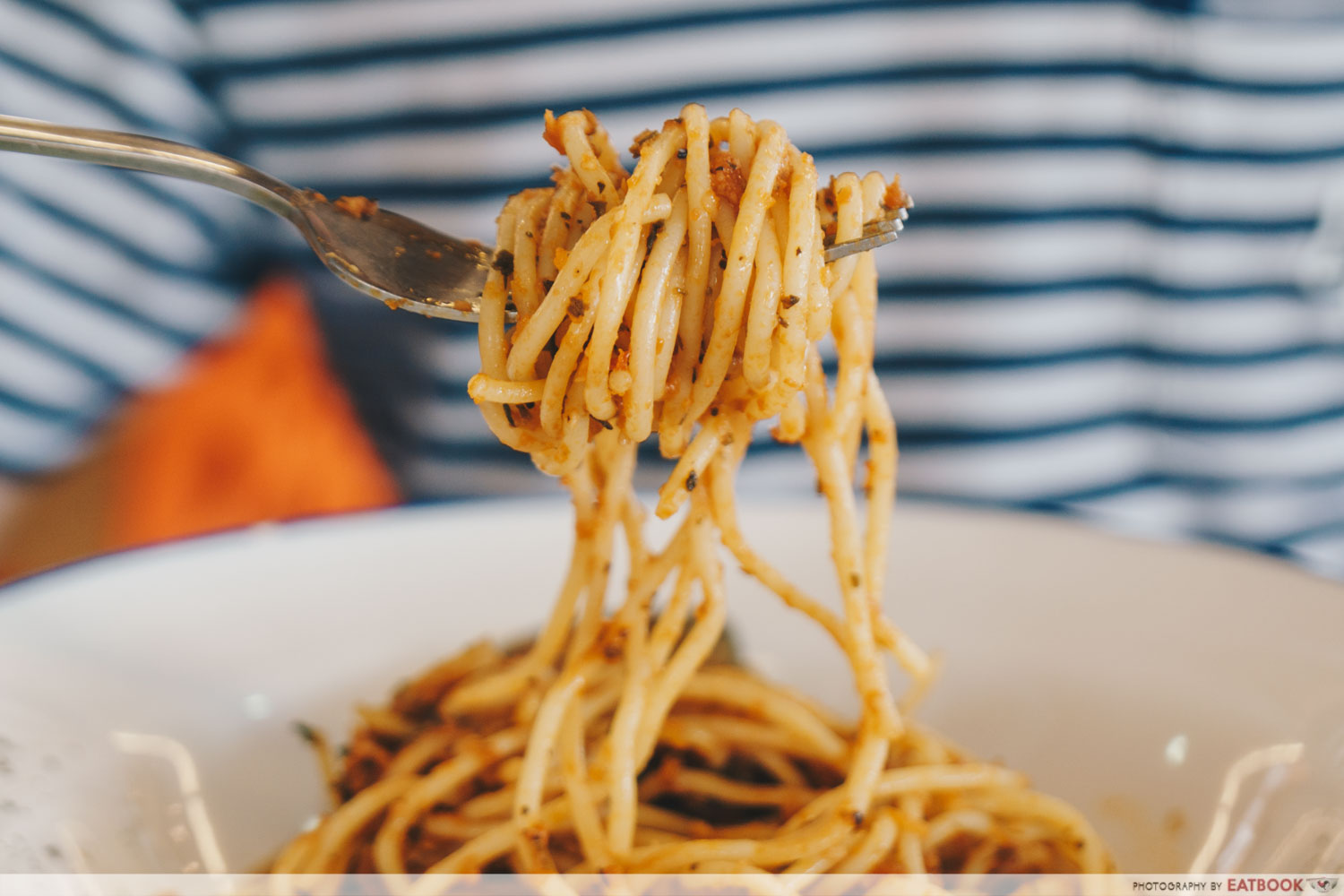 The spaghetti itself was cooked a bit softer than the aglio olio. The tomato sauce clung to each strand of pasta, and the mild seafood flavour from all the oceanic morsels gave the sauce a somewhat briny tang to it. I would have liked the spaghetti to be a little more solid, but I loved the dish as a whole. 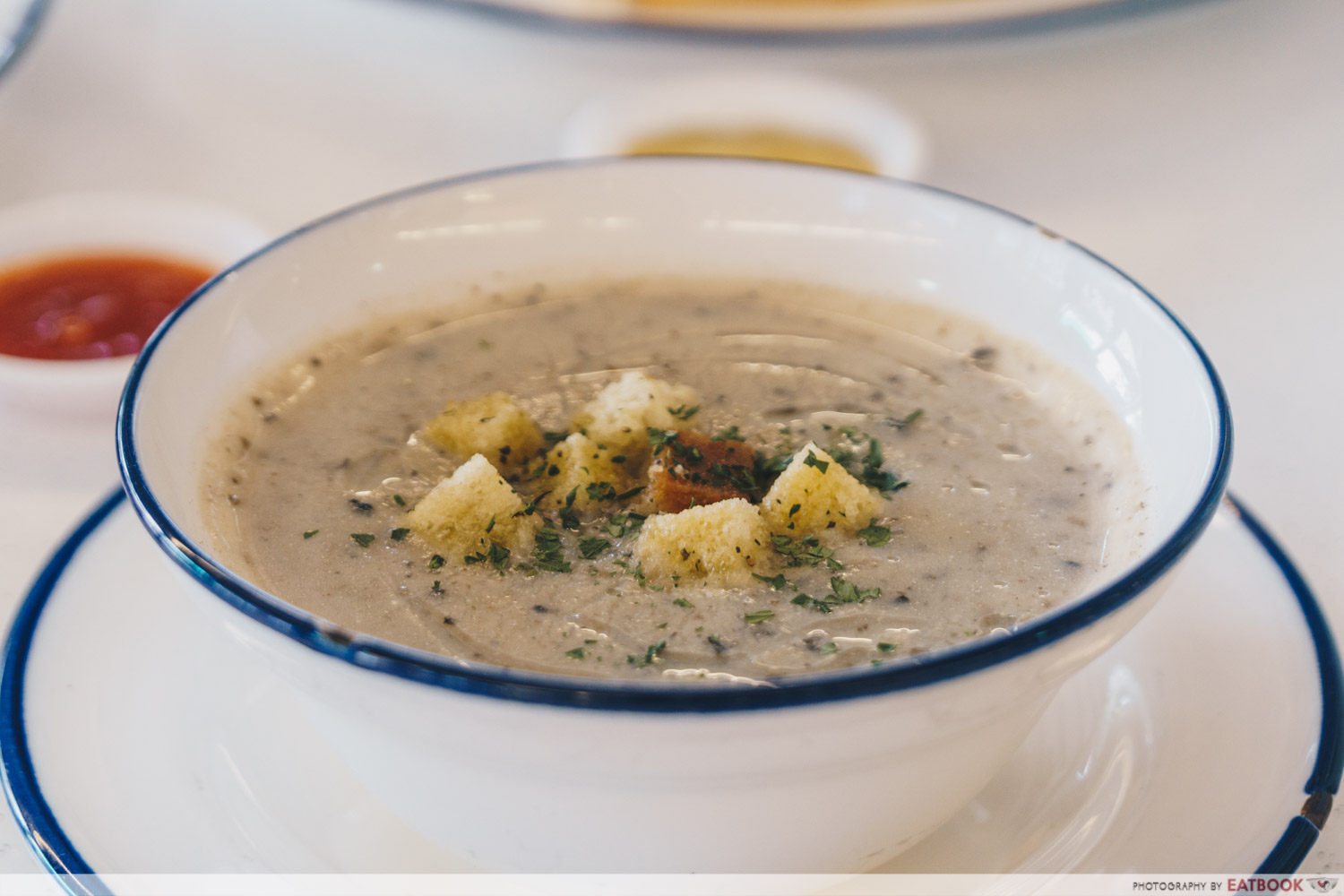 One thing I really liked was the Forest Mushroom Soup ($2.80). At its price, it came in a slightly bigger bowl than what plenty of restaurants serve up. It was topped with croutons, herbs, and a drizzle of olive oil. The soup was thick, creamy, and the earthiness of mushrooms was present in each mouthful.

Overall, I was satisfied with the whole meal. The chicken was tasty and juicy, the fish was crispy and fresh, and the spaghetti was packed with flavour. 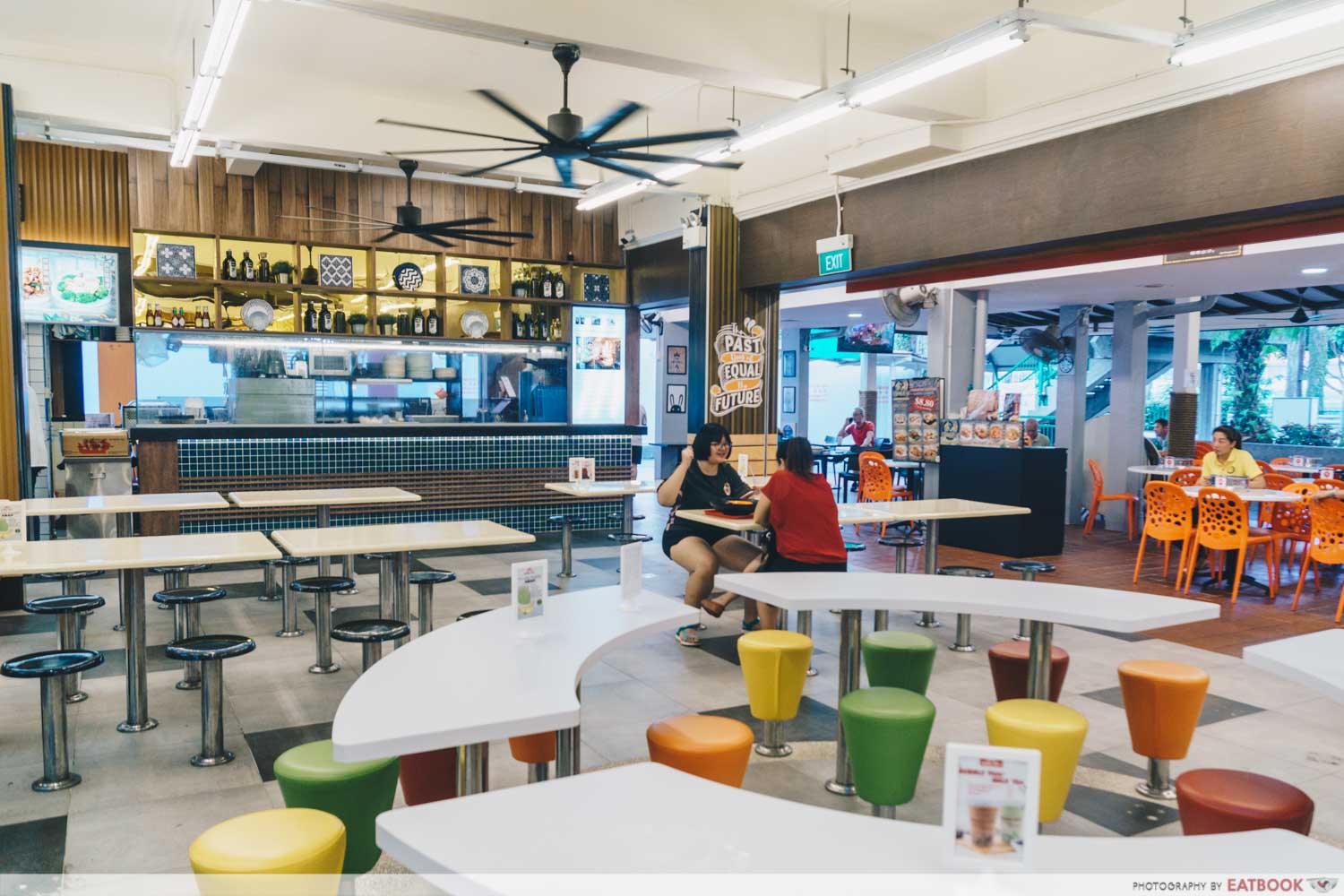 The Food Loft outlet is lively and roomy, with good ventilation and a pleasant ambience. The place is a quick five-minute walk from Ang Mo Kio MRT Station, and the route there is sheltered all the way.

El Carbon is definitely the stall that stands out the most here. It’s the largest and has a unique aesthetic when compared to the other stalls in the coffee shop. While the rest of the stalls looked pretty ordinary, El Carbon’s looming storefront gave a fancier, more deluxe air to the whole eatery. It gave me the same vibes as Astons or any other big-name Western hawker brand. 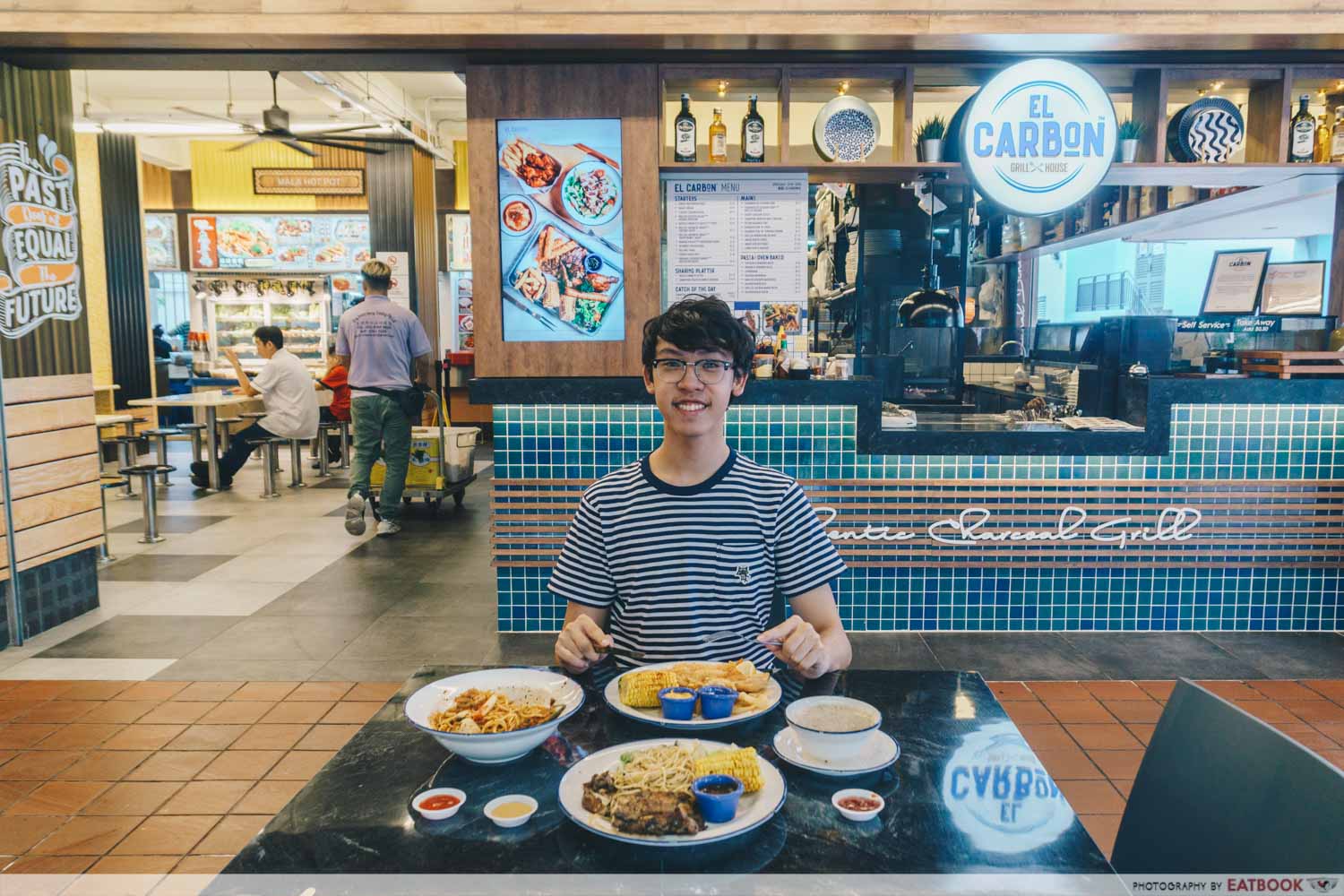 I thoroughly enjoyed the food by El Carbon Grill House. It’s great Western food in a coffee shop setting, and the prices are easily affordable. You can get a full meal for less than $10. The quality is a lot higher than standard hawker Western food too.

Apart from the food itself, the stall clearly had a lot of heart and soul put into it and the attention to detail was noticeable.

For more Western food along the North-South line, check out our review of Shaker Lakers at Yishun! And if you’re in the area, here are 10 Ang Mo Kio Food Gems including lobster Nasi Lemak and huge bowls of prawn noodles! 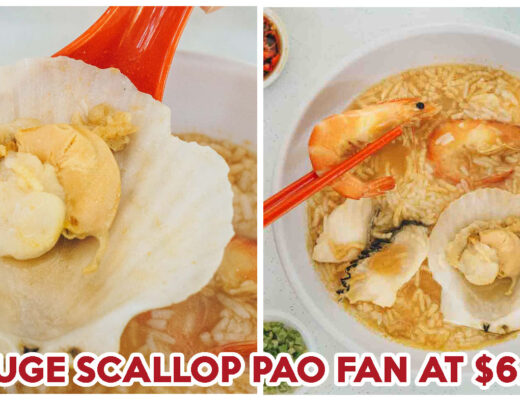 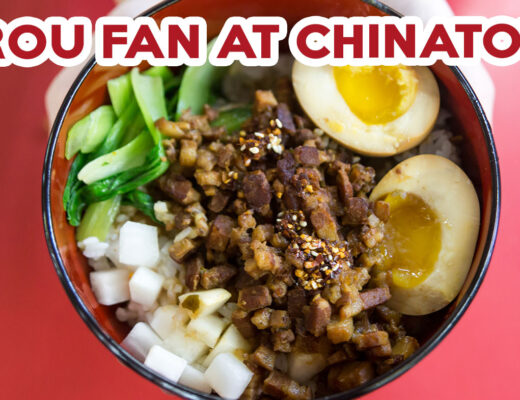 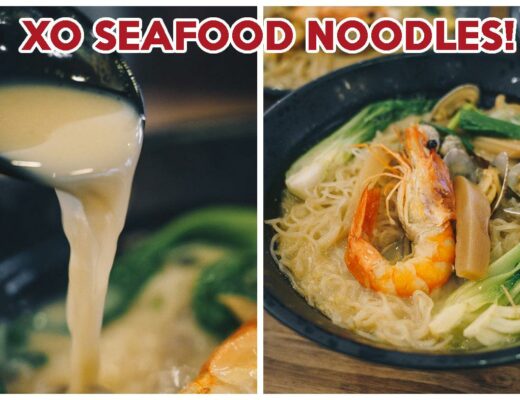