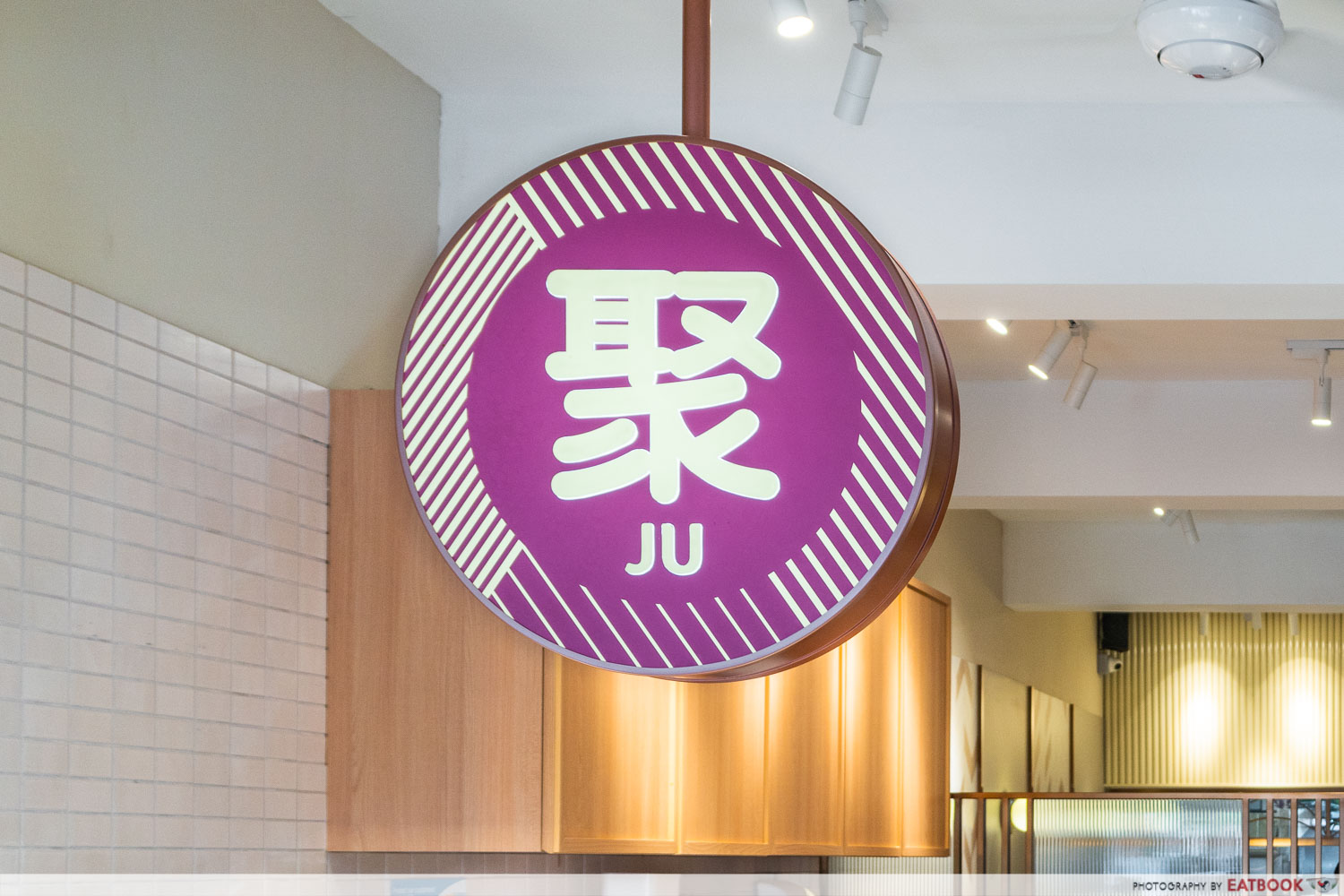 As someone who has frequented Serangoon Gardens all my life, the thought of it brings to mind hearty lunches at its Market & Food Centre or late-night suppers at Chomp Chomp. And so the chance to enjoy inventive, modern dim sum dishes in the area was a welcome change of pace.

JU Signatures is the brainchild of Chef Wong Kok Shyong, who has worked at hotels such as The St. Regis Singapore and JW Marriott Jakarta. His last post was at Peony Jade, where he was Group Dim Sum Chef for 15 years. With a CV like that, we made sure to arrive at the restaurant with empty stomachs, so as to savour as much of his dim sum creations as we possibly could.

20 Dim Sum Places In Singapore From $1.30, Including Halal Dim Sum And Buffets 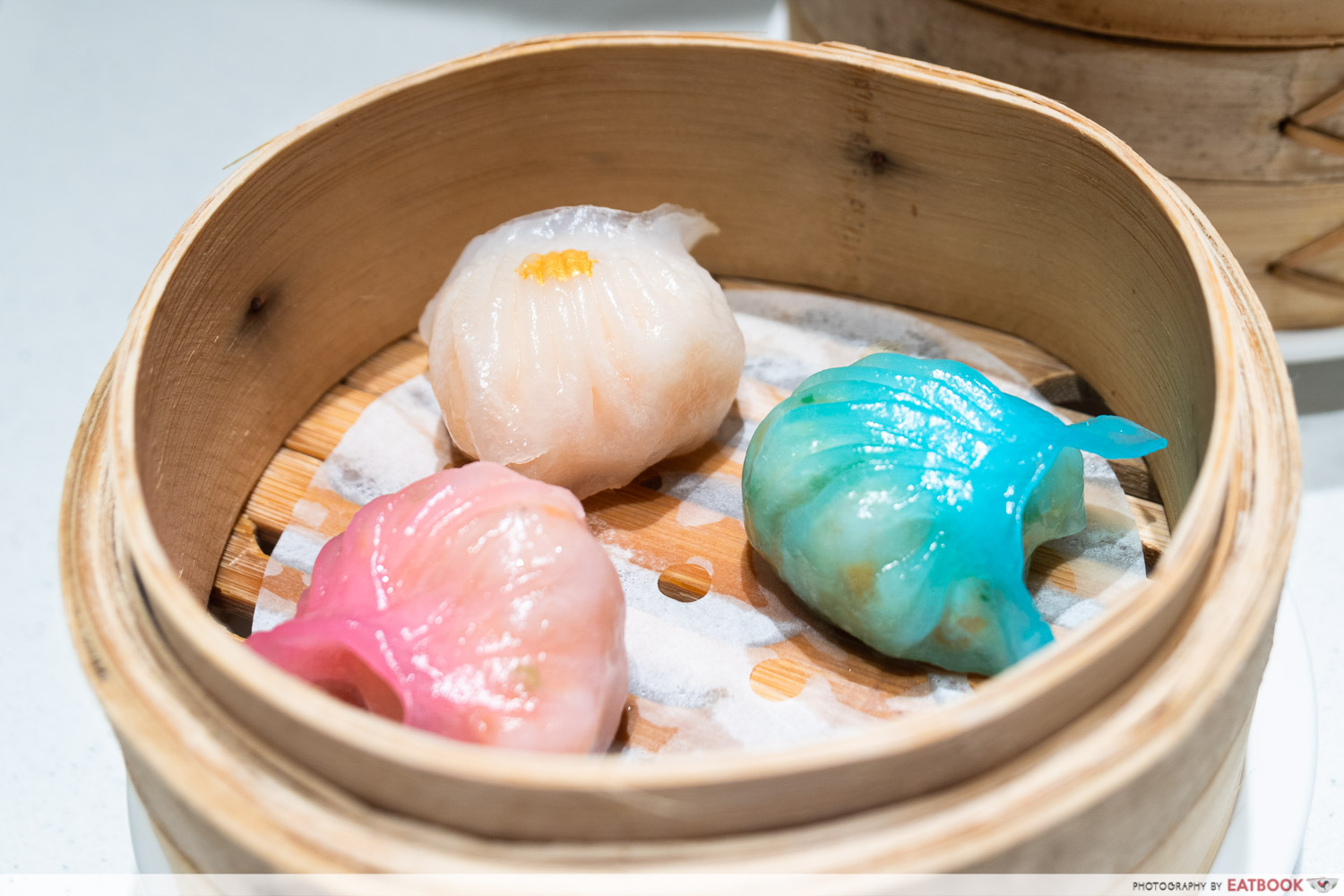 JU Signatures has a good mix of dim sum classics and more imaginative picks, but our menu for the media tasting was primarily focused on the latter. The first dish, Har Gao Gems ($7.80++), was emblematic of this: three prawn dumplings in a basket, one of which was the usual har gao but with edible gold flakes, while the other two had more peculiar characteristics. 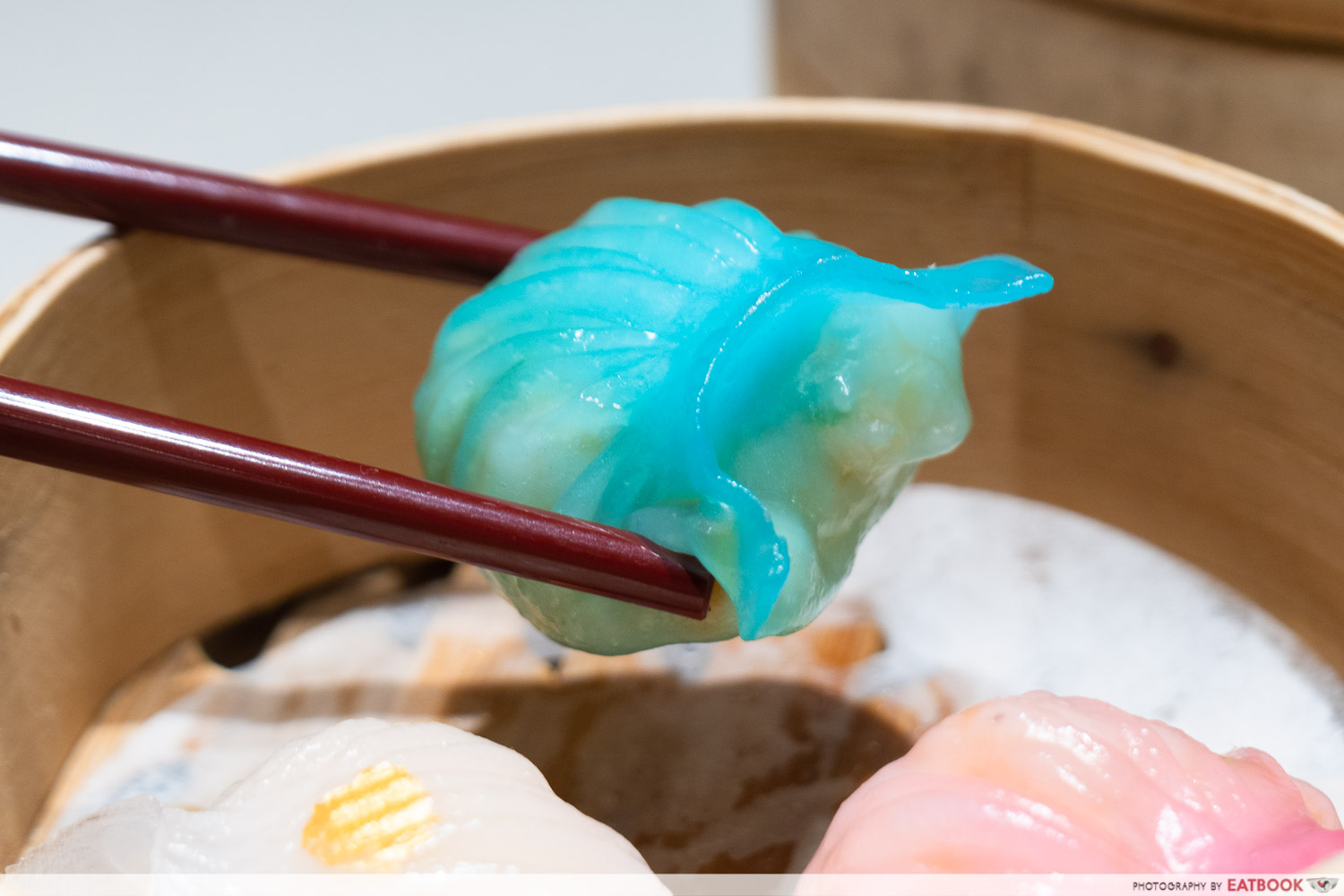 Both the blue and pink har gao are stuffed with prawn, but the former also featured crabmeat, while the latter had grouper fish. These unique additions added a little more umami to the dumplings, but it was the consistently juicy prawns that truly impressed. 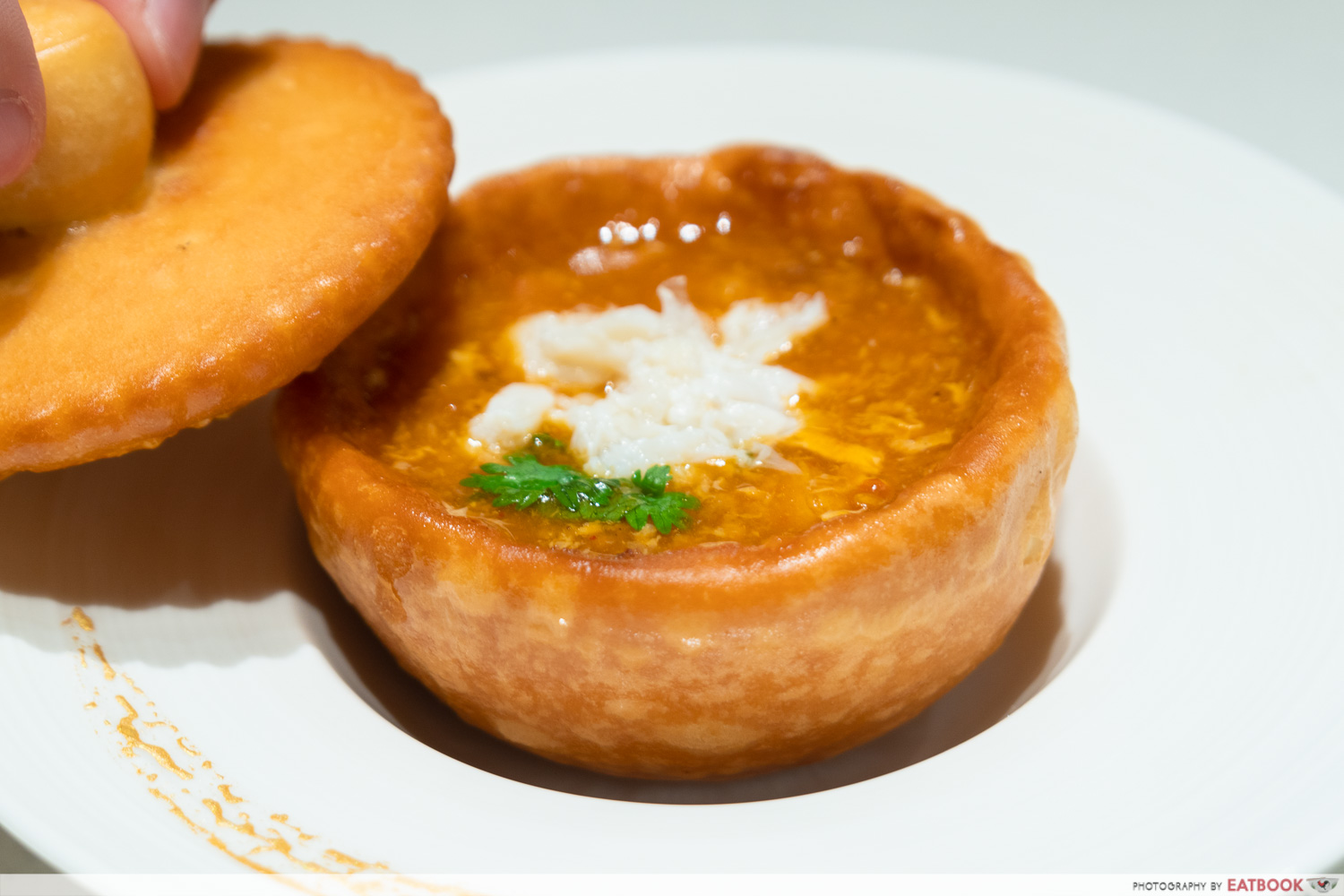 For all the innovation, the har gao tasted great as their fundamentals remained true to the original dish. This next item, however, was superb because of its innovation. The Wok-fried Chilli Crab In Mantou Tureen ($8.80++) is literally a tureen-shaped mantou with a removable lid, containing bits of crab meat in a rich chilli sauce on the inside. 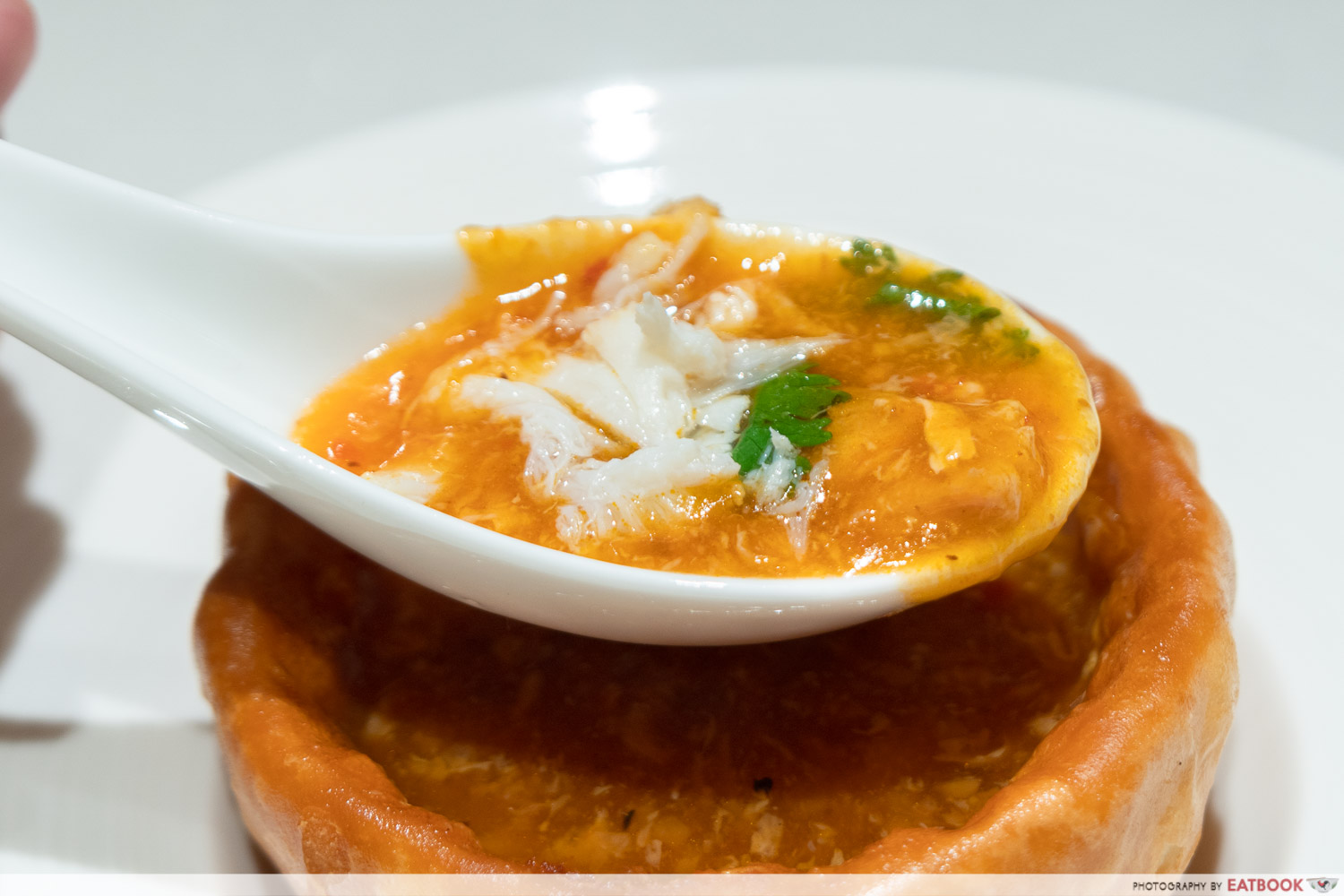 It’s a really convenient way of enjoying chilli crab and mantou. You enjoy the chilli crab first, and then the crispy mantou after, which by then is thoroughly soaked with chilli sauce. The sauce itself is on the sweeter side of things, as Chef Wong seeks to appeal to a wider target audience—those with a low spice tolerance will be pleased to hear this, but personally, I did wish it had more of a spicy kick. 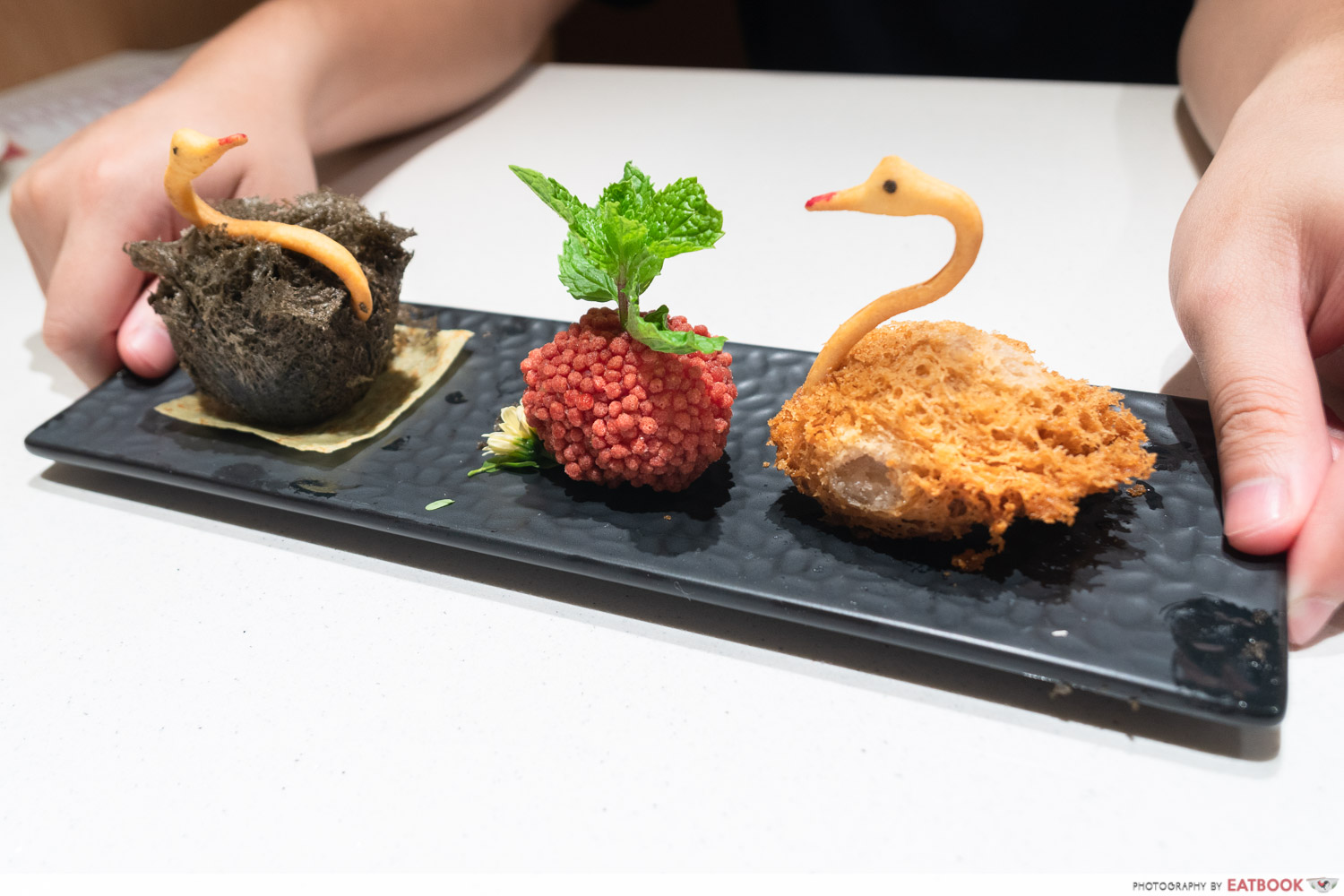 Then there’s the Yuan Yang Love Swans with ‘Lychee’ Ball ($10.80++), which goes one step further with food sculpting. 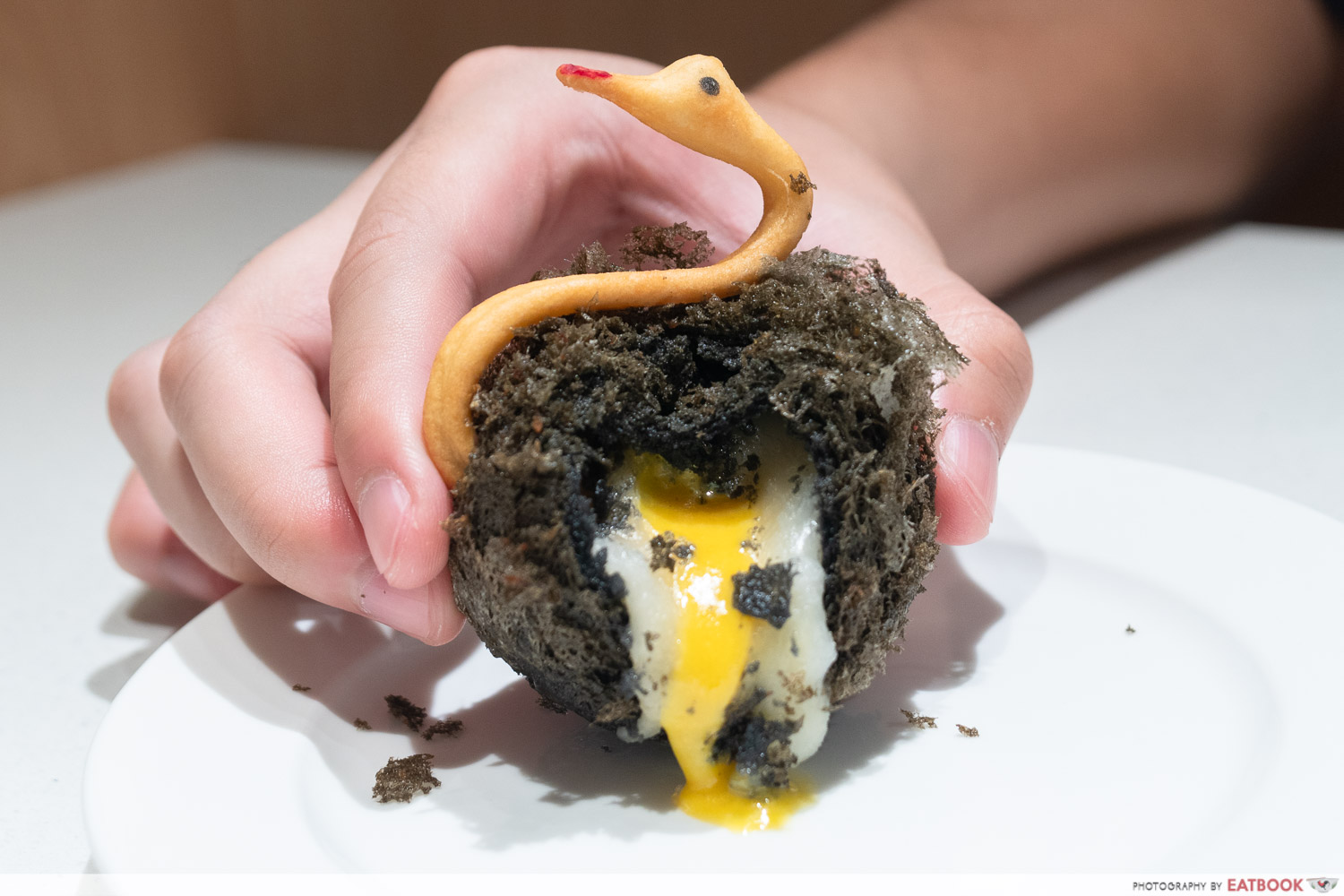 The black swan is liu sha bao at its core, but surrounding it is a layer of mochi and a black, flaky exterior. It’s the best of the three items on this plate, as the salted egg lava was delightfully sweet and salty, and the mochi’s sticky texture was delightful.

Unfortunately, the other two items weren’t as delicious as they were pretty—the golden swan contained chicken and mushroom, but flavour-wise, it paled in comparison to its companion; the ‘lychee ball’, which was actually a prawn ball with a keropok-esque skin, got jelak really quickly. 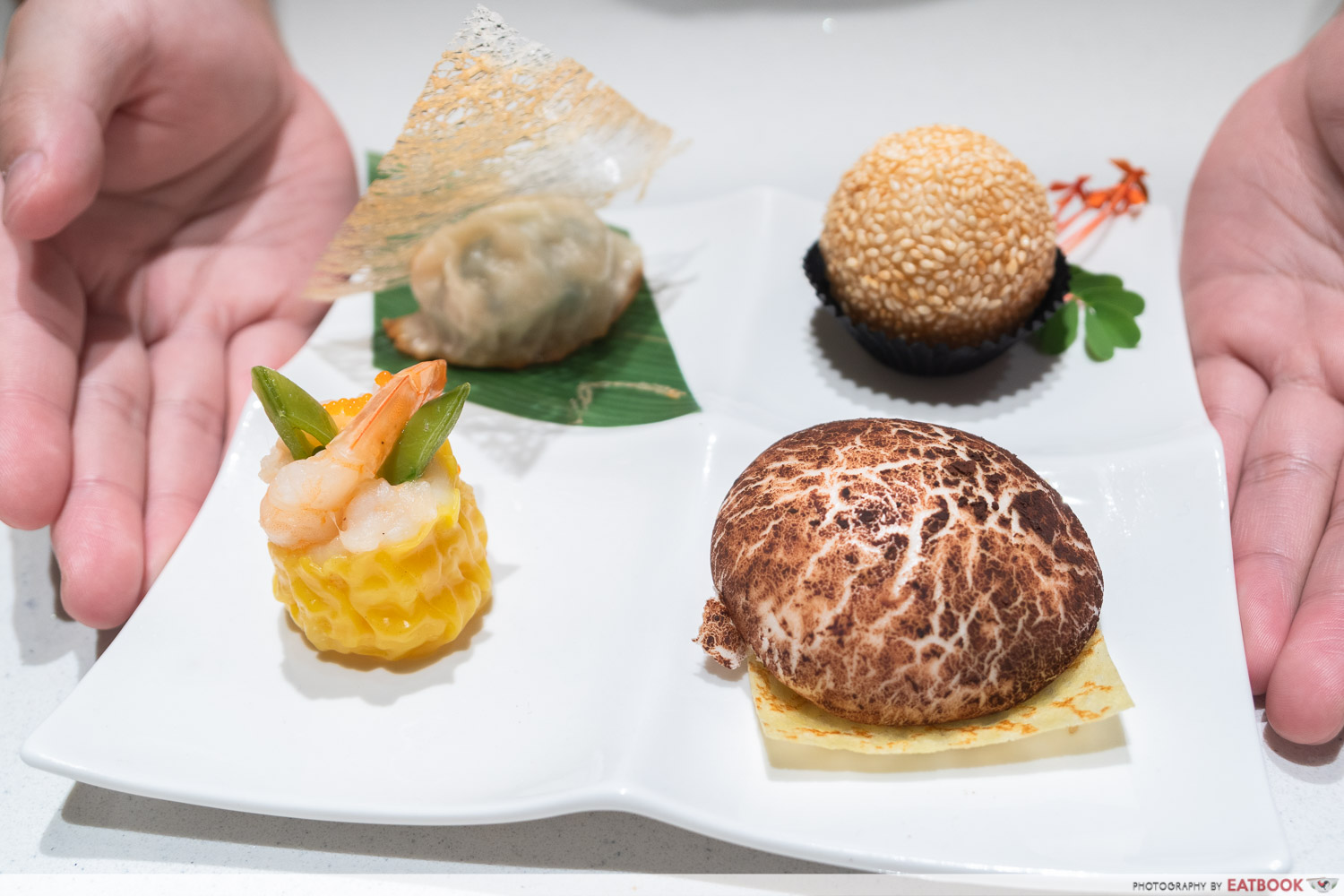 Fashioned to look like petit fours, this collection gave us a taste of the restaurant’s finest dishes, without having to order them in their usual sharing baskets. The mushroom pau was  perhaps the most noteworthy, especially with six types of mushrooms inside of it. Its overwhelming earthy taste soon became cloying, however. As for the other three items, they were well-executed with small stylistic flourishes—see the siew mai and its ‘wings and tail’. 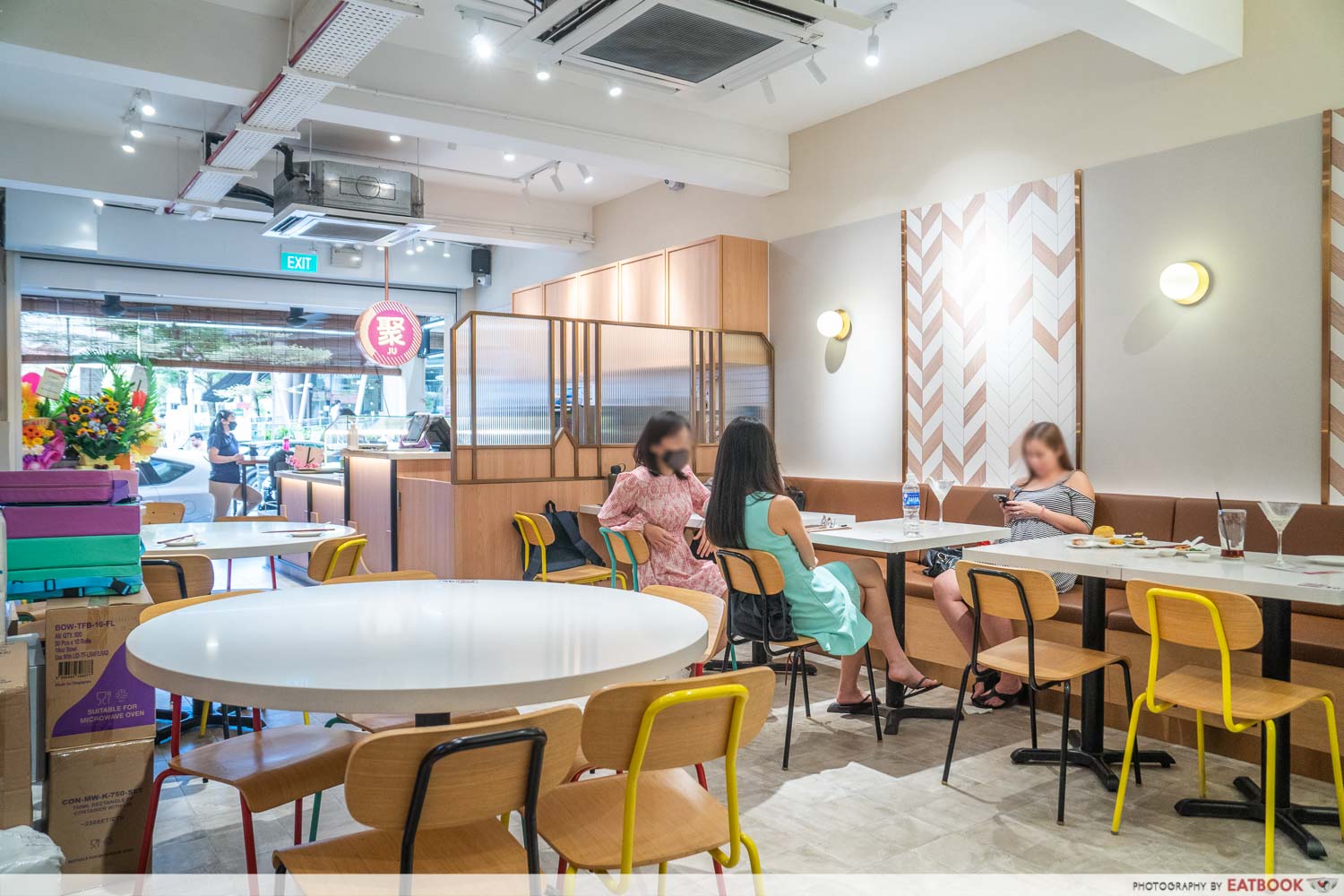 JU Signatures is a modestly-sized eatery decked out in a cream and gold colour scheme. Its vibe is closer to a cafe than a restaurant, making it a cosy environment for enjoying these amusing dim sum dishes. There’s also a window pane that allows you to peer into the kitchen and watch Chef Wong and his crew in action.

The dim sum place is a six-minute bus ride from Serangoon MRT Station.

Chef Wong’s dim sum creations come from a place of skill and experience, as evident in the more conventional dishes, which were generally fine renditions. However, the ‘creative’ picks were more hit-or-miss, and did not always live up to their showy appearances. If you’re visiting JU Signatures for the first time, we recommend you start with the classics before moving on to the adventurous items.

Photos by Enze Kay and Melvin Mak.
This was a media tasting at JU Signatures.

– Unusual colours aside, the har gao were excellent
– Chilli crab mantou was both fascinating and delicious
– Quintessential Four was a great way of sampling the restaurant’s specialities

– Yuan Yang Love Swans was did not taste as good as it looked
– Despite its interesting filling, the JU 6-Mushroom Vegetarian Pau becomes too cloying 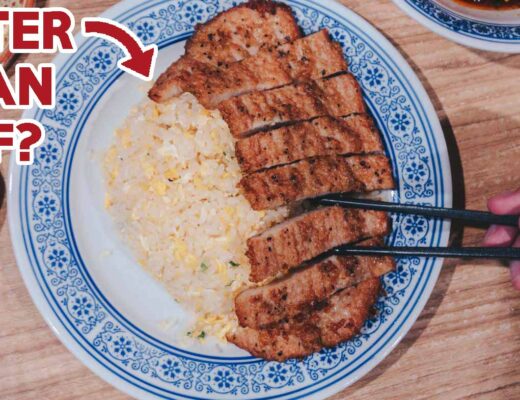 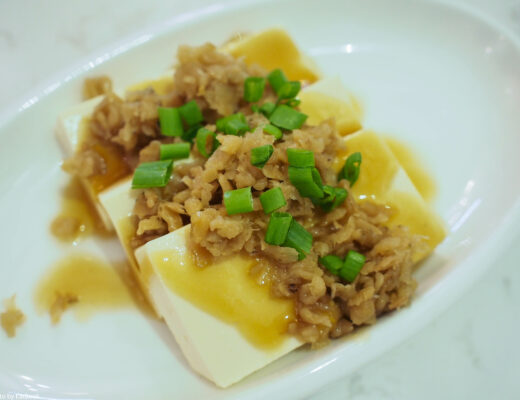 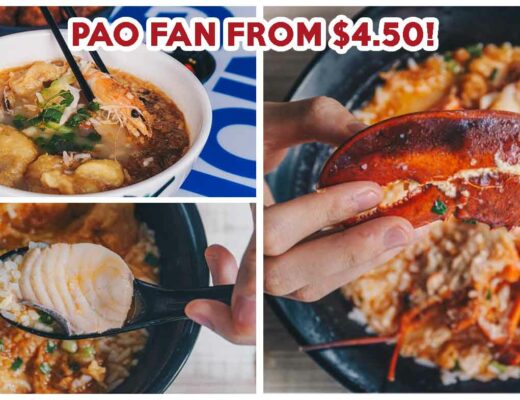