Sanrio fans have something to look forward to yet again, now that the Gudetama x Bad Badtz-Maru cafe has come to the end of its run. This 19 November, Kumoya brings us yet another exciting collaboration in the form of a pop-up cafe, featuring Little Twin Stars Kiki and Lala! 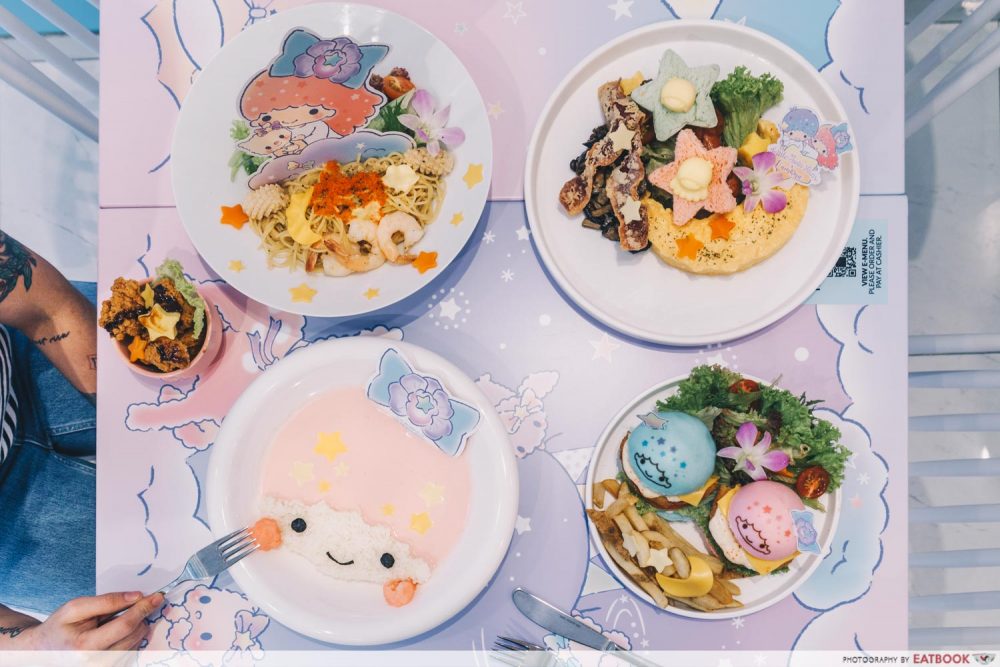 This new Little Twin Stars cafe is better known as the Orchid Starry Dreamz Pop-up Cafe. It will run for three months from 19 November at Kumoya, along Jalan Klapa, where fans have previously been dazzled by Care Bears, Cinnamoroll and My Little Pony. The pop-up will end in February 2021. 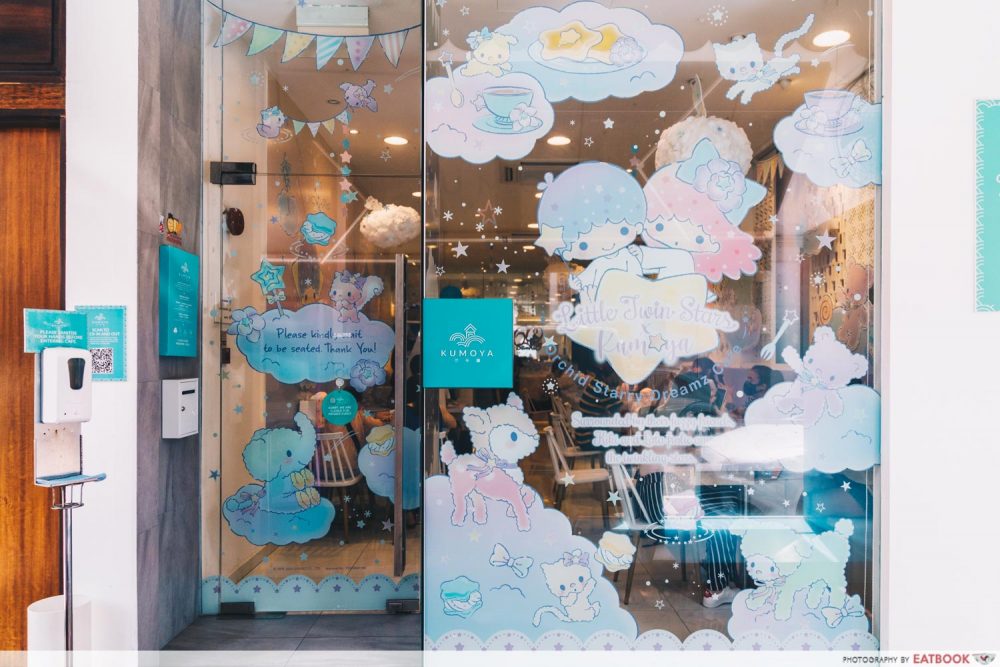 Expect to be wowed by menu creations from award-winning bento artist and blogger Little Miss Bento, whose adorable bento and food styling has won her widespread acclaim. She has previously helped design the menus for the Gudetama and My Melody cafes in Singapore, as well as at the previous Kumoya pop-ups. 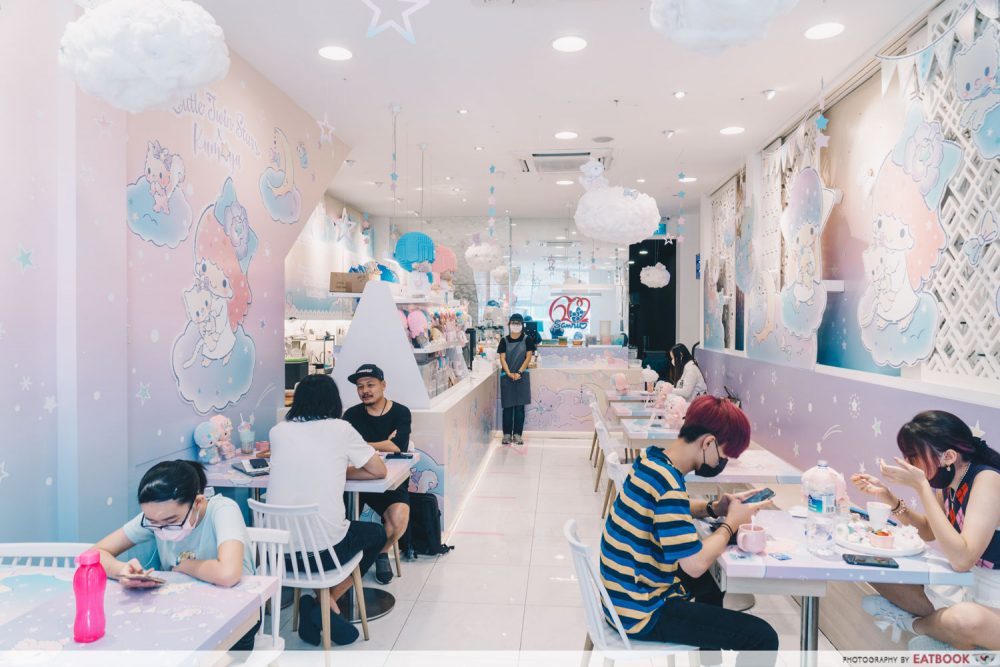 The menu at the Orchid Starry Dreamz pop-up cafe will feature a selection of six snacks, six mains, four desserts and seven beverages, priced between $10.90 and $26.90. 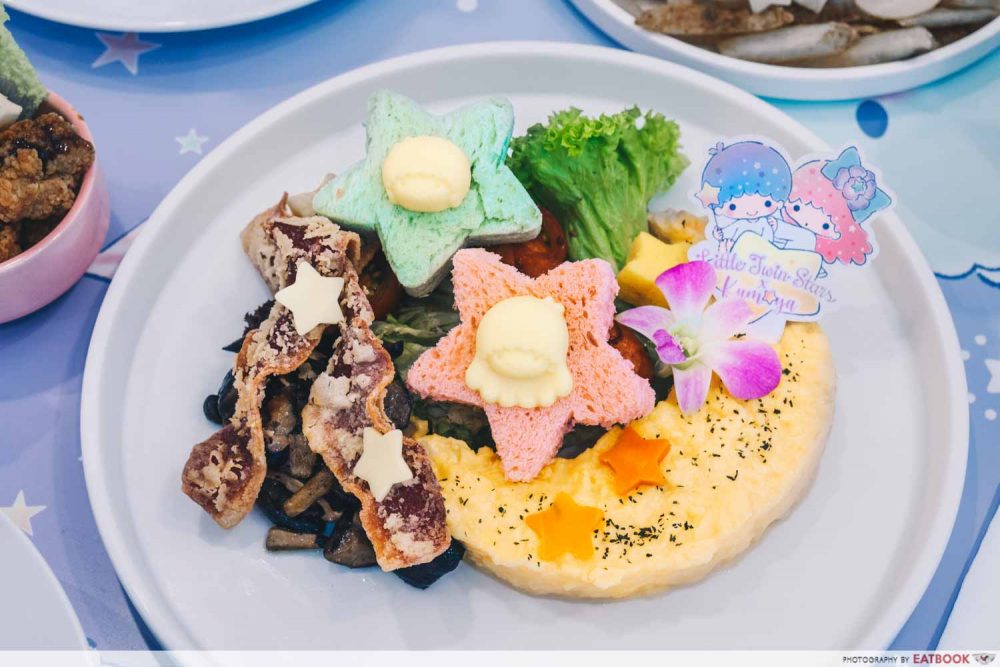 Top on our list of items to try would be the Little Twin Stars Magic Starry Breakfast ($26.90), which comes with two absolutely pretty pastel pink and blue star-shaped slices of toast. These come with pats of butter moulded in the shapes of Kiki and Lala’s faces, with scrambled eggs in a crescent on the side. 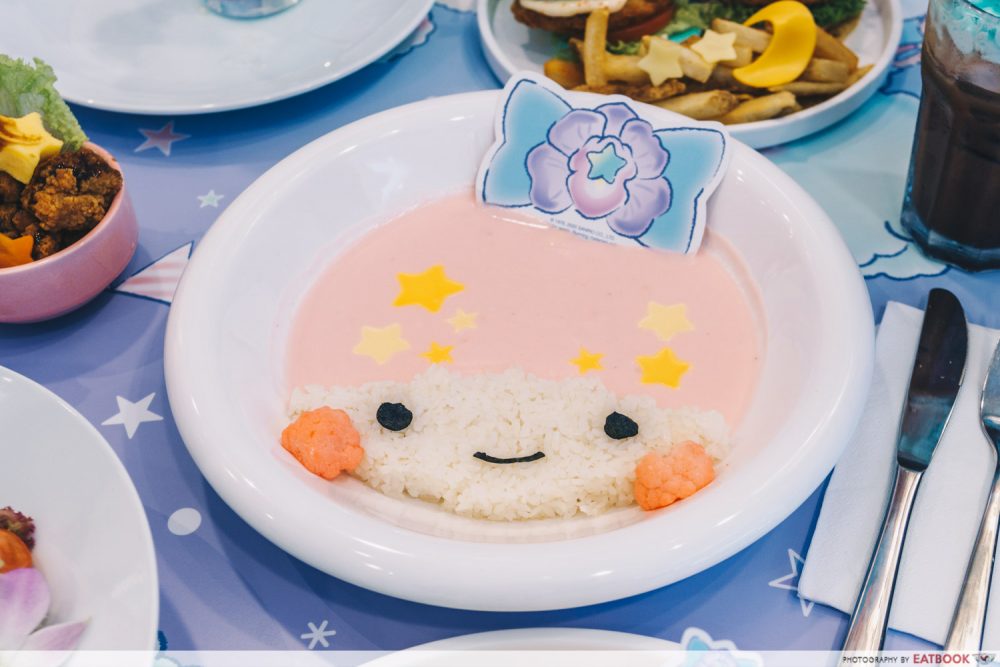 Another savoury must is the LaLa Karaage Chicken With Beetroot Cream Sauce ($23.90), where a beetroot sauce, reminiscent of comforting Campbell’s soup, is accompanied by fragrant pearl rice and karaage chicken. 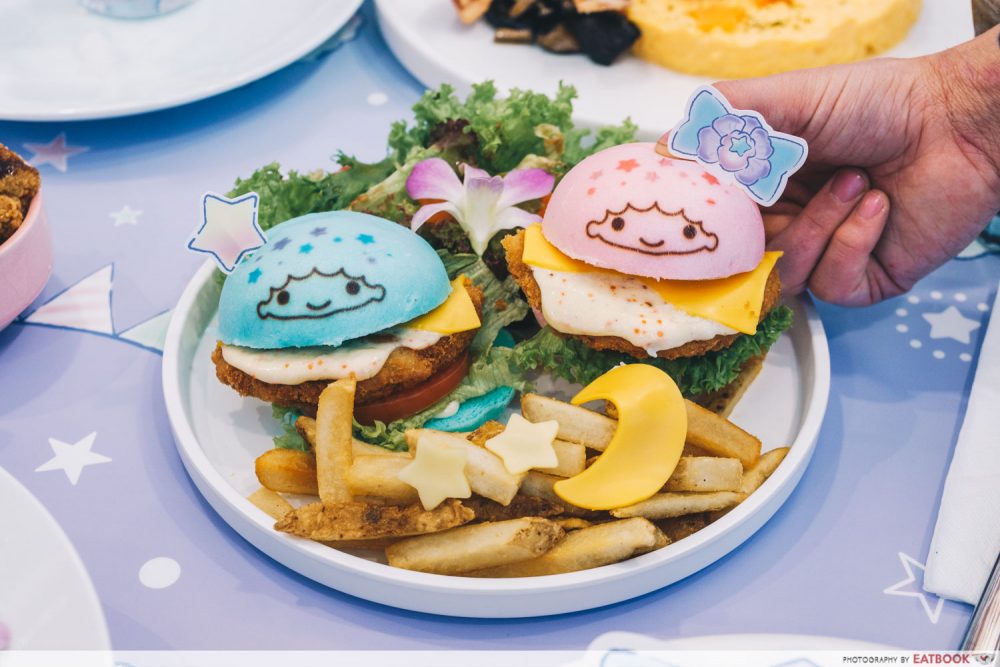 If you prefer a burger, try the Little Twin Stars Double-Double Sliders ($26.90), where a blue and pink duo of bao buns nestle salmon katsu patties, and mayonnaise with fish roe. There is also pasta on the menu, of which we tried the Seafood Aglio Olio ($23.90), available in both spicy and non-spicy versions. 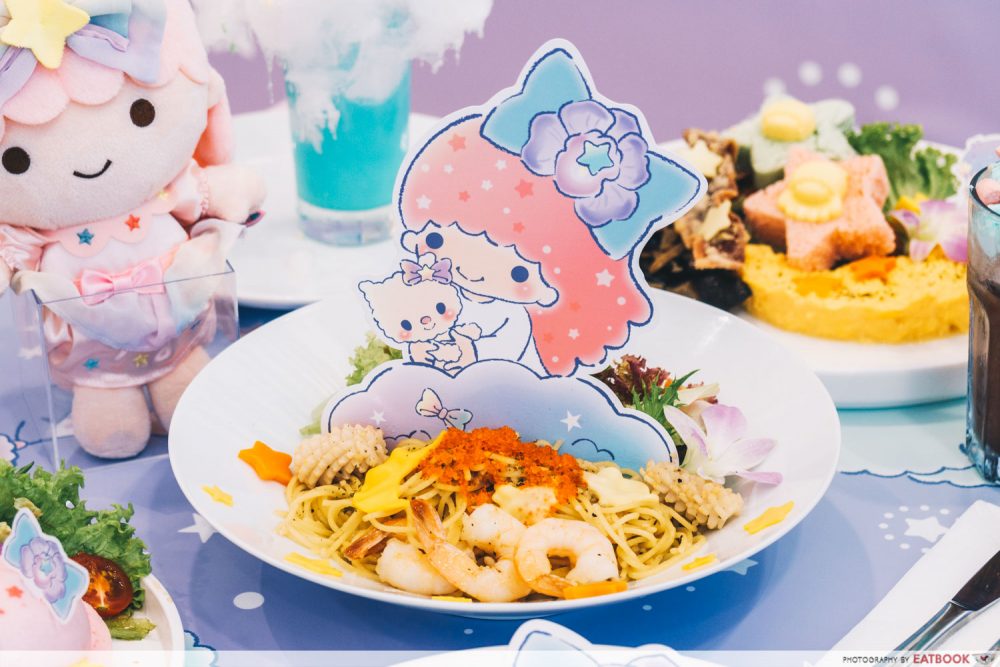 Accompanied by seafood and celestial cutouts made from cheese, this beautiful dish fell a bit short, as it was much too salty. 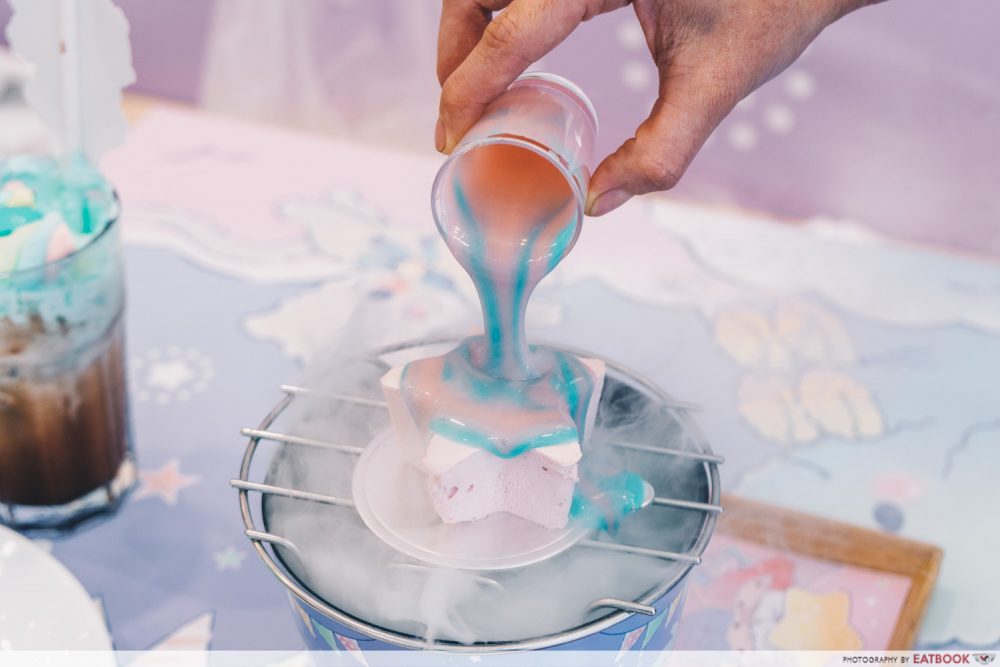 On the dessert front, the Magic Starz Galaxy Cake ($21.90) allows you to glaze your very own galaxy cake that’s shaped like a star. It comes with fresh fruit, a Hokkaido milk soft serve, and dry ice for that IG-worthy snapshot! 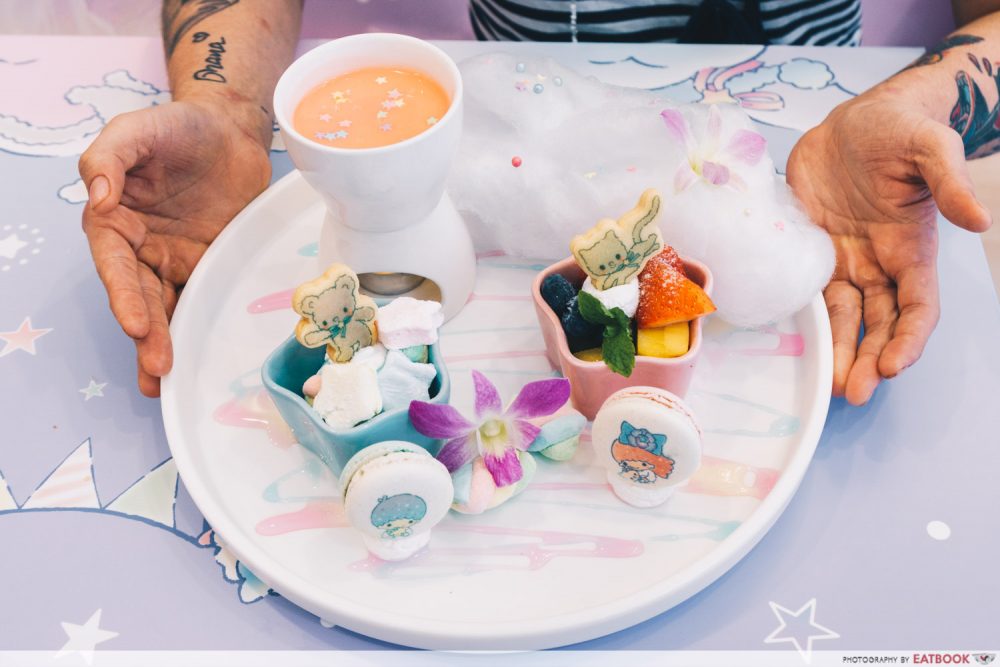 For more picture-perfect moments, try the Starry Stars Sweet Pink Fondue ($24.90), where two bowls of fruit and marshmallow each are made to be dipped into a pink strawberry chocolate sauce. 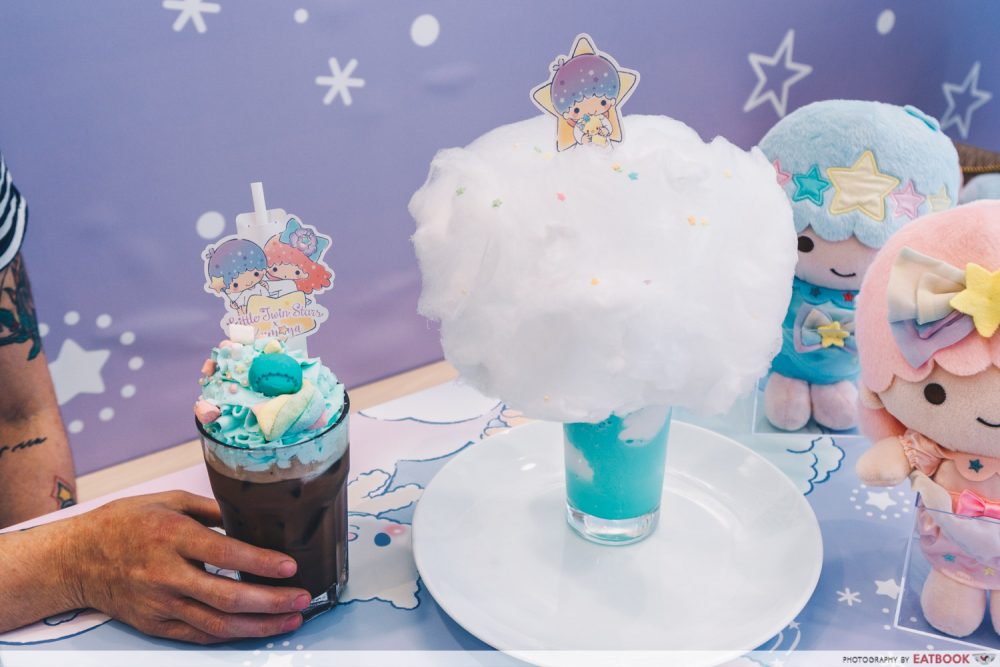 For beverages, the LaLa Fluffy Cloud Vanilla Frappe ($13.90) appears to be served with a huge cloud of cotton candy, speckled with pastel, candy-hued little stars, and a Little Twin Stars coaster that you can bring home. 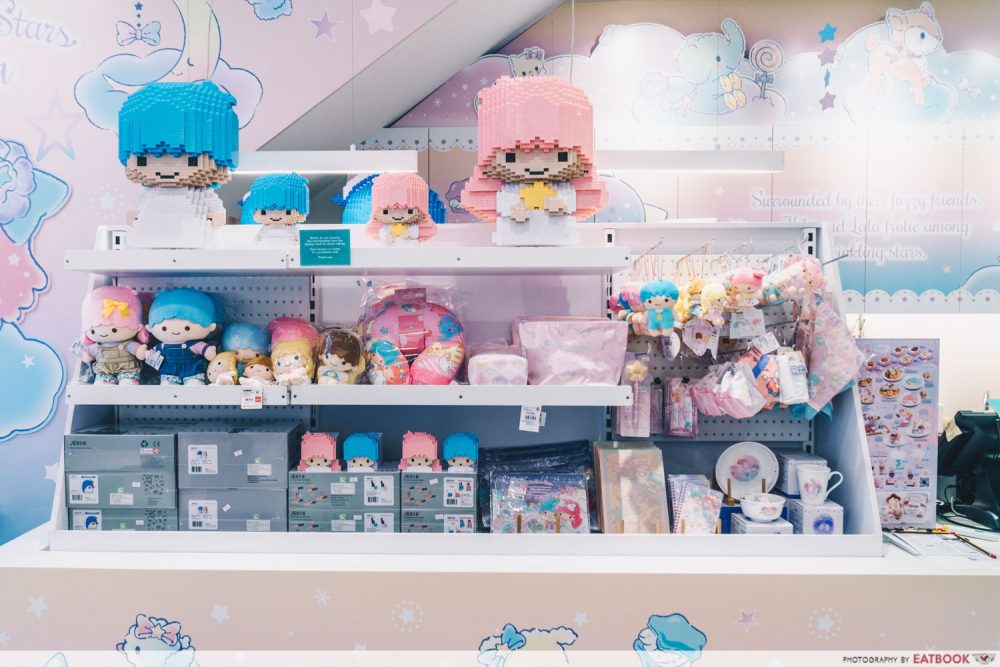 In honour of Singapore’s national flower, the Little Twin Stars decorated across the space have woven orchids into their outfits, especially for this pop-up cafe.

The cafe itself is also decorated with Little Twin Stars murals, with a twinkling soundtrack to transport you to the characters’ magical realm. Customers can also take home souvenirs from their time at the pop-up, as there is a merchandise display that sells trinkets like stuffed toys, keychains, and stationery, from $1.90.

The Orchid Starry Dreamz pop-up will run from Tuesday to Sunday, from 12pm to 9:30pm daily. Make your reservations via WhatsApp at 9244 3382 soon, because we expect it’ll be popular.

If this was too cutesy for you, Southeast Asia’s very first Jurassic World Cafe has also just opened its doors today, till 3 January 2021. 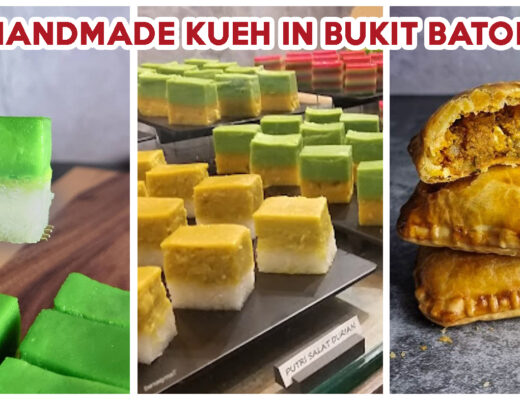 Chorong Pocha Has Soju Buffet From $35++ Per Pax, Has Free-Flow Mandu And Corn Dogs 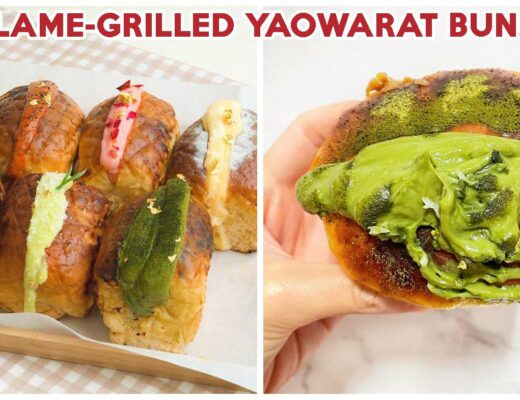