Western food stalls are a dime a dozen in most food courts, but their heritage counterparts are harder to come by. These old-school stalls are blasts from the past still going strong, serving up nostalgic, XXL chicken cutlets, chicken chops, fries, and the quintessential gravy we all know and love.

If you want to revisit your childhood, head down to any of these old-school Western food stalls for your lunchtime fix. Some of these have been around for decades! 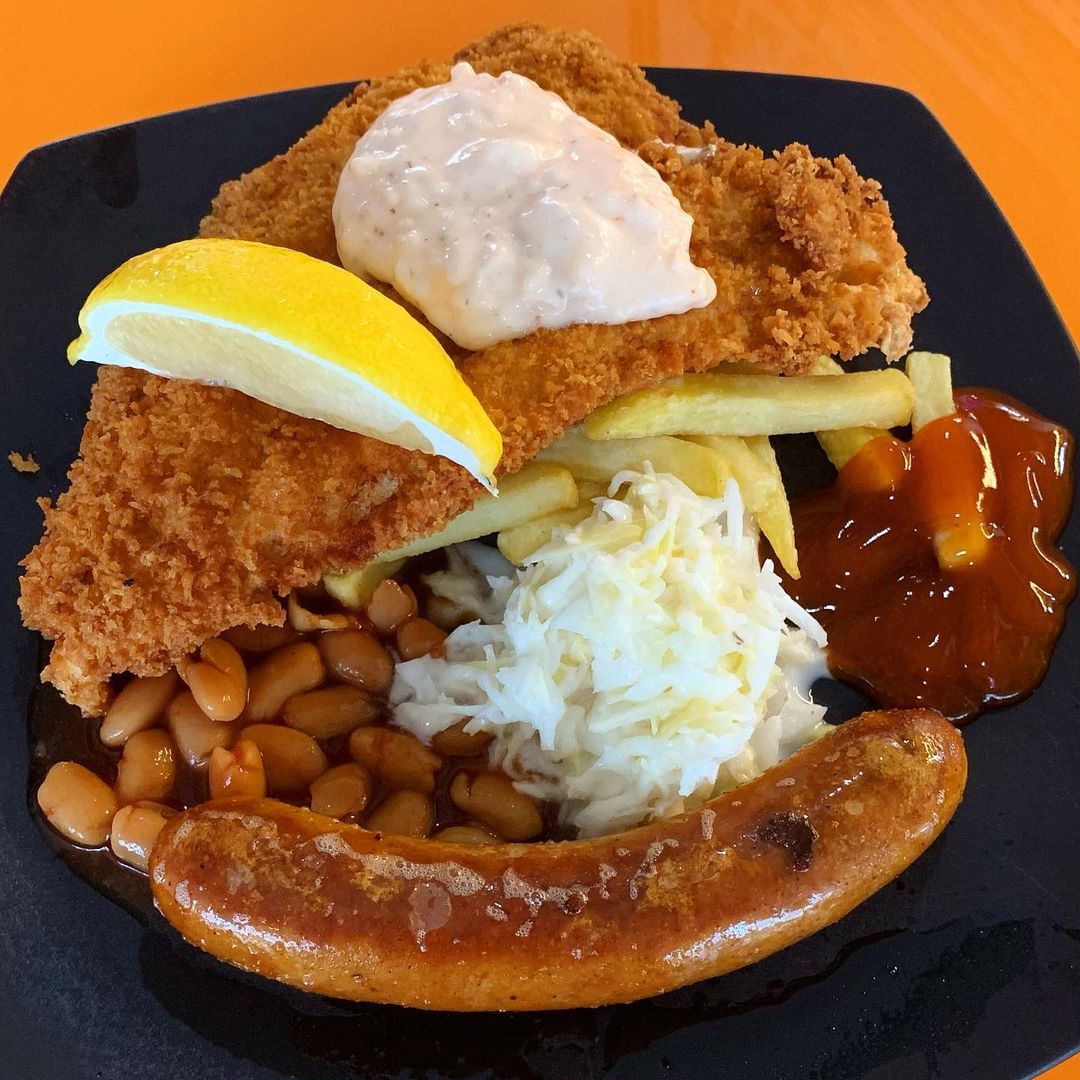 Wow Wow West at ABC Brickworks Food Centre draws its fair share of loyal customers, who flock to the stall for their huge portions under $8. Though the stall isn’t technically a heritage eatery as it’s run by a young couple, the menu nonetheless pays homage to old-school Western food. Try the Fish & Chips ($8), where a massive deep-fried fish cutlet is topped with crispy fries, baked beans, and slaw. Tanglin Halt Food Centre is on the cusp of closing, so you have limited time to get your hands on Chef Hainanese Western Food’s dishes, especially since the stall only opens for two hours a day. They specialise in Hainanese-style Western grub that fans tout as truly nostalgic. Try their Mixed Grill ($10) for an all-in experience. This is served with chicken sausage, fish fillet, chicken chop, pork chop, a fried egg, and a medley of sides, including baked potato. Otherwise, the other mains on the menu are priced from $5. 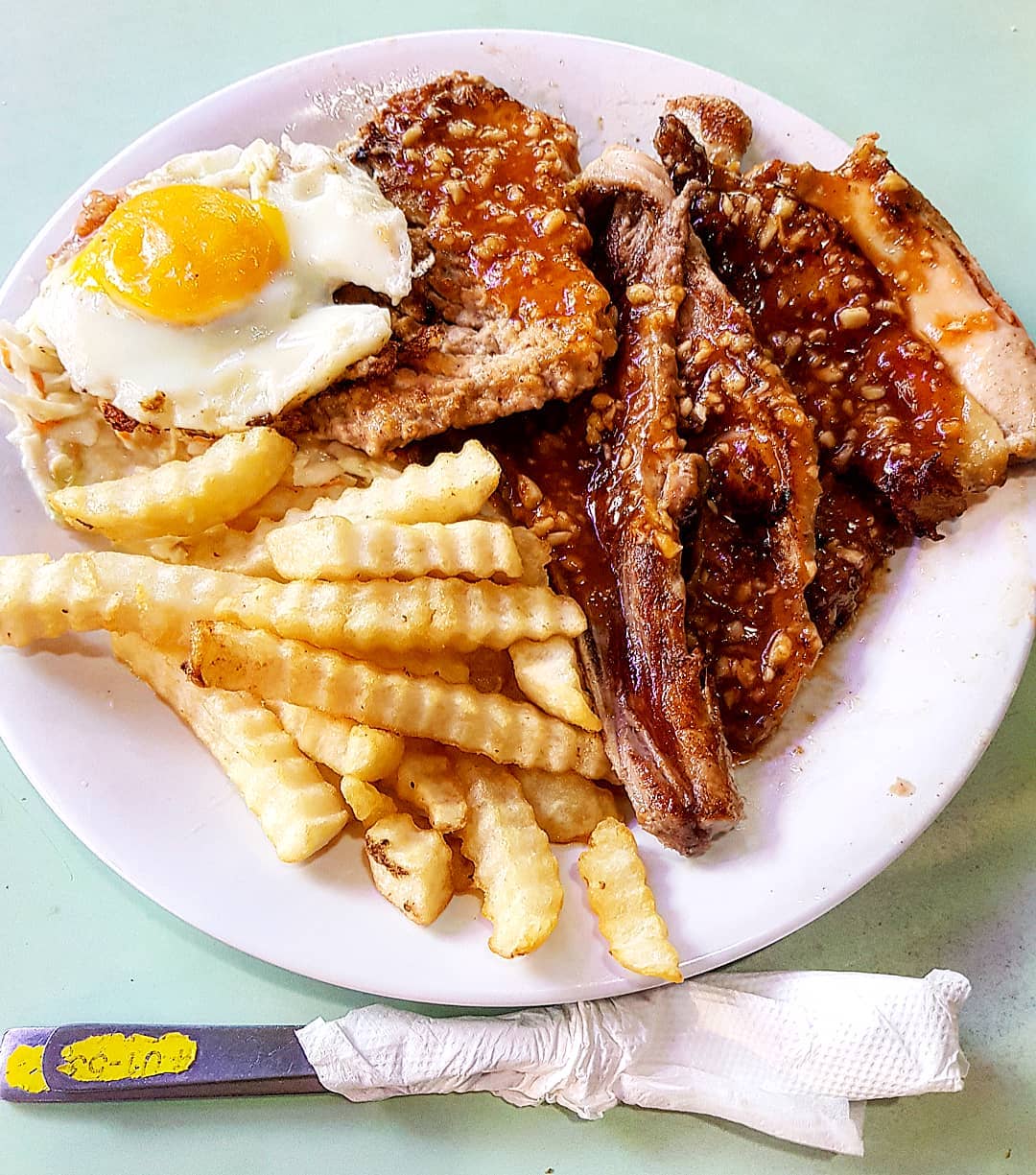 Nestled amongst the Old Airport Road Food Centre sprawl is Western Barbeque, a stall that has been around since 1974. Long queues are to be expected here, as many fans come for the popular Chicken Chop ($6.50), which is served with a garlic sauce instead of your usual brown gravy. The garlic sauce is made with more than 10 ingredients, from a secret recipe that has been around for decades. The chicken itself is marinated well too, so it remains juicy even after cooking. Maxwell Food Centre’s flagship old-school Western stall is so well-loved, some dub it the best Western food in Singapore. Ye Lai Xiang Tasty Barbeque has been around since 1976, and has been serving up XXL portions of their Hainanese-style Chicken Chop ($7.50) and Pork Chop ($7.50) since their heydays. The recipes here hail from when the founding owner was a cook in the British Navy, so expect rich gravy, marinated meats grilled with just the right amount of char, and generous servings of sides. Diehard chicken cutlet lovers should try out the dish from Apollo Western Food. The stall has been running for 35 years now, and their Chicken Cutlet ($6) remains a best-seller. Though deep-fried to shatteringly crisp ends, the cutlet still manages to remain tender in the middle. The crinkle-cut fries and baked beans make for simple sides, along with the house-made sweet buns that aren’t also deep-fried, so you keep the jelakness at bay. 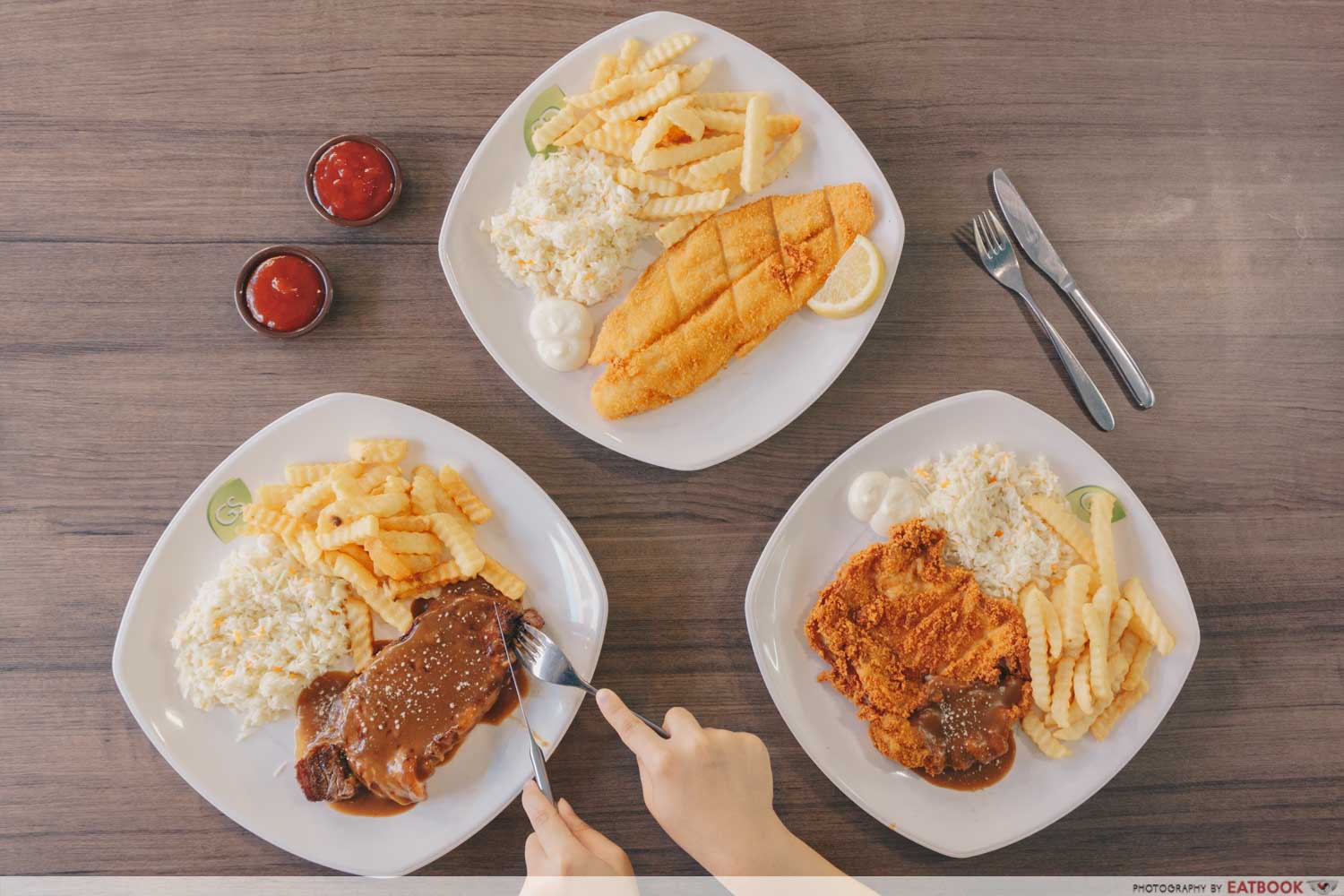 Tip Top Western Food is a family-owned hawker business that is now three generations strong. The recipes have all remained in the family across the generations, though the menu has had updates since its early days in the form of their Prawn Aglio Olio Spaghetti with Mushroom ($5), and Cheese Fries ($3.50). Order their Steak if you’re looking for value-for-money, as this hefty cut of meat goes for just $8, with fries and coleslaw on the side. 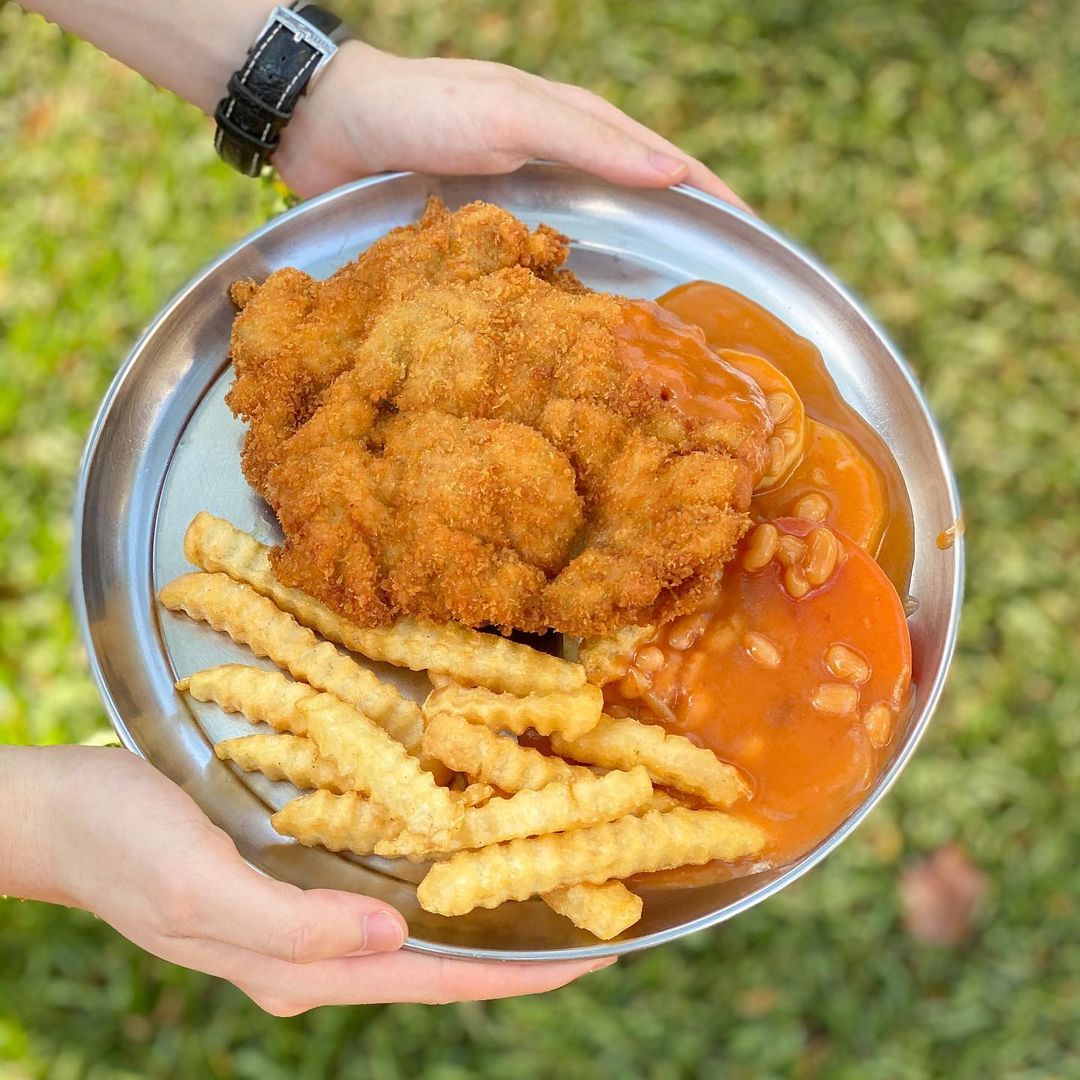 Another Tanglin Halt gem is No 1 Western Food, which has been running for almost 50 years now. The large plates here are served simply with one main protein, baked beans, fries, tomatoes and cucumbers. There are only six items to pick from: Chicken Chop ($6), Lamb Chop ($7), Chicken Cutlet ($6), Beef Steak ($7), Fish & Chips ($6), Pork Chop ($6), and Sausage & Egg ($3). The gravy here is also tomato-based, so it is much sweeter than your usual brown sauce. 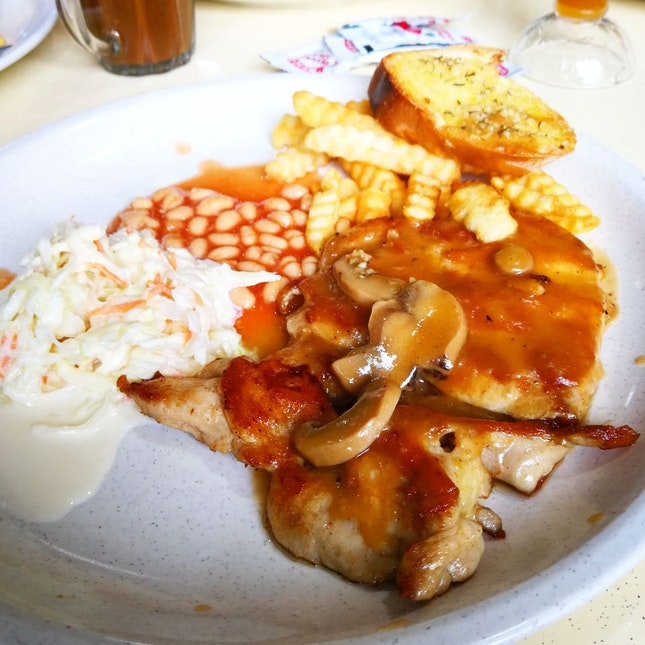 Whether you call it the S-11 AMK Western Food Stall, or Rasa Sayang Western Food, there’s little doubt that this hawker gem is beloved by Ang Mo Kio residents. The stall constantly attracted long queues during their prime, but after a change in owners, the food just didn’t taste the same.

The OG owners have recently returned, though, and reopened another Rasa Sayang outlet at Ang Mo Kio Blk 347, operated by the same old staff, with the same delicious recipes. 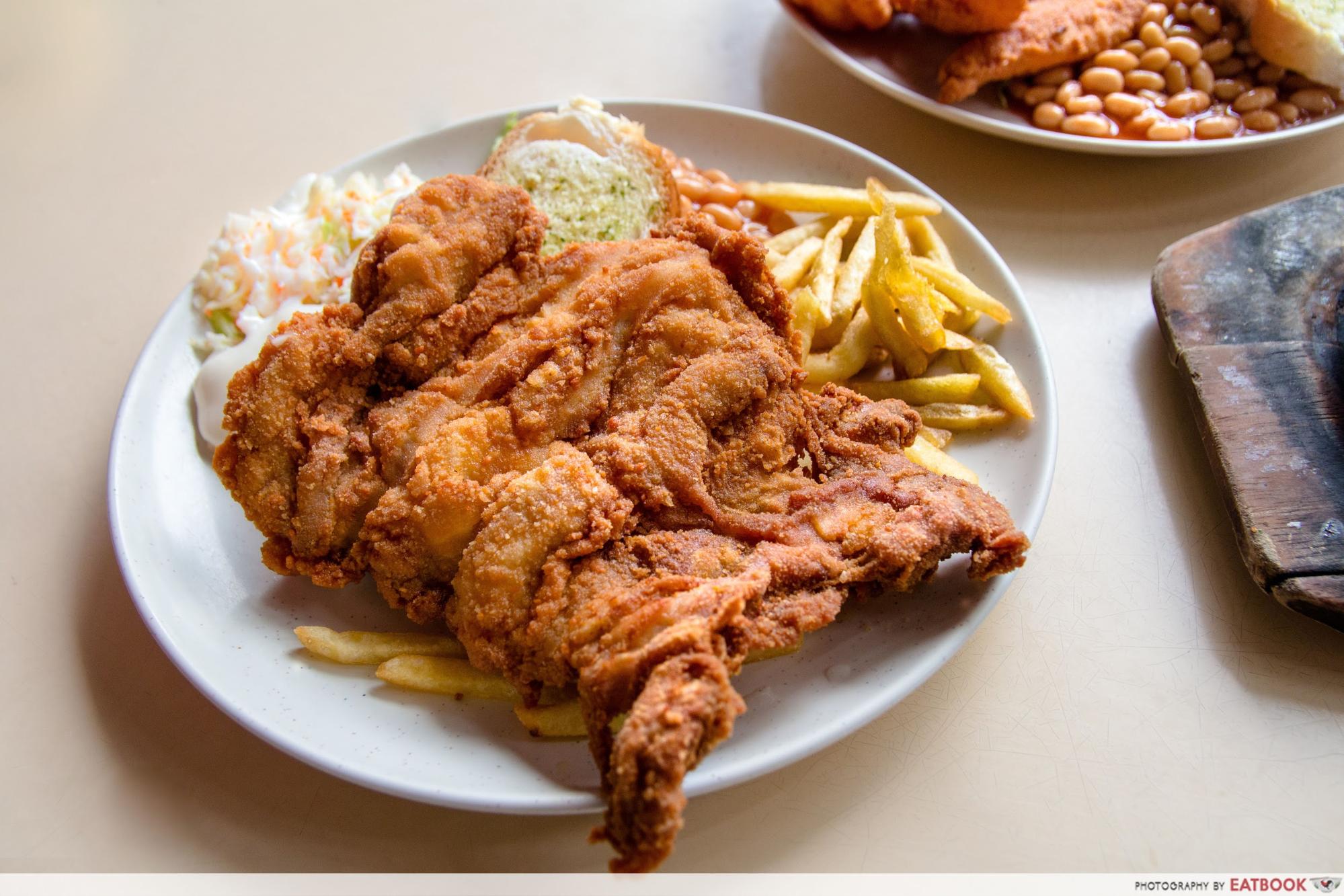 If it’s XXL portions of old-school Western food you’re after, then dine at Hougang’s 5 Star Corner. The stall offers homely dishes loaded with sides, at very affordable prices. The Chicken Cutlet is the signature, where for $6, you can get a cutlet larger than your hand, accompanied with chunky cut fries, a heaping mound of slaw, garlic bread, and baked beans. Another highlight is their Black Pepper Steak ($9.50), where a sizeable steak is served with black pepper sauce on a sizzling hot plate.

If you have a craving for the Western dishes from your childhood, then visit these old-school stalls. For more hawker eats, check out our lor mee guide, and our chicken rice guide!

11 Lor Mee Stalls In Singapore From $2.80, With Toppings Like Cod Fish, Braised Duck, And Meatballs 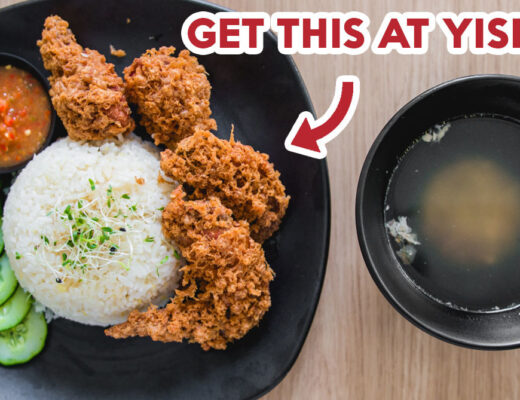 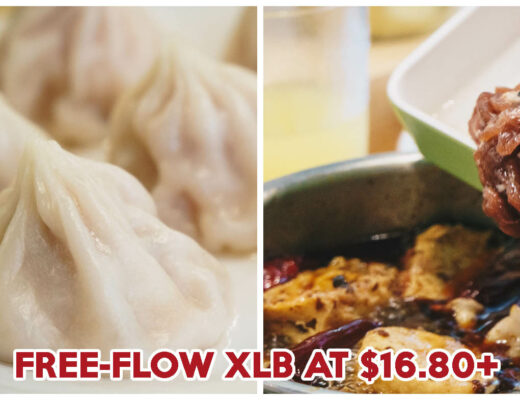 11 Restaurants For Fresh Oysters In Singapore, Priced From $1 Apiece